President Obama’s position has been stronger in state polls than in national surveys on recent days, a streak that extended itself in Thursday’s polling.

Although Mr. Obama got a distinctly poor poll in Florida, which showed him seven points behind there, the rest of Thursday’s state-level data, like a series of polls by Quinnipiac University and Marist College, were reasonably good for him. In surveys of competitive states that were released over the course of the day, he held the lead with 11 polls to Mitt Romney’s 6.

However, four of the six national tracking polls moved toward Mr. Romney, who also led by one point in a national poll published by Monmouth University.

The case that Mr. Romney’s bounce is evaporating after his debate last week in Denver continues to look a bit thin. The tracking polls aren’t perfect by any means. Some are better than others, but they are a below-average group of polls on the whole. But they do provide useful information about the day-to-day trend in the race, and so far they haven’t shown the sort of reversal that Democrats might have hoped for.

Still, the broader group of polls was slightly more equivocal on balance than earlier in the week; the FiveThirtyEight forecast model was about ready to call the day a draw until the publication of the Florida poll, which tipped things toward Mr. Romney. His probability of winning the Electoral College advanced to 33.9 percent from 32.1 percent in Wednesday’s forecast, his highest figure since July 25.

Mr. Romney also gained in the FiveThirtyEight projection of the national popular vote, which is formulated from state polls along with national polls. The model now projects Mr. Obama to only about a one-point advantage in the popular vote and gives him a 62.6 percent chance of winning it, lower than his Electoral College probability of 66.1 percent.

But although we do perceive some advantage for Mr. Obama in the Electoral College relative to the popular vote, I would caution our readers against thinking that it’s all that robust.

The Florida poll, which was conducted by Mason-Dixon, a good polling firm, showed Mr. Romney with a lead and was a helpful reminder of this. Mr. Obama probably does not trail in Florida by seven points. Some other polls published this week showed him with a small lead there. But there is reason to think that he has become the underdog, since Mr. Obama led in Florida by two or three points before the debates and because Mr. Romney’s bounce since then has been a little larger than that. In fact, the FiveThirtyEight forecast had flipped to calling Mr. Romney a slight favorite in Florida a couple of days ago.

There is stronger evidence that Mr. Obama still leads in Ohio, since that state has been polled quite richly. But while recent polls that use traditional methodologies have shown Mr. Obama with leads of four and six points in Ohio, a series of automated polls have shown the race in Ohio as a near-tie instead. The FiveThirtyEight “now-cast” estimates that Mr. Obama would have a two-in-three chance of winning an election in Ohio held today.

Even if one grants Ohio to Mr. Obama, however, that would not seal victory for him. He would still need to win some other combination of states; his path of least resistance probably flows through Wisconsin, and then either Iowa or Nevada.

Iowa, in particular, is a crucial state that has been thinly polled all year. (The FiveThirtyEight model, in fact, calculates that Iowa is slightly more essential to the Electoral College than Florida, despite having many fewer electoral votes.) There has been just one poll of Iowa since the debates, and while it gave Mr. Obama the lead, it was an automated poll that probably does not merit too much weight.

Our forecast model is more bearish on Mr. Obama’s chances in Iowa than those of our competitors. The FiveThirtyEight “now-cast” does have him in the lead there, but only by 0.8 percentage points; other polling Web sites, by contrast, put his edge at between 2 and 5 points. The difference is that the FiveThirtyEight methods are inferring a decline for Mr. Obama in Iowa because of the deterioration in his overall national standing. 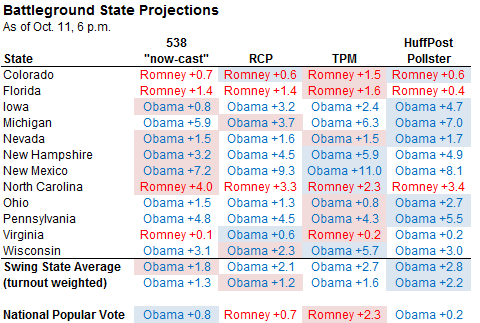 But could it be that the swing states are behaving differently than the rest of the country? Could it be, for instance, that Mr. Obama’s standing declined less in the swing states after the debate because voters there were already exposed to more information about the campaigns — meaning that the debate made less of a difference at the margin?

It’s a plausible case, but also one that, in my view, ought to be regarded as requiring more proof. The Florida poll is one instructive example of why this is the case.

Another might be what happened following the party conventions. After the Democratic convention in Charlotte, N.C., produced a large bounce for Mr. Obama, I heard the theory from some well-connected Republicans that it might be smaller in the swing states. The rationale was exactly the same as the ones Democrats are now giving: that voters there had been bombarded with information about the election all year long, and so were less likely to have their vote swayed by the convention speeches.

However, eventually Mr. Obama’s post-convention bounce appeared to be about as large in the swing states as anywhere else.

Finally, it might be remembered that the swing states themselves constitute a fairly large chunk of the American population. The 11 states that the campaigns have actively contested this year accounted for about one-third of the overall voter turnout in 2008.

There are a lot of swing-state voters in the national polls, in other words, and if they’ve moved toward Mr. Romney by a less-than-average amount, that puts even more of a burden on the other two-thirds of voters in noncompetitive states to have moved more toward him.

There have in fact been a few signs of this: since the debate, for example, Mr. Obama has seen a decline in the polls in high-population (but noncompetitive) states like California, Massachusetts and Illinois. Those polls are one reason that the forecast model does have the gap between the Electoral College and the popular vote expanding. But we could really use more polls from high-population blue states, like California and New York, and high-population red states, like Texas and Georgia.

By the way, it shouldn’t be thought of as “good news” for Mr. Obama when he gets a poll that shows a decline in his standing in California or New York. What happens when a poll like that comes in is that the forecast model lowers its estimate of Mr. Obama’s national popular vote, while his Electoral College standing will be unchanged.

Such a poll, therefore, will increase the gap the forecast model perceives between the Electoral College and
the popular vote. But the gap widens because Mr. Obama’s popular vote projection declines, not because his electoral vote probability improves.