If President Obama wins re-election on Tuesday, the historical memory of the race might turn on the role played by Hurricane Sandy.

Already, some analysts are describing the storm as an “October surprise” that allowed Mr. Obama to regain his footing after stumbling badly in the first presidential debate and struggling to get back on course. Some Republicans seem prepared to blame a potential defeat for Mitt Romney on the storm, and the embrace of Mr. Obama by New Jersey Gov. Chris Christie and other public officials.

The theory has some appeal. The last three days of polling have brought what is almost certainly Mr. Obama’s strongest run of polling since the first presidential debate in Denver. Mr. Obama led in the vast majority of battleground-state polls over the weekend. And increasingly, it is hard to find leads for Mr. Romney in national surveys — although several of them show a tie. 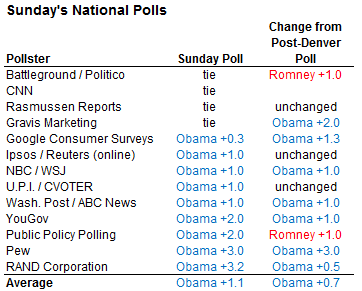 When the hurricane made landfall in New Jersey on Oct. 29, Mr. Obama’s chances of winning re-election were 73 percent in the FiveThirtyEight forecast. Since then, his chances have risen to 86 percent, close to his highs on the year.

But, while the storm and the response to it may account for some of Mr. Obama’s gains, it assuredly does not reflect the whole of the story.

Mr. Obama had already been rebounding in the polls, slowly but steadily, from his lows in early October — in contrast to a common narrative in the news media that contended, without much evidence, that Mr. Romney still had the momentum in the race.

Moreover, there are any number of alternatives to explain Mr. Obama’s gains before and after the storm hit.

Each of these hypotheses could merit its own article. But the point is that the causes for Mr. Obama’s gain in the polls are overdetermined, meaning that there are lot of variables that might have contributed to the one result.

If I had told you in January that Mr. Obama’s approval rating would have risen close to 50 percent by November, and that the unemployment rate would have dropped below 8 percent, you likely would have inferred that Mr. Obama was a favorite for re-election, with or without a hurricane and what was judged to be a strong response to it.

This is not to dismiss the effects of the hurricane entirely. But the fact that Mr. Obama’s rebound in the polls has been slow and steady, rather than sudden, would lend weight to some of these other ideas, even if they make for less dramatic narratives.

Although the outcome of the election is not yet known, we are at the point where the polling averages in each state are pretty much locked in — and it is mostly a question of whether the actual results will approximate them, in which case Mr. Obama should claim enough electoral votes between Ohio and other states to win another term. 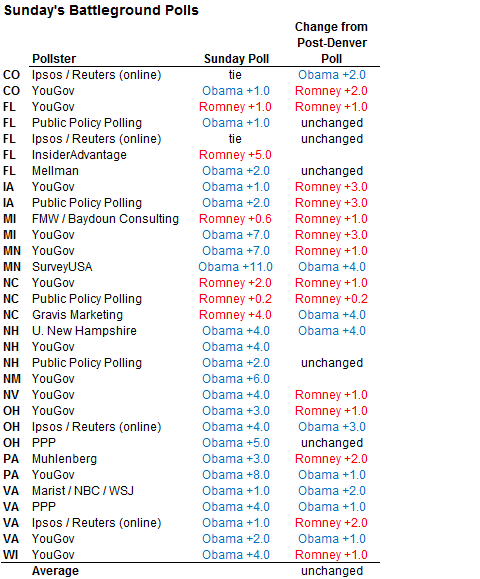 Given the extremely large volume of polling data that has been published in the closing days of the campaign, you should mostly be looking for cases in which there are trends apparent across several different surveys of the same state.

For example, Mr. Obama led in four separate polls of Virginia on Sunday, three of which represented improvement from the prior polls issued by the same polling firms. Virginia has moved out of the tossup category into a state that leans toward Mr. Obama; he has between a 70 and a 75 percent chance of winning it, according to the forecast model.

That represents a problem for Mr. Romney because Virginia’s 13 electoral votes could potentially substitute for Ohio’s 18 under many electoral configurations. If Mr. Obama were to win Virginia along with Wisconsin, Nevada and either Iowa or New Hampshire, he would have enough electoral votes even if he lost Ohio.

Mr. Obama’s polls in Iowa were not as strong on Sunday as they had been earlier in the week. Increasingly, it looks as though Mr. Obama’s first line of defense consists of Ohio, Wisconsin and Nevada specifically, which would usually allow him to win the Electoral College on their own.

Mr. Obama’s standing in Ohio seems to have drifted upward to a lead of about three points from two, reducing the risk of a polling error there.

North Carolina, where Mr. Romney led surveys on Sunday, does not appear as though it will play a central role in the electoral math.

What about that poll in Michigan, which had Mr. Romney leading by about a point?

The problem is that the polling firm, Foster McCollum White Baydoun, has had extremely Republican-leaning results (it found Mr. Romney 15 points ahead in Florida earlier this year) and shows a close race pretty much every time it polls Michigan. Other recent polls of the state do not show the same result, and the campaigns
are not treating Michigan seriously as a battleground state based on their pattern of advertising expenditures and other resources.

Pennsylvania has more merit as a last-ditch tactical play for Mr. Romney — but it is another case where the characterization of the race as having tightened relies in part on a selective reading of the evidence. Between Saturday and Sunday, five polls of Pennsylvania had Mr. Obama an average of four points ahead there, and they did not show much of a trend, with Mr. Obama having led by the same amount on average in the previous editions of the same surveys.

A version of this article appears in print on 11/06/2012, on page A12 of the NewYork edition with the headline: Factoring Hurricane Sandy Into the Election Equation.