If you are following some of the same people that I do on Twitter, you may have noticed some pushback about our contention that Barack Obama is a favorite (and certainly not a lock) to be re-elected. I haven’t come across too many analyses suggesting that Mitt Romney is the favorite. (There are exceptions.) But there are plenty of people who say that the race is a “tossup.”

What I find confounding about this is that the argument we’re making is exceedingly simple. Here it is:

Obama’s ahead in Ohio.

Mr. Obama is leading in the polls of Ohio and other states that would suffice for him to win 270 electoral votes, and by a margin that has historically translated into victory a fairly high percentage of the time.

The argument that Mr. Obama isn’t the favorite is the one that requires more finesse. If you take the polls at face value, then the popular vote might be a tossup, but the Electoral College favors Mr. Obama.

So you have to make some case for why the polls shouldn’t be taken at face value.

Some argue that the polls are systematically biased against Republicans. This might qualify as a simple argument had it been true on a consistent basis historically, but it hasn’t been: instead, there have been some years when the polls overestimated how well the Democrat would do, and about as many where the same was true for the Republican. I’m sympathetic to the notion that the polls could be biased, statistically speaking, meaning that they will all miss in the same direction. The FiveThirtyEight forecast explicitly accounts for the possibility that the polls are biased toward Mr. Obama — but it also accounts for the chance that the polls could be systematically biased against him.

Others argue that undecided voters tend to break against the incumbent, in this case Mr. Obama. But this has also not really been true in recent elections. In some states, also, Mr. Obama is at 50 percent of the vote in the polling average, or close to it, meaning that he wouldn’t need very many undecided voters to win.

A third argument is that Mr. Romney has the momentum in the polls: whether or not he would win an election today, the argument goes, he is on a favorable trajectory that will allow him to win on Tuesday.

This may be the worst of the arguments, in my view. It is contradicted by the evidence, simply put.

In the table below, I’ve listed the polling averages in the most competitive states, and in the national polls, across several different periods.

First are all polls from June 1, the approximate start of the general-election campaign, until the start of the party conventions.

Next are the polls between the conventions and the first debate in Denver in early October.

Finally are the polls since that first debate in Denver. It’s been roughly 30 days since then. If Mr. Romney has the momentum in the polls, then this should imply that his polls are continuing to get better: that they were a little better this week than last week, and a bit better last week than the week before. So these polls are further broken down into three different periods of about 10 days each, based on when the poll was conducted.

What type of polling average is this, by the way? About the simplest possible one: I’ve just averaged together all the polls of likely voters in the FiveThirtyEight database, applying no other weighting or “secret sauce.” 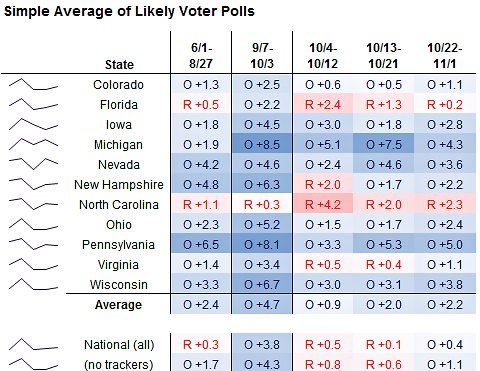 If you evaluate the polls in this way, there is not much evidence of “momentum” toward Mr. Romney. Instead, the case that the polls have moved slightly toward Mr. Obama is stronger.

In 9 of the 11 battleground states, Mr. Obama’s polls have been better over the past 10 days than they were immediately after the Denver debate. The same is true for the national polls, whether or not tracking polls (which otherwise dominate the average) are included.

Mr. Obama’s polls are worse than they were in the period in between the conventions and the debates. But they’re better than they were immediately after Denver; he’s gained back one percentage point, or perhaps a point-and-a-half, of what he lost.

What about the national polls? Aren’t those still worse for Mr. Obama than they were before the conventions?

Actually, that isn’t so clear. The one “trick” I’ve played is to look only at polls of likely voters. Mr. Obama’s national polls looked superficially better before the conventions because many of them were polls of registered voters instead, which do tend to show more favorable results for Democrats. (You’re welcome to say that polls of registered voters have a Democratic bias.) We alerted you in August to the prospect that there was a “gap” between the state polls and the national polls, which was concealed by the fact that many of the national polls at that time were reporting registered-voter results, while most of the state polls were using likely voter numbers all along. However, our method adjusted for the tendency of registered-voter polls to be biased toward Democrats by shifting them in Mr. Romney’s direction. Some of what is perceived as “momentum” toward Mr. Romney is in fact a fairly predictable consequence of the national polls having flipped over to applying likely voter screens at various points between August and October.

But now we’re getting into all these complications! All these details!

I am aware — and you should be too — of the possibility that adding complexity to a model can make it worse. The technical term for this is “overfitting”: that by adding different layers to a model, you may make it too rigid, molding it such that it perfec
tly “predicts” the past, but is incompetent at forecasting the future. I think there is a place for complexity — the universe is a complicated thing — but it needs to be applied with the knowledge that our ability to understand it is constrained by our human shortcomings.

This critique fails, however, since the simplest analysis of the polls would argue that Mr. Obama is winning. He’s been ahead in the vast majority of polls in Iowa, Michigan, Minnesota, New Mexico, Nevada, Ohio, Pennsylvania and Wisconsin, and all the other states where the Democrat normally wins. These states add up to more than 270 electoral votes. It isn’t complicated. To argue that Mr. Romney is ahead, or that the election is a “tossup,” requires that you disbelieve the polls, or that you engage in some complicated interpretation of them. The FiveThirtyEight model represents a complicated analysis of the polls, but simplicity is on its side, in this case.

The polls published on Thursday ought not to have done much to change your view of the race. The national polls showed little overall trend toward either Mr. Obama or Mr. Romney, but they also had Mr. Obama just slightly ahead, on average, in contrast to what we were seeing immediately after Denver. 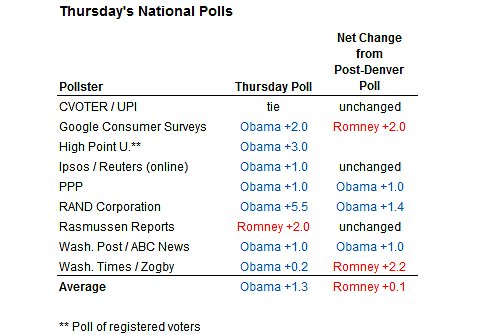 The battleground state polls on Thursday were something of a mixed lot, in terms of results and quality. The most attractive number for Mr. Romney is the poll of Ohio by Wenzel Strategies, which had him three points ahead there. However, the polls from this particular firm have been four or five points Republican-leaning relative to the consensus, which the FiveThirtyEight model adjusts for. 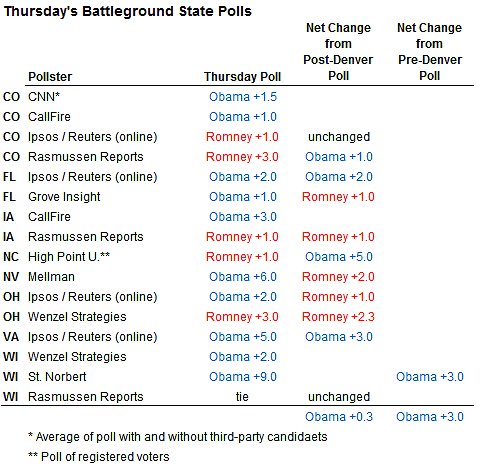 Or just keep it simple and average the polls together, warts and all. You will find that Mr. Obama is the Electoral College favorite.

A version of this article appears in print on 11/03/2012, on page A13 of the NewYork edition with the headline: Simple Case For Saying That Obama Is Favored.