For the New England Patriots, Year 1 A.B. — After Brady — starts in a little over a week, with Cam Newton under center against the Miami Dolphins at Gillette Stadium. The shadow of Tom Brady’s long and storied Patriots career will hang over the team for the foreseeable future, even as No. 12 has moved on to a new home in Tampa, but it is also very much in the rearview mirror. Now coach Bill Belichick and the Pats must steer into a new era for a franchise that won six Super Bowls and 17 AFC East titles with Brady leading the way.

The FiveThirtyEight NFL prediction model, which launches in earnest next week, doesn’t think the post-Brady Patriots will tumble to the bottom of the league quite yet. We still give them a 3 percent chance of winning the Super Bowl and rank them as the NFL’s eighth-best team on paper with a healthy Newton. Yet we also think the AFC East — which New England has won 11 times in a row — is very much up for grabs. Although our model lists the Patriots as division favorites, with a 38 percent probability of winning, that’s barely ahead of the Buffalo Bills (who check in at 34 percent). The perilous state of New England’s division streak is just one of the many storylines that should make this the weirdest — and most fascinating — Patriots season we’ve witnessed in a long time.

The most obvious source of oddity will simply be the sight of someone other than Brady playing quarterback. Not only was he a fixture at the position for nearly two decades, but he also ensured that the Pats would have a great passing performance for almost all of those seasons. After predecessor Drew Bledsoe’s Elo QB rating — our statistical method of ranking quarterbacks — beat the NFL average for starters just once over his eight years as New England’s primary QB, Brady would finish above average (often well above it) in 16 consecutive seasons1 from 2002 through 2018: 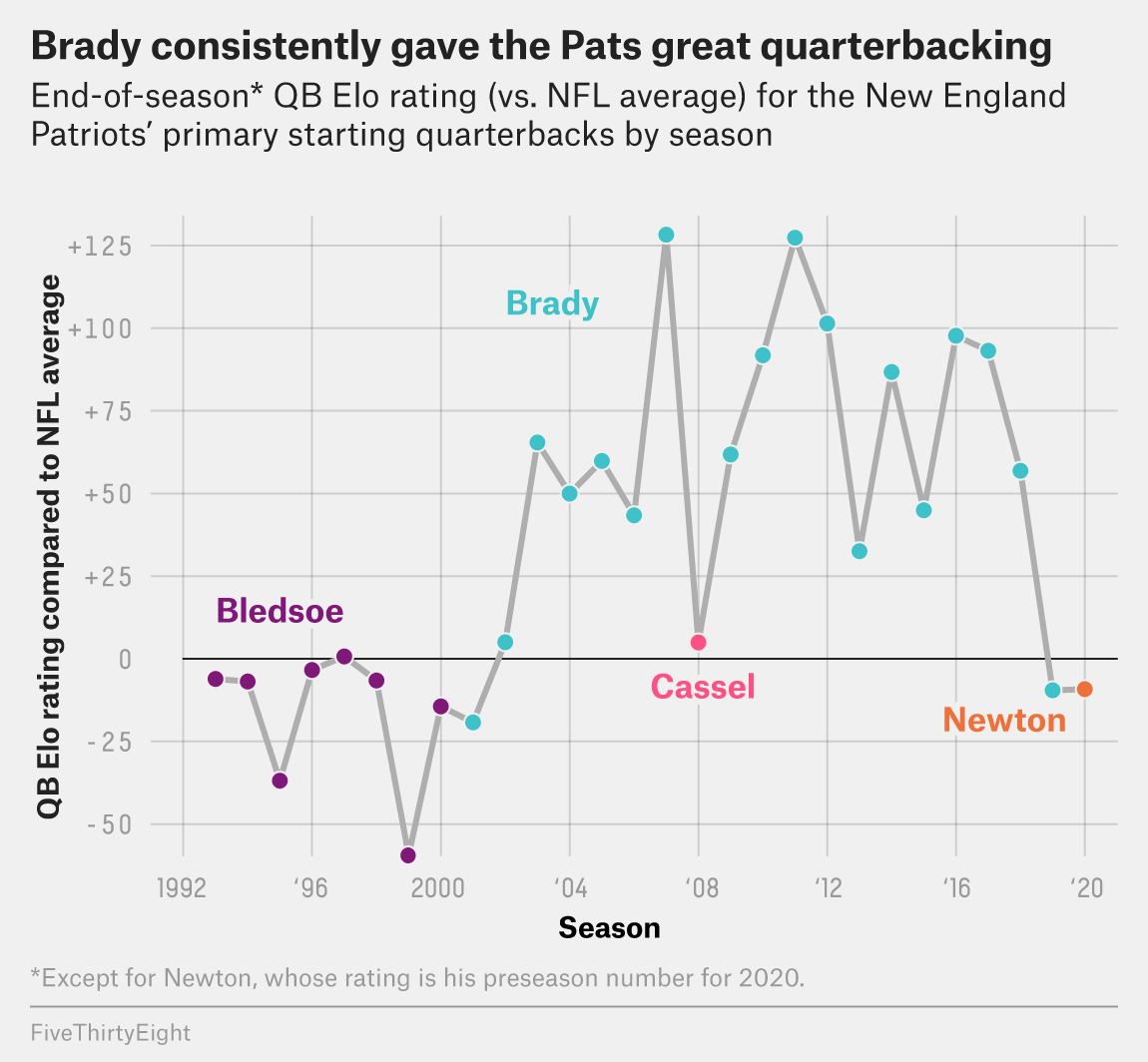 Because of this, the Patriots have been the NFL’s most successful passing team of the 21st century, whether ranked by traditional measures such as passer rating or by more advanced metrics like ESPN’s Total Quarterback Rating. And in a league where passing has taken on ever-increasing significance, it makes sense that this would translate to so much success in New England over that span. Now the Pats will turn to Newton as a replacement — but can he replace Brady’s production?

If we’re talking about the 2019 version of Brady, then it’s very possible. Remember, Brady’s streak of above-average seasons ended after 2018; he was actually a slightly below-average starter by Elo last year, after a stretch of eight subpar performances in his final 10 starts as a Patriot (including an abysmal loss against Tennessee in the playoffs). With that in mind, Newton’s numbers from 2018 and 20192 (a 90.5 passer rating and a 47.8 QBR) are very comparable to Brady’s full-season stats from last year (an 86.4 passer rating and a 52.8 QBR), and his QB Elo heading into 2020 is almost exactly the same as Brady’s.3 Newton will also likely bring a wider range of play-calling options to the Pats’ offense than it has enjoyed in years, with his ability to run and a strong track record of success on zone-read plays.

Of course, that just means the Patriots might get a level of performance at QB in 2020 that’s similar to what they got in 2019. But the 2020 Pats may need more than that to keep playing to Belichick’s demanding standards. The 2019 version was hardly an offensive powerhouse: According to ESPN’s Stats & Information Group, New England averaged only 1.7 expected points added (EPA) per game on offense, which ranked just 17th in the NFL. This was in large part because the passing attack ranked 18th — easily its worst EPA ranking since 2006, when ESPN’s data set begins.

Tom Terrific? Hardly. (To be fair, Brady’s receiving corps was badly depleted for most of 2019, which had a measurable effect on his stats. But the end result was still a mediocre passing offense at best.)

Instead, the key to the Patriots’ 12-4 season was actually the league’s top defense by EPA, spearheaded by the game’s most fearsome bulwark against the pass. New England easily led the NFL in interception rate and ranked sixth in sack rate. Two of the Pats’ three Pro Bowlers were defenders — cornerback Stephon Gilmore and linebacker Dont’a Hightower.4 But the defense also saw numerous departures over the offseason, including not just transactional losses Kyle Van Noy, Jamie Collins, Danny Shelton and Duron Harmon, but also Hightower and Patrick Chung, both of whom opted out of the 2020 season over COVID-19 concerns.

(New England’s growing list of opt-outs actually prompted some around the league to speculate that it was all part of a Belichickian conspiracy, perhaps to land a top pick in next year’s draft — though it’s hard to imagine Belichick tanking any season, even in a pandemic.)

Using Pro-Football-Reference.com’s Approximate Value (AV), that group of lost defenders added up to 66 points of value last season, or nearly half of the team’s total from its defensive starters. Since 1960, only one team — the 2001-02 Baltimore Ravens — lost more starting defensive AV over a single offseason than the 2019-20 Patriots stand to:

Even without the heavy losses, we would have expected New England’s defense to regress to the mean in 2020. As FiveThirtyEight’s Josh Hermsmeyer has detailed, NFL defenses are much less consistent both within and across seasons than their counterparts on offense, which has led many a defensive powerhouse to wonder where the magic went the following year. The Patriots’ talent exodus only makes a repeat performance less likely.

The Patriots’ only hope for bucking that trend might lie in the fact that they seem to always excel at three very important, yet often unpredictable, categories: turnover differential, yards per point differential and starting field position differential. There’s a lot that goes into each, and Brady’s penchant for avoiding interceptions certainly has played a role in New England’s turnover numbers over the years. But Belichick’s coaching no doubt also has contributed year after year. Plus he has some new faces to work with, after devoting 63 percent of his draft capital this spring to defensive players, the eighth-most of any team.

Another source of hope in Foxborough? Newton’s ceiling. Now healthy at long last, Newton is not too far removed from being the QB who won MVP honors — and produced one of the 25 or so best seasons by a signal-caller since 1960 — in 2015. If he rediscovers any version of that form, it would help the Patriots offense strike fear into opposing defenses again … and help make up for whatever deterioration is in store on defense. At the very least, Newton is a better bet to exceed Brady’s 2019 performance than either Jarrett Stidham (an untested former fourth-round pick) or Brian Hoyer (mostly a career backup) would have been.

Still, our projections see New England as only a little better than a .500 team now, calling for it to finish 9-7 — barely ahead of the Bills and New York Jets within the division. After literal decades of looking up at Brady and the Patriots, their fellow AFC East teams can sense that a new era may be at hand. To keep the old one going, Newton will have to jump-start a mediocre offense, and Belichick will have to ride out an unprecedented wave of defensive defections. Let the intrigue begin.