Sunday night was surprisingly eventful for the New England Patriots. Within a span of less than 20 minutes, it was reported that the NFL had docked the Patriots a 2021 third-round draft pick and fined it $1.1 million for illegally videotaping the Bengals sideline and — seemingly out of the blue — that New England had signed free-agent quarterback Cam Newton to a one-year deal.

The loss of a third-round pick in next year’s draft could end up proving costly for New England. After all, the presumed starting quarterback prior to Sunday’s signing of Newton was Jarrett Stidham, a fourth-round pick out of Auburn. Less than a week ago, one league insider was speculating that Stidham would start all 16 games for the Patriots in 2020. But Newton — another Auburn QB and former NFL MVP — has upended that assumption. In the near term, Newton’s addition could improve the Patriots Super Bowl chances: At least one sports book moved the Patriots from a 3.9 percent shot to hoist the Lombardi trophy to 5.3 percent after the signing was reported.

[Related: The NFL Is Drafting Quarterbacks All Wrong]

Still, signing Cam isn’t without risk. Newton presumably comes with a high chance of future injury, making the prospect of future production uncertain. He’s had a series of surgeries over the past few years, the most recent of which was an operation on his foot in December for a Lisfranc injury. The injury uncertainty, coupled with reports that teams were unable to work him out because of COVID-19, may explain why New England was able to sign him to a league minimum contract. But putting injury risk aside, if we assume Cam is healthy enough to start, there is decent evidence that he can be a productive passer for the Patriots.

Based on work by Eric Eager and George Chahrouri of Pro Football Focus, we know that a quarterback’s passing performance from a clean pocket is one of the best predictors of his future production, and Newton has been very consistent on those throws throughout his career. 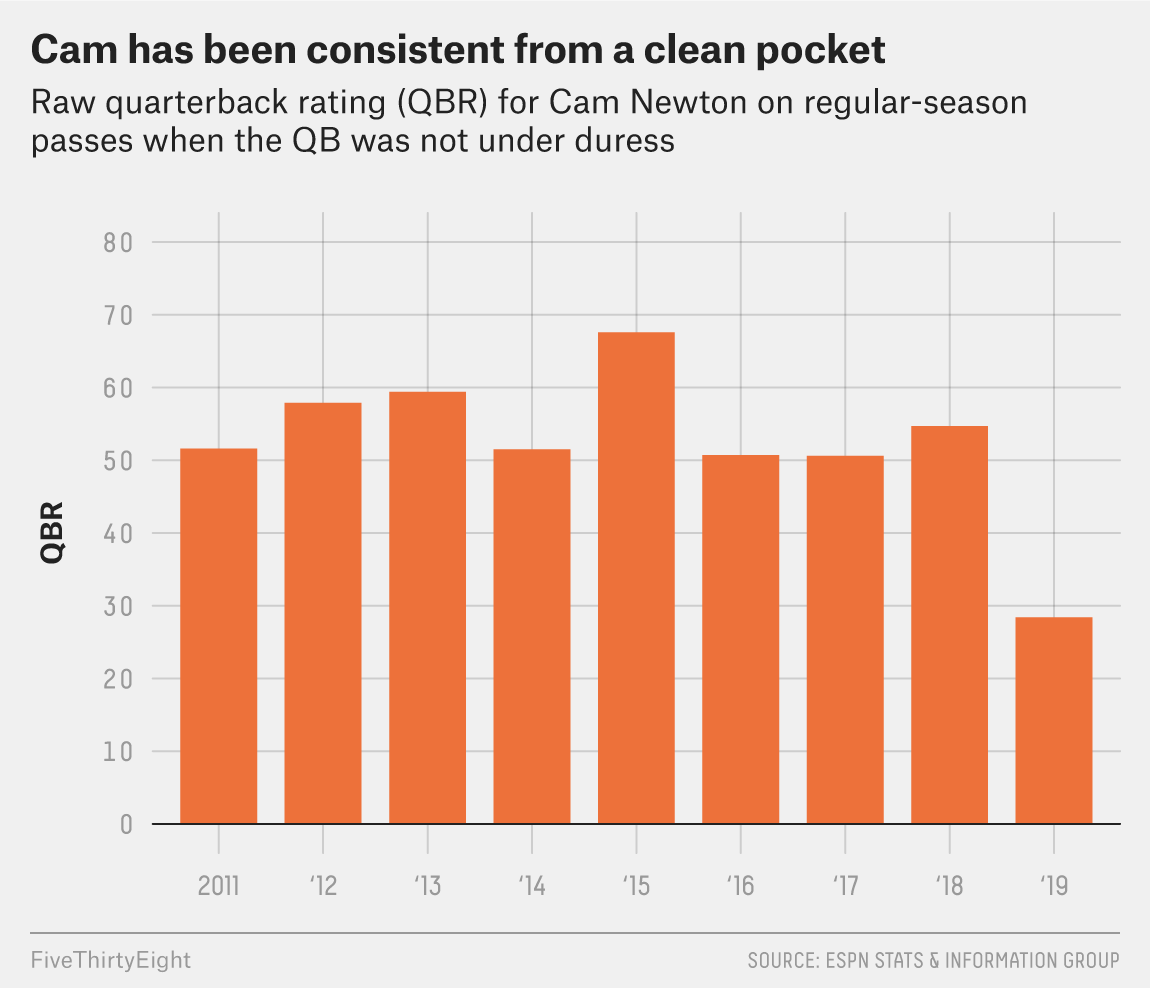 With the exception of 2019, when he started just two games, Cam has not had a QBR below 50 on clean pocket throws since entering the league.1 Completion percentage over expected, or CPOE, can also help us forecast future performance, and in 2018 Newton completed passes 4.2 percentage points over what we would expect from a league-average QB, according to NFL Next Gen Stats. As Newton enters his age-31 season, there’s no reason to believe he won’t return to his previous form if his health cooperates.

But Cam’s passing might just be secondary to the value he brings to New England as a runner. Mobile quarterbacks make defenses account for an extra player, negating the numbers advantage in the running game defenses usually enjoy versus pocket passers, who they can often safely ignore. And Cam’s size brings an extra dimension of difficulty to the problem of defending the run because he’s so hard to bring down. Since 2011, Newton leads NFL quarterbacks with 110 missed tackles forced, according to Pro Football Focus. But these runs aren’t just broken plays and scrambles: Newton is a smart, instinctual player who a team can trust with option plays like zone read. Since 2011, Newton leads the NFL with 13 touchdowns on 242 zone-read rush attempts, the highest number of attempts among quarterbacks in that span.

Smart football analysts believe that the Patriots will adapt their offense to maximize Newton’s strengths. Offensive coordinator Josh McDaniels likely has run concepts from his time in Denver with Tim Tebow that he can dust off and tailor to Cam’s specific strengths, and the Patriots defense is widely regarded as good enough to keep games close, despite the unpredictability of defensive performance from year to year. There’s a lot that will need to break right for the Patriots to make a deep playoff run in 2020. But even if all Newton’s signing did was to divert attention away from yet another round of league sanctions for questionable competitive behavior, it may have already been worth it.