Fast food workers in New York City might be about to get a big raise. The even bigger news: Workers in Buffalo might, too.

A New York state commission voted Wednesday to recommend the state raise the minimum wage for fast food workers to $15 an hour in New York City by 2018 and in the rest of the state by 2021. If Acting Labor Commissioner Mario Musolino signs off on the recommendation, the new policy will take effect without requiring approval from the state legislature.

Right now, New York’s roughly 180,000 fast food workers are covered by the statewide minimum wage of $8.75 an hour, which will rise to $9 at the end of the year. Most of them don’t make much more than that: According to the state Department of Labor, the median hourly wage for the fast food industry in New York is just $9.03. (In May, Gov. Andrew Cuomo convened a Wage Board empowered by state law to consider raising the minimum for the fast food industry.)

In recent months, Los Angeles, San Francisco, Seattle and other jurisdictions have adopted $15 an hour minimum wages, generally phased in over several years. Those wage hikes, unlike New York’s, apply to all industries, not just fast food. But in one important way, New York’s proposal is more radical: It applies to the whole state, not just New York City.

That distinction is critical because, as I wrote earlier this year, it doesn’t make sense to talk about the minimum wage without factoring in the local cost of living. Most of the places enacting big wage increases recently have been coastal cities where living costs — and especially rents — are high. New York City fits that pattern: Adjusting for cost of living, the state’s $8.75 minimum wage is worth less than $7 an hour in the New York City metro area. (The city itself is even more expensive. Using a somewhat different methodology, I estimated that New York City’s minimum wage would be worth less than $5 an hour in the average U.S. city. See the note on methodology below for more details.)

But the story is very different in other parts of the state. Living costs in the Albany region, for example, are almost exactly the same as the U.S. average. And further upstate, costs are below the national average. In the Utica area, the state’s $8.75 minimum wage is worth the equivalent of $9.60 an hour. 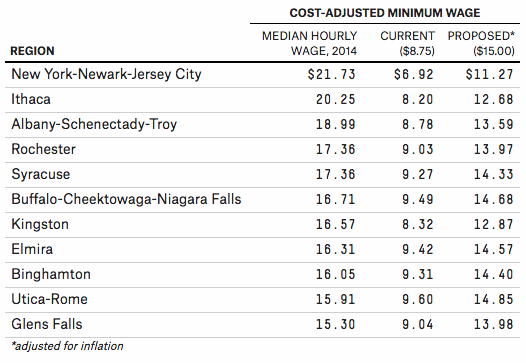 The wage board’s decision acknowledges the regional differences by phasing in the wage hike more gradually outside of New York City. Assuming a 1.7 percent annual rate of inflation — the average over the past three years — $15 an hour in 2018 is the equivalent of $14.25 today (adjusting only for inflation, not the cost of living). $15 an hour in 2021, when the hike would take effect outside of the city, is the equivalent of about $13.50 in today’s dollars.

But for the businesses that must pay the higher wage, the phased approach doesn’t fully offset the fact that the cost of living is so much lower upstate. Adjusting for both inflation and living costs, the new wage floor in the New York area is the equivalent of about $11.27 in today’s dollars, versus more than $14 in some upstate areas.

Another way to look at this is to focus on what workers earn now: Near New York City, the median worker (in all industries) earns nearly $22 an hour, compared to under $16 in the Utica area. That means upstate employers would be hit much harder by any wage hike, because far more of their workers would be owed raises.

Supporters of the wage board’s recommendation say the statewide approach is justified because even in lower-cost areas upstate, $15 an hour is barely enough to support a family.

“There are obviously cost-of-living differences between different areas of the state, but what is clear is that $15 is fairly low in terms of what these workers actually need in order to not be on public assistance,” said Irene Tung, a senior policy researcher with the National Employment Law Project.

The fast food industry, however, counters that its members — especially those upstate — can’t afford such a big pay raise and will end up cutting jobs.

“These fast food franchisees are small business owners, many of them minorities and women struggling to survive on low margins and unable to absorb a 66 percent state-imposed increase on the wages for their entry level workers,” said Randy Mastro, an attorney representing a coalition of fast food franchisees.

Methodology note: The wage calculation for New York City proper is based on a cost-of-living index from the Council for Community and Economic Research, which I’ve re-weighted based on the CPI-W, the Bureau of Labor Statistics’ measure of prices for urban wage workers. For more on that calculation, see my story from May.

The CCER calculates its index for cities; for statewide policy, it makes more sense to look at metro areas instead. For metro-area adjustments, I used the Bureau of Economic Analysis’s index of regional price parities. In order to more accurately capture the way workers spend their cash wages, I recalculated the BEA’s index using weights from the Consumer Price Index. (The main effect of the adjustment is to give more emphasis to rent.)