The Los Angeles City Council on Tuesday voted to raise the city’s minimum wage to nearly $10 an hour.

Oh, sure, the headlines in Wednesday’s papers all said the council raised the wage floor to $15 an hour. That’s what the actual ordinance says, too. But $10 is a more accurate reflection of what low-wage Angelenos will actually experience.

There are two reasons for this. The first is inflation: Los Angeles’s minimum wage won’t go up to $15 tomorrow. Instead, the hike will be phased in over the next five years. Assuming inflation holds more or less steady, $15 an hour in 2020 will be worth the equivalent of about $13.75 today.

But the bigger issue is that $15 doesn’t go as far in Los Angeles as it does in most of the rest of the country. Not even close. According to data from the Council for Community and Economic Research, it costs workers about 40 percent more to live in Los Angeles than in the average American community. That means that $15 in LA is the equivalent of less than $11 in the U.S. overall.

Put the two together and LA’s new minimum wage of $15 in 2020 is worth about $9.75 to the typical American worker today. (This is a fairly rough estimate. See methodology note below for more details.)

Still, $9.75 an hour would represent a big raise for hundreds of thousands of Angelenos. The city’s current minimum wage is $9 an hour, which is the equivalent of less than $6.50 after adjusting for LA’s high cost of living. That gives Los Angeles one of the lowest cost-adjusted minimum wages in the country. A University of California, Berkeley, study last year estimated that an earlier version of the wage-hike proposal would give raises to 567,000 workers, most of them minorities. (A report commissioned by the Los Angeles Chamber of Commerce countered that the proposal could cost the city thousands of jobs.)

LA is hardly alone. High living costs mean that the minimum wage doesn’t go very far in many other big coastal cities, even those that set the wage floor well above the federal level of $7.25 an hour. New York’s $8.75 minimum wage, for example, buys the equivalent of just $4 worth of goods in Manhattan (and $5 in Brooklyn — we don’t have data for New York’s other boroughs). Even San Francisco’s highest-in-the-nation $12.25 minimum wage is worth only about $7. (That figure will rise to about $8.20 when the city’s $15 minimum wage takes effect in 2018.)

Meanwhile, southern and Midwestern cities are comparatively affordable despite having lower nominal minimum wages. Tennessee has no state minimum wage, meaning most employees are covered by the federal minimum wage. But in Memphis, a low cost of living means $7.25 is worth about $8.50. And in Columbus, Ohio, the $8.10 state minimum is worth close to $9.

To see how other big cities compare, see the table below. 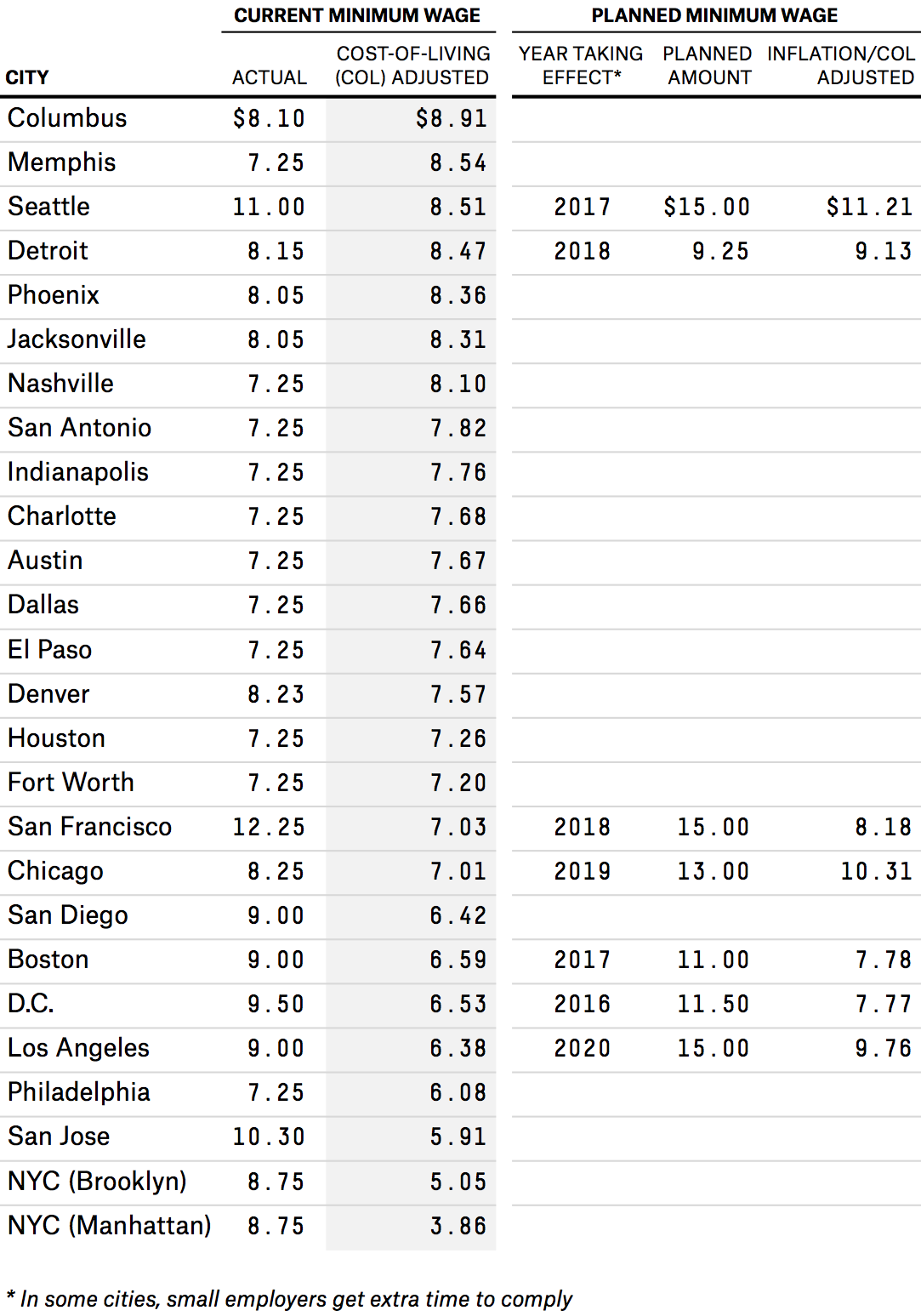 Methodology note: The Council for Community and Economic Research calculates a cost-of-living index for more than 300 U.S. cities. The index is based on local prices for a representative “basket of goods,” weighted according to the government’s Consumer Expenditure Survey. The CCER’s index, however, attempts to estimate costs for “professional and executive households,” whose spending patterns differ from those of minimum-wage workers.

In order to account for this, I re-weighted the CCER’s index based on the CPI-W, the Bureau of Labor Statistics’ measure of prices for urban wage workers. (This is slightly different from the better-known CPI-U, which measures prices for all urban consumers, regardless of whether they work.) This process isn’t perfect; I could only re-weight the prices the CCER collected, not change the items themselves, and the categories in the CCER’s data didn’t perfectly match those in the CPI-W. My analysis also doesn’t account for the ways in which low-wage workers might differ from typical earners. Still, the major differences should be reliable: Wage earners spend more of their income on housing, gas and medical care than the wealthier people in the CCER’s index, and less on pretty much everything else.

My inflation adjustments assume that prices rise 1.7 percent per year, which has been the average annual change in the Consumer Price Index over the past three years. If inflation is higher, as the Federal Reserve expects, then the present value of future minimum-wage increases will be lower. At a 2 percent inflation rate, for example, LA’s 2020 minimum wage would be worth only about $13.55 instead of $13.75 (before adjusting for living costs). All my calculations are based on full years, so a 2020 wage hike is assumed to take effect exactly five years from today.

CORRECTION (May, 21, 7:52 a.m.): The San Diego City Council passed a minimum-wage increase last year, but subsequently agreed to delay the increase pending a public referendum. An earlier version of the table in this story indicated the increase had taken effect.