With only eight days remaining in the 2014-15 regular season, it’s time to check in on FiveThirtyEight’s NBA Power Ratings. If you’re wondering how these numbers work, the short version is that all 30 NBA teams are ranked according to a projection of their true talent over the upcoming week — and the upcoming week only — using Real Plus-Minus (RPM) player ratings provided by Jeremias Engelmann and Steve Ilardi. For more details on the methodology,1 see our introductory rankings post. 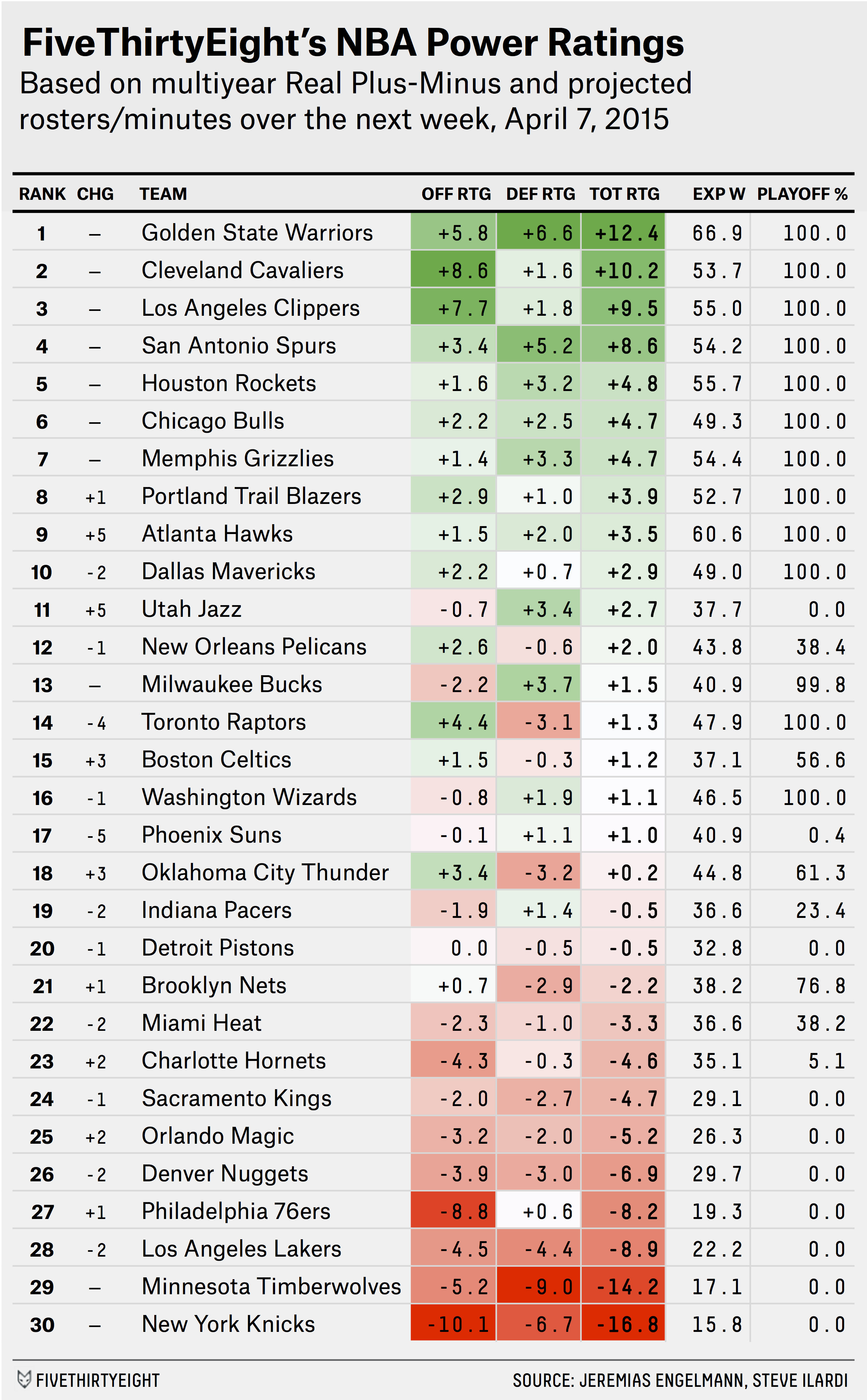 The Eastern Conference playoff plot continues to thicken. Last Monday in this space, our model listed the Miami Heat and Indiana Pacers with playoff probabilities of 76 percent and 50 percent, respectively, with the Brooklyn Nets (38 percent) and Boston Celtics (25 percent) likely to be on the outside looking in.

Now, the tables have turned.

The Celtics, aided by a 3-1 record over the past week (and an improved power rating), now sport a 57 percent playoff probability and more expected end-of-season wins than either Miami or Indiana. Likewise, the Nets leapfrogged the Pacers and Heat by an even greater margin after going 4-1 over the past week-plus. Brooklyn’s chances of making the playoffs are now nearly 77 percent, a radical departure from its 17 percent postseason probability of two weeks prior.

And if Brooklyn and Boston are now in the driver’s seats for the final pair of Eastern Conference playoff berths, that means the Heat and Pacers are currently both underdogs to make the postseason. Miami has lost four straight games, and its power rating is down because several of its good RPM players (such as Luol Deng, Hassan Whiteside and Chris Andersen) are listed as day-to-day with injuries. And for its part, Indiana went 2-2 on the week-plus, but even at .500, the Pacers lost ground to the surging Celtics and Nets.

The Heat have things a bit better than the Pacers. They face an easier remaining schedule, and the league’s tie-breakers favor them in the event of a tie with Boston and/or Brooklyn, which accounts for Miami’s superior playoff odds despite a projected win tally identical to that of Indiana. But for each team, it’s a big reversal from where they stood just a week ago.

So while there’s little time left in the schedule, the Eastern Conference playoff picture is no clearer than it’s been the past few weeks — the front-runners to get in are just different.