It’s easy to look around right now and conclude that popular public opinion has turned against scientists. Twitter hashtags have urged the president to fire Anthony Fauci. A widely shared video claimed government scientists planned the novel coronavirus pandemic. Politicians have waded in as well: “Frustration … stems from this idea that you people don’t know what’s best for you, and we’re just going to bring in these Harvard-educated Ivy League public health experts, and they’re going to know better than you and better than your family,” said Michigan state Rep. Beau LaFave while explaining the anti-lockdown protests in his state.

But survey data suggests public trust in scientists is not actually eroding. In fact, it’s gone up during the pandemic. And while that may be surprising to people watching with concern as anti-vaccine extremists join forces with people who don’t want to wear facemasks, the dichotomy between a perceived anti-science zeitgeist and what people actually tell pollsters is nothing new. The scientific and medical communities remain among the most trusted institutions in America — even among people who might seem ideologically primed to reject them. “I do think there’s maybe a lack of trust about the science of trust in science, though,” said David Lazer, a professor of political science at Northeastern University.

It’s true that Americans have become much less trusting, especially in the federal government, over the last five decades. But the scientific and medical communities have come away far less bruised by that beatdown than other public institutions. In the General Social Survey, conducted by the research organization NORC at the University of Chicago, you can see a signal that trust in the scientific community has pretty much held steady since the 1970s, making it the second-most trusted institution in the country of the 13 institutions rated by the GSS over that time period, after the military.

And that is holding true in the time of coronavirus, according to separate surveys by Lazer’s COVID-19 Consortium for Understanding the Public’s Policy Preferences Across States and by the Pew Research Center. 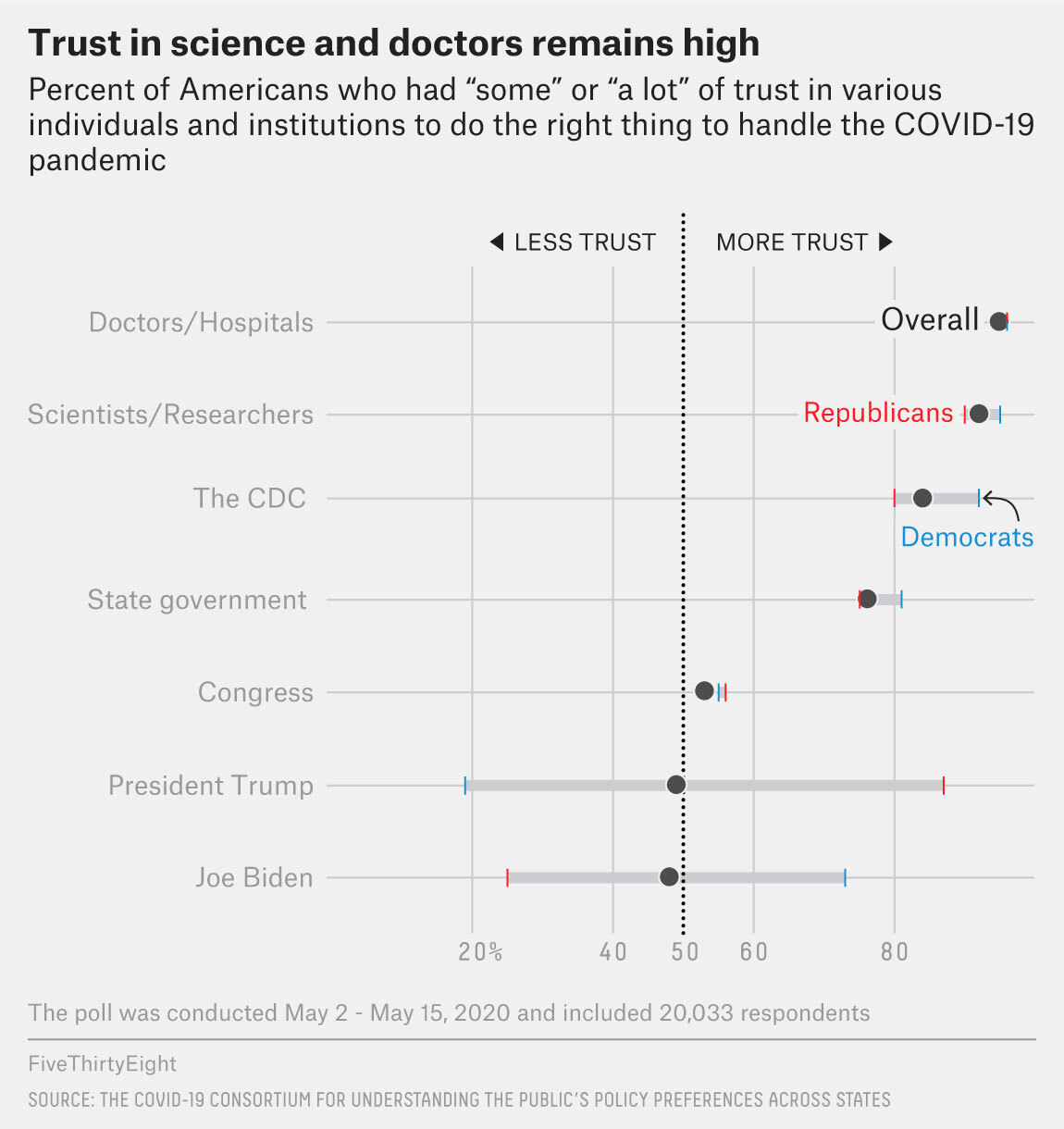 In a May survey of more than 20,000 Americans, Lazer’s team found that both Democrats and Republicans trust scientists and doctors to handle the COVID-19 pandemic more than any other individual or institution, including Congress, President Trump, state government and even the Centers for Disease Control and Prevention. Between surveys conducted in April and May, trust in scientists/researchers and in doctors/hospitals each fell by only 1 percent. Trust in the CDC dropped 3 points, from 87 percent to 84 percent during that same time period.

There are partisan differences at play in this data, said Cary Funk, director of science and society research at Pew. Democrats, for example, have shown trust in scientists during the current pandemic, while Republicans’ trust has remained about the same. Funk said she hasn’t really seen partisan differences in approval of medical scientists like this before. But even with that, the context is important. The divide may be growing, but it’s not because Republicans are losing trust, it’s because their trust in scientists and medicine has stayed at the same old high rates.

“The war on science is really overblown,” said Erik Nisbet, a professor of communication at Ohio State University. That’s not to say, however, that scientists aren’t getting attacked. But Nisbet and other researchers say the divide between what we see in the news and what we see in the polls lies in conflating political rhetoric with public opinion. Just because political leaders demonize scientists (or demonize the other party for demonizing scientists) doesn’t mean most Americans are personally engaged in that fight.

Much of the idea of a war on science is informed by the rhetorical back-and-forth between political elites around the issue of climate change, Lazer said. And contention around that particular issue has been partly caused by a deliberate strategy from corporate groups that stand to lose out if serious climate legislation were to pass.

Specific scientific issues can become political footballs, Funk said. But the fact that a few have — particularly those related to environmental legislation — doesn’t mean the public, at large, mistrusts scientists. The flip side of that is also true, said Dominique Brossard, a professor of life sciences communication at the University of Wisconsin. Trusting scientists to have your best interest in mind isn’t the same thing as always being willing to follow scientific advice, even when it conflicts with your other values or priorities.

But the war on science does matter, even if it isn’t — broadly speaking — real. The novel coronavirus pandemic provides some good examples of why that’s true, Lazer said. We are, after all, talking about a situation that depends on people following largely voluntary safety guidelines in order to prevent the spread of the virus. Those guidelines, like wearing a mask or staying 6 feet away from other people, depend on social norms. If one group’s trusted leaders are disparaging safety guidelines, it probably undermines those segments of the population agreeing to go along with the scientific advice. Even if they still trust scientists about the same as they ever did, people could come away feeling like it’s not normal, expected or even reasonable to wear a mask. And in a pandemic where one person can spread a virus to hundreds, that means everyone becomes less safe.

The rhetoric surrounding scientists also matters because of how scientists themselves respond to it, Nisbet said. If scientists believe the public really distrusts them, then they are going to communicate information to that public in a different way. They’re going to make different statements to the press, and they could end up creating a problem where one didn’t previously exist. “Demonizing the other isn’t a communications strategy,” Nisbet said. “By assuming polarization or overestimating it, you can make it more of a self-fulfilling prophecy.”