Everybody is cynical and few people are changing their minds. That’s the takeaway from the House’s impeachment hearings. (Well, that and Steve Castor’s unconventional taste in briefcases.) It’s the sort of national attitude that you might suspect would inspire political apathy. If you think all politicians are crooked do-nothings, you might care less what they do.

But a half century of research — and an even longer slide into pessimism among the American electorate — suggests that any cynicism following the impeachment hearing isn’t likely to make voters stay home in 2020. That was the old theory, born in the post-Watergate days when trust in politics was as low and heavy as a funk bass line, said Jack Citrin, professor of political science at the University of California, Berkeley. But it never bore out. Instead, Citrin and other experts say cynicism actually seems to be a political motivator, increasing both activism and voter turnout. But while we often broadly think of those as Good Things for Democracy, they don’t necessarily portend a shiny, hopeful political future.

Americans are definitely cynical about politics. The American National Election Studies survey, which has tracked American opinion since 1948, includes a trust index that combines the results of four questions about voters’ perceptions of government and politicians into a single score.1

The average trust score in 2016 was 17, the lowest ever recorded. Although these questions are about trust, they serve as a proxy for understanding cynicism because political scientists think of those two things as opposites. Cynicism goes up as trust goes down, or vice versa.

Now, we weren’t always this dark. Scrub away the black eyeliner and you’ll find a country that once got an average score of 61, back in 1966. Same survey. Same questions. And you see the same trend in other measures of trust, such as data collected by the Pew Research Center that tracks the percentage of Americans who agree that the federal government will generally do what is right. Half a century ago, 77 percent of us had high hopes for our elected officials. Since then, things have been on a downward slide, with two clear exceptions. 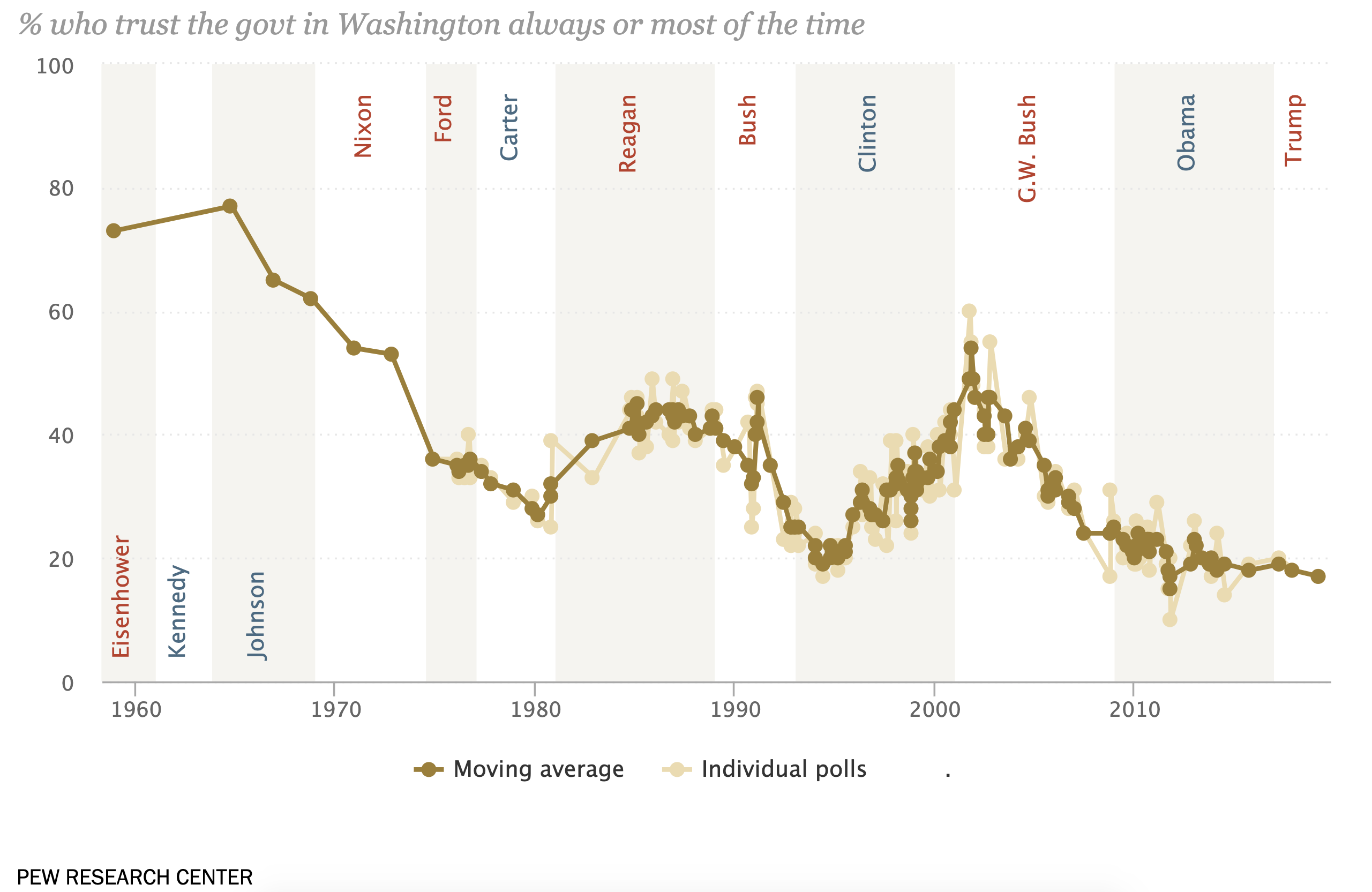 One was a rise in public trust during the early Reagan years, which returned to a downslope about the time the Iran-Contra Affair became public. The other rise came in the latter Clinton years, peaking after 9/11, then rapidly falling again. Today, trust in the government is so low that one expert I spoke to — a Berkeley political scientist named Laura Stoker — said she had a hard time imagining how it could fall further. “We’re pretty much at the floor,” she said. “It’s pretty darn low.”

And yet, voter participation has not followed a similar trend. “I’d say cynics generally aren’t apathetic,” said Sanne Rijkhoff, a professor of political science at Texas A&M, Corpus Cristi. “If you really don’t like something, that implies a certain level of passion about it.” Despite our historically low levels of political trust, Americans join in political movements and activism at staggeringly high rates. Back in 2008, Pew found that 63 percent of Americans had joined in some kind of political or civic activism. A similar survey by the same organization in 2012 found that 72 percent of us were out there, doing something to shape a political system we mostly hate. And Logan Dancey, a professor of government at Wesleyan University, even found evidence that the more cynical people are, the more likely they are to take a political scandal seriously, see wrongdoing, and want politicians to be held accountable.

Errrr, not exactly, Citrin said. Some cynicism is good, he said. Think of it as skepticism, in that case. You probably don’t want a public that is happy to just smile and approve of everything its elected representatives do.

But, he told me, there is a point where the downsides of cynicism swamp the benefits. And we probably hit that point back in the days of bell bottoms and bad mustaches. Growth in cynicism is associated with increased support for outsider and extremist candidates willing to break political taboos. It’s associated with decreased support for incumbents. It’s associated with growing distrust between politicians themselves, which makes them less likely to work together to solve problems. Voters may get more active as they get cynical, but their politicians become less active, which just contributes to a cycle that drives even more cynicism, Stoker said.

Unsurprisingly, cynicism is also associated with decreased support for large-scale government programs, such as health care reform, public education or climate change adaptation. That’s not a good sign for any Democrats trying to use 2020 to usher in a new New Deal.

In fact, cynicism is a highly partisan thing in and of itself. The American public may be able to join hands and sing together in the spirit of disillusionment and doubt, but that doesn’t mean we’re united by it. If you break people down by their party affiliation, you see an increase in trust when their party of choice is in power, a decrease when that party loses power, and vice versa. “That lessened trust among those who don’t hold power, that’s fueling the aggregate decline [in trust],” Stoker told me.

It’s no coincidence that the lowest levels of trust come from independents — who never get to enjoy being the party in power. Stoker thinks the growth in independent-identified voters is one of the trends fueling the growth of cynicism.

What’s more, the political scientists I spoke with have no idea how you fix this. The initial plummet in trust looks like an Olympic ski jump preceding Watergate that heads far down the mountain after. Early on, experts thought it would rebound once the government was able to demonstrate it could “do the right thing” — essentially show it could be trusted after all. “But what do you mean by doing the right thing?” Rijkhoff said. The interactions between growing partisan rancor and the effects of cynicism itself have combined to make reversing extreme cynicism damn near impossible.

On the plus side, though, maybe that means the recent impeachment hearings won’t make things any worse. “Watergate was a shock to the nation,” Stoker said. “But I don’t think this will have any consequences on trust in government whatsoever.”

CORRECTION (May 22, 2020, noon): A previous version of this story contained several errors. The name of the organization that provided data for the first chart is American National Election Studies, not the American National Elections Studies Survey or the American National Election Survey. The ANES has existed since 1948, not 1958 as originally stated. Data that tracks the percentage of Americans who agree that the federal government will generally do what is right was collected by the Pew Research Center from polls conducted by multiple organizations, including Pew, not tracked entirely by Pew as the original text suggested. The first chart used incorrect trust index numbers for 2006 and 2008; it has been replaced with a corrected chart. The second chart incorrectly said that the share of Americans who trust the government included people who said it would do the right thing “some of the time”; that should have read “most of the time.” In addition, the second chart averaged Pew’s rolling averages in a way that attributed some polls to the wrong years. The second chart has been replaced with a trend line chart created by Pew.