For years now, economics reporters have been writing about the “slow but steady” recovery in the job market. Every piece of good news was tempered with a note of caution: Job growth was positive but frustratingly slow; unemployment was falling but remained too high; employers were hiring but creating too few “good jobs.”

It may be time to retire those clichés.

Friday’s monthly jobs report from the Bureau of Labor Statistics was positive, full stop. Employers added 214,000 jobs in October, and they added 31,000 more jobs in August and September than initially believed. Job growth has now topped 200,000 for nine straight months for the first time since the Clinton administration. Meanwhile, the unemployment rate fell to 5.8 percent, the labor force grew and pretty much every major sector showed significant job growth.

Given all that, it might seem surprising that Americans are still so dour about the economy. As I noted after Tuesday’s election, 7 in 10 Americans said in exit polls that the economy is in bad shape, and only 28 percent said their financial situation had improved in the past two years. Dissatisfaction with the state of the economy was widely cited as a principal reason for Republicans’ big gains.

There’s one number in Friday’s jobs report that might help explain that frustration: The average worker earned $24.57 an hour in October, up 2 percent from a year earlier. Even as hiring has picked up and unemployment has fallen, wages growth has remained decidedly anemic. 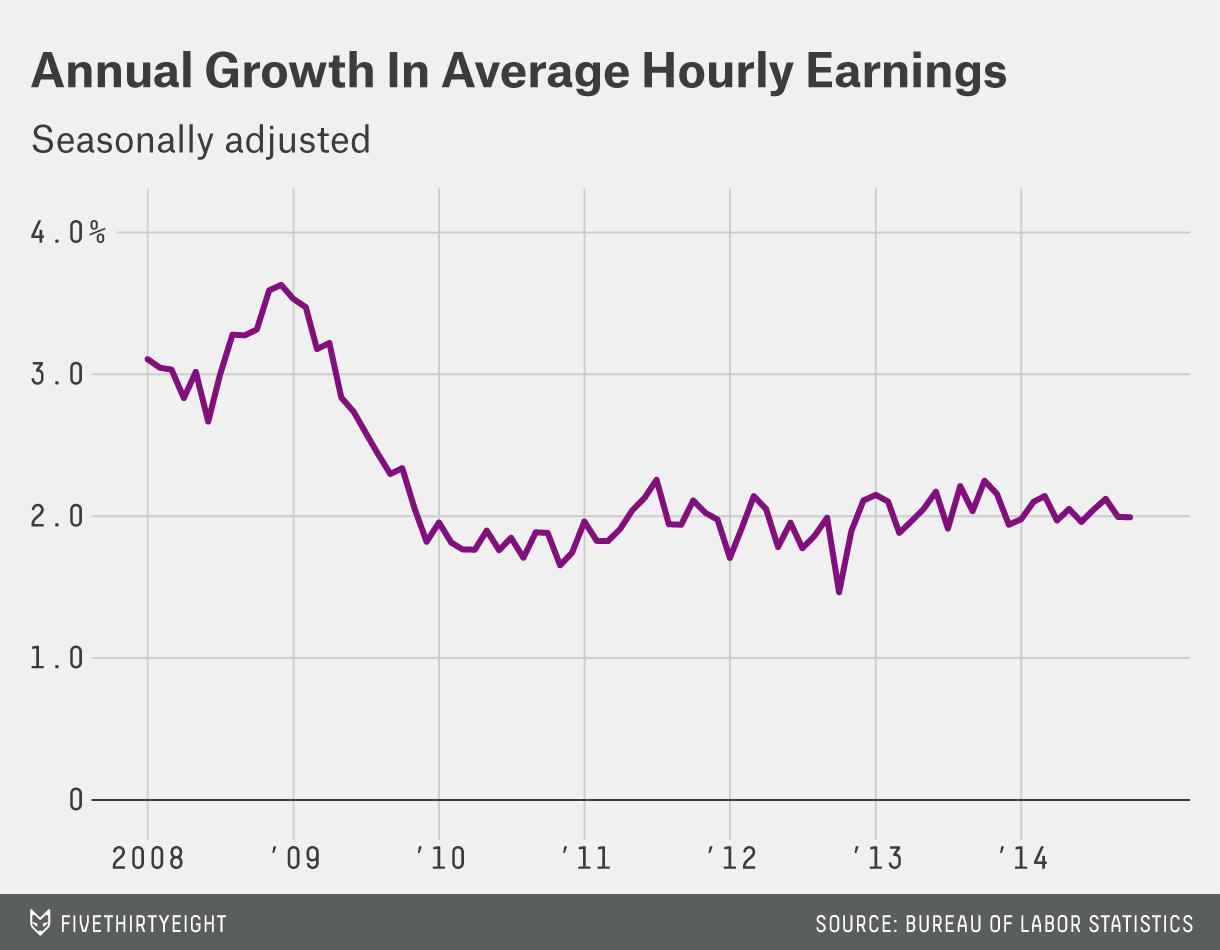 From an economics perspective, modest wage growth isn’t an entirely bad thing. It suggests that employers aren’t struggling to find workers to fill the available jobs, which means employment growth can continue without the economy overheating. For policymakers at the Federal Reserve, it means they can keep trying to boost the economy with low interest rates without worrying too much about inflation.

But for workers, the earnings figures mean that they aren’t seeing the economic recovery reflected in their paychecks. Until that changes, they’re unlikely to take much comfort in jobs-day headlines, no matter how positive.

Here are some other observations from today’s report:

A strengthening trend: The headline figure — 214,000 new jobs — was solid but actually a slight disappointment relative to economists’ expectations. But it’s never a good idea to pay too much attention to the one-month changes, no matter how good or bad. It’s better to focus on the trend, which has been showing improvement. Employers have added 2.6 million jobs over the past year. Moreover, the hiring has been widely distributed: Manufacturers, retailers, hospitals and professional offices all added jobs. Even the government, which cut jobs for much of the recovery, is adding workers again, albeit slowly. 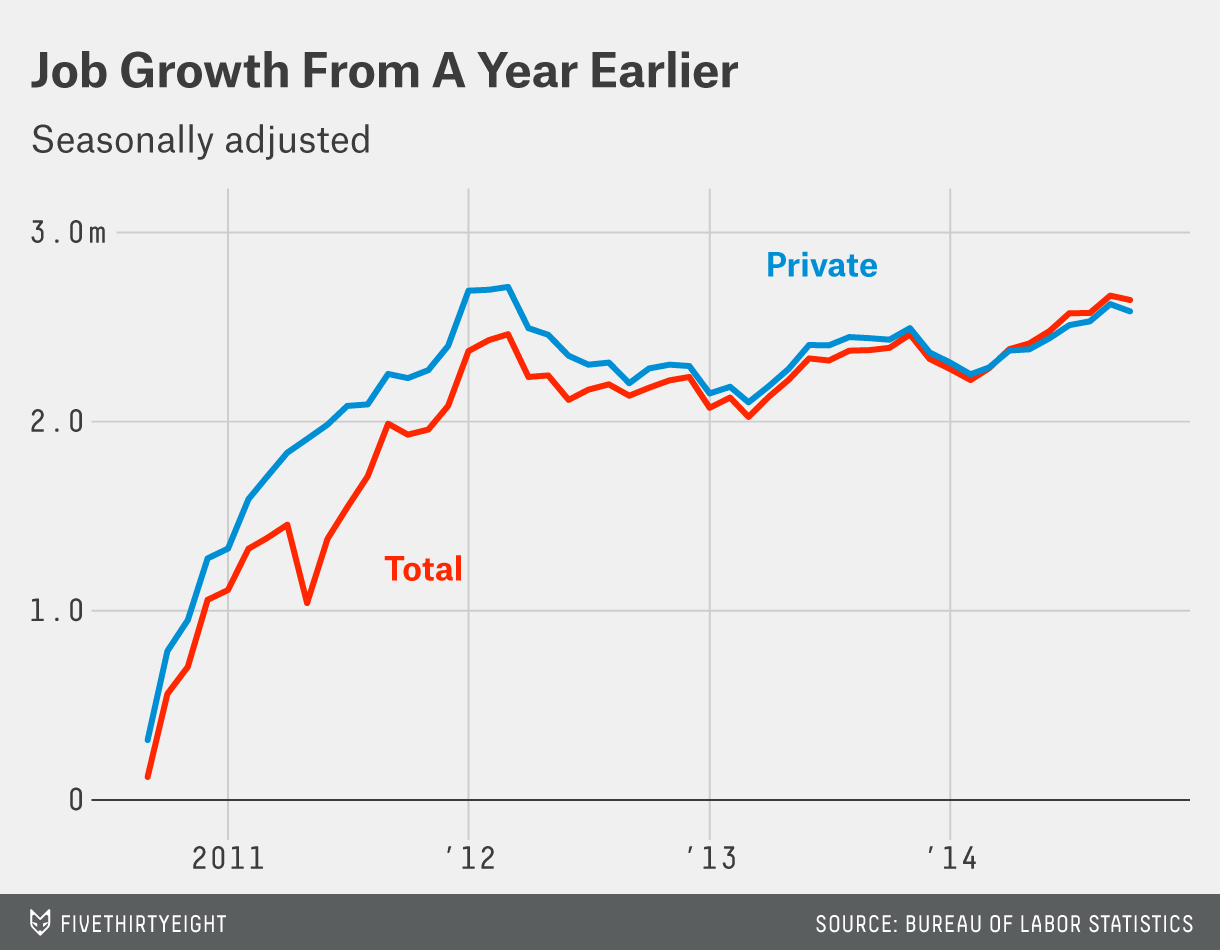 A huge household survey: The payroll figures were good, but the really big news in Friday’s report came from the so-called household survey, which counts workers rather than jobs. (One worker could have multiple jobs.) It showed a huge 683,000-person gain in the number of employed Americans, and a big 267,000-person drop in the number of people who are unemployed. Importantly, 62,000 people rejoined the labor force to look for work — a sign of confidence in the job market. Nearly 77 percent of so-called prime-age workers (those between ages 25 and 54) are working — the highest share of the recovery — though that’s still well below the prerecession rate. 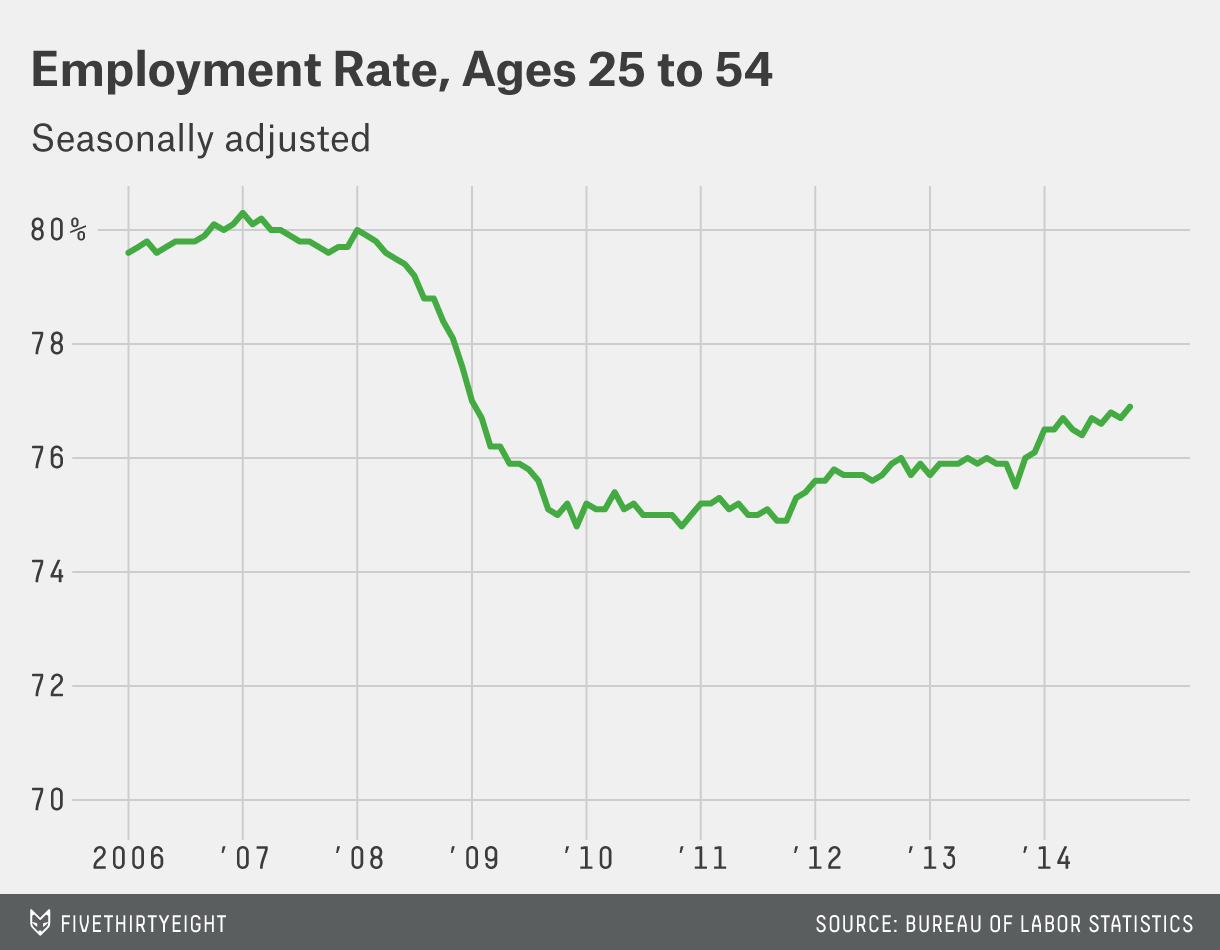 Good news for the unemployed: About 24 percent of unemployed workers found jobs in October, the highest rate of the recovery. That’s more than the 23 percent of unemployed workers who quit looking for job, and it’s only the third time in the recovery that more job seekers have found work than given up. The number of long-term unemployed — those out of work more than six months — continued to fall, down 28 percent over the past year. And fewer workers report being “discouraged,” meaning they want to work but don’t think any jobs are available. 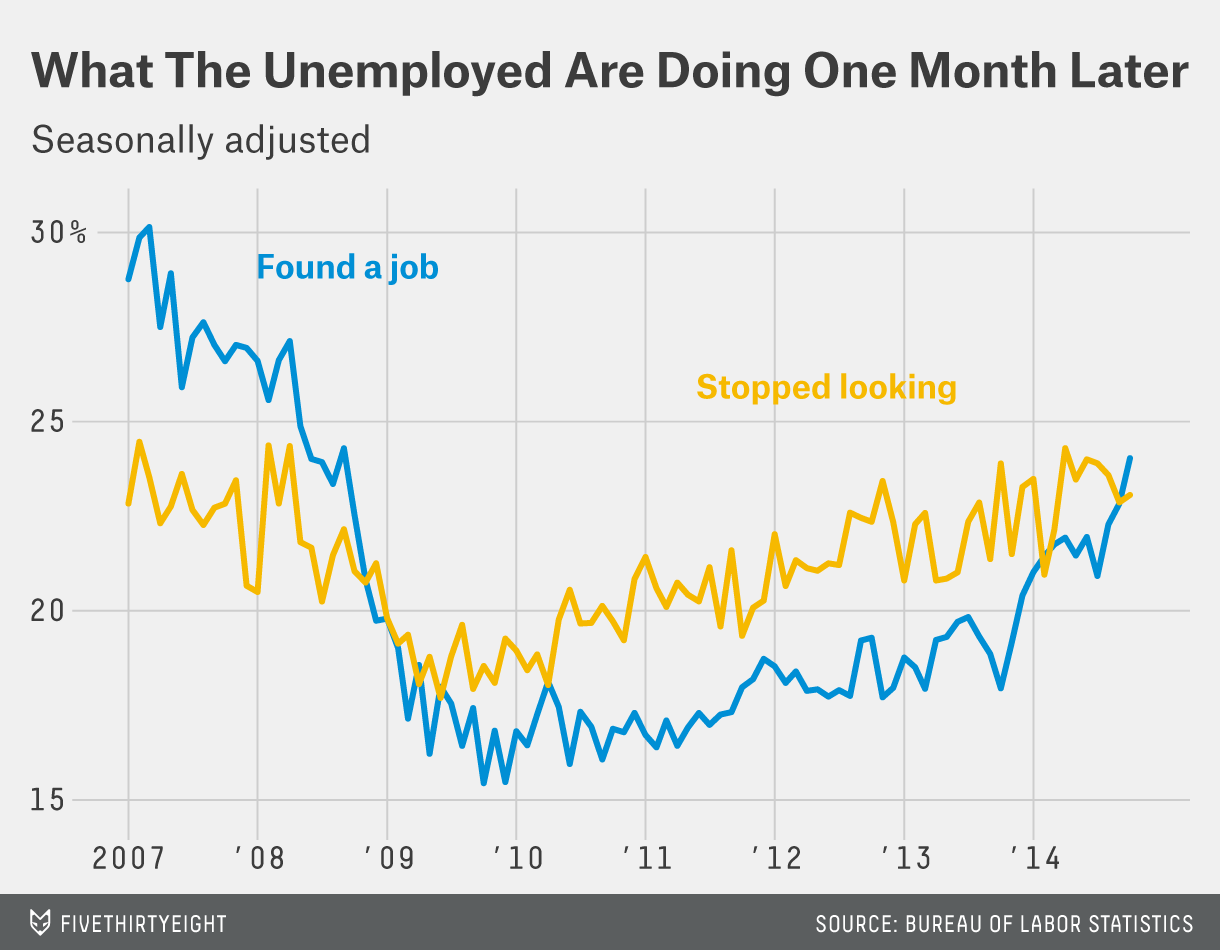 More time on the clock: The average worker clocked 34.6 hours per week in October, a slight increase from September; non-managers showed a similar gain in hours worked. Neither gain was big, but it could be a sign that employers are seeing more demand for their goods. (On the other hand, factory overtime fell slightly.) More hours means more pay for workers at a time when hourly wages aren’t rising much. Meanwhile, employers continue to add mostly full-time jobs – full-time employment is nearly back to its prerecession level, while part-time employment has been mostly flat. And fewer people are working part-time because they can’t find full-time jobs. 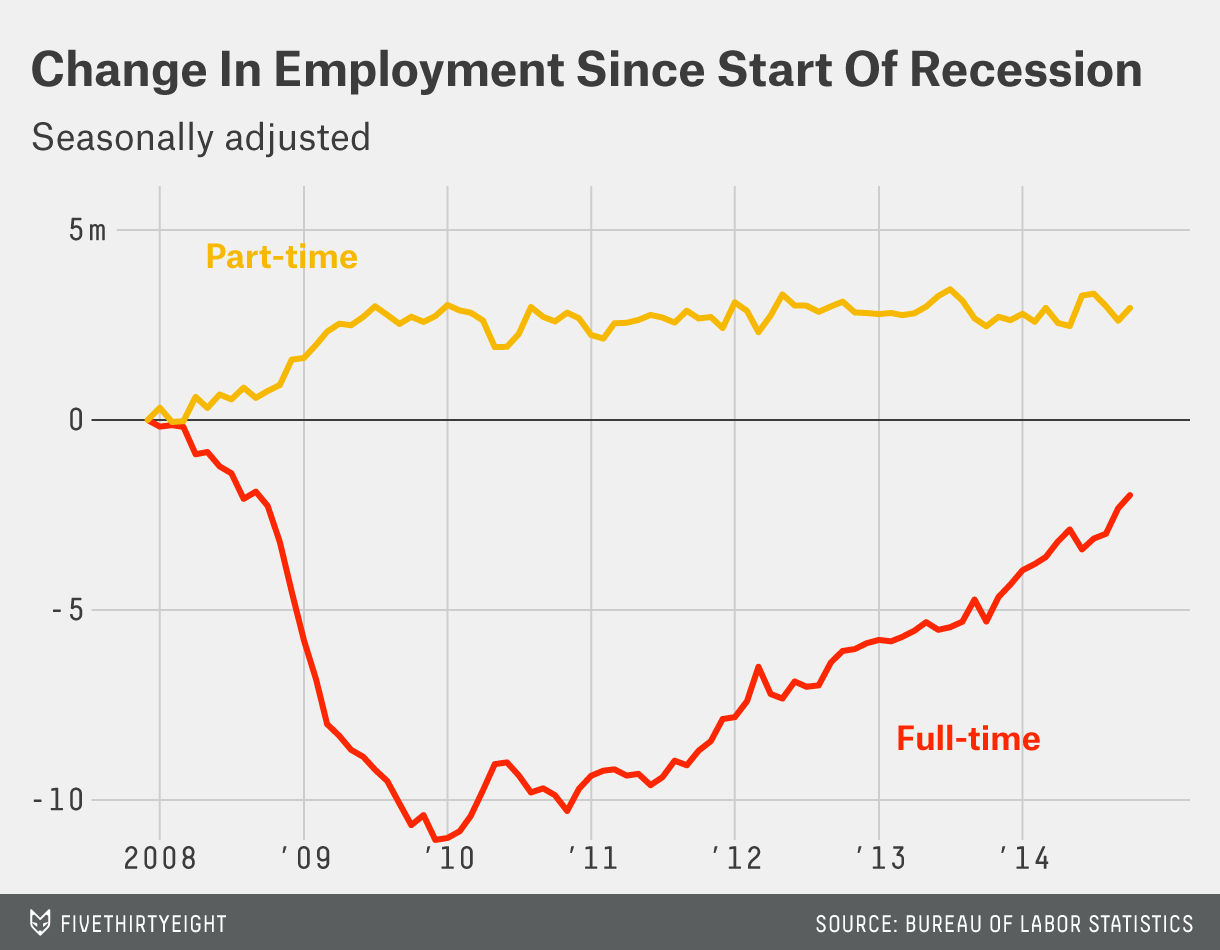