Spend enough time around pundits and you’ll hear somebody say, “It’s all about turnout.” Who shows up to vote, and those voters’ demographics, is the great mystery of any election. The conventional wisdom is that the demographics of the voting pool are friendlier to Democrats in presidential years than they are in midterm years, and that it’s the other way around for Republicans. Sasha Issenberg had a recent piece in The New Republic arguing that the Democrats may be doomed in this year’s midterm elections because they can’t find a way to bring midterm turnout closer to what it is in presidential years. Peter Wehner, meanwhile, wrote in Commentary in February that Republicans are doomed in presidential years because of the change in the electorate’s racial demographics.

But turnout isn’t nearly as important as D.C. wags make it out to be. The demographics of who voted in 2012 vs. 2010 were different,1 but that difference didn’t make much of a difference. The reason Republicans won more votes in 2010 — and likely will in 2014 — is that voters wanted Republicans in office, not that minorities and young people didn’t turn out to vote.

First, let’s sort out the differences between people who voted in 2010 and 2012, according to the government’s Current Population Survey.

Note how all minority groups but “others” made up a larger share of voters in 2012 than in 2010. Notice, too, how young voters decreased as a percentage of all voters, regardless of race. The share of voters who were whites over the age of 30, the most Republican group, was 6 points higher in 2010 than in 2012.

But if the two voting pools somehow magically switched places, 2012’s demographics wouldn’t have swung control of the House in the 2010 election. I transposed the 2012 demographics onto the 2010 vote tallies2 and Republicans still won the national vote by about 3.3 percentage points in the midterms. 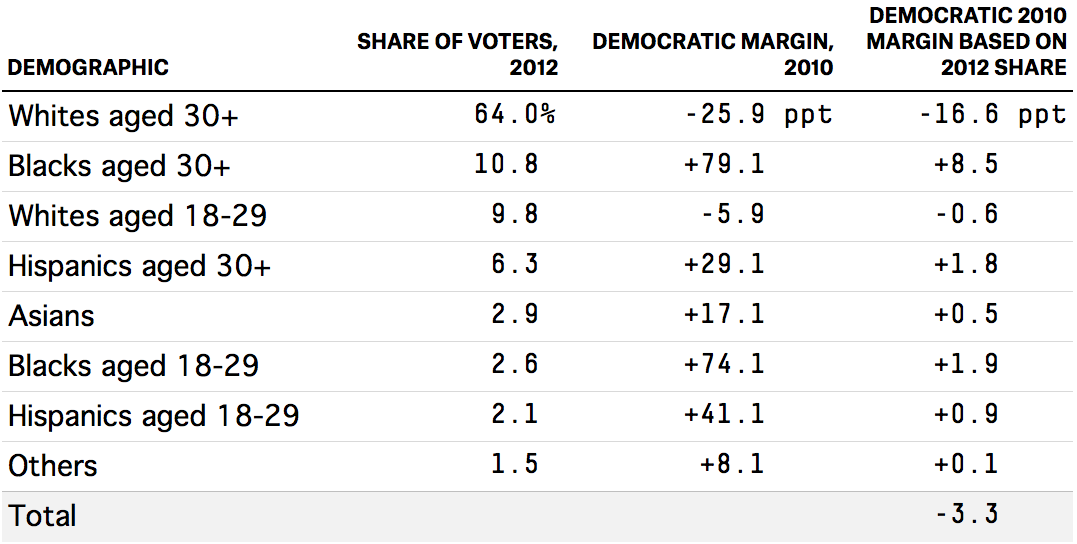 In 2010, Republicans actually won the national vote by 6.7 points — a safer margin. According to a 2010 seat curve3 put together by FiveThirtyEight editor-in-chief Nate Silver, each point in the national House vote was worth about four seats. In our counterfactual demographic swap, Republicans would have earned 3.4 fewer points and won 14 fewer seats, for a total of 228 seats.

But it’s not as simple as that. Even this model overstates the difference between midterm and presidential years. To assume that the electorate would have looked the same in 2010 as it did in 2012 is, among other things, to assume that the country was as white in 2012 as it was in 2010. That, of course, isn’t true. The electorate gains more minorities every year, while the number of white voters is growing at a significantly smaller rate.

To standardize for changes in population, I applied each demographic’s 2012 turnout rate among voting-age citizens to its population size in 2010,4 which remade the 2010 voters to look like this:

Once all that’s done, the gaps between midterm turnout and presidential year turnout are even smaller. In this hypothetical 2010, Republicans would have won the national House vote by 4.1 points and taken somewhere in the neighborhood of 232 seats, good enough for a 53-seat gain. The more robust the math, the more solid the GOP’s lead.

The same thing works in reverse, when we take 2010’s turnout rates and apply them to 2012. With just midterm voters casting a ballot, President Obama would have won the national vote in 2012 by 1.2 points. That’s 2.7 points less than his actual margin in 2012, but it’s more than enough to have carried the election.5

It’s not that the demographic splits of voter turnout don’t matter. They worked in Republicans’ favor in 2010 and in Democrats’ favor in 2012; demographics just weren’t the reason either party won.6

What really mattered was that voters changed their minds about which party they wanted to vote for. Look at the voting patterns of each group. Republican congressional candidates won white voters who were at least 30 years old by 25.9 points in 2010, but Mitt Romney won them by only 20.2 points in the presidential race in 2012. Obama’s margin among black voters 30 and older was 89.4 points in 2012, while House Democrats’ margin for this group was 79.1 points in 2010.

These aren’t turnout figures — they’re voting figures. The percentage of voters who were black, white or Latino didn’t matter. Votes were what counted.

Some of this is attributable to the “midterm penalty,” the historical trend showing voters tend to reject the president’s party in midterm elections. The White House’s party lost seats in all but three of the past 26 midterm elections.

Chances are the midterm penalty will strike again in 2014. Democrats and Republicans are currently tied in national House ballot polls among registered voters, and over time the party not in the White House usually gains support. Add to this the fact that even in 2012 Democrats did worse among likely voters and you can see why the national tide will probably go against them once again. Perhaps the cliché should be, “It’s all about turnout, except for when it isn’t.”