The U.S. economy is starting to create more good-paying jobs. But the middle class is still lagging behind in both job growth and wages.

New data released by the Bureau of Labor Statistics on Wednesday showed that a wide range of jobs grew quickly in 2014. Personal-care workers — mostly low-paid workers like- manicurists and hairdressers — experienced the fastest growth of any major category. But construction jobs, which typically fall in the middle of the pay spectrum, and computer jobs, which are often highly paid, were close behind.

But the job growth wasn’t evenly distributed. As has been true for much of the nearly six-year-old recovery, hiring was strongest at the top and bottom of the pay scale. Overall, jobs at the extremes of the pay distribution — those where median pay falls in the top or bottom 20 percent of all occupations — have surpassed their prerecession peaks. Jobs in the middle 60 percent experienced slower growth and are still deep in negative territory.1

The good news for the economy is that the hollow middle is at least beginning to fill in. The gap in growth rates between jobs in the middle and jobs on the extremes was narrower last year than in previous years; in absolute terms, mid-tier jobs grew at their fastest pace of the recovery in 2014, as Josh Lehner, an economist at the Oregon Office of Economic Analysis, noted on Wednesday. 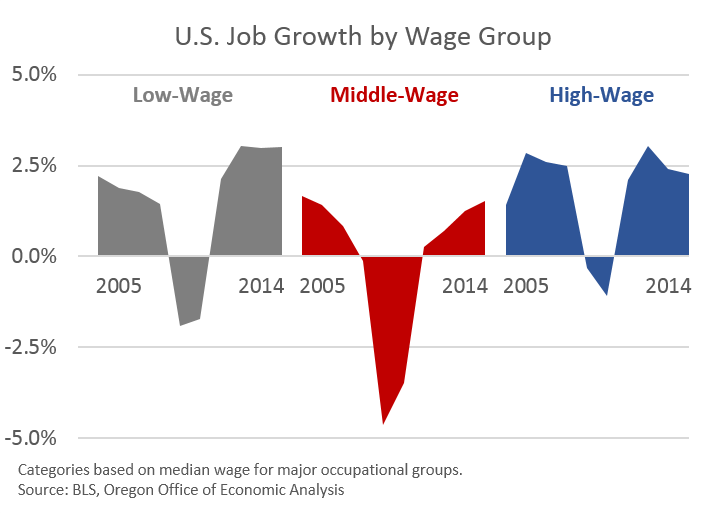 Wednesday’s data is from last May, so it doesn’t capture the more recent acceleration in hiring, or the accompanying evidence – still tentative – that wages may be starting to rise. But it’s worth attention because it provides details that are missing from the more up-to-date data released by the Bureau of Labor Statistics each month.

Most importantly, the monthly data only breaks down jobs by industry, lumping together a McDonald’s fry cook with the company’s chief executive. The annual data released Wednesday separates workers by their occupations. It reveals, for example, that the number of prosthodontists – a specialized type of dentist – more than doubled in 2014, while the number of travel guides fell by more than a quarter.

The data also provides more detailed information on wages, showing not only hourly pay but how that pay is distributed among workers. The typical real estate broker, for example, makes about $28 an hour, but there is a tremendous range, from about $11.50 at the low end to more than $85 at the high end.

Overall, the story is a familiar one: Wages are rising, but slowly, and more for some than for others. The median worker earned $17.09 an hour in May, up 1.3 percent from a year earlier; workers at the top of the pay scale saw faster growth than those at the bottom.

This U-shaped recovery – faster growth at the top and bottom, slower in the middle – isn’t a new phenomenon. What’s unclear is how long it will last. Mid-tier jobs are often the last to rebound in a recovery. It’s possible that with job growth now picking up, the pattern will begin to reverse, or perhaps has even begun to do so already.

But some economists have argued that longer-term forces, particularly automation and outsourcing, are having a polarizing effect on the job market, with high- and low-skilled jobs growing as those in the middle disappear. Many of the biggest job losses in recent years have been in back offices that once required an army of workers and are now done by software.

The job-polarization thesis is controversial among economists; liberal economist Lawrence Misel, among others, has pointed to data suggesting that at least by one definition, polarization hasn’t increased since about 2000. But at least in terms of wages, the recession and weak recovery have left a hole in the middle of the economy that is nowhere close to filled.