I have long considered former Maryland Gov. Martin O’Malley, who is kicking off his 2016 campaign Saturday, the longest of long shots. The barriers between O’Malley and the Democratic presidential nomination are virtually endless, but here are four:

But there’s a far simpler reason for why I’ve doubted O’Malley’s ability to compete: The people who know him best don’t like him. O’Malley is starting way down in the polls, and he’s not well known. And we have evidence that more O’Malley exposure doesn’t equal more O’Malley support. He earned just 3 percent (compared to Clinton’s 63 percent) in a poll of Democratic voters in Maryland conducted in October by The Washington Post and the University of Maryland.

If this strikes you as a surprisingly low percentage for a two-term Maryland governor and former mayor of the state’s most populous city, it should. It speaks to the fact that O’Malley was unpopular enough in deep-blue Maryland that by the end of his second term, Republican Larry Hogan came out of nowhere to defeat O’Malley’s lieutenant governor in the 2014 governor’s race.

Eventual nominees (excluding incumbent presidents) in the modern primary era have always led in early polling in their home states, even when they polled poorly nationally. Let’s run through the races where polling is available:

It’s clear that voters in candidates’ home states have been willing to support eventual nominees early on in the process, even when voters elsewhere haven’t. Increased name recognition probably explains some (or much) of the difference. But home-state support may also be a signal that voters there saw something presidential in these candidates.

So how are the other 2016 primary candidates polling in their home states? I took a RealClearPolitics-style average of live-interview polls since the beginning of the year or, if no polls meeting that criterion were available, looked to the most recent poll in each candidate’s home state.

The pattern is fairly clear: The candidates we think have a decent shot of winning their party’s nomination — Scott Walker, Marco Rubio, Jeb Bush and even John Kasich — are doing significantly better in their home states than they are nationally (with one exception: Clinton). 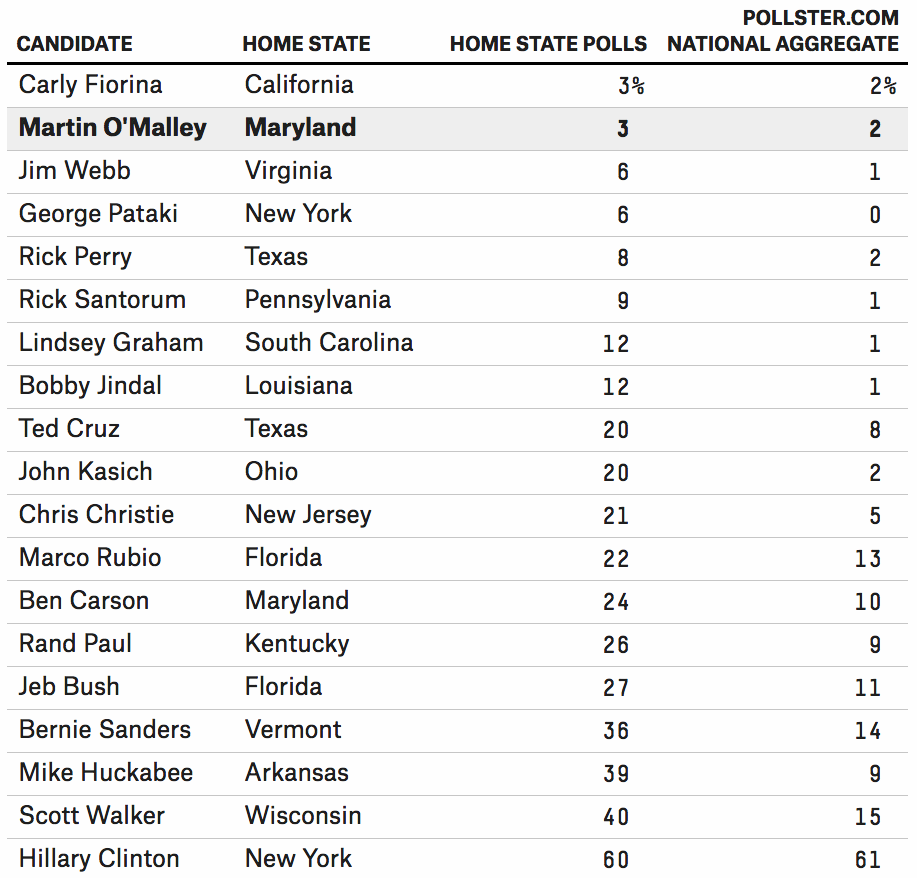 You could debate why Clinton isn’t doing any better in New York than she is nationally. But here are two thoughts: First, she’s doing amazingly well nationally — she can’t go much higher. Second, New York is Clinton’s adopted home state; in Arkansas, she’s polling in the 70s.

O’Malley, meanwhile, is at the bottom. Only Carly Fiorina matches him in lack of home-state support. Fiorina, of course, has only run for office once in California and has never served in any elected office.

O’Malley’s main competitor for second place in the Democratic primary, Bernie Sanders, got 36 percent of the vote and even led Clinton in an October 2014 Castleton Polling Institute survey of Vermonters. That points to a base of support that should allow Sanders to do fairly decently in the primary, even if he has little chance of winning.

O’Malley’s lack of support in Maryland may signal dark days ahead for his candidacy. Perhaps when his campaign gets going, he’ll show heretofore unseen skill in winning over voters. At this point, however, Maryland’s Democrats are telling us what every other indicator is: O’Malley is going to need a miracle in order to beat Clinton.

Check our our live coverage of the first Democratic Debate.