The Federal Reserve announced on Wednesday that it would bring its nearly 2-year-old bond-buying program, dubbed “QE3,” to an end; around $1.6 trillion was spent to stimulate the U.S. economy over the life of the program, and we’re not sure what it bought us.

In halting QE3, the Fed also gave the clearest sign yet that it’s OK for inflation to fall below its 2 percent target. And it flatly said it’s not so worried about current inflation readings despite evidence that low inflation can slow consumer spending and business investment.

At least one senior member of the Fed’s policy-setting body is concerned: Narayana Kocherlakota, president of the Minneapolis Fed. Kocherlakota dissented in Wednesday’s vote, citing the “continued sluggishness in the inflation outlook and the recent slide in market-based measures of longer-term inflation expectations.”

Kocherlakota’s reference to inflation expectations is important: It’s not just current inflation that worries economists, but beliefs about future inflation, too. We can gauge inflation expectations by looking at the premium investors pay for inflation-protected Treasury bonds. The future rate of inflation, according to these measures, has fallen to around 2.3 percent over the last month from 2.6 percent in August and 2.8 percent at the start of 2014.

Why should you worry that prices won’t increase fast enough? Outright deflation can be poisonous to an economy, as it was for the United States during the Great Depression. If money is worth more tomorrow than it is today, then consumers will hold off spending, reducing demand, sparking further price cuts and thus triggering a cycle of falling prices and stagnating growth.

But even short of deflation, low inflation can wreak havoc, too. In last week’s issue of The Economist, Greg Ip outlined the dangers of low inflation. The chart below, taken from Ip’s briefing, shows just how widespread low inflation has become across rich countries. 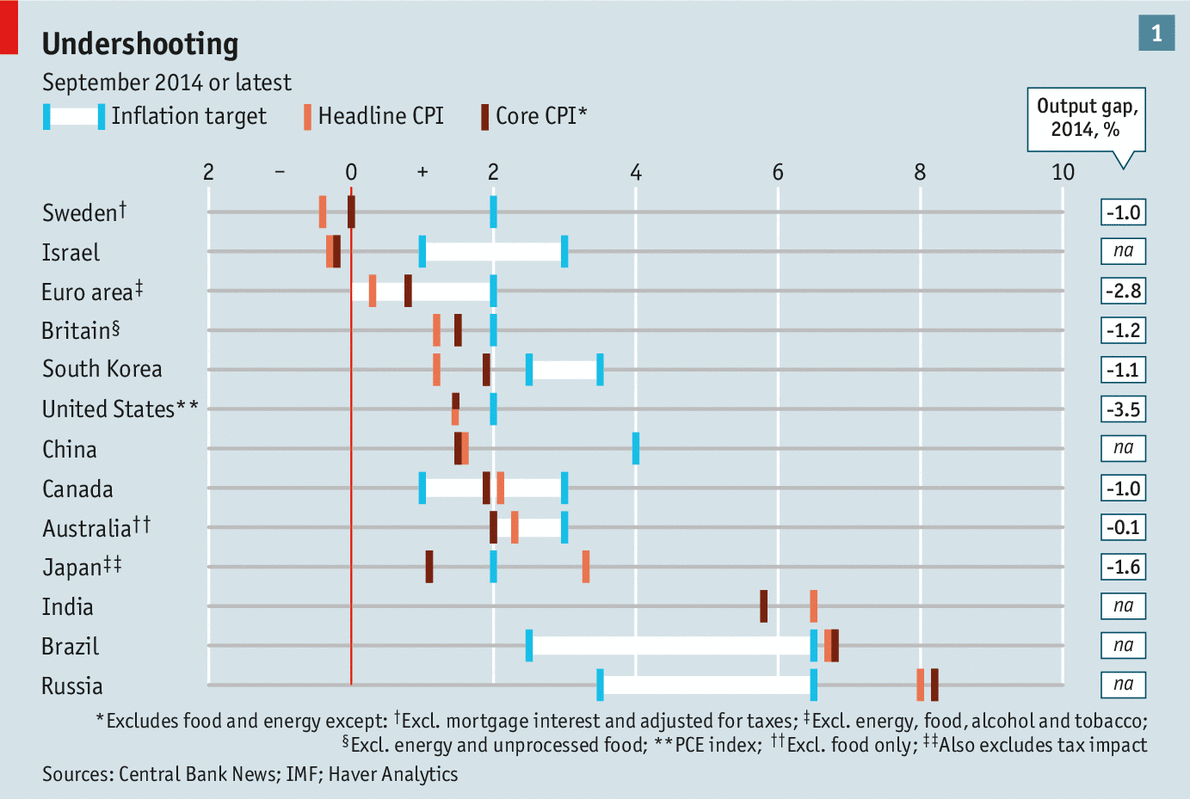 The consumer price index is currently running about 1.8 percent higher than its level a year ago — below the Fed’s target of 2 percent. But the Fed doesn’t appear to care (aside from Kocherlakota). In its statement on Wednesday, the Fed’s policy committee noted it thinks “the likelihood of inflation running persistently below 2 percent has diminished somewhat since early this year.”

Let’s hope this risk has receded. But the numbers don’t fully bear that out.