And now, another round of FiveThirtyEight’s “totally subjective odds” — when our analysts get together and riff on the little data we have to handicap the 2016 presidential nomination from each party.


Listen in the player above. See the full odds, plus some choice quotes, below. 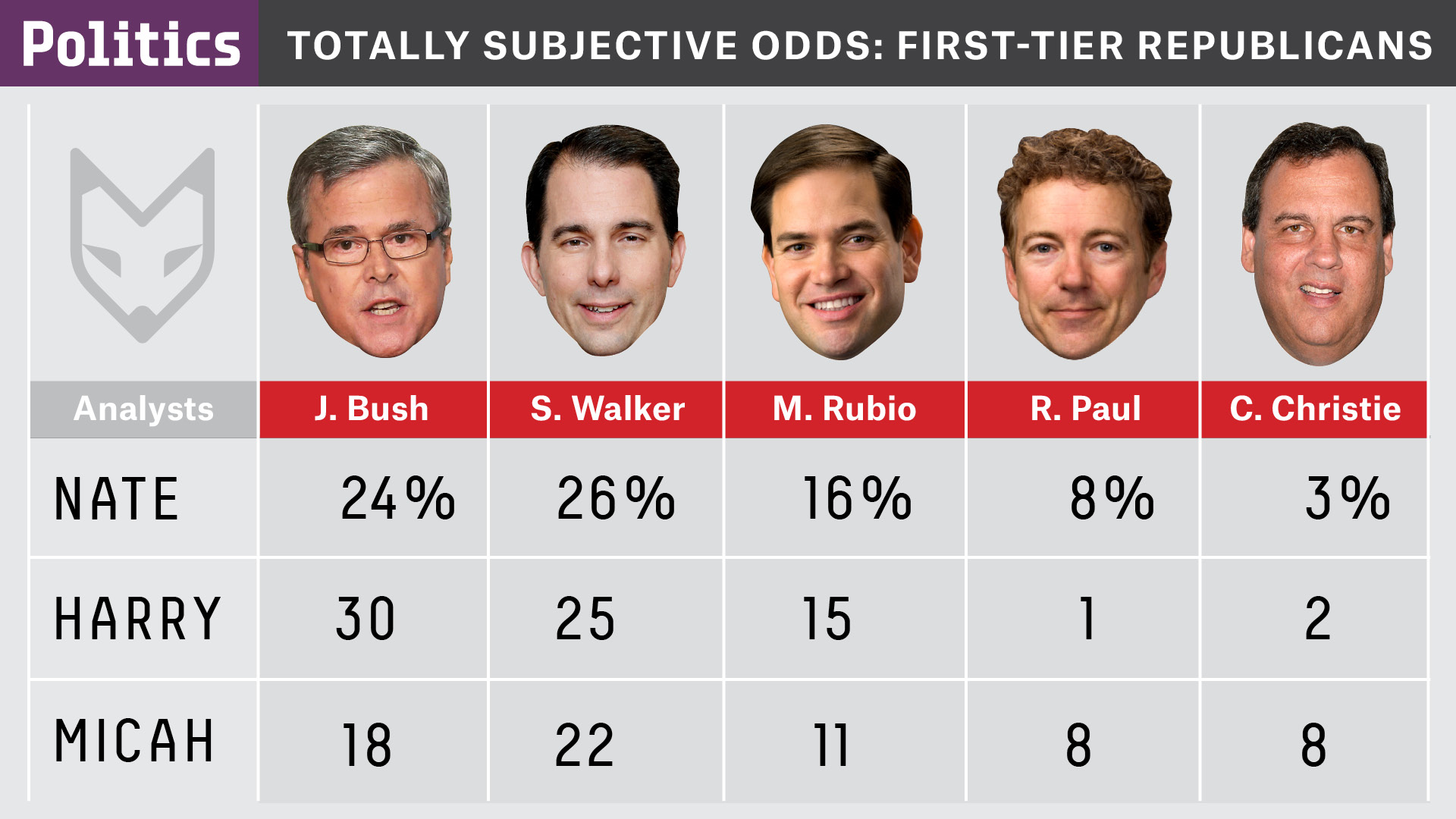 Is Scott Walker The New Favorite?
Harry Enten: “I’m not sure if he has what it takes to run a national campaign. I mean, you’ve seen these types of things where he makes foreign policy statements that make you go ‘huh.’ And the real question is, when the press gets going and the press starts eating at him, will he be able to maintain this conservative rhetoric that doesn’t sound crazy. It’s a fine line between those two.”

Nate Silver: “But it is also March, and he is – along with Bush – very actively seeking the nomination. Obama made a lot of mistakes in March of 2007. You have time to iron these things out.” (at 5:40)

Nate: “His numbers are in Donald Trump territory in some of these polls… he’s not a top tier candidate for me.” (8:55)

Nate: “I’ve become more convinced that if either Bush or Walker proves flawed – and they both have issues – that Rubio becomes the alternative.” (13:00) 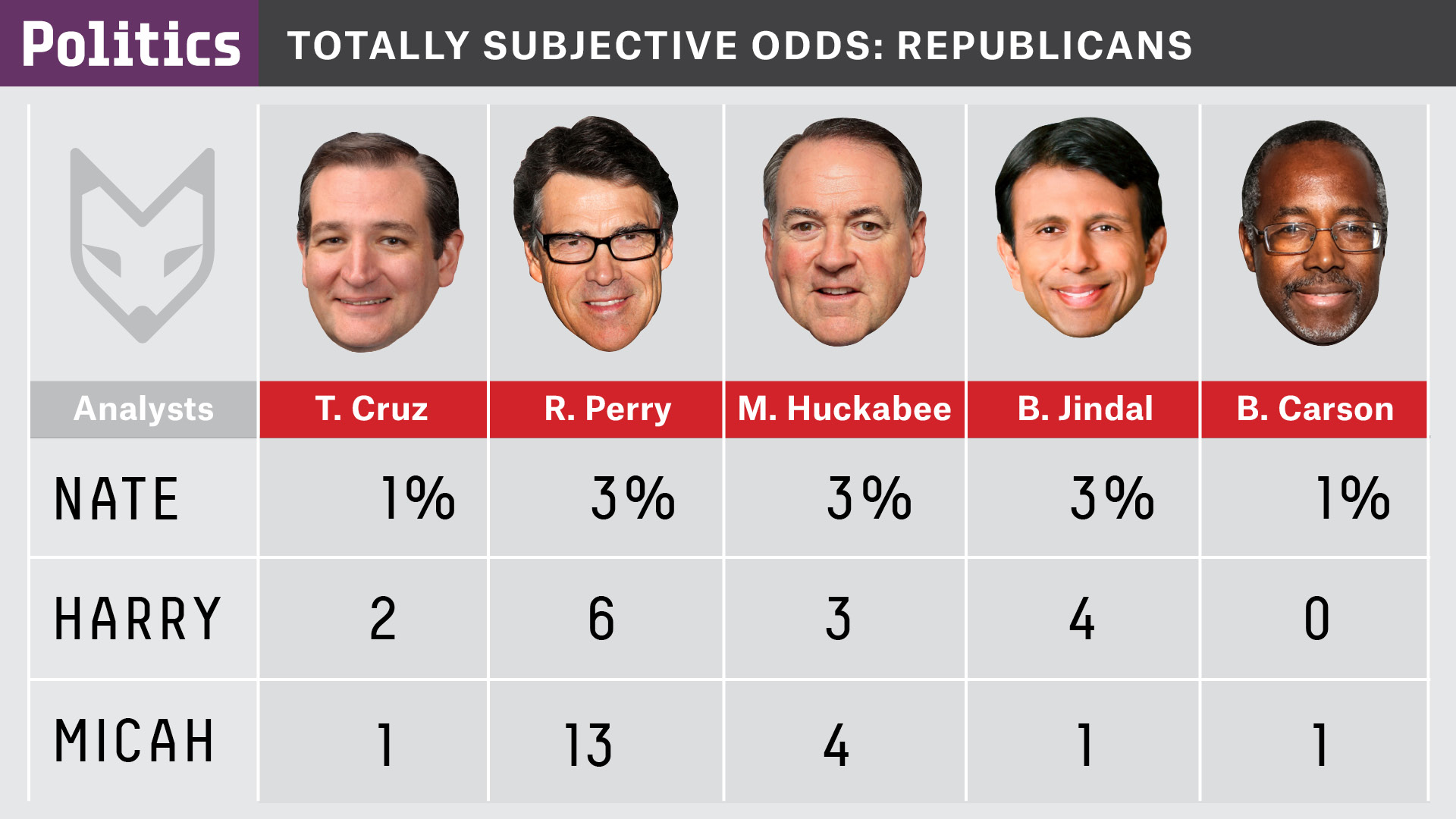 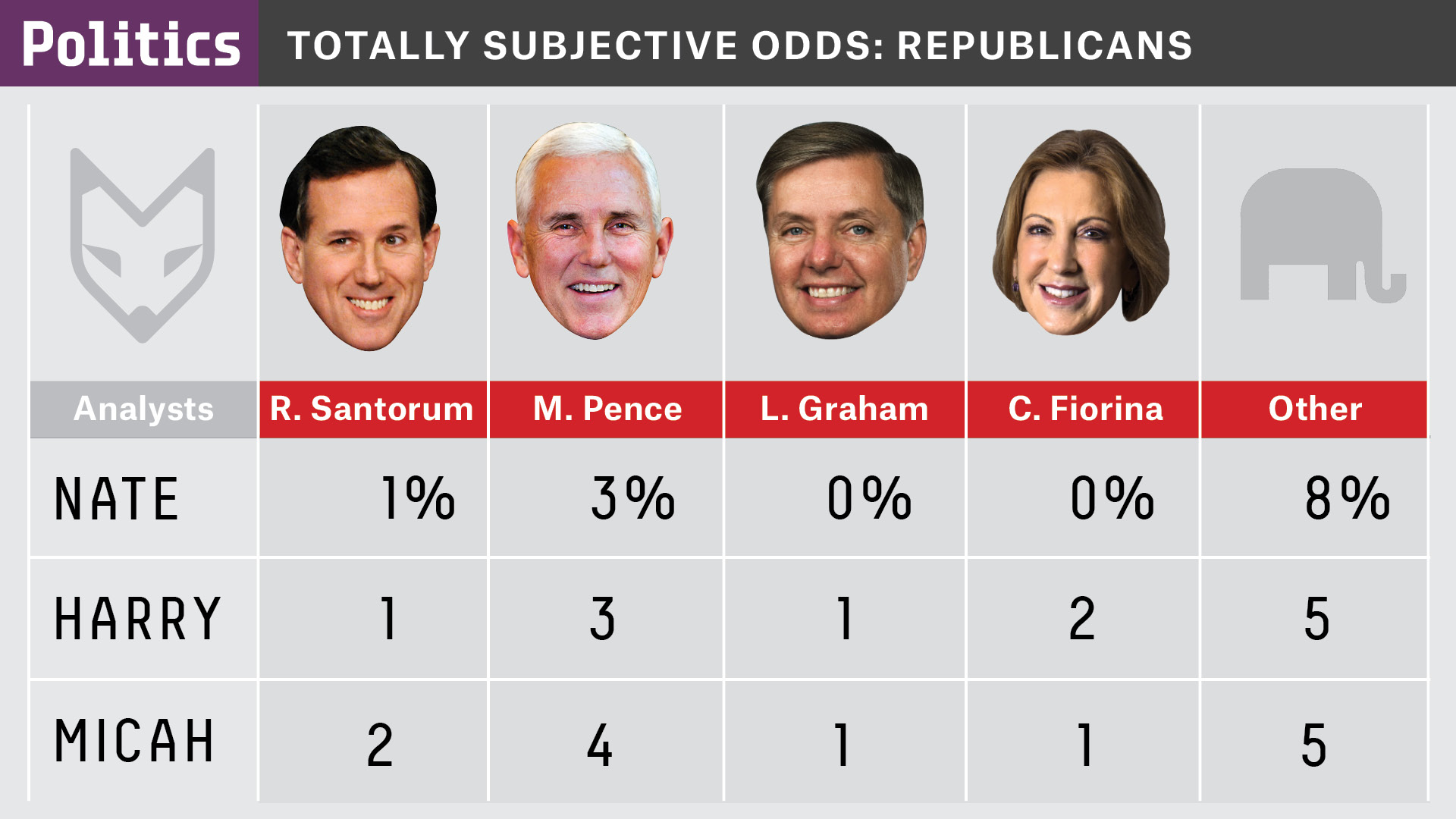 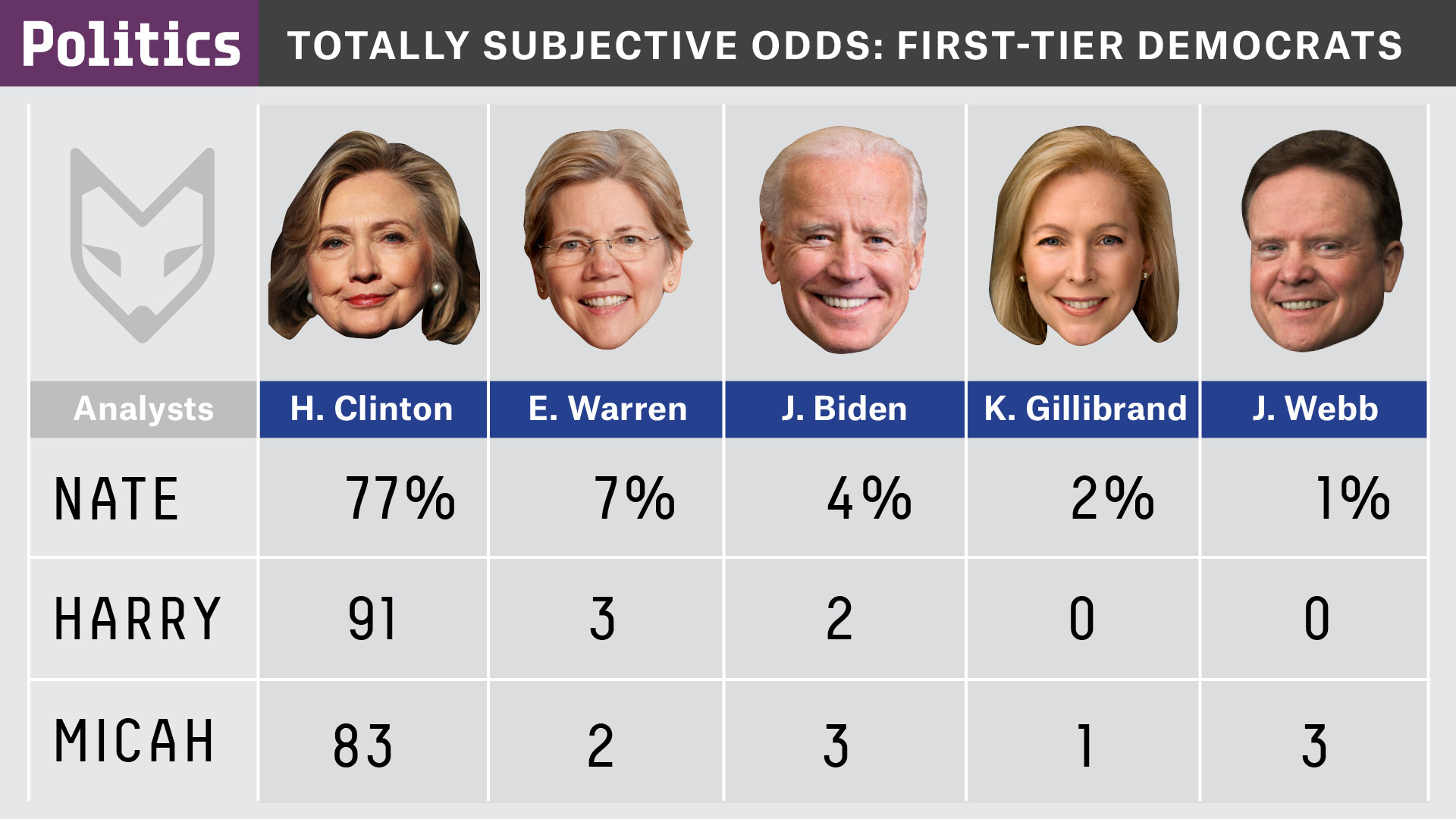 The Email Scandal That Wasn’t

Nate: “I don’t see a huge impact from the email scandal. On the one hand it’s triggered a lot of attention. On the other hand, it’s not clear voters are that concerned about it. And it should have been an opportunity for some other Democratic candidate to surface … for Elizabeth Warren or Martin O’Malley to leak a story to Politico to say ‘Hey I’m serious about running here’ … and you haven’t seen much of that at all.” (17:00) 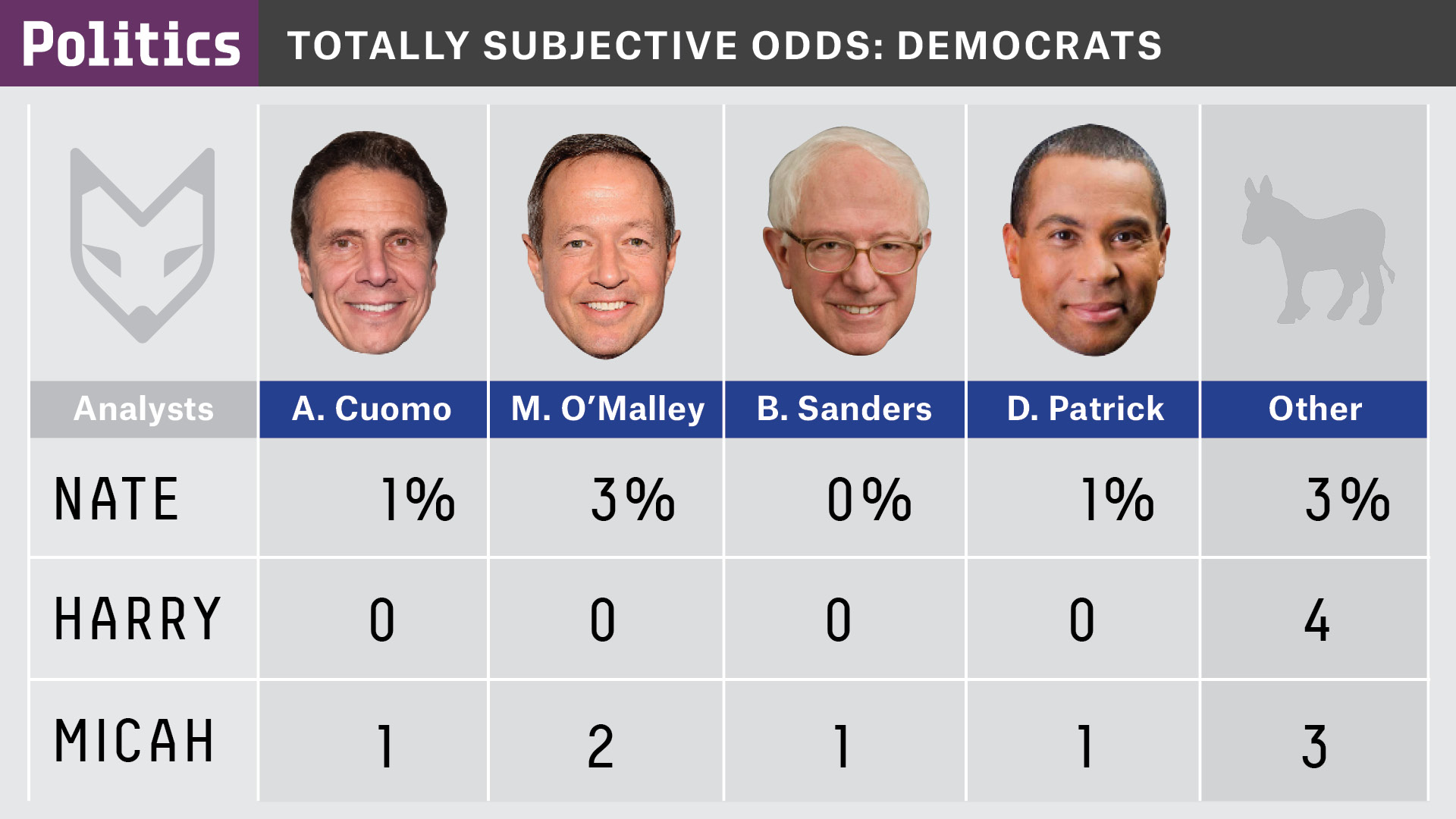 (This is part of our podcast experimentation here at FiveThirtyEight, where we’re posting audio of different kinds on SoundCloud. Our proper politics/economics/lifestyle podcast will launch later this spring on iTunes, Stitcher and everywhere else you get your favorite shows. Our sports podcast Hot Takedown is now available. And let us know what you think by tweeting our podcast producer/host, @jodyavirgan, or emailing us.)