LeBron James predicted the new-look Cleveland Cavaliers, featuring himself and new Cav Kevin Love, would take a while to hit their stride. (“A couple of months and maybe a few,” as he put it last month.) He appears to have been correct: After starting 19-20 — with enough ups and downs that at times some commentators prematurely declared the Cavs to have gelled — Cleveland has won eight straight games, including impressive victories against the Clippers, Bulls, Thunder and Trail Blazers.

We’re pretty sure that when James made that prediction, he wasn’t running regressions on historical NBA data. That’s because we tried, and we couldn’t find much evidence to back up the conventional wisdom.

It makes sense that teams with lots of new players in major roles would get better during the season, as the new teammates get used to playing with one another. There just isn’t much statistical evidence to back up that theory — partly because it’s unusual for a team as good as Cleveland to rely so heavily on new arrivals.

To study whether teams like Cleveland gel later in the season than more stable clubs like San Antonio, we looked at the fate of 939 older teams — those that played 82-game seasons back to 1978. To estimate how much of their contribution they were getting from newbies, we divided the total wins above replacement (WAR) of new players by the team total, omitting players who were below replacement value. Then we divided up the first 80 games of each season into 10 eight-game buckets — omitting the last two games because some teams rest starters — and checked how each team did, in each bucket, based on their opponent-adjusted point differential.

Part of the problem we had is that there haven’t been many teams that relied on new players as much as the Cavs do. They’ve gotten 63 percent of their WAR from new guys. That’s more than all but 48 teams in our data set — a group that doesn’t include James’s first Miami team, which got 57 percent of WAR from new players (the Heat peaked between Games 17 and 24). And most of those teams were lousy clubs, presumably rebuilding with rookies and cheap castoffs. Their average Pythagorean winning percentage was 36.3 percent.

We nonetheless zoomed in on teams similar to Cleveland and found there is a small pattern of playing worse early and better at midseason, which fits the conventional wisdom. But it’s likely just noise. The only statistically significant difference was for the final 10-game chunk we studied, in which teams like the Cavs did a lot worse than average — which runs counter to the conventional wisdom of gelling and improving with time playing together. 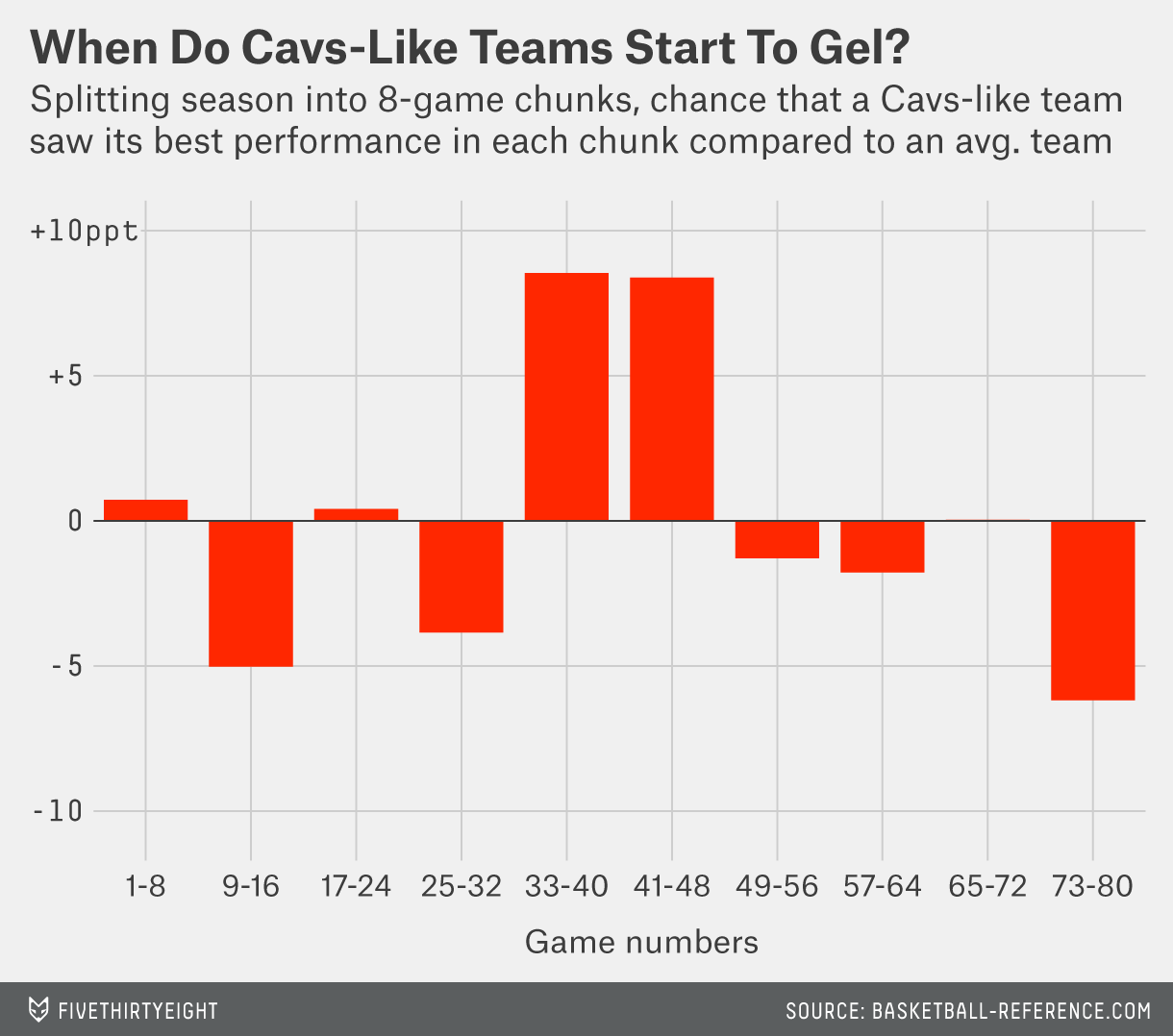 The lesson seems to be that a team starring James, Love and Kyrie Irving playing together for the first time might really need some time to gel, but there aren’t enough teams like the 2014-15 Cavaliers to say that their experience is typical. (One other possible reason it’s hard to detect much of a relationship: Some teams — like the Cavs — get new contributors at the start of the season, while others start playing rookies and midseason trade acquisitions late in seasons that are lost causes.)

As is often the case in sports analysis, we have to trade off precision for sample size, and in this case the sample of teams like the Cavs is too small for the stats to beat the intuitive prediction of James.