On Sunday afternoon, LeBron James offered another reminder of how silly it was to ever doubt his performance in the clutch.

After the game, ESPN’s Brian Windhorst tweeted that James has now made more go-ahead shots at the end of playoff games than Michael Jordan. (It’s not the only area in which James is Jordan’s statistical peer in the postseason.)

Windhorst’s definition for what constitutes a game-winning shot is as good as any — it covers all potential go-ahead field-goal attempts with five or fewer seconds remaining in the fourth quarter (or overtime) of playoff games. At Basketball-Reference.com, I was able to find 10 such attempts for James: five makes and five misses.1 How does that stack up to other playoff performers over the years?

Unfortunately, Jordan’s playoff career predates BBR’s shot-by-shot database by three seasons, but the site does have a record of every such shot attempted since the 2001 playoffs. And in those go-ahead situations (after accounting for the leverage of the game in which each shot occurred), nobody has a better record relative to expectations2 than James — particularly not his longtime nemesis Kobe Bryant, who sits at the opposite end of the list. 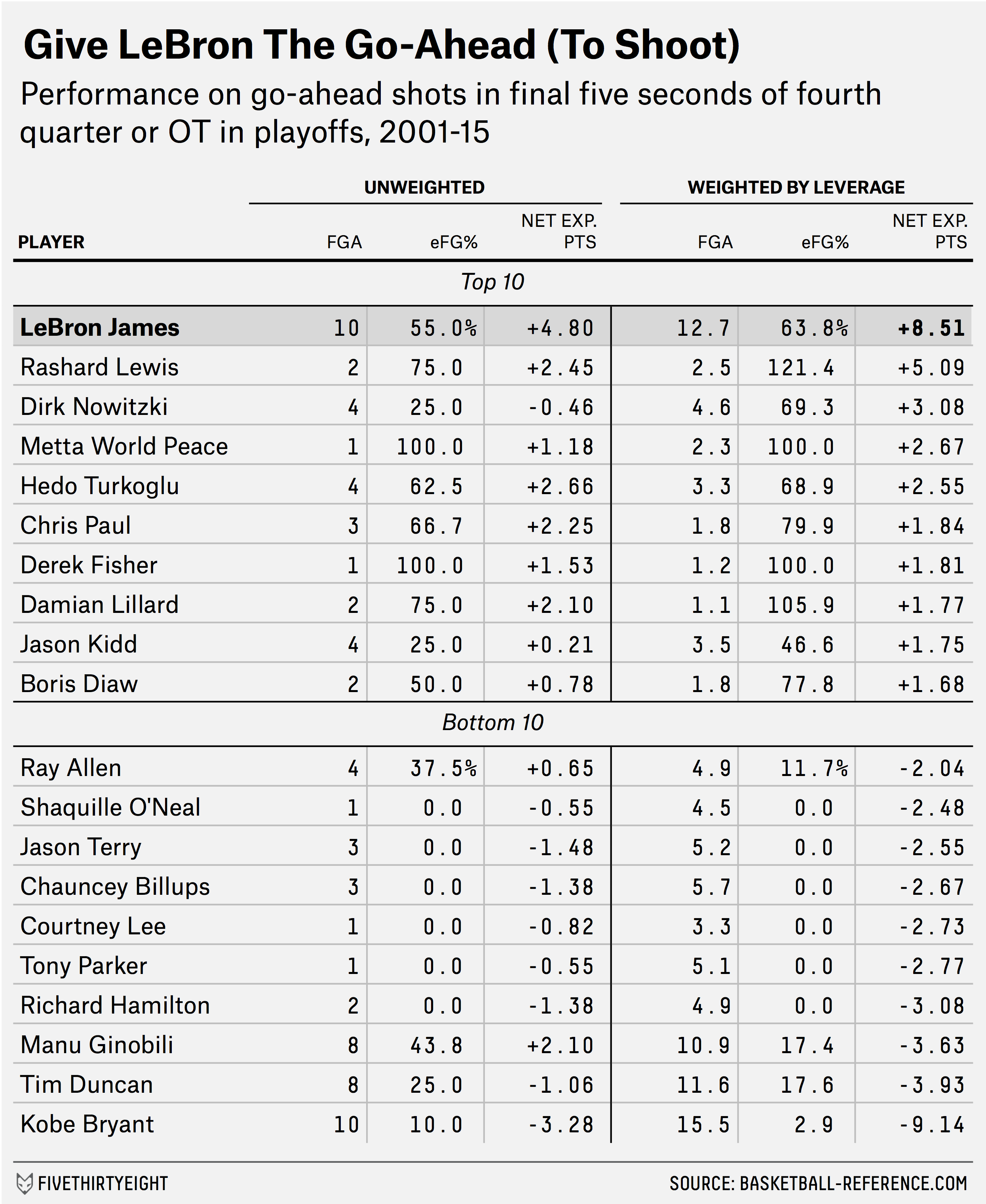 Relative to the league-wide average, James generated 4.8 more total points than expected on his go-ahead shots, which translates to about one entire playoff win beyond what an average shooter would have contributed from the same field-goal distances. And those numbers become magnified when you consider that James’s average go-ahead shot came in a playoff game with championship implications 34 percent greater than the typical postseason contest. After we weight by the leverage of his specific game-winning shot attempts, James generated the equivalent3 of 8.5 more points than expected, or roughly two playoff wins above average, with his clutch end-of-game shooting alone.

(By contrast, Bryant generated 3.2 fewer points than expected and did it in games that were about 64 percent more important than the average playoff game, compounding the damage of his 1-for-10 performance.)

So there’s no doubting James’s history of knocking down big playoff shots. But what’s also interesting about the list above is that the trailing section contains slightly better players, on balance; the bottom 10 players have tallied 1,090 wins above replacement (WAR), versus 987 WAR for the top 10.

Granted, there’s essentially no relationship between career WAR and leverage-weighted net expected points for the entire sample of players … but maybe that’s the point. Role players can be called upon to hit huge shots with championship implications just as readily as stars. While James (and Dirk Nowitzki, and Chris Paul, to name a few) are all-time greats, the fact that the likes of Rashard Lewis and Metta World Peace also rank so highly — and Bryant fares so poorly — might speak as much as anything else to the unpredictability of who steps up and changes the course of NBA history with a clutch shot or two.

One thing’s for sure, though: James has shown that he’s better at knocking down such consequential buckets than any other player of his generation.