LeBron James’s Cleveland Cavaliers might be trailing the Golden State Warriors 3-2 in the NBA Finals. The Cavs might, as their Vegas odds suggest, have a mere 12 percent chance of winning the NBA championship. But according to just about every statistical measurement available, the self-proclaimed “best player in the world” is having a series for the ages.

Build a bare-bones performance metric that simply adds a player’s points, rebounds and assists and then divides by the number of games the team played,1 and James’s 2015 finals ranks as the best of the past 30 years. 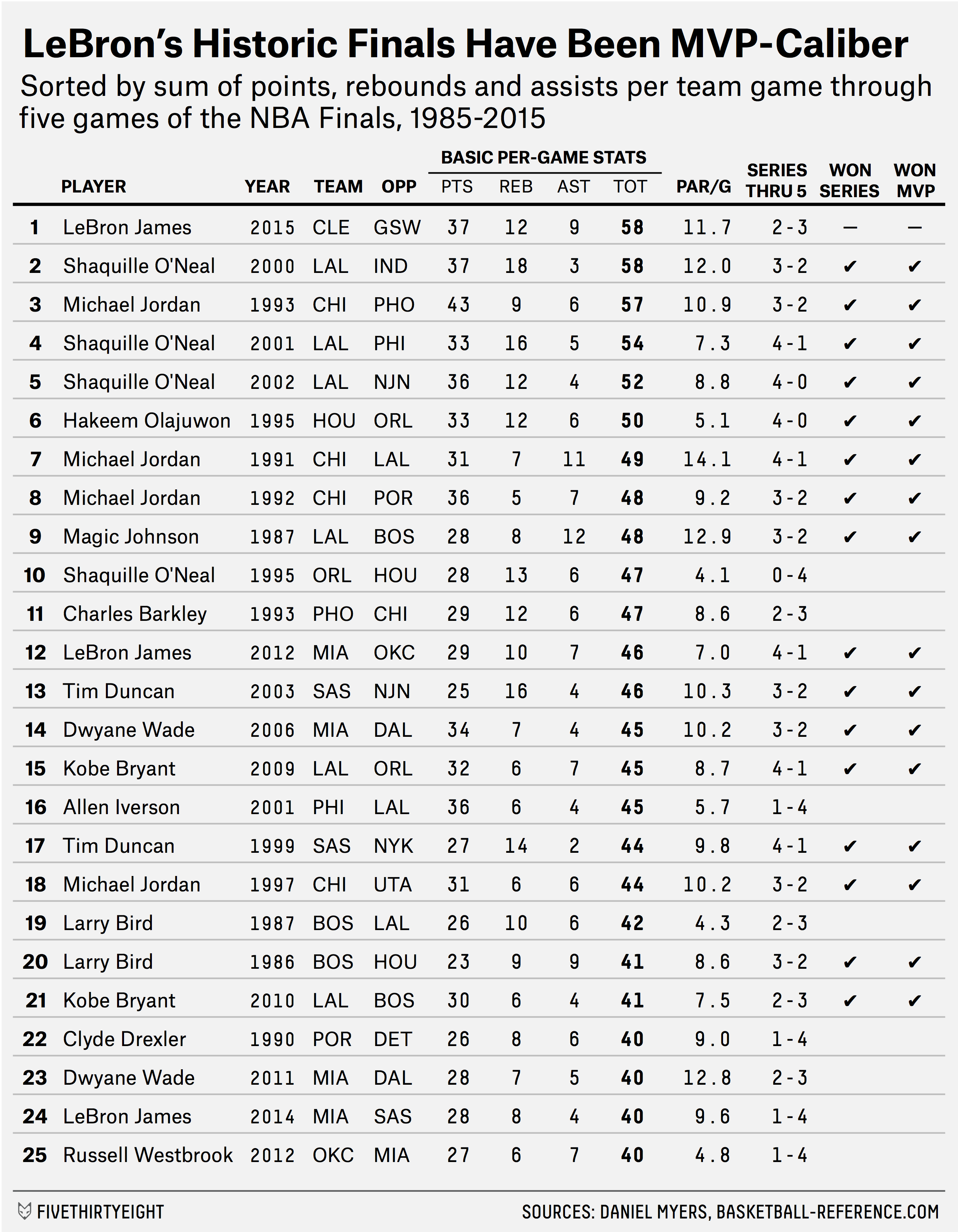 Get more complex — using, say, a points above replacement (PAR) estimator based on the single-game version of Daniel Myers’s Box Plus/Minus2 — and James ranks sixth among all NBA Finals participants since 1985.3

So at either pole of the complexity spectrum, James has been the top player of these finals. (Neil Greenberg of the Washington Post and ESPN Insider’s Kevin Pelton came to similar conclusions using a few more metrics of varying intricacy.) And from a historical perspective, output of this level usually leads to winning the NBA Finals and the NBA Finals MVP: Every player near James’s combined total of points, rebounds and assists ended up garnering MVP honors.

In a vacuum, then, James’s performance has been so historically strong that it would be a shame for him not to win the award.

But on the other hand, if the Warriors win the series and the MVP goes to James, it will be the first time that a member of the losing team has received the honor since 1969, when Jerry West of the Los Angeles Lakers won in spite of the Boston Celtics’ championship. And, as Pelton notes, the culture of denying MVP honors to a nonchampion has grown in the intervening years, across all sports.

In the NBA alone, nine players since 1985 have been the best player in their series by PAR through five games yet failed to win the MVP after their teams lost. (To a certain extent, this also speaks to what can happen between Games 5 and 7 of a series between closely matched teams.) In 2011, Dwyane Wade — then James’s teammate on the Miami Heat — outplayed Dirk Nowitzki to a greater extent than James has outplayed presumptive Warriors MVP candidate Stephen Curry4 thus far yet still lost the award to the Dallas Mavericks star. So as great as James has been, it might not be enough to justify the award if Cleveland loses the series.

There’s one more angle to think about, though, when it comes to James’s 2015 finals performance. It may be that all our stats and metrics simply break down when forced to consider the unparalleled burden that James has been forced to carry on this undermanned, undertalented Cavaliers squad. James’s 41.1 percent usage rate in this series is the largest of any finalist since 1985, breaking Michael Jordan’s mark of 39.6 percent for the Chicago Bulls against the Phoenix Suns in 1993. James is also logging an incredible 45.6 minutes per game, the eighth-most of any qualified5 finalist since 1985. 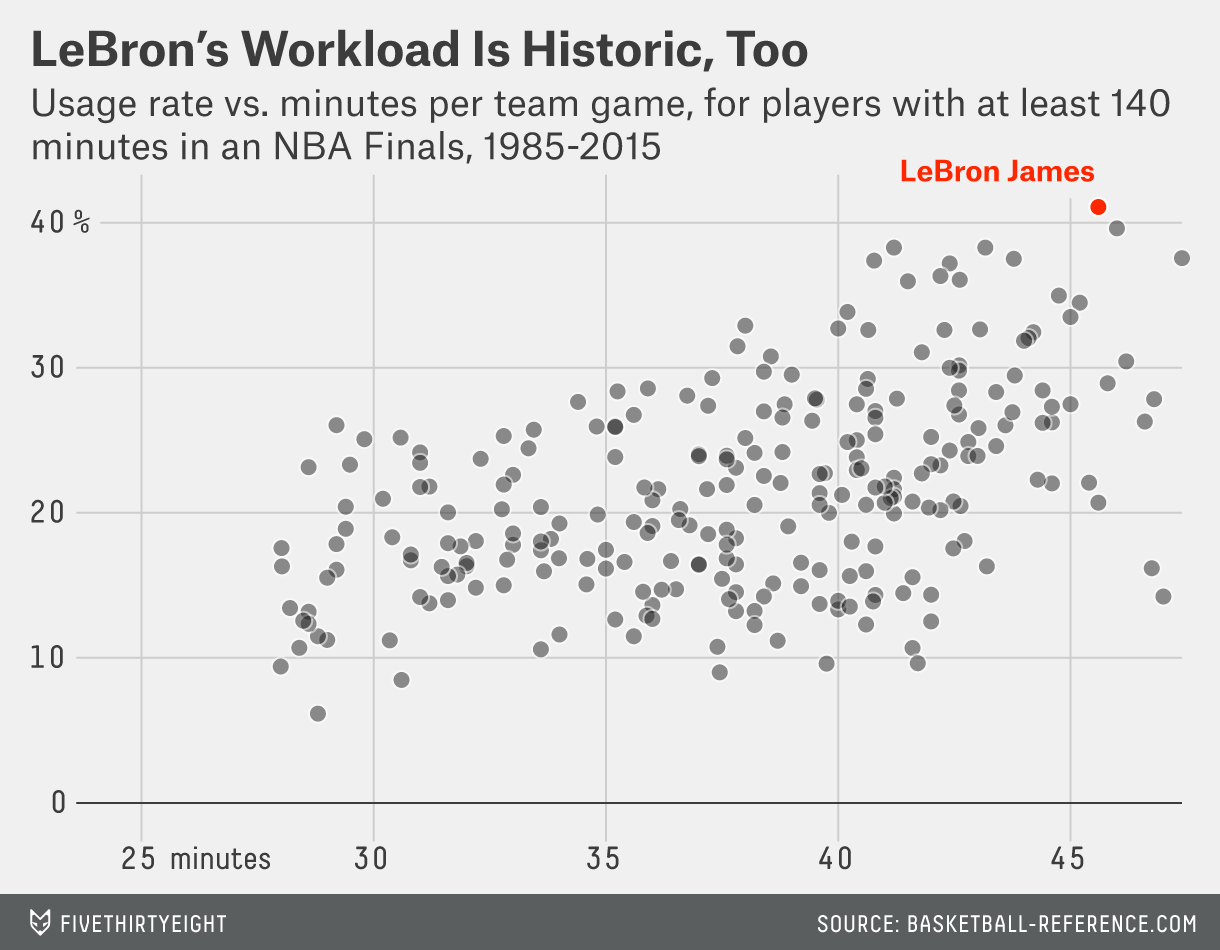 As Tom Haberstroh wrote over the weekend, James’s physical workload during these finals has been termed “unfathomable” (among other things) by sports science experts. At the limits of human endurance and on-court influence — through his shooting and passing, James was involved in 70 of Cleveland’s 91 points in Game 5 — there may be no numbers that can do justice to how irreplaceable James has been for the Cavaliers in this series.

They don’t necessarily give out awards for being completely and utterly essential to your team, of course. And, as always, “value” is in the eye of the beholder. But whether the Cavs win or lose, it’s not hard to imagine this series going down as a testament to James’s singular talent, stamina and durability. And if that doesn’t constitute “value,” I’m not sure what does.