On Thursday, the NBA announced the final results of fan balloting for the 2015 All-Star Game, to be held in New York City on Feb. 15. The fans’ votes determined which players — specifically, two guards and three frontcourt players — will start for each conference. (Reserve selections are made by the league’s head coaches and will be announced next Thursday.)

Some of the results were beyond dispute. For instance, Golden State’s Stephen Curry led all NBA players with more than 1.5 million votes, an honor thoroughly befitting the current league leader in Real Plus-Minus (RPM). Others were less supportable; Kobe Bryant garnered more votes than all but three players despite sub-replacement level play this season, while Carmelo Anthony was elected an Eastern Conference starter despite his Knicks’ well-documented awfulness.

The fans have a long history of casting votes for big names playing subpar ball, and it’s clear there’s not a perfect relationship between All-Star voting and actual on-court value. To see what kind of link exists between the two, I plotted vote totals against RPM wins above replacement (WAR) for the 50 players whose results were released Thursday. For a sense of how many WAR are generally needed to earn a given number of votes, I also ran a local regression between the two numbers. 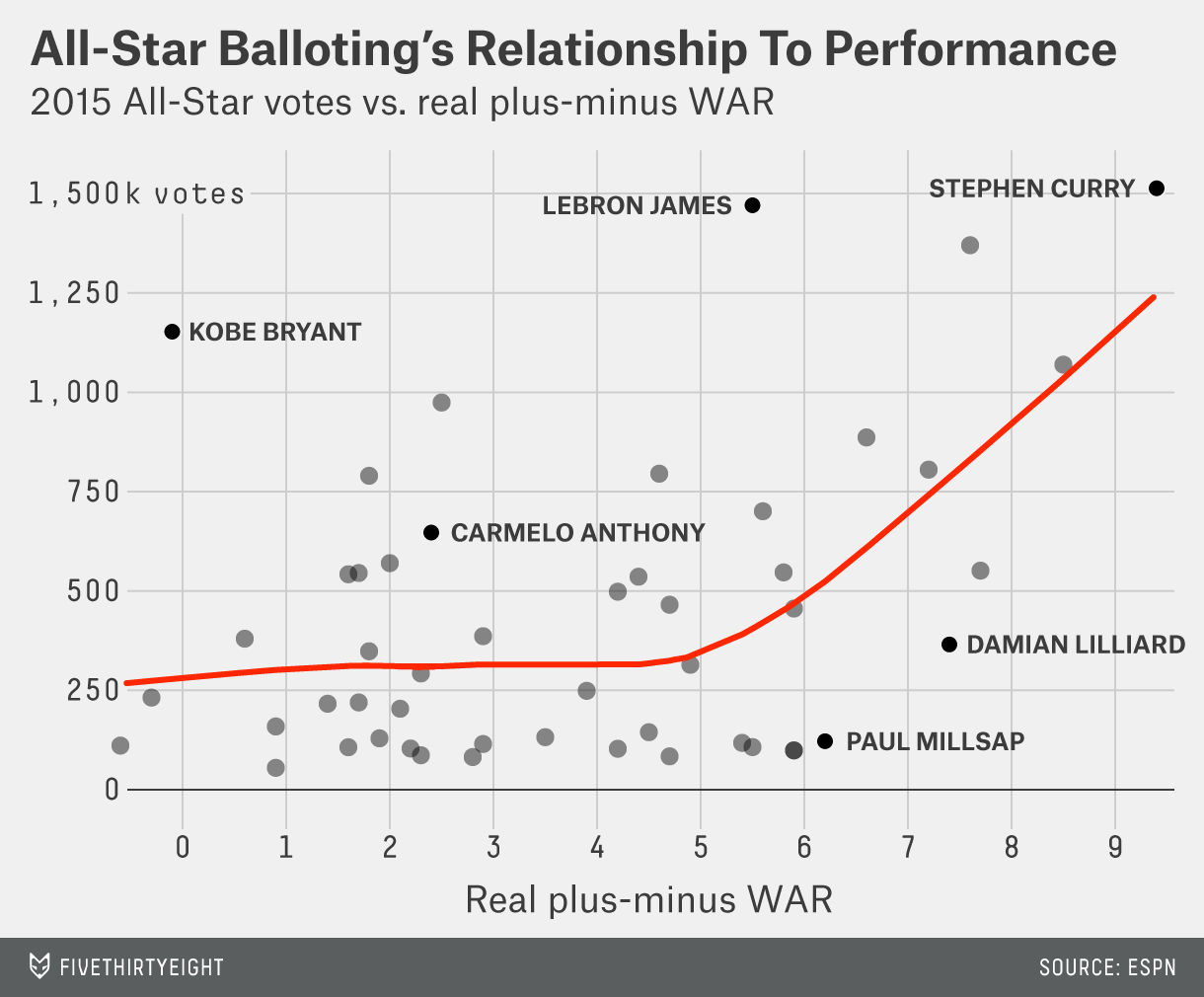 The relationship between voting and WAR isn’t particularly strong, especially for players with fewer than 5 WAR. Once a player is beyond that territory, it appears he can at least begin to grab voters’ attention with better play. But for players below that threshold, performance can be lost in a sea of other confounding factors.

Bearing in mind that rather large caveat, the most underrated player in the sample was the Portland Trail Blazers’ Damian Lillard; his 7.4 WAR appears to deserve nearly 800,000 votes, but he amassed less than half that. Similarly, Paul Millsap of the Atlanta Hawks was picked on only about 122,000 ballots, despite a WAR total that would seemingly justify over four times as many votes.

At the other end of the spectrum, Bryant certainly looks overvalued — his 1.15 million votes were about four times what would be expected from his WAR total. But the player with the biggest disparity between actual and predicted voting this season is Kobe’s old rival LeBron James. James’s 5.5 WAR seems to correlate with about 412,000 votes — roughly the same as what the Chicago Bulls’ Jimmy Butler compiled (and deserved) in the balloting — but James’s actual total of 1.47 million beat that prediction by more than a million votes.

Here’s each player’s vote total compared to what would be expected based on WAR: