The 2020 presidential election just got its first notable third-party challenger. Last Tuesday, Michigan Rep. Justin Amash, who left the Republican Party nine months ago and became an independent, announced he would run for president as a Libertarian. And while we won’t know whether Amash wins his new party’s nomination until later this month, here’s what we do know about third-party candidacies more broadly and what that could mean for President Trump and former Vice President Joe Biden in the general election. 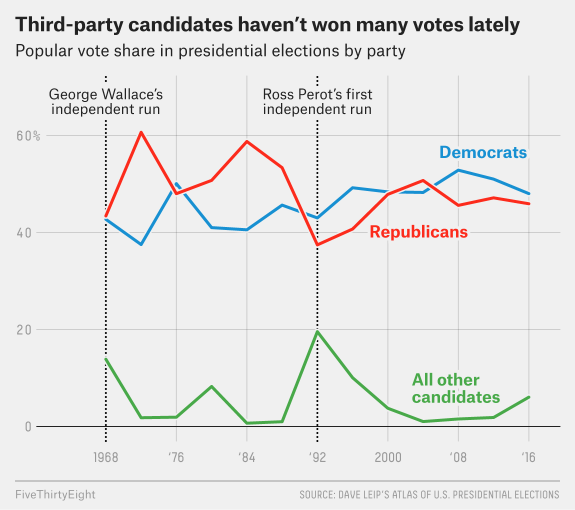 However, that doesn’t mean Amash (or other third-party contenders) won’t matter in November. In this era of close elections, small shifts in the margins can matter a great deal to the final result, and third-party contenders can play a part in that. Amash’s candidacy, in particular, could affect the margins in some key battleground states, including his home state of Michigan, which was pivotal to Trump’s victory four years ago. Consider what happened in 2016: In 11 states, Libertarian nominee Gary Johnson’s raw vote total exceeded the vote margin separating Trump and Hillary Clinton. Now, that doesn’t mean Johnson necessarily changed who won in each of those states, but he and other third-party contenders (like Jill Stein of the Green Party) may have helped shape the outcome, especially in the three states that proved decisive in the Electoral College: Michigan, Pennsylvania and Wisconsin.

So who might Amash’s candidacy hurt more in 2020 — Biden or Trump? This is a hard question to answer, but there are some reasons as to why an Amash bid might hurt Trump more than Biden. Estimates vary for how many Americans are “libertarian” — perhaps anywhere from 4 percent to 22 percent of the public — though most voters back one of the two major parties, so we’re not talking about a huge portion of the electorate. That said, there is evidence that more libertarian-minded voters are more likely to vote Republican than Democratic, which could cost Trump at the ballot box.

What’s more, a relatively high-profile Libertarian nominee like Amash could be more successful in attracting some GOP-leaning voters away from Trump. This group might include the small slice of conservative and/or Republican voters — including some “Never Trumpers” — who may be uncomfortable with Trump or even dislike the president. These voters in particular might like Amash because of his conservative record, support for limited government and long-standing opposition to Trump — for instance, he was the only non-Democrat to vote for Trump’s impeachment in the House.

Still, an Amash bid could still present problems for Biden, too. If 2020 is a referendum election on Trump’s presidency, Biden may not want another well-known candidate in the race to give potential anti-Trump voters a different choice. Polls have long shown that a majority of voters prefer an alternative candidate to Trump, but that doesn’t mean that alternative has to be Biden. So it’s possible that Amash could win over some of these voters, lowering Biden’s ceiling and narrowing the race between the major-party nominees. Trump seems to have adopted this view, responding to Amash’s announcement by egging on the congressman and comparing him to Stein, who some on the left think spoiled the election for Clinton in 2016.

And looking at the Electoral College, Amash’s impact could be most deeply felt in Michigan, where he could actually win enough votes to influence the outcome. We would expect Amash to win a larger share of the vote in his home state, considering Johnson did his best in 2016 in New Mexico, where he’d been a two-term GOP governor, winning 9 percent of the vote. Amash, unlike Johnson, hasn’t held a statewide office, but he probably would still have an advantage in the western part of Michigan, which he’s represented in the House for nearly 10 years. That could get in the way of Democrats’ hopes of making gains in traditionally Republican Kent County — Amash’s base and home to Grand Rapids — because of its sizable share of college-educated voters. While Biden has led most early Michigan polls, Amash could complicate the race there.

But it’s also possible that 2020 might just not be that good of an environment for third-party candidates. One reason for this comes down to a familiar feature of American politics: partisan polarization. Take 2016. On the one hand, it probably should have been a better year for third-party candidates, as political science research shows that third-party support is often strongest when partisans dislike their parties’ nominees but don’t want to cross over and vote for the other major party. But as we saw in 2016, two historically unpopular nominees weren’t enough to dampen support among partisan voters and create a meaningful movement around an alternative. And some of this may be due to negative partisanship — or voters staying fully loyal to their party rather than casting a protest vote because they loathe the idea of the other party winning more.

It’s also possible that there just isn’t enough overlap between the two parties in 2020. The parties are ideologically distinct and very attuned to their activists on cultural and social issues as well as economic ones, meaning there is less opportunity for a third-party candidate to make a dent in the electorate. For instance, one reason Perot emerged in the 1990s as such a strong alternative is both Republicans and Democrats were still struggling over the role economic and identity issues would play in their respective parties, with Republicans split between traditional (George H.W. Bush) and culturally conservative (Pat Buchanan) camps. Democrats were also split, searching for their ideological identity after 12 years out of the White House, ultimately turning to the center with the nomination of Bill Clinton. These are the kinds of conditions that often make a third-party bid successful, but they also require some fluidity in the party system that might not be there today.

Ultimately, the evidence is mixed about whether an Amash run on the Libertarian ticket would make much of an impact on the general election outcome. And it remains to be seen whether Amash has the potential to become the next Perot, or whether his candidacy will look more like that of Johnson or Ralph Nader. One thing shared across many of these third-party bids is this, though: They didn’t go well for the incumbent party in the White House.

Julia Azari is an associate professor of political science at Marquette University. Her research interests include the American presidency, political parties and political rhetoric. She is the author of “Delivering the People’s Message: The Changing Politics of the Presidential Mandate.” @julia_azari