More than anything else, the Green Bay Packers of recent vintage have been known for an explosive offense. Only the New England Patriots have scored more points over the past five seasons, and ESPN’s Football Power Index projected that the Packers would own the league’s top-rated attack in 2015.

But that was before the news that a season-ending ACL injury had taken out Jordy Nelson, football’s second-best wide receiver by the numbers. Now the Packers will have to make do without him — and in the process stage a natural experiment over how much credit a receiver should get in an offense that also features a great quarterback.

That great QB: two-time NFL MVP Aaron Rodgers. Most would argue that he’s the engine that makes Green Bay’s offense go. But among Rodgers’s supporting cast, the most statistically decorated is almost certainly Nelson,1 who among wide receivers ranked second only to Pittsburgh’s Antonio Brown in ProFootballFocus.com’s play-by-play grading system and FootballOutsiders.com’s Defense-adjusted Yards Above Replacement (DYAR)2 over the past two seasons. (He ranked third, behind Brown and Denver’s Demaryius Thomas, in Approximate Value.) 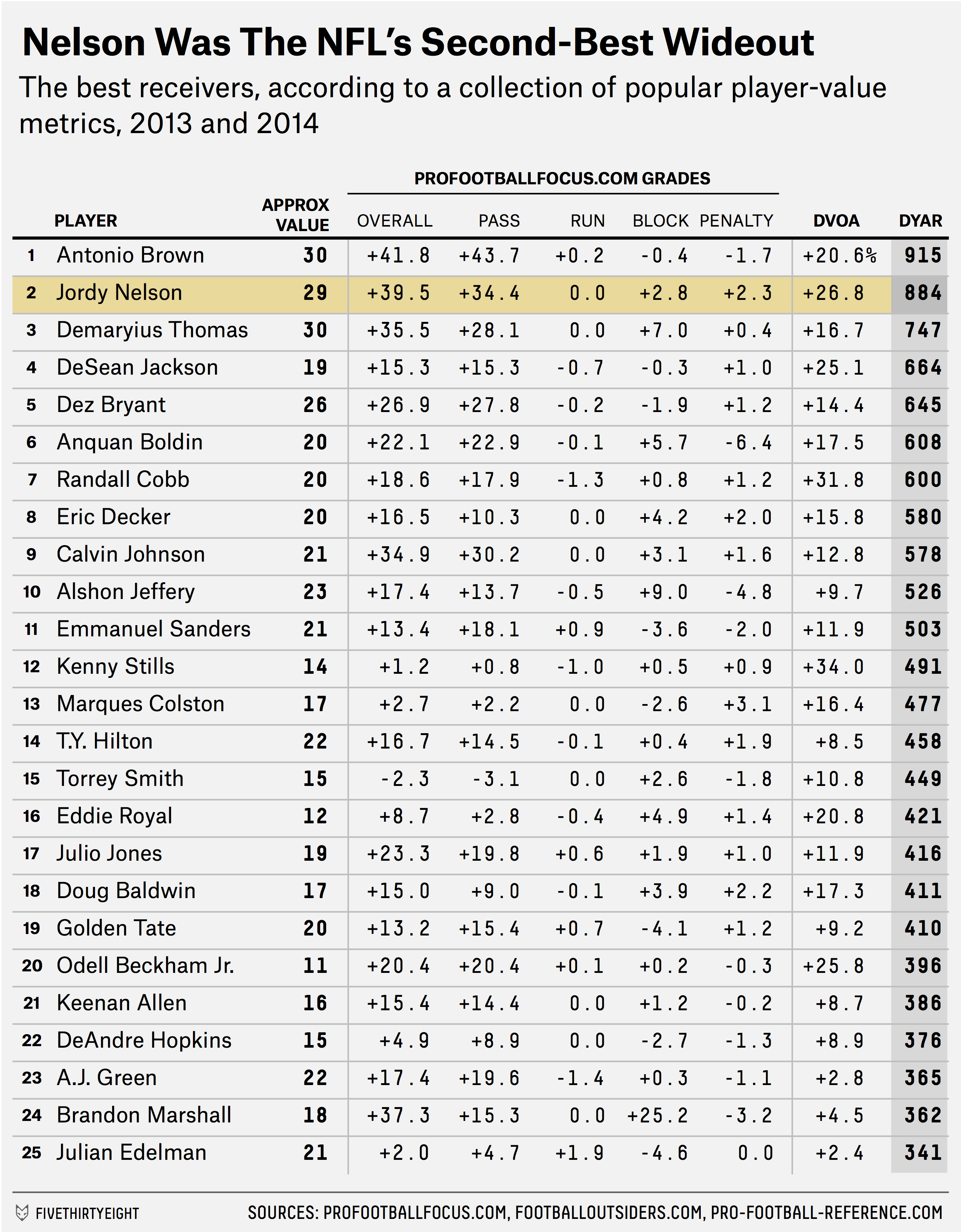 That Nelson would emerge as a receiving superstar these past few years was somewhat of a surprise. Although he was drafted in the second round, Nelson produced modest numbers over his first three years in the league, and his monster 2011 campaign (1,263 receiving yards and 15 touchdowns) stood out so much among his first five NFL seasons that he once seemed a candidate for the biggest one-year wonders ever. It’s a testament to Nelson’s perseverance that he rebounded from an injury-plagued 2012, and he’ll have to call on that resolve again when rehabbing his torn ACL.

But it will also be interesting to see how much worse Green Bay’s offense is without Nelson. Even in his absence, the Packers retain a great deal of talent on offense — not the least of which is Rodgers, the NFL’s most-efficient passer over the past two seasons. Granted, that passing efficiency was compiled, in part, while throwing to Nelson, which exemplifies the frustrating entanglement between QB and WR stats. But few receivers in NFL history have consistently shown the ability to significantly elevate their QBs’ efficiency metrics, which suggests that the Packers’ passing success was due more to Rodgers than Nelson. And that implies that the Packer offense won’t fall apart without Nelson, even though his individual receiving stats were as good as just about anybody’s.

As a sample of one team in one season, Green Bay’s performance won’t offer any definitive conclusions about WR value, but it may provide evidence of just how much impact an elite statistical receiver can have.