Vice President Joe Biden is “increasingly leaning toward entering the race” for president, according to a report from The Wall Street Journal. The disclaimer: He will do so only if “he can knit together a competitive campaign at this late date.”

That’s a big “if,” but the details are sort of beside the point. History suggests that it will be difficult for Biden to mount a successful campaign if he enters the race this late. Of course, the Biden people know that and are apparently not quite ready to make a decision. Maybe they want to see if Hillary Clinton’s stumbles worsen. The solution: Stall. Put one foot in the race. Get the media talking about your running. Meet with big-time Democrats to generate buzz, and plan future get-togethers. Provide lots of tea leaves for the press to inspect.

This half-campaign helps Biden keep his options open, building on some other advantages he has as a potential late entrant. He would enter the race with near-universal name recognition; in addition to being the sitting vice president, he’s been on a winning national ticket twice in the past eight years. Biden also has run for president twice in his own right, so he’s no stranger to Iowa and New Hampshire voters, or to the stresses and demands of a presidential campaign. He also has a connection to a nationwide donor network.

Still, no candidate in the modern primary era has won a nomination after entering as late as Biden would enter. Were Biden to declare in the middle of September, he’d do so just 139 days before the Iowa caucuses. 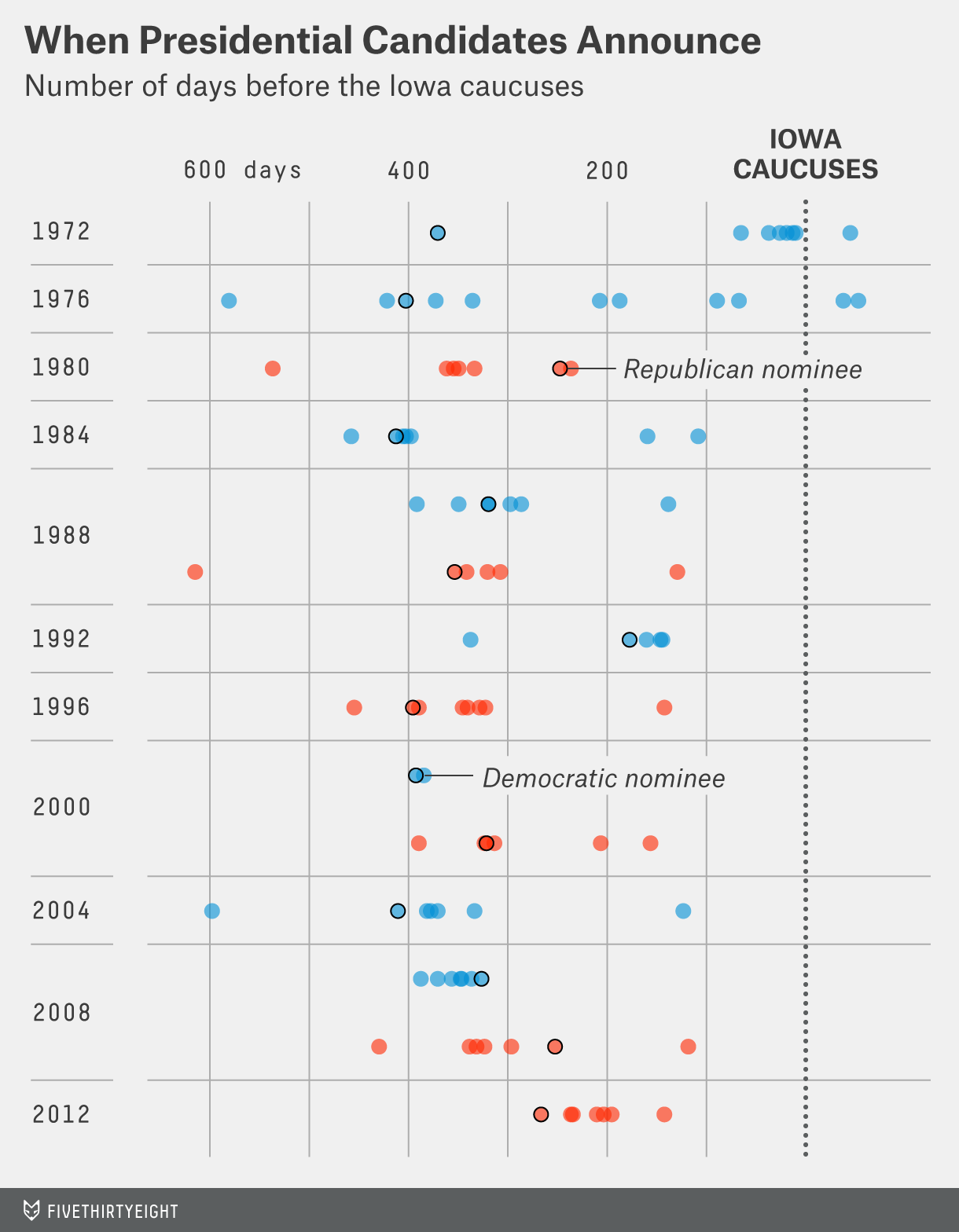 No nominee, besides Bill Clinton when he ran in the 1992 cycle, filed with the Federal Elections Commission (FEC) or formally declared their candidacy fewer than 248 days before the Iowa caucuses. And that 1992 primary was uniquely late in developing; most of the Democratic candidates jumped into the race after Clinton. President George H.W. Bush had high job approval ratings for most of 1991, and many Democrats didn’t think it was worth their time to get into a hopeless race. By contrast, most Democrats now in the 2016 race officially entered by the start of summer.

There’s a reason winning candidates tend to enter the race long before Iowa. Early entrants have more time to raise money and build an organization. Candidates also are likely to stumble at some point (see President Obama’s subpar debate performances in early 2007). That’s true even if they’ve run before (see Hillary Clinton and emails). It’s better for those bumps to occur early, before more people are paying attention.

Indeed, we’ve seen plenty of candidates enter late to great acclaim only to fall flat on their faces. Democrat Wesley Clark in September 2003, Republican Fred Thompson in September 2007 and Republican Rick Perry in August 2011 all, for example, formally declared amid deeply unsettled primaries. They all led or were tied in national polling upon entering the race. Yet each ran into problems and finished with a whimper.

Below are the 10 candidates who entered the latest relative to the median entrance date for serious candidates in a given election cycle. (If Biden enters the race in mid-September, he will have declared 109 days after the median candidate this cycle. That would make him the 15th-latest entrant relative to the field in modern primary history.1)

The Rev. Jesse Jackson, in both 1984 and 1988, was the lone super-late entrant to get more than 15 percent of the vote. And in his 1988 bid, Jackson had already been running during the summer of 1987, despite not declaring or filing with the FEC.2

Biden, of course, hasn’t been openly running or exposing himself to crowds of voters or the press. And he has a number of weaknesses that are likely to come out on the campaign trail. He has a tendency to put his foot in his mouth, and his record is slightly less liberal than Clinton’s. Biden, for example, has credited himself with the passing of the “tough on crime” 1994 Violent Crime Control and Law Enforcement Act, which will almost certainly hurt him with Democratic primary voters focused on criminal justice issues and race — in the same way Martin O’Malley’s record as Baltimore mayor has come back to haunt him.

All that said, the 1992 primary does share one important characteristic with 2016’s: It’s small. Bill Clinton had just five main competitors, the same number Biden would face. Biden would enter the race far, far behind Hillary Clinton according to endorsements and national polling. But he’d likely be in second place and third place, respectively, by those metrics. If Hillary Clinton were to suffer a serious setback, Biden would be in a good position to capitalize.