If you logged on to Business Insider at 8 a.m. today, this is what you saw: 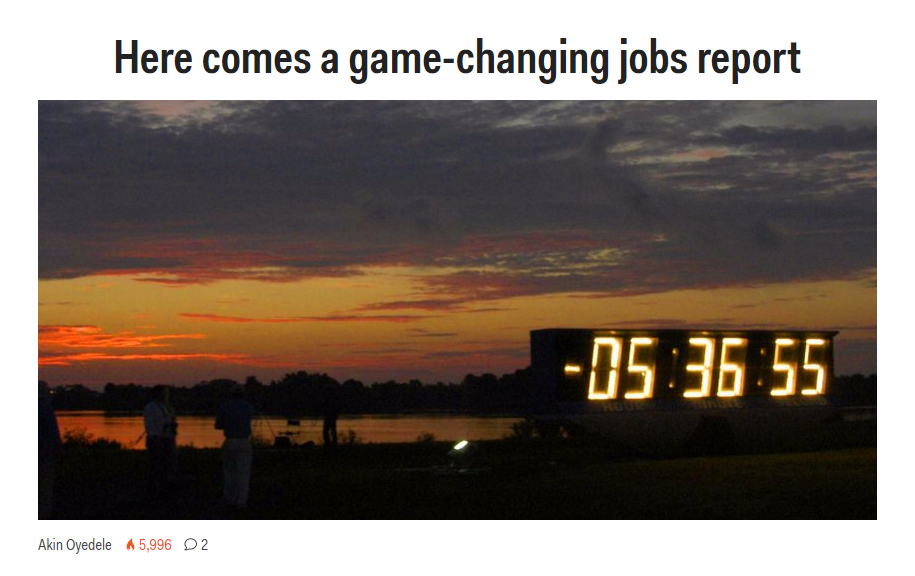 Well, the game-changing jobs report has come, and the game remains decidedly unchanged. (I’m not just picking on Business Insider here. Bloomberg, for example, asked whether this would be the “most important jobs report ever.” The Wall Street Journal and New York Times were only a bit less breathless.)

So why all the hype? The Fed. This was the last jobs report before the Federal Reserve’s policymaking Open Markets Committee meets later this month to decide whether to raise interest rates for the first time since June 2006. It’s likely to be a close call. Until about a month ago, many experts expected the Fed to raise rates amid signs of steady improvement in the economy. But recent turmoil in global financial markets, combined with signs of a severe economic slowdown in China, has complicated the picture. Many Fed watchers saw Friday’s jobs report as a potential tiebreaker.

Theoretically, they may have been right. If the Fed’s decision really is as close as the experts say, then a singularly positive or negative report might have made a difference. But in the real world, the notion of a “game-changing jobs report” is a bit silly. The monthly jobs numbers are based on surveys and have large margins of error. Fed policymakers know enough not to overreact to one report, no matter how good or bad.

We’d all be wise to follow their example. The monthly jobs figures are important — they’re the one economic indicator we regularly cover — but it’s important to keep them in perspective. Here, then, are a few things we do know about the state of the U.S. job market. They may not be game-changers, but at least we can be reasonably sure they’re true.

The job market is getting better: After 59 straight months of job gains, this shouldn’t be a controversial statement. But at a time when Donald Trump is claiming the “real” unemployment rate is 42 percent, it’s worth saying anyway. The unemployment rate is the lowest it has been since April 2008. Broader measures of underemployment are improving as well. And job growth has been impressive: The U.S. is adding jobs at a pace of about 3 million per year. (But while job growth is continuing, it is no longer accelerating.) 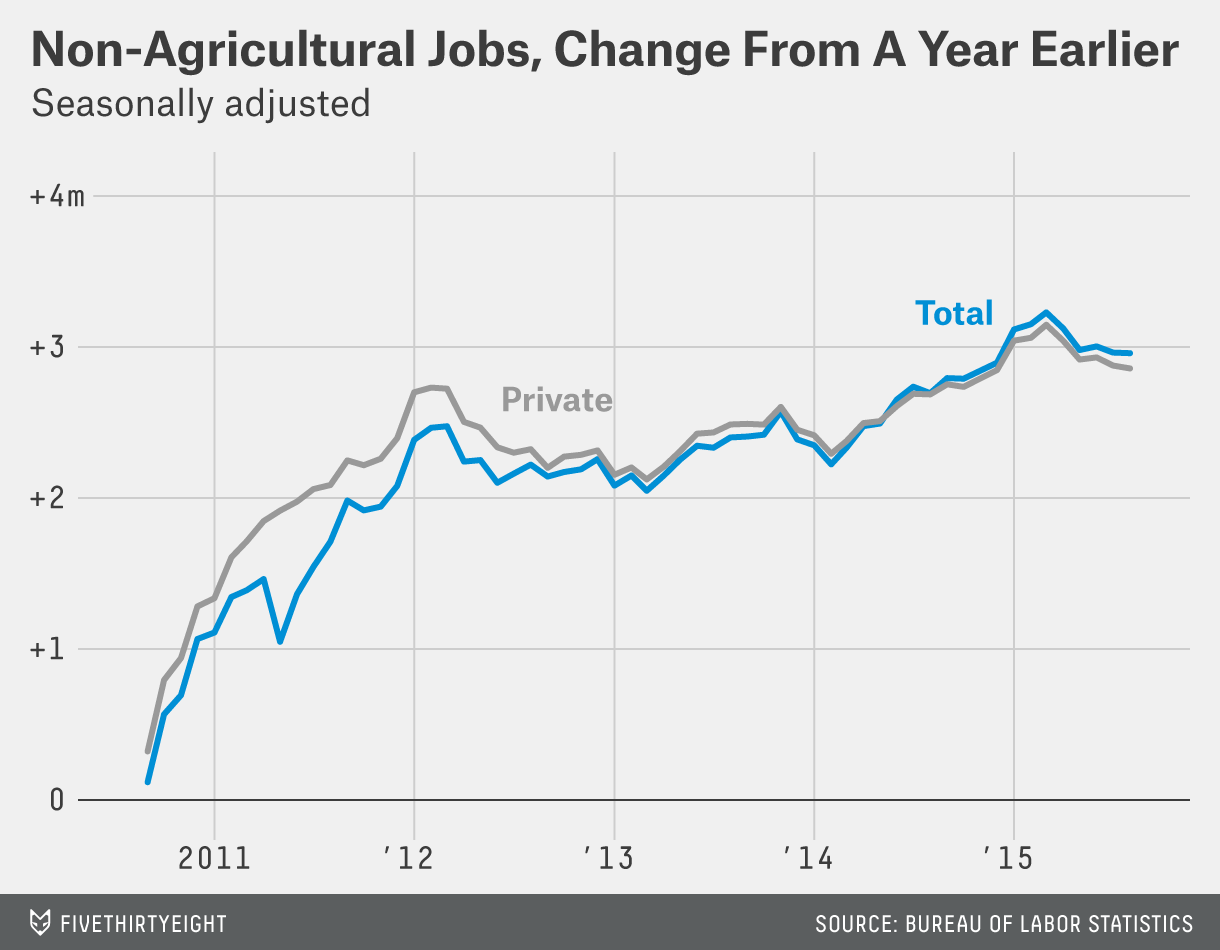 The unemployed are doing better, too: Regular readers know that the government only counts people as unemployed if they’re actively looking for work. That means the unemployment rate can fall for good reasons (people find jobs) or bad ones (people stop looking). Lately, the decline in the unemployment rate has been mostly for good reasons. One in four job-seekers found work last month, the highest job-finding rate of the recovery. And while the month-to-month figures are volatile, the trend has been steadily positive. For much of the recovery, unemployed workers were far more likely to stop looking than to find work; that’s no longer true. 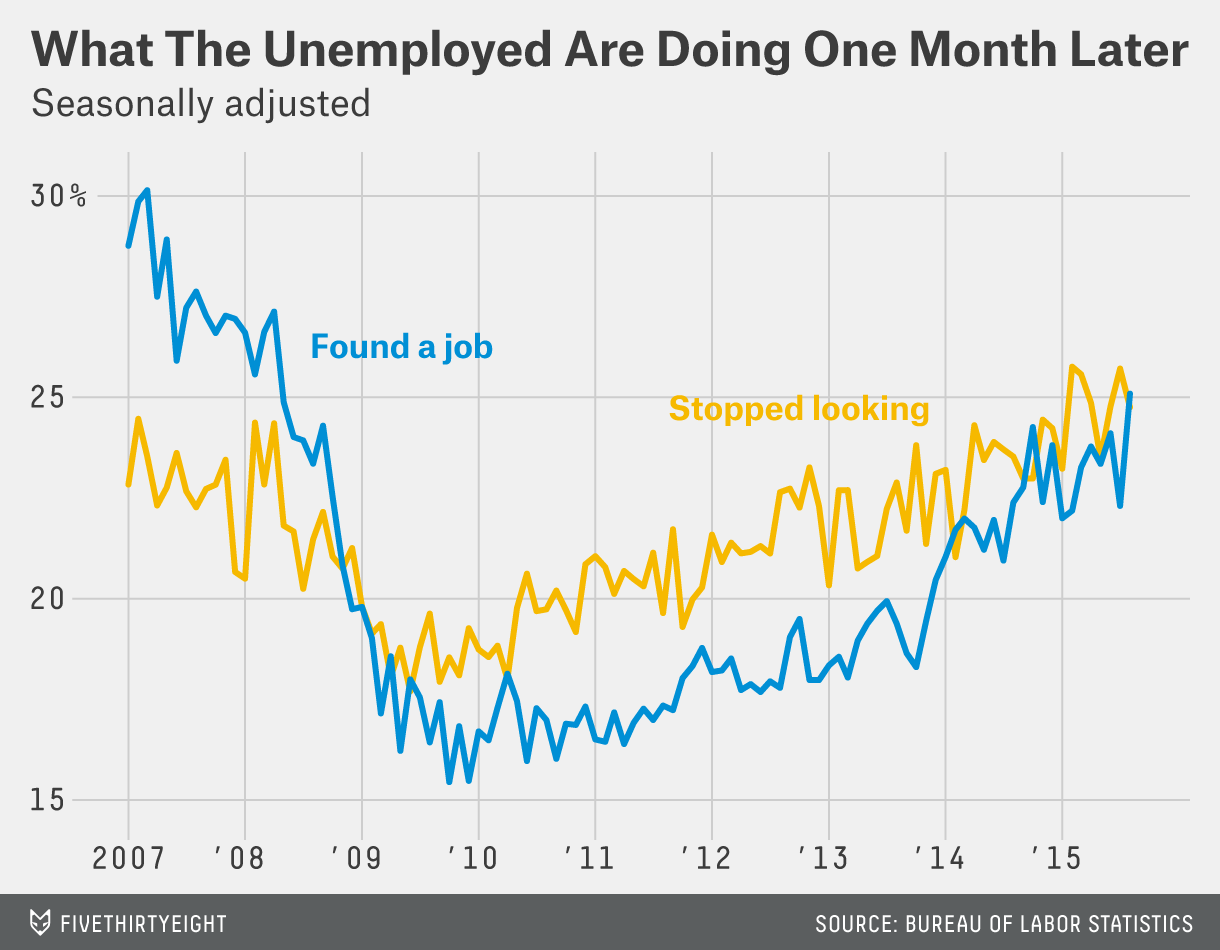 Things are also getting better for the long-term jobless. About 2.2 million Americans have been out of work for more than six months, down nearly 800,000 over the past year. The typical job-seeker has been out of work for 11 weeks, down from a peak of nearly 26 weeks during the recession.

Wages are rising, but slowly: You may have heard recently that wages are “stagnant.” That isn’t quite true. According to Friday’s report, average hourly earnings in August were 2.2 percent higher than a year earlier; other measures give slightly different numbers, but they all tell a story of wage growth around 2 percent per year, which is faster than the rate of inflation. 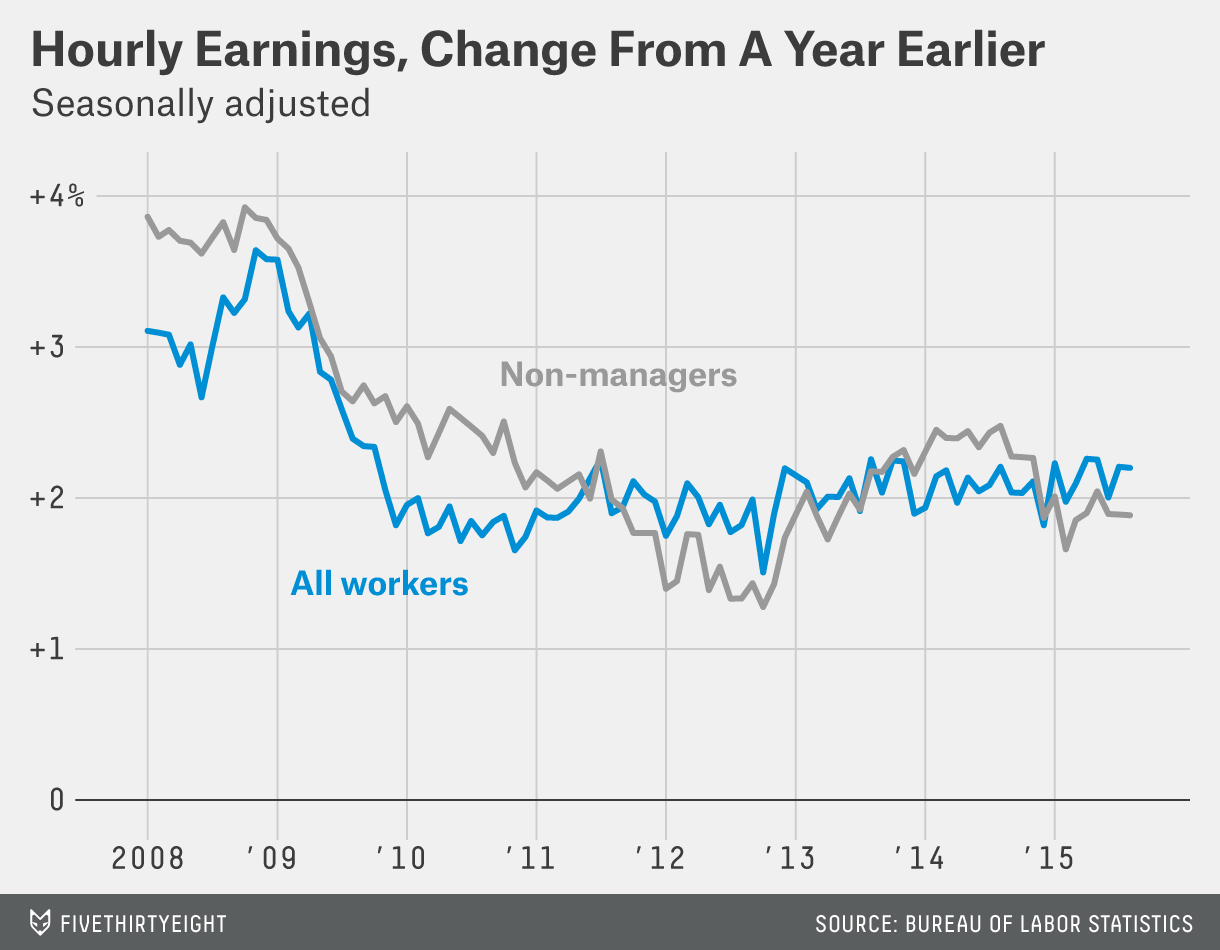 Still, a 2 percent raise isn’t much, and, more importantly, there’s no sign that wage growth is picking up speed. That suggests there’s still room for the job market to improve further. After all, if this were truly as good as the economy could get, then companies would be having trouble finding workers — and would be offering more money to attract or retain them.

More people are working full time: Jeb Bush wants Americans to work more hours — and they are. The number of people working part time because they couldn’t find full-time work ticked up in August, to 6.5 million, but that’s still 740,000 fewer people than a year earlier. Virtually all the employment growth during the recovery has been full time, and, at long last, the U.S. has as many full-time workers as when the recession began nearly eight years ago. 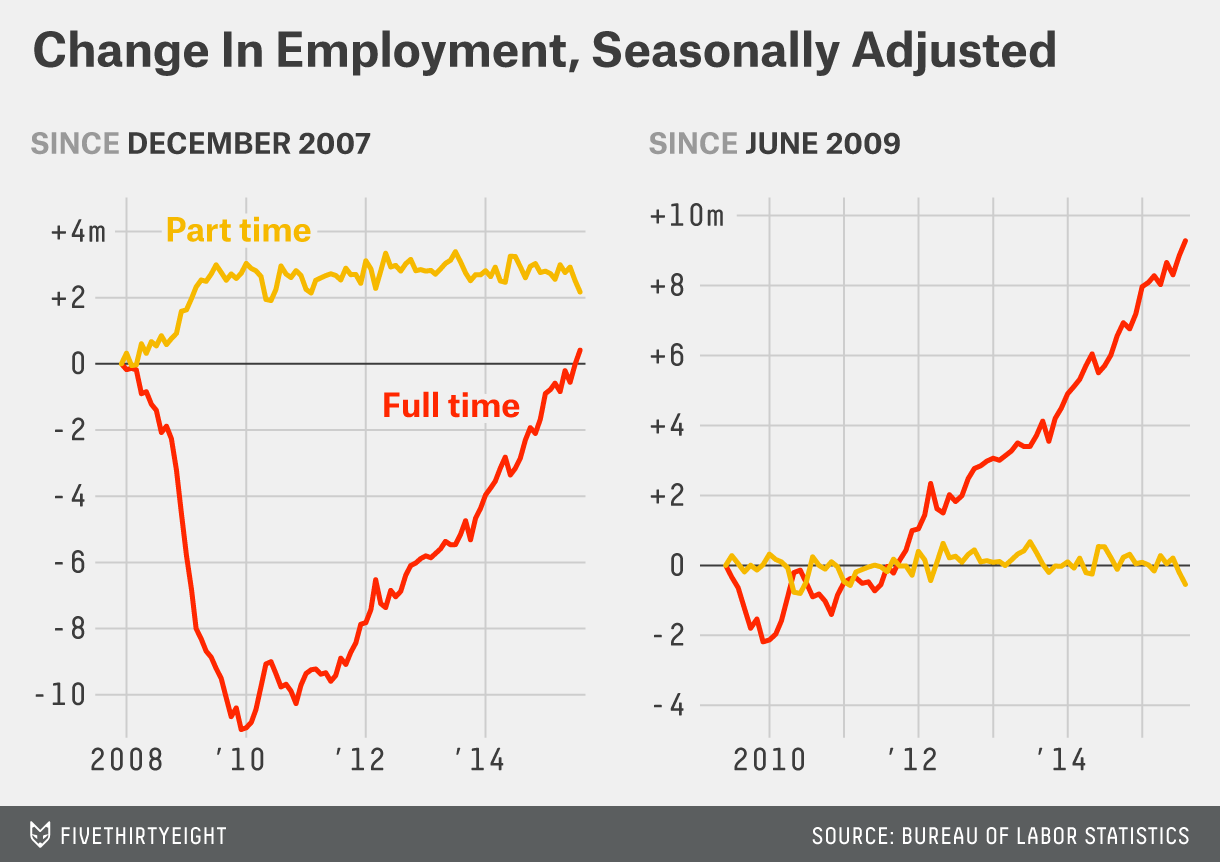 The decline in the so-called employment-to-population ratio reflects more than a weak economy. Much of it is due to the retirement of the baby-boom generation. A smaller part is due to increased college enrollment, which has pushed down employment among young people. But even workers in the prime of their working lives — those ages 25 to 54 — are less likely to be working now than before the recession. Moreover, the employment-to-population ratio for these prime-age workers stopped rising this year. 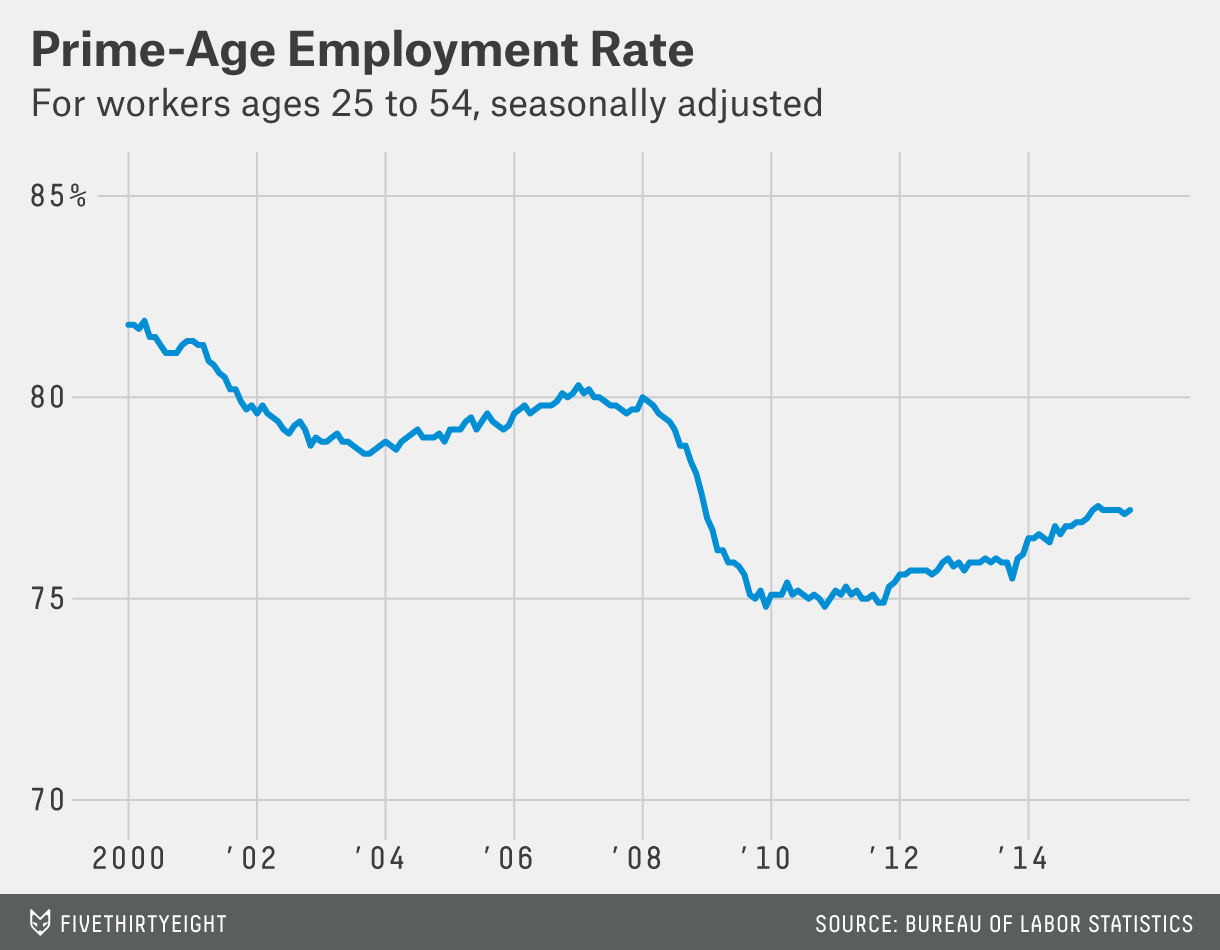 Like weak wage growth, the low employment-to-population ratio could suggest that there’s more room for the economy to improve. After all, there are lots of adults out there who don’t technically count as “unemployed” but might be tempted to come back to work if the right opportunity were available.

But the long-run nature of the decline in employment rates, combined with the recent lack of improvement, suggests that many people won’t return to work even if the economy gets better. That, more than any one jobs report or even one Fed meeting, would be a true game-changer.