Whenever a new set of jobs numbers is announced, it is important to keep in mind just how noisy the data can be.

Forecasts of the monthly growth in nonfarm payrolls miss by 68,000 jobs on average. That means that the margin of error on the forecasts, enough to cover 95 percent of all possible outcomes, is wider still: plus or minus about 170,000 jobs.

This is not merely because economic forecasting is difficult. It is also because the economy is a hard thing to measure, and the initial estimates of jobs growth are crude. On average, the initial monthly jobs numbers are eventually revised upward or downward by 70,000 jobs.

Nor do the monthly revisions necessarily cancel out. Instead, whole seasons, and indeed whole years, can sometimes be revised. 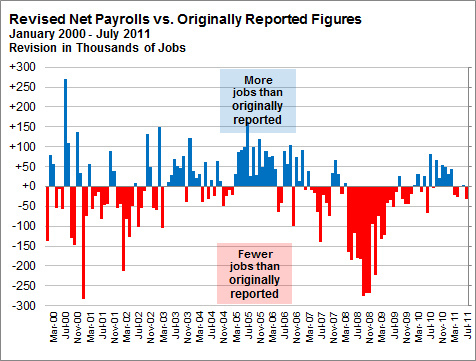 Last month, for instance, the government estimated that 386,000 more jobs than it had originally reported were created between April 2011 and March 2012, or about 32,000 per month. These estimates will be refined and officially incorporated into the numbers, when the government announces its benchmark revisions to the labor numbers on Feb. 1, 2013.

Thus, the threshold for what counts as an economically and politically significant jobs report ought to be fairly high. Not every month’s report can or should be a “game-changer.” Indeed, the public has often reacted more calmly to both good and bad monthly jobs reports than the political cognoscenti do.

Was Friday’s jobs report, which showed 114,000 jobs added in September and the unemployment rate dropping to 7.8 percent, strong enough to be one of the exceptional cases?

My view is that the answer is yes: this report really does warrant some attention.

The reported payrolls growth figure for September, 114,000 jobs, was incredibly close to consensus forecasts of about 115,000 jobs added. But everything else about the report considerably beat expectations. Jobs figures were revised upward by 40,000 in July, and by 46,000 in August. Combined with the jobs growth in September, that means the economy added 200,000 more jobs than we thought previously.

The unemployment rate is calculated through a separate survey — one of households rather than business establishments. The data from the household survey tends to be even noisier than that from the establishment survey.

If the September numbers resulted in part from statistical variance, it is certainly possible that there will be some payback in the October report, which will be released the Friday before the Nov. 6 election.

But it is also possible that the strength shown in the government’s report on Friday reflects it playing catch up. The firm ADP, which tracks private-sector payrolls, had reported that an average of 170,000 private-sector jobs had been created each month so far this year. The ADP reports are much maligned because they do not always match the government’s payroll figures over the short run. But in the long run, the numbers tend to converge.

Furthermore, there has been a fairly consistent pattern of upward revisions to the government’s jobs reports recently.

The jobs numbers are certainly not enough to change the basic story of a slow economic recovery, and it will take many years for the economy to get back to full employment.

However, the jobs numbers are one of the more hopeful signs for the economy on balance. An average of 146,000 jobs have been created per month over the past year, or closer to 157,000 with the government’s anticipated benchmark revisions accounted for.

Those aren’t great numbers by any means, and would translate to an annualized growth rate of 1.4 percent. But over the past 25 years, payroll jobs have grown at an annualized rate of 1.1 percent, or the equivalent of about 125,000 jobs added per month given today’s population. By this measure, it’s been a fairly average economic year, although certainly not enough to make up for the productivity that was lost from the economy in 2008 and 2009.

The rate of jobs growth is now just slightly behind the one that was enough to re-elect George W. Bush in 2004, when an average of 168,000 jobs were created between January and September 2004.

Although the unemployment rate remains stubbornly high, the recent trajectory now looks more favorable. Unemployment has fallen by 0.7 percent since December 2011, to 7.8 percent from 8.5 percent.

Historically, there has been no relationship at all between the unemployment rate on Election Day and the incumbent’s performance.

However, there has been a relationship between the change in the unemployment rate in the months leading up to the election and how well the incumbent does. The decline in unemployment under Mr. Obama this year since December is the largest in an election year since Ronald Reagan’s re-election bid, when it declined to 7.3 percent in Sept. 1984 from 8.3 percent in Dec. 1983. 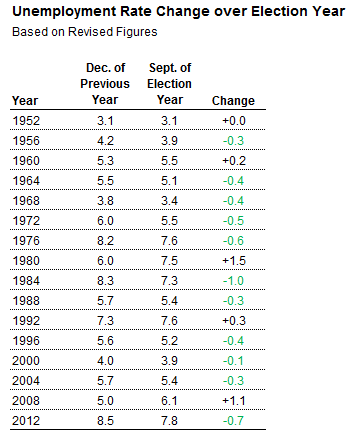 However, the FiveThirtyEight economic index, which accounts for the payrolls numbers along with six other economic data series, would project a narrow re-election for Mr. Obama by about 3 percentage points — similar to Mr. Bush’s margin over John Kerry in 2004. Especially with the Friday jobs report, the economic numbers now seem just strong enough to make the incumbent a favorite for re-election, based on the way the public has evaluated their presidents historically.

I’m less inclined to predict what immediate effect the numbers will have on the polls — whether Friday’s news outweighs, for instance, Mr. Obama’s poor performance in Wednesday night’s debate. Mr. Obama did not win the election on Friday any more than he lost it on Wednesday.

But for the first time in a long while, Mr. Obama
should be happy if the discussion turns toward the economy.