Jim Webb decided to announce his presidential campaign on Thursday, the getaway day before a major federal holiday, which greatly limits press coverage of his entrance into the race. That alone hints at the lack of seriousness in his candidacy. But in case you needed another reason to understand why Webb has little shot at the nomination, here’s one: he’s a dying breed in the Democratic Party, where power is increasingly tilted toward liberals and especially nonwhite voters.

Webb, who served as secretary of the Navy in the Reagan administration and later as a Democratic senator from Virginia, is one of the last of the moderate Democrats.1 His public statements and voting record in the Senate were quite centrist,2 and he even went so far as to defend the Confederate flag after the recent massacre of nine black people at a church in Charleston, South Carolina.

Webb’s record appears to be considerably to the right of either of the two most recent Democratic presidential nominees, John Kerry and Barack Obama, not to mention either of the two top Democrats running for the 2016 nomination, Hillary Clinton and Bernie Sanders. For example, he voted against comprehensive immigration reform and in favor of allowing firearms into checked baggage on Amtrak. Both of those positions are verboten in the modern Democratic Party. In fact, Webb looks like a throwback to the Bill Clinton and Al Gore era. (Higher scores in the table below indicate more liberal positions.) 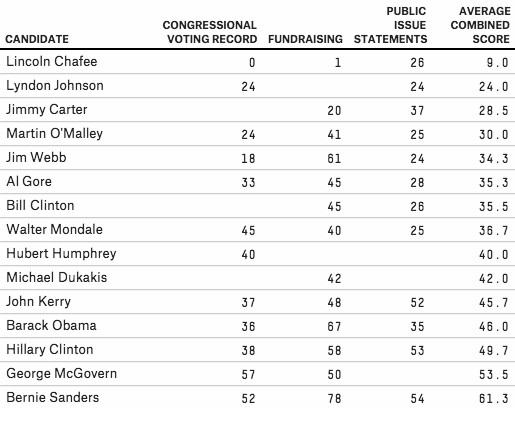 The party’s direction has changed considerably since then. White moderates and conservatives have been shrinking as a percentage of self-identified Democrats, according to the pre-eminent General Social Survey. After Gore’s run in 2000, they have made up less than a plurality of all Democrats. You simply cannot win a Democratic nomination by relying on only moderate and conservative white Democrats. 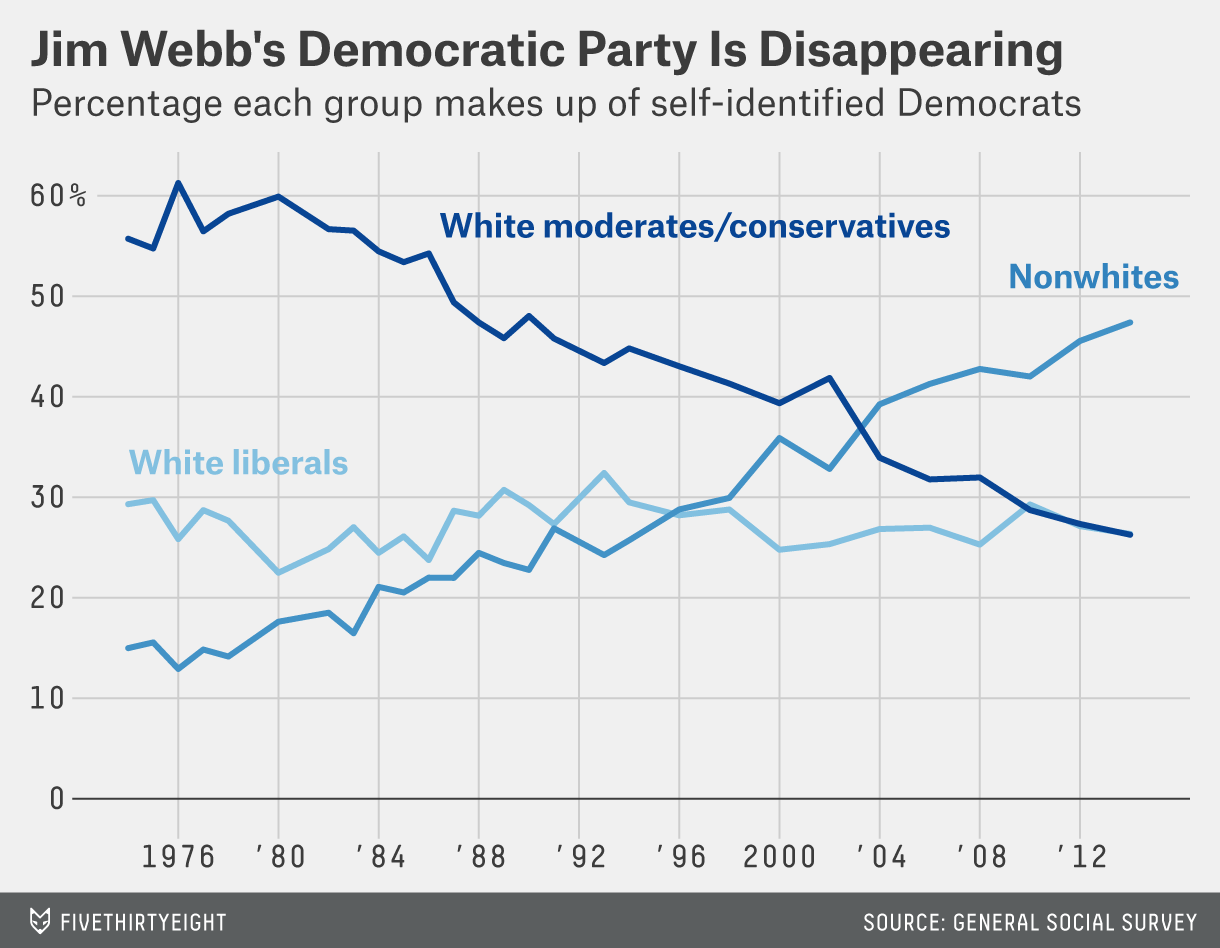 Indeed, Sanders’s base of white liberals has become a larger percentage of white Democrats amid the decline of moderates. Last year was only the second time in the past 40 years in which they made up a larger share of the Democratic base than white moderates/conservatives. This explains a lot of the enthusiasm for Sanders in states such as Iowa and New Hampshire, where whites make up more than 90 percent of the Democratic base.

It’s Clinton, however, who is best positioned to take advantage of the recent demographic shift in the Democratic Party. Clinton has picked up well over 60 percent of the vote among nonwhite Democrats in recent polls from CNN/ORC and Fox News. Sanders has languished in single digits among nonwhite voters. That’s very good news for Clinton given that nonwhites now make up nearly a majority of the party.

Indeed, nonwhite, specifically black, voters were the key to Obama’s primary victory in 2008. He was able to combine them with liberal whites to overcome Clinton’s initial lead. Unless someone like Sanders can increase his appeal to nonwhite voters, or Webb is able to combine moderate/conservative whites with nonwhite voters, Clinton is likely to march to the nomination, just as Obama did.

Check our our live coverage of the first Democratic Debate.