The Federal Reserve has two policy goals: maximum employment and stable prices. For the past several years, the first part of that dual mandate has gotten most of the attention. That’s starting to change.

To understand why, look at Friday’s jobs report. As we said, it showed solid growth. What’s more, that growth has held generally steady over the past two years, even as other measures of the economy have been more volatile. There’s still uncertainty in the job market — What will happen to the long-term unemployed? How many of the “missing workers” will return to the labor force? Are we creating enough good-quality jobs? — but there’s little question about the big picture. The job market is steadily improving. 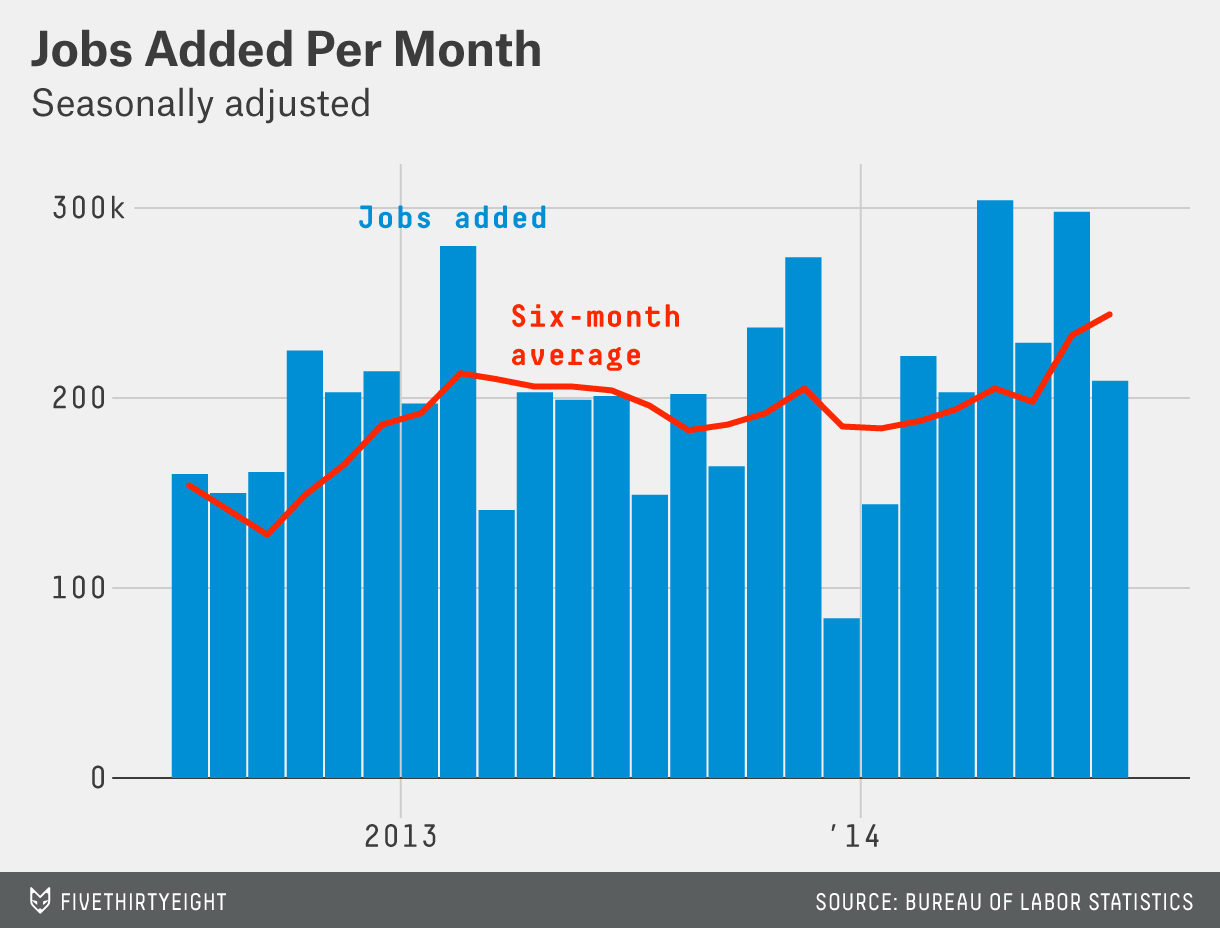 Prices are a different story. For most of the past six years, inflation has been a nonissue for pretty much all mainstream economists, running well below the Fed’s target of 2 percent annual price growth. But in recent months, there have been hints of an uptick. The evidence is murky, with different indicators telling conflicting stories. But it’s strong enough that the Fed’s attention is shifting back toward the inflation side of its mandate.

The two issues aren’t independent of each other. In theory, inflation and unemployment should have an inverse relationship. When unemployment is high, employers feel little pressure to raise wages — workers don’t have much bargaining power when there are lots of job seekers in the wings — and therefore have little need to raise prices. When unemployment is low, companies have to raise pay to attract or retain workers, and prices tend to rise.

In practice, the relationship is much less clear. There have been periods in which both unemployment and inflation were high (the “stagflation” of the 1970s) and periods of low unemployment and moderate inflation (such as the strong job market of the late 1990s). Still, all else equal, as the job market returns to health, we would expect prices to start to rise more quickly.

The question for Fed policymakers is when. In recent years, the Fed has taken extraordinary measures to juice the economy, buying trillions of dollars in bonds in an effort to hold down long-term interest rates. It’s winding down that process now and will eventually begin to raise interest rates. The timing for that second step will be determined largely by policymakers’ judgment of when inflation will begin to rise. Start too soon, and the Fed risks smothering its carefully cultivated recovery; act too late, and it could lose control of prices.

In evaluating the “when” question, Fed economists will look at a range of evidence, including direct measures of consumer prices: the consumer price index, compiled by the Bureau of Labor Statistics, and the Bureau of Economic Analysis’s price index for personal consumption expenditures (PCE), which is the Fed’s preferred measure. Both tell the same basic story: Inflation has ticked up in recent months, but it remains below the Fed’s long-run 2 percent target. Data released Friday, for example, showed the PCE index rising 1.6 percent in June from a year earlier. “Core” inflation, which excludes volatile food and energy prices, was 1.5 percent. (The independent Billion Prices Project, which doesn’t rely on government data, finds a similar trend.) 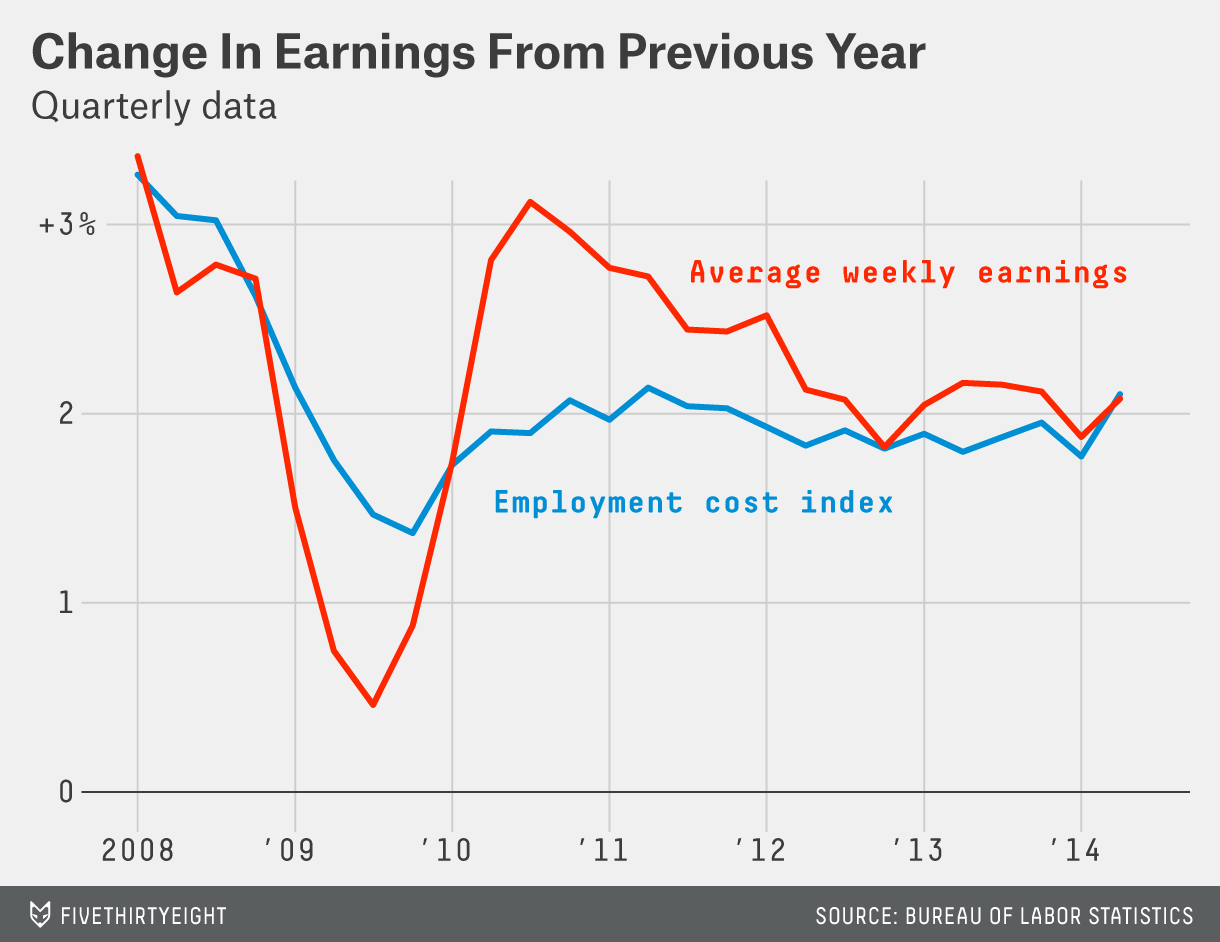 Another way to measure inflation is to look at wages, rather than prices. Here, the story is a bit less clear. Data released Thursday showed compensation costs, which include wages and benefits, rising more quickly in the second quarter. But data in Friday’s jobs report showed average hourly and weekly earnings rising more slowly in June. Looking past short-term volatility, however, both paint a similar picture of wage growth that is modest but may have shown some recent signs of acceleration. 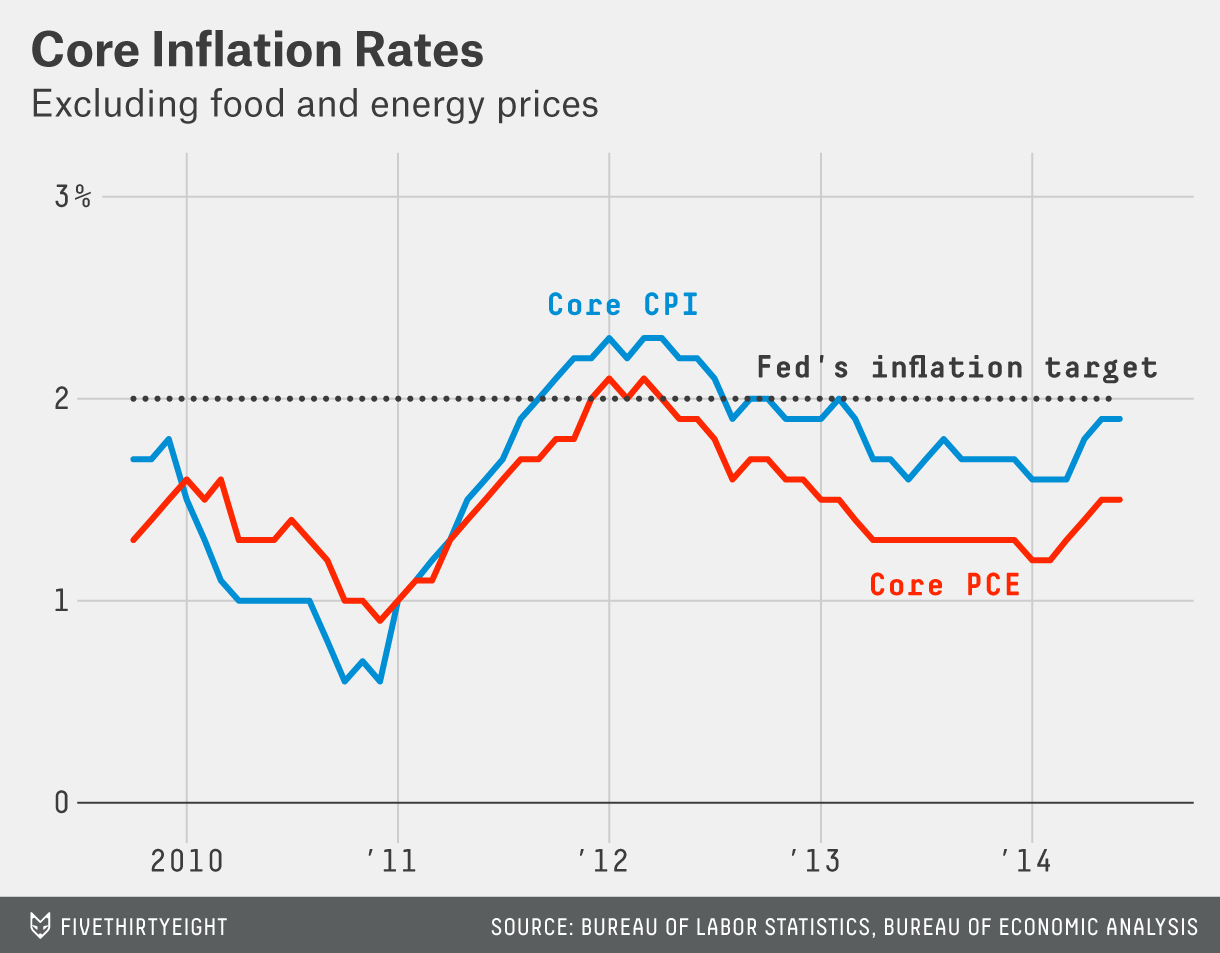 Ultimately, however, Fed policymakers are less concerned with what prices are doing now and more concerned with what they’ll do in the future. That means they’ll be paying close attention to measures of inflation expectations — that is, how consumers, businesses and investors think prices will change. While several surveys ask individuals and companies about their inflation expectations directly, Fed policymakers prefer measures derived from securities traded on the open market. Investors, after all, are the ones putting money where their mouth is.

The U.S. Treasury issues inflation-protected securities called TIPS, which pay out a real, or inflation-adjusted, return based on the CPI change since the securities were issued. By looking at what investors are willing to pay for that inflation protection, combined with what they pay for regular or “nominal” Treasury securities, we can figure out what they think inflation will look like in the years ahead. The chart below shows the most widely cited measure of investors’ expectations. (For wonks out there, this is the five-year/five-year forward “break-even inflation rate” derived from the TIPS market. Everyone else, just think of this as what investors expect the rate of inflation to be in a decade.) 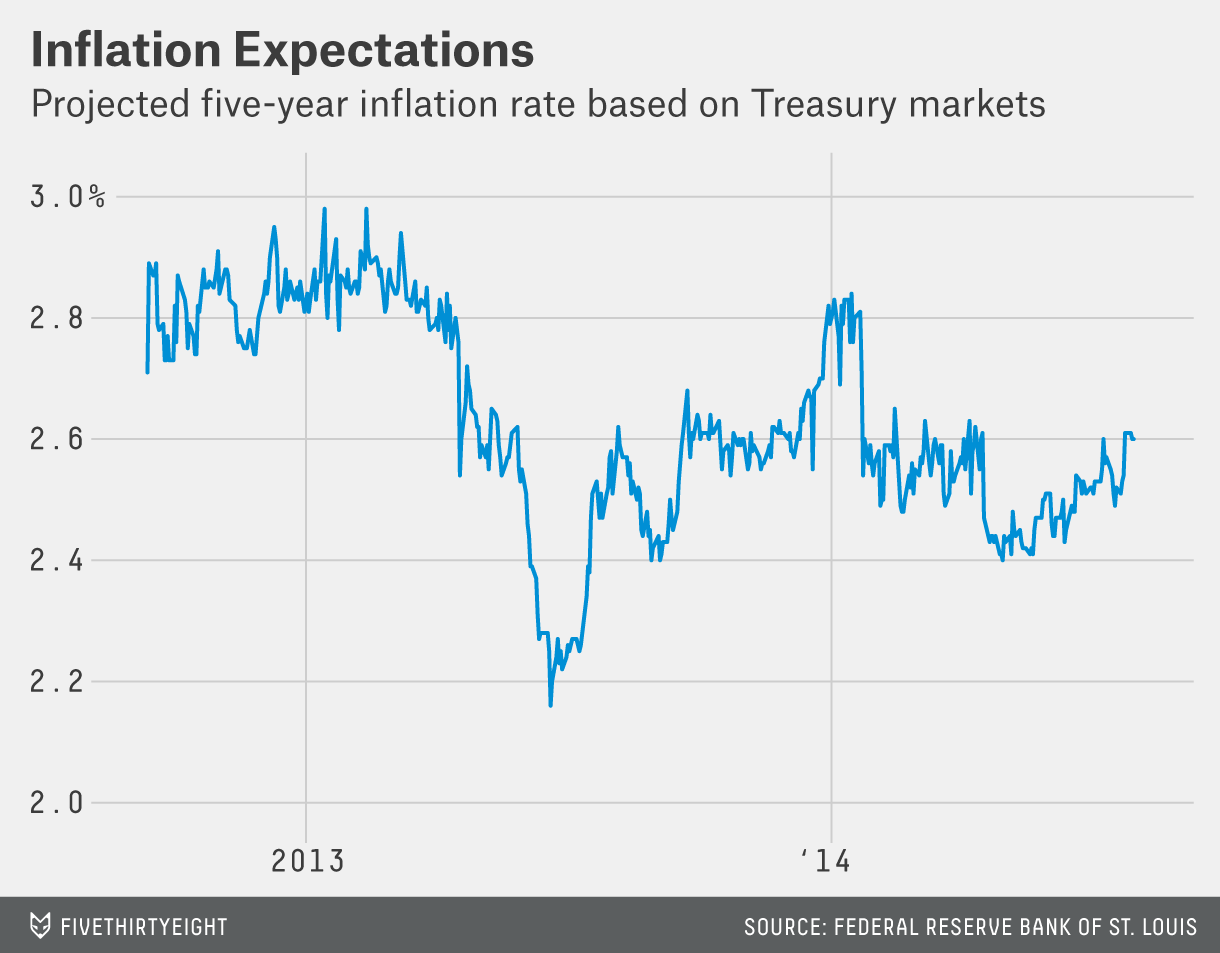 As the chart shows, inflation expectations are lower now than they were when the Fed began its latest round of bond buying in September 2012. Yes, expected inflation has ticked up two-tenths since April, but it is down two-tenths from the start of the year. Investors expect CPI to run at about 2.6 percent in the five-year span beginning in 2019. Because CPI tends to run a quarter- to half-percentage point above the Fed’s preferred inflation measure, that’s equivalent to inflation that’s just a hair above the Fed’s long-run target.

Put all this together, and the Fed sees unemployment that’s still above normal, inflation that’s below its target, and inflation expectations that are steady (or “well-anchored” in Fed parlance). Hence the Fed’s statement last week that it expects to keep interest rates near zero for “a considerable time after the asset purchase program ends,” probably in October (and to keep them low “for some time” after that).

But there is another way to look at the data. Unemployment is falling fast. Inflation has risen since the start of the year and expectations, too, have risen in recent months. That’s the view taken by Philadelphia Fed President Charles Plosser, who dissented from the Fed’s vote last week on the grounds that the Fed’s plan to keep rates low well into next year “does not reflect the considerable economic progress that has been made toward the Committee’s goals.”

Plosser didn’t convince any of his fellow members of the Fed’s policymaking Open Market Committee that higher prices are around the corner. But his colleagues will be watching inflation measures closely for any sign that he’s right.