This has been a week of important milestones in the coronavirus crisis, but not in a good way. On Tuesday, the number of Americans who have tested positive for COVID-19 passed 1 million, and on Wednesday, deaths attributed to the disease — which are probably underestimated — rose to more than 60,000.1

As the numbers of confirmed cases and deaths continue to grow, we checked back in with a survey of infectious-disease researchers from institutions around the U.S. to help us understand where we might be headed.

For the week ending April 25, 13,788 deaths were attributed to the coronavirus. In this week’s survey, which was conducted on April 27 and 28, a plurality of experts predicted that weekly death totals would not fall below 5,000 until after June 20. The experts also forecast that between 1 million and 1.15 million total confirmed cases of COVID-19 will be reported on May 3.

For some questions in the survey — organized by Thomas McAndrew and Nicholas Reich, both biostatisticians at the University of Massachusetts Amherst — respondents are asked to provide their best estimate, as well as a best-case and worst-case possibility. Structuring the survey in this way lets the organizers generate probabilistic consensus forecasts, a tool that can answer questions about how likely various scenarios are.

Here’s what the experts had to say this week.

How many confirmed cases will be reported by May 3?

The experts have been asked this question in the past, and actual case numbers have fallen within their forecasted ranges. This time, they were given a set of five bins of predefined total confirmed cases and were asked to assign a probability to each. For the week ending May 3, the expert consensus is that between 1.1 and 1.15 million total confirmed cases will be reported by The COVID Tracking Project. 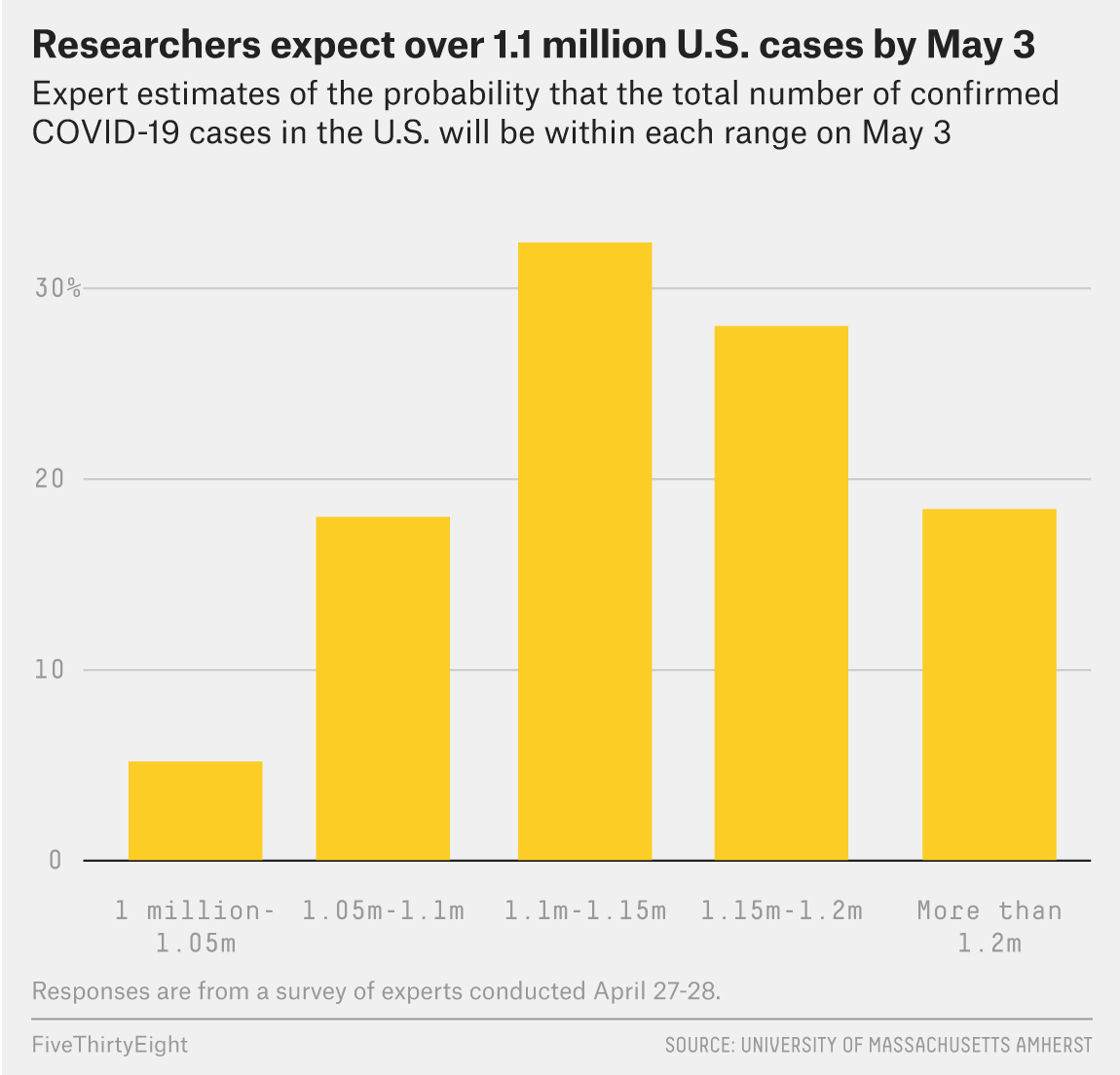 As has been true throughout the crisis, however, there is still a lot of uncertainty surrounding the predicted confirmed case count. The consensus forecast says that the chance (about 18 percent) that confirmed cases will be between 1.05 and 1.1 million is the same as the chance it will be above 1.2 million.

When will new reported deaths per week drop below 5,000?

In the past two weeks, deaths attributed to the coronavirus have hovered above 13,700 (13,708 and 13,788). A drop to 5,000 weekly deaths would represent a decline of 64 percent — a substantial decrease. But experts are pessimistic that such a drop will happen in the near future. The expert consensus gives a nearly 40 percent chance of the U.S. hitting the 5,000-death weekly plateau by June 6 and a probability of just over 60 percent of it occurring some time after then. 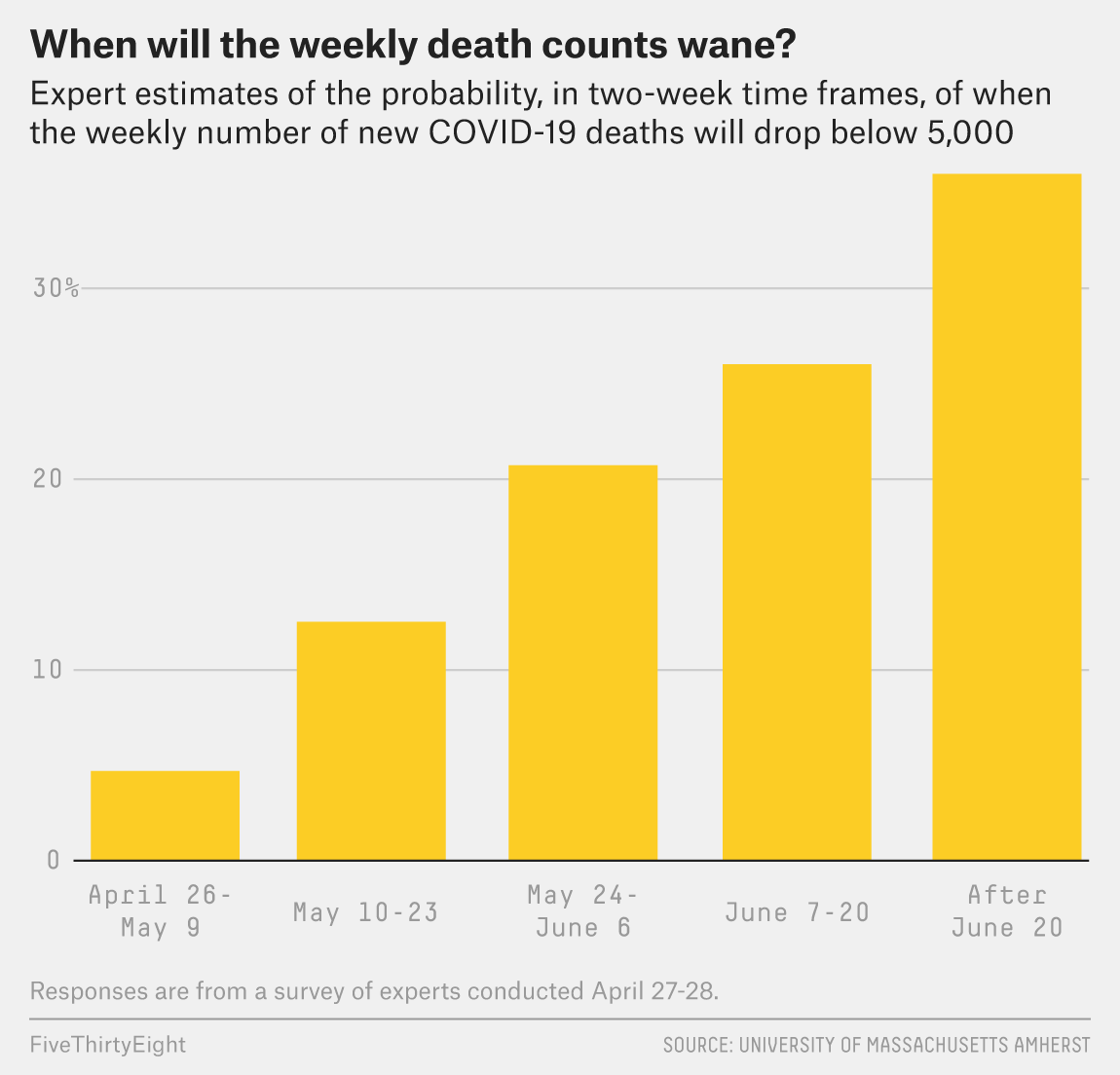 What will happen in Georgia?

On April 23, Georgia partially reopened for business, and stay-at-home restrictions have continued to be lifted across the state. The seven-day moving average for newly confirmed cases in the Peach State stood at just over 700 per day on April 20. Experts were asked to predict the new daily case average for the week ending on May 16 under the current open regime, along with the daily case average had Georgia not relaxed its stay-at-home orders. 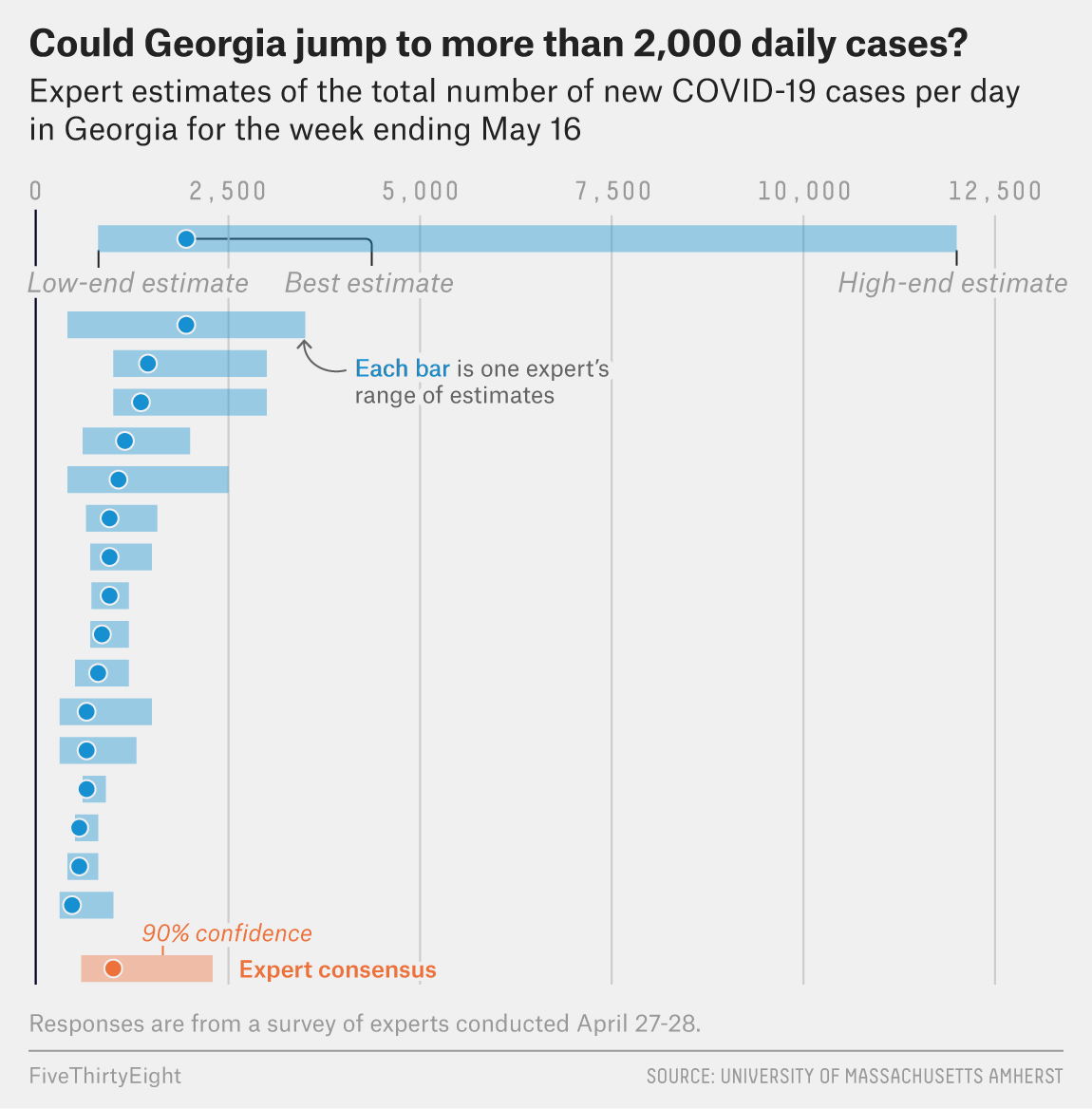 The consensus forecast of 1,044 new confirmed cases per day in two weeks suggests that Georgia will see a substantial worsening of the virus’s spread as a result of reopening. The daily number of new confirmed cases is forecast to be somewhere between 579 and 2,292, with six experts indicating that an increase to 2,000 or more new cases a day is plausible. 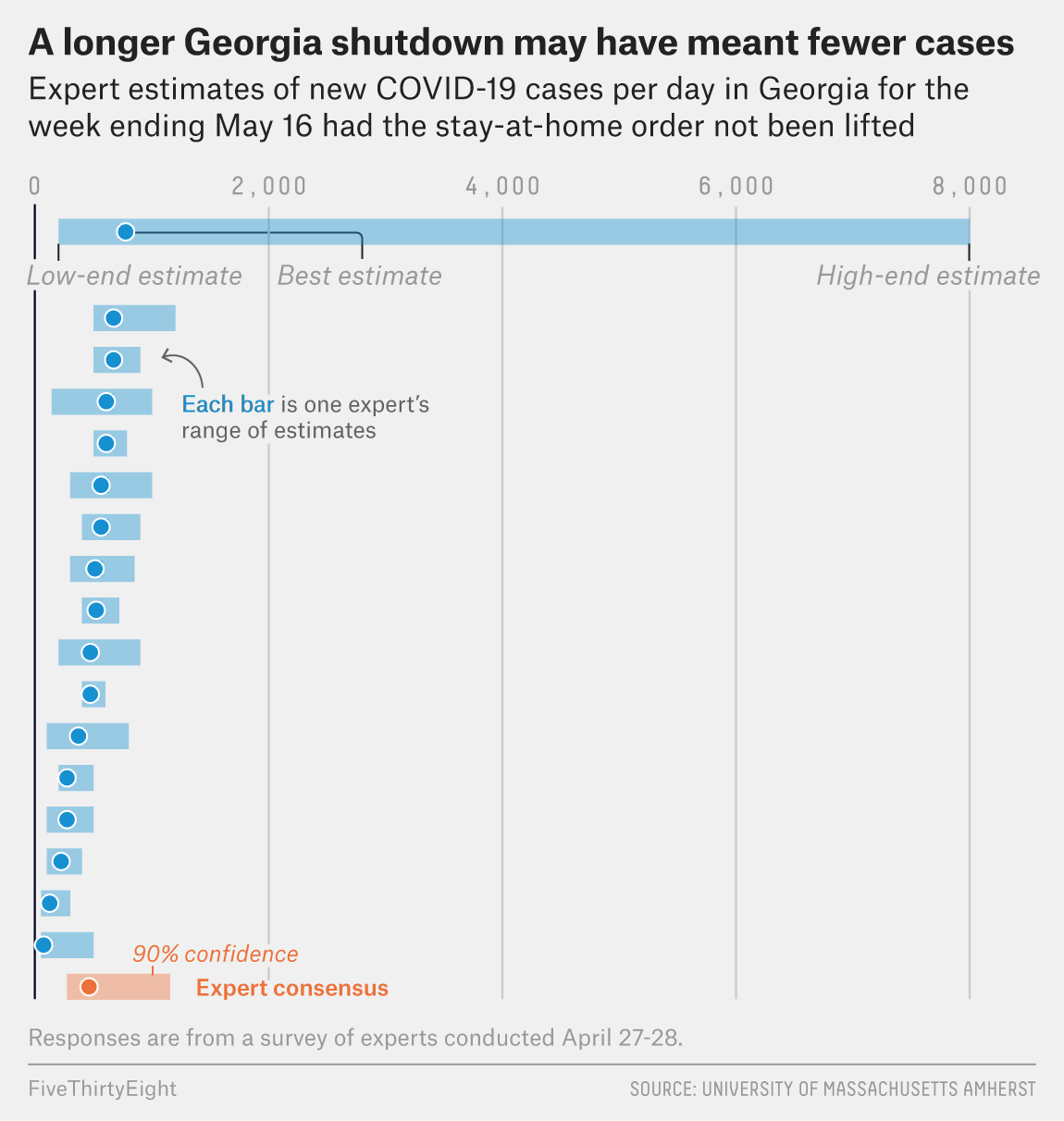 Experts believe that the spread of COVID-19 could have been reduced had Georgia not relaxed its stay-at-home order. Under this scenario, experts predicted that Georgia would have seen only 487 new cases per day for the week ending on May 16, a reduction of more than 50 percent in new daily cases compared with the estimates in the open regime.

There was also less uncertainty among experts in their predictions for Georgia’s new daily cases in the world where Georgia did not relax stay-at-home orders. Experts would have expected between 273 and 1,156 new cases per day, representing a spread half as large as the one for the new-case forecast without the stay-at-home orders.

As Americans slowly prepare to go back to work, the experts’ forecast helps quantify the increased risk Georgia and other states have incurred by beginning to restart their economies in the midst of a still-uncontrolled pandemic.

FiveThirtyEight Politics Podcast: The US is starting to reopen. Is it ready?