Predictions of the coronavirus’s toll on the U.S. continue to fluctuate. Though some states report evidence of a flattening in the curve, others are just beginning to see COVID-19’s devastation. To get a better picture of how the pandemic will play out, we’re following a survey of infectious-disease researchers from institutions across the country. This is our fourth week tracking the survey, which captures experts’ thoughts on the current state of the COVID-19 pandemic, as well as their estimates of its future trajectory and the uncertainty surrounding its future.

This week’s survey, taken on April 6 and 7, shows that experts expect about 660,000 confirmed COVID-19 cases on April 12, indicating that they see the coronavirus spread as likely slowing. However, they think hospitalizations are most likely to peak in May, with a 42 percent chance that they won’t peak until after June 1. The experts also believe that only 13 percent of all infections in the U.S. had been reported on April 5, implying that there could have been up to 20.2 million people currently infected at the time.

For most questions in the survey, respondents are asked to provide their best estimate, as well as a best-case and worst-case possibility. Asking a question in this way lets the survey organizers generate a consensus forecast, which is a tool that combines the uncertainty of each individual response to produce the most likely outcome according to all the experts, as well as a possible range of outcomes.

Here’s what the experts had to say this week.

What is the smallest, most likely and largest number of total cases that The COVID Tracking Project will report on April 12?

Among the experts, there was a large spread in the projected number of cases that will be reported on April 12, as well as in each expert’s uncertainty surrounding those estimates.

The individual expert uncertainties are also reflected in the consensus forecast, which projects anywhere between 500,000 and 1.2 million total cases reported on April 12, with 660,000 being the most likely number.

The experts have made these one-week projections in the past three surveys, and the actual recorded case counts have fallen comfortably within their confidence intervals. 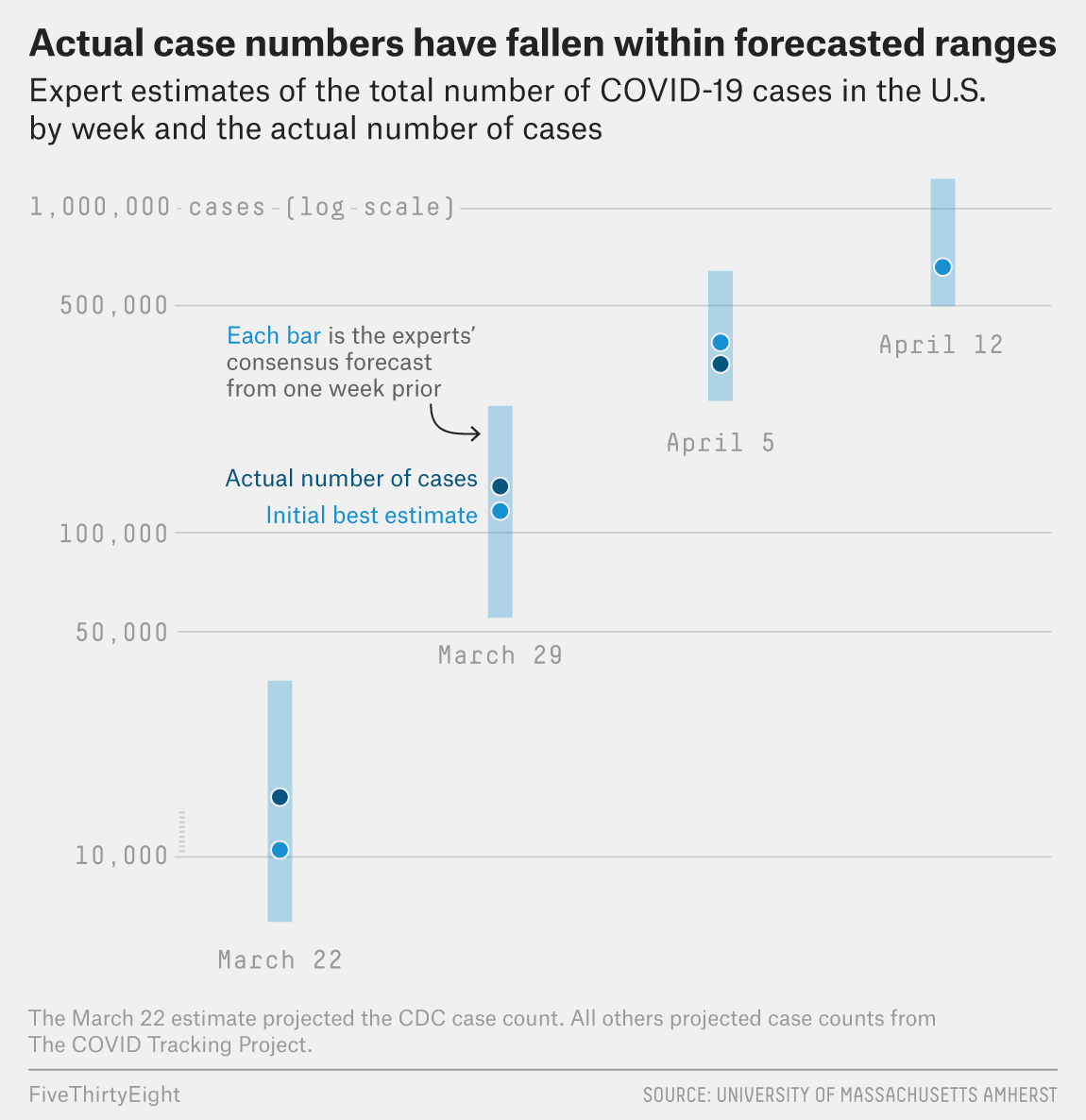 Next week’s case estimates indicate that the experts think the spread of the virus is likely to slow in the U.S., although there’s no guarantee of that if the case count falls near the top end of next week’s range.

Of the next six months, which month will see the most COVID-19 hospitalizations in the U.S.?

This wide consensus distribution — with April, May and June each given a chance of more than 20 percent of containing the hospitalization peak — illustrates the uncertainty among the experts in assessing the trajectory of COVID-19.

“We can project how things will go if we continue the same physical distancing measures we have in place now,” said Mary Bushman, a postdoctoral researcher at Harvard University’s Center for Communicable Disease Dynamics. “But the actual future trajectory depends massively on what society does going forward, and that is still unknown.”

When will the daily number of new hospital COVID-19 admissions in New York City drop below 200?

Bushman said new hospitalizations will probably peak in New York City before they peak in the rest of the country, but there’s no guarantee. “New York City is weeks into the surge of hospitalizations, whereas the rest of the country is only just starting or hasn’t started yet,” they said. “But if the city goes through periods of physical distancing interspersed with periods of relative normalcy, we could even see multiple peaks.”

Finally, the experts think that only 13 percent of all COVID-19 infections in the U.S. had been reported by April 5, and up to 20.2 million people may have been infected at the time.

The number of new cases may be starting to slow for now, but there’s still a great deal of uncertainty in the overall trajectory of the COVID-19 pandemic.