Building a model to forecast the COVID-19 outbreak is really freaking hard. That’s one reason we’ve been following a weekly survey of infectious disease researchers from institutions around the United States.

This week’s survey, taken on March 30 and 31, shows that experts expect an average of 263,000 COVID-19-related deaths in 2020, but anywhere between 71,000 and 1.7 million deaths is a reasonable estimate. The researchers believe that only about 12 percent of all COVID-19 infections in the U.S. have been reported, and they don’t expect that the daily number of reported cases in New York state — which was most recently 7,917 — will drop below 1,000 until around the end of April.

The survey collects each expert’s best estimate for each question, as well as their best-case and worst-case estimates. From those individual responses, the survey organizers — Thomas McAndrew and Nicholas Reich of the University of Massachusetts Amherst — build a probabilistic consensus forecast, which is a tool that combines all of the responses to project the most likely future scenario as well as the range of possible outcomes.

Each expert’s answers contribute to the consensus forecast equally. This week, McAndrew and Reich explored the possibility of weighting experts based on their accuracy in past surveys, but they decided against it. “The performance of individual experts has varied from week to week, and we haven’t found a benefit to using different weights for each expert to build more accurate consensus distributions,” they said.

Here’s what the researchers said this past week.

What is the smallest, most likely and largest number of total cases that The COVID Tracking Project will report on April 5?

When the survey was sent out on March 30, The COVID Tracking Project was reporting about 141,000 COVID-19 cases in the U.S. The survey asked how many total cases will be reported on April 5, and even just a week out, there was a great deal of uncertainty in many of the experts’ forecasts. 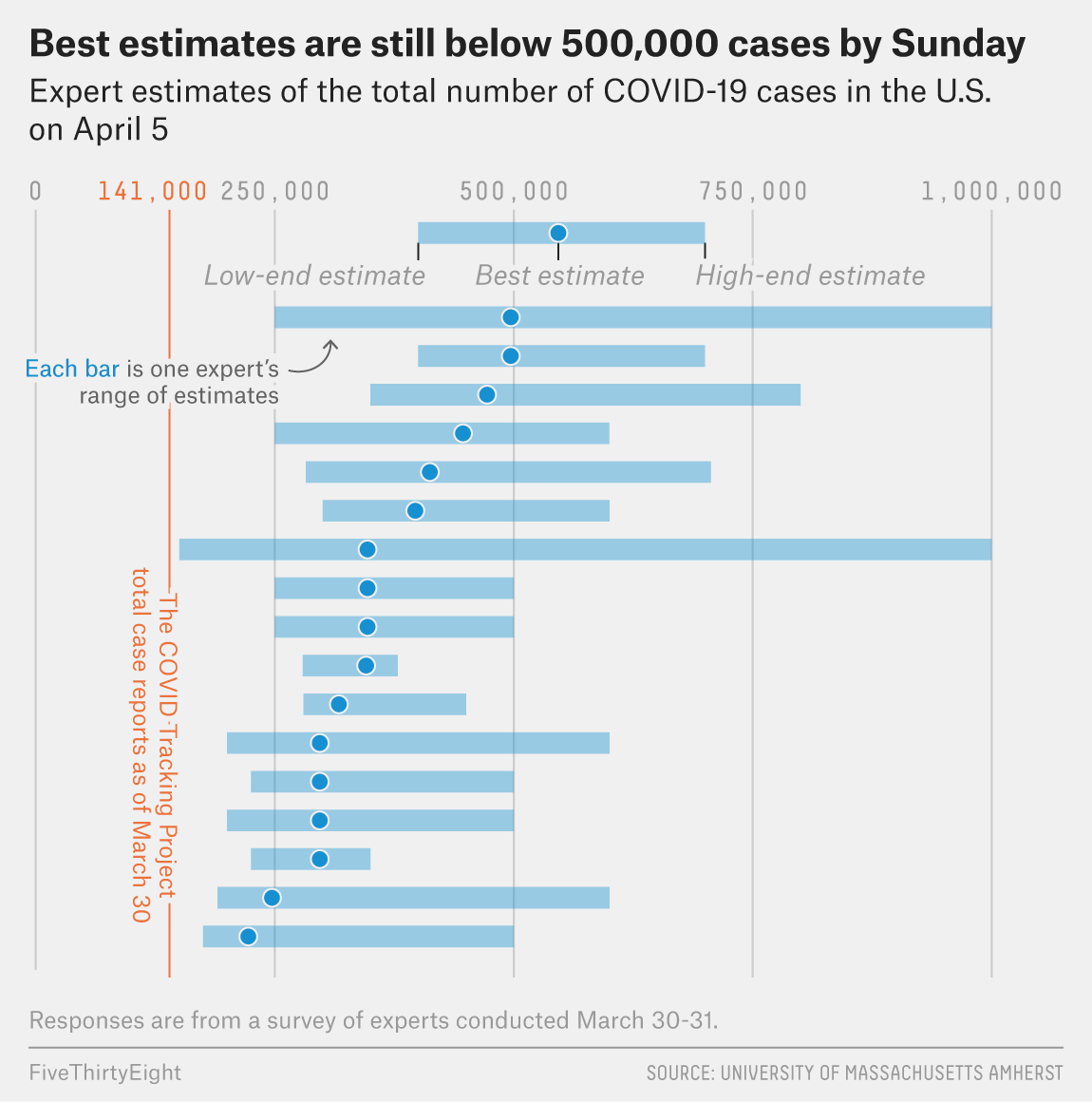 Mary Bushman, a postdoctoral researcher at Harvard University’s Center for Communicable Disease Dynamics, said much of the uncertainty in case counts is related to the availability of testing. “It’s hard to know whether testing capacity will continue to increase and keep pace with increasing numbers of infections.”

How many people will die in the U.S. due to COVID-19 this year? 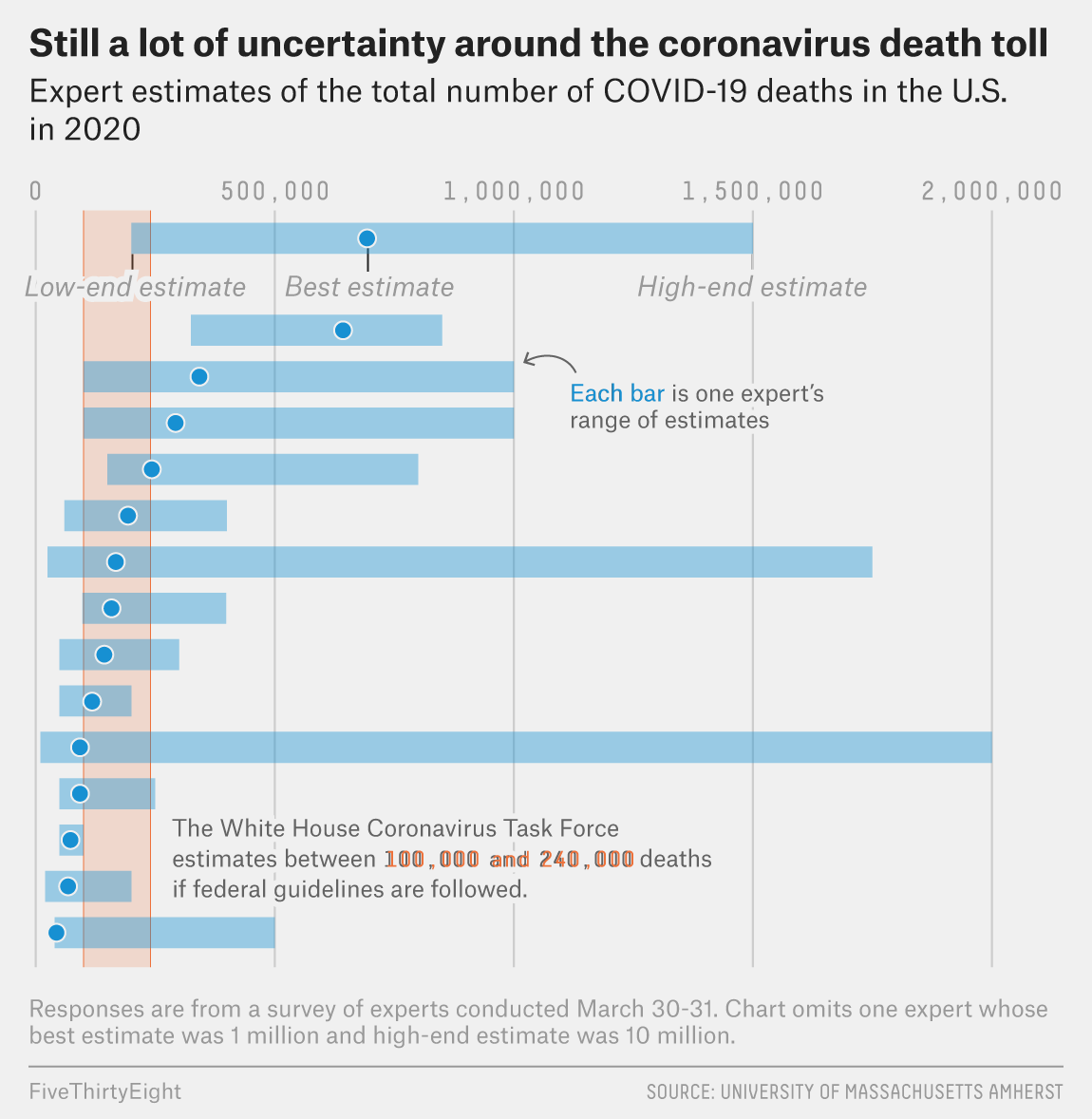 On Tuesday, Drs. Anthony Fauci and Deborah Birx — members of the White House Coronavirus Task Force — estimated that COVID-19 could kill 100,000 to 240,000 Americans even if all federal guidelines are followed closely. But the surveyed experts aren’t assuming those guidelines will be followed, which helps explain their higher consensus forecast of 263,000 deaths and their high-end estimate of 1.7 million deaths.

“I think we can be reasonably confident that most of the U.S. will remain under some social or physical distancing directives for at least the next few weeks,” Bushman said. “But there is significant uncertainty over how well people will comply with these directives and how much they actually reduce transmission, considering all of the activities that are exempted as essential.”

In the three weeks we’ve been tracking the survey, the number of forecasted deaths has increased from 200,000 to 263,000.

How many total COVID-19 infections were actually in the U.S. on March 30?

Although the The COVID Tracking Project reported about 141,000 total U.S. cases on Monday, the experts think the number of infections — symptomatic or asymptomatic — in the U.S. was much higher. 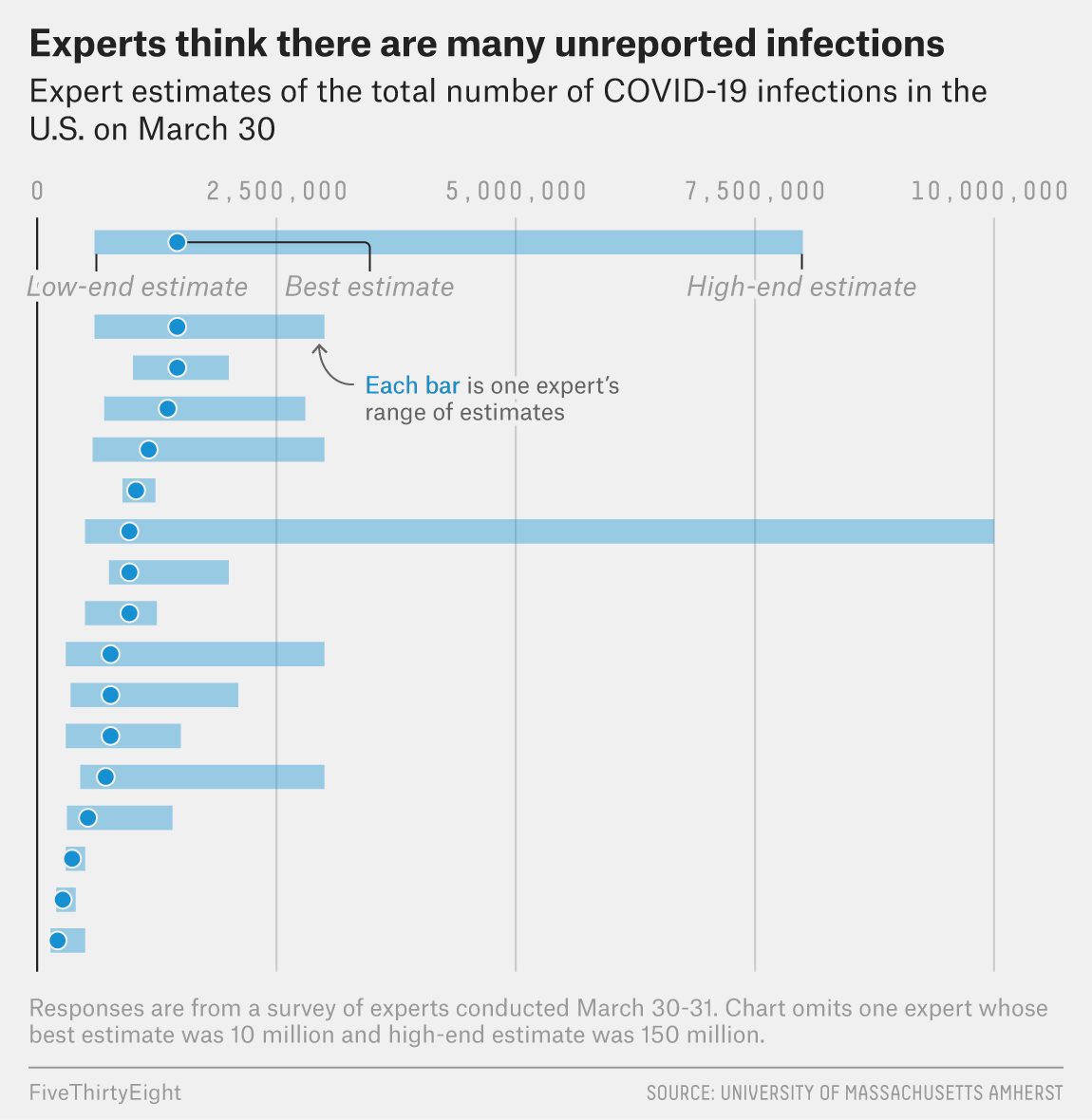 They believe there were between 289,000 and 12.8 million infections, with 1.1 million being the consensus estimate, implying that the experts think that only about 12 percent of all infections have been reported. This is in line with what they’ve reported for the past three weeks, when the share of reported infections has ranged between 9 percent and 12 percent.

When will New York state report fewer than 1,000 new daily cases of COVID-19?

On April 1, 7,917 new cases were reported in New York state, and that daily number has been increasing steadily for weeks.

The experts were asked when they thought the number of daily reported cases would drop below 1,000, assuming that work from home restrictions remain in place. The majority think it will happen sometime in April, but some experts think it’s possible that won’t happen until July. 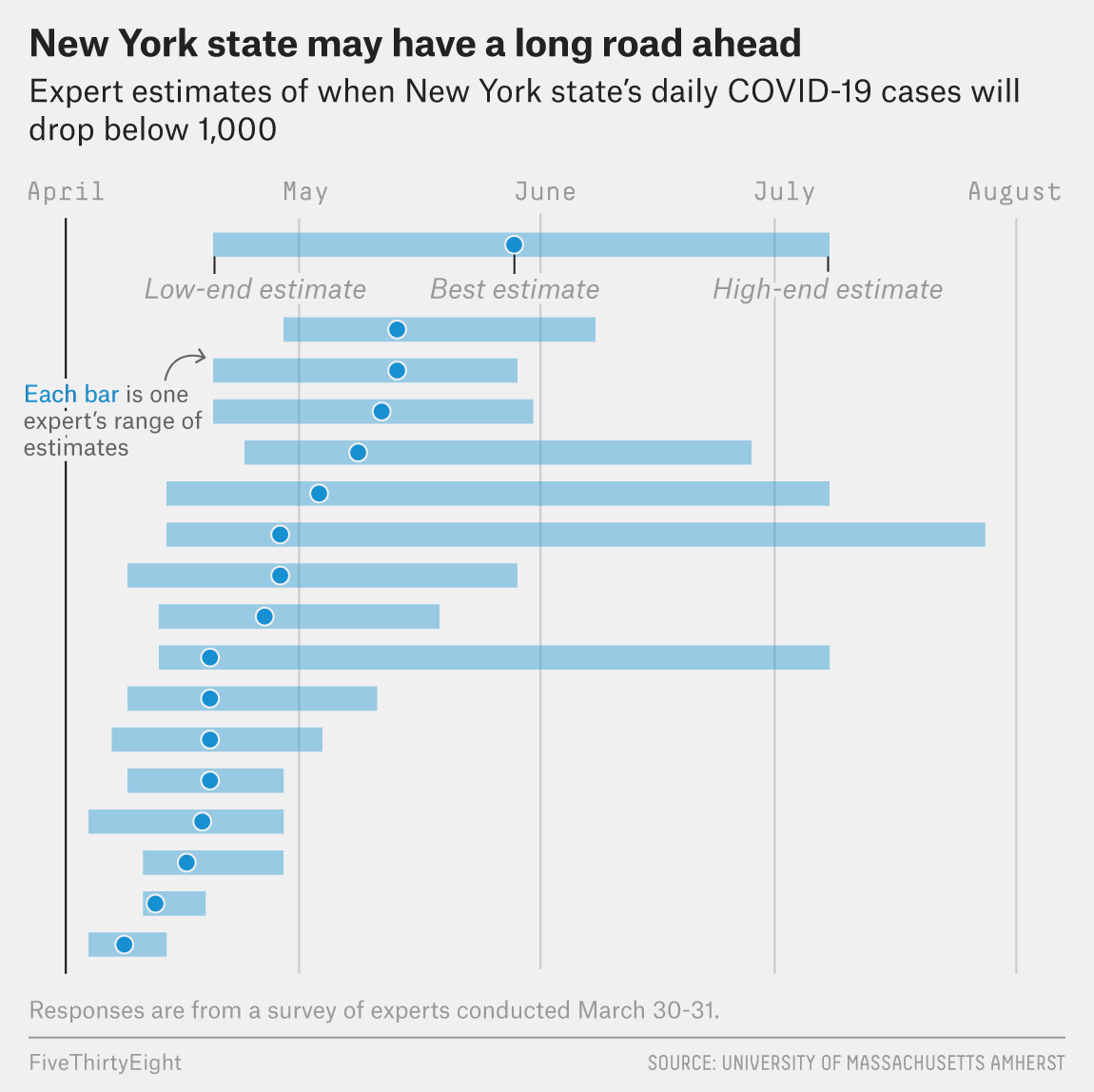 The consensus forecast is that the number of new cases in New York state will drop below 1,000 around April 28, but any date between April 9 and June 9 is a reasonable estimate.

That a group of expert infectious disease modelers is relying more on their experience and intuition than on hard models is yet more evidence that building a COVID-19 model is a huge, huge challenge.