A little more than a year ago, I started writing a column for FiveThirtyEight called Dear Mona where I respond to readers’ questions with numbers rather than words of solace. Last week I got a question from a divorced man named Nathan about whether women or men are more likely to end a relationship. In fact, I get asked more questions about relationships than any other topic. I highly doubt that people are turning to me because they hope to be heartened by my personal track record on the subject — I think readers want to contextualize their experience with information that comes from a wider pool than just the people they know.

A survey by YouGov last month offered some romantic comparisons when it asked almost a thousand U.S. adults how many long-term relationships they’d had so far in their lives. For most people, the answer was pretty low: Three-quarters of respondents gave a number from one to three. (The percentages don’t always add up to 100 in these charts because of rounding.) 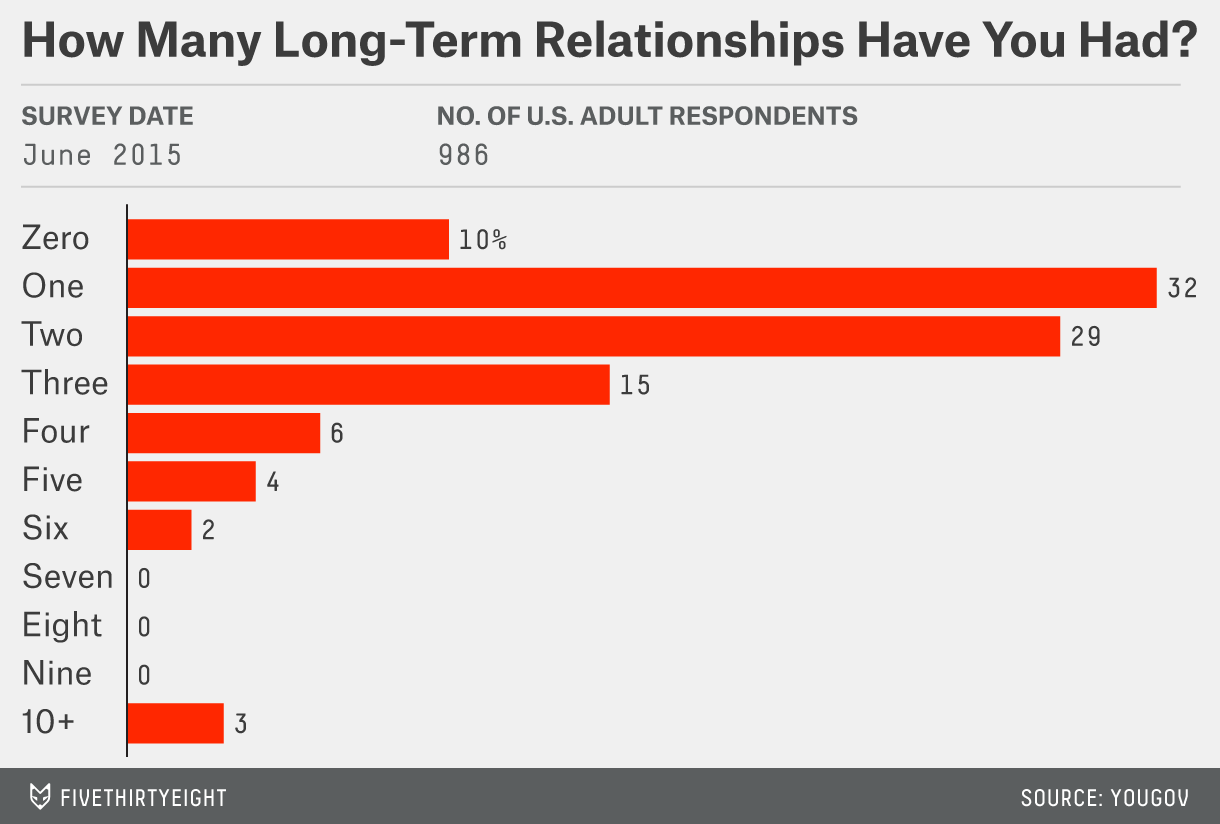 But the “so far in their lives” bit is important, right? If most respondents were in their 20s, then the numbers were bound to be sort of low. And the definition of “long-term relationship” is important, too. Unfortunately the survey didn’t define it before asking people to respond. But I can break down the results by age (keep in mind, though, that there are now only a couple hundred respondents in each age bracket, so these numbers are a bit more prone to error than the ones above). The youngest respondents, those ages 18 to 29, were indeed the most likely to say that they had been in zero long-term relationships. 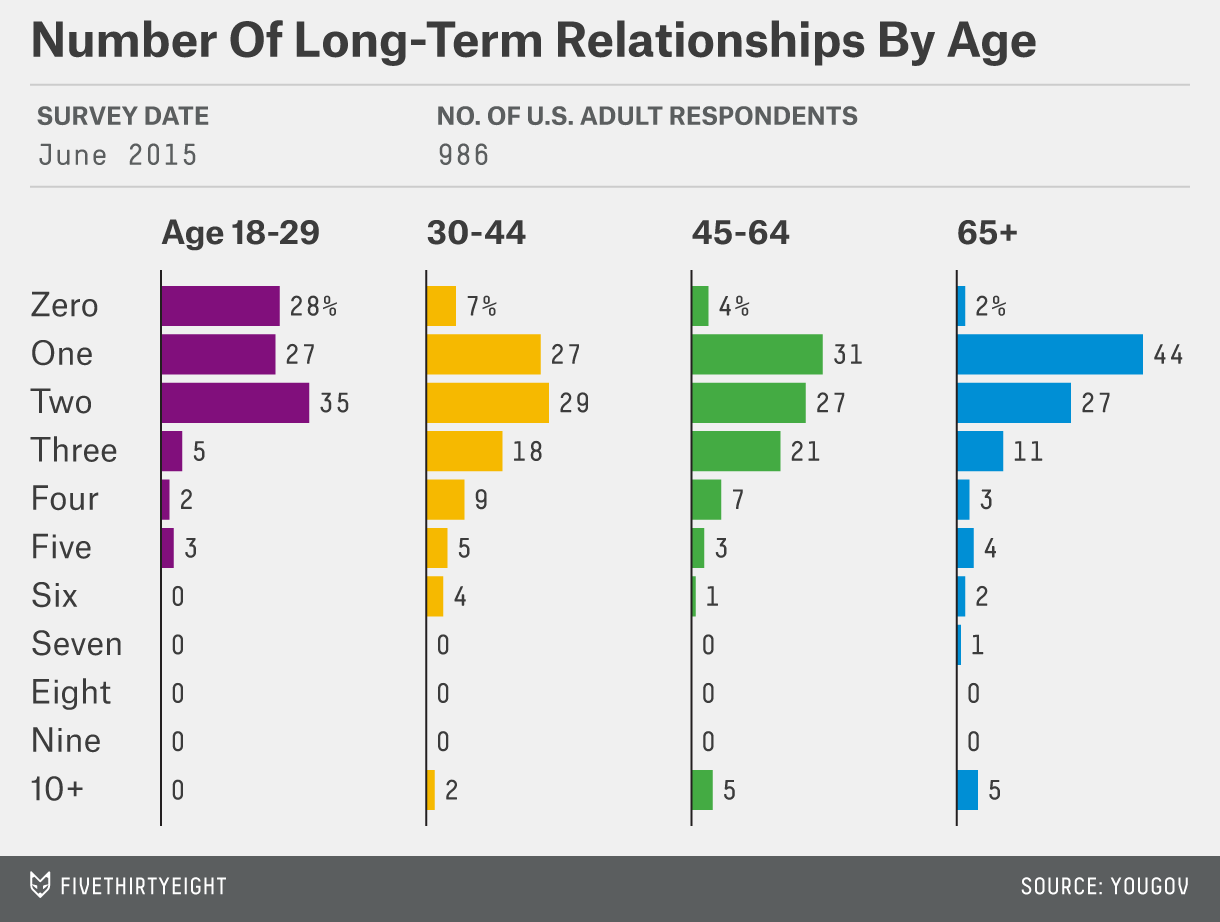 For some people, adding the words “long-term” in front of “relationship” might be an indication of how significant the romance was. YouGov also asked, “How many romantic partners have you said ‘I love you’ to?” — another (but equally fallible, in my opinion) way of understanding how many important relationships someone has had. The pollster found that the breakdown was pretty similar to the one above, meaning that most (but not all) people in long-term relationships say I love you. (Unless those people are saving those romantic “I love you”s for people they aren’t actually dating, in which case these two charts have nothing to do with each other!) 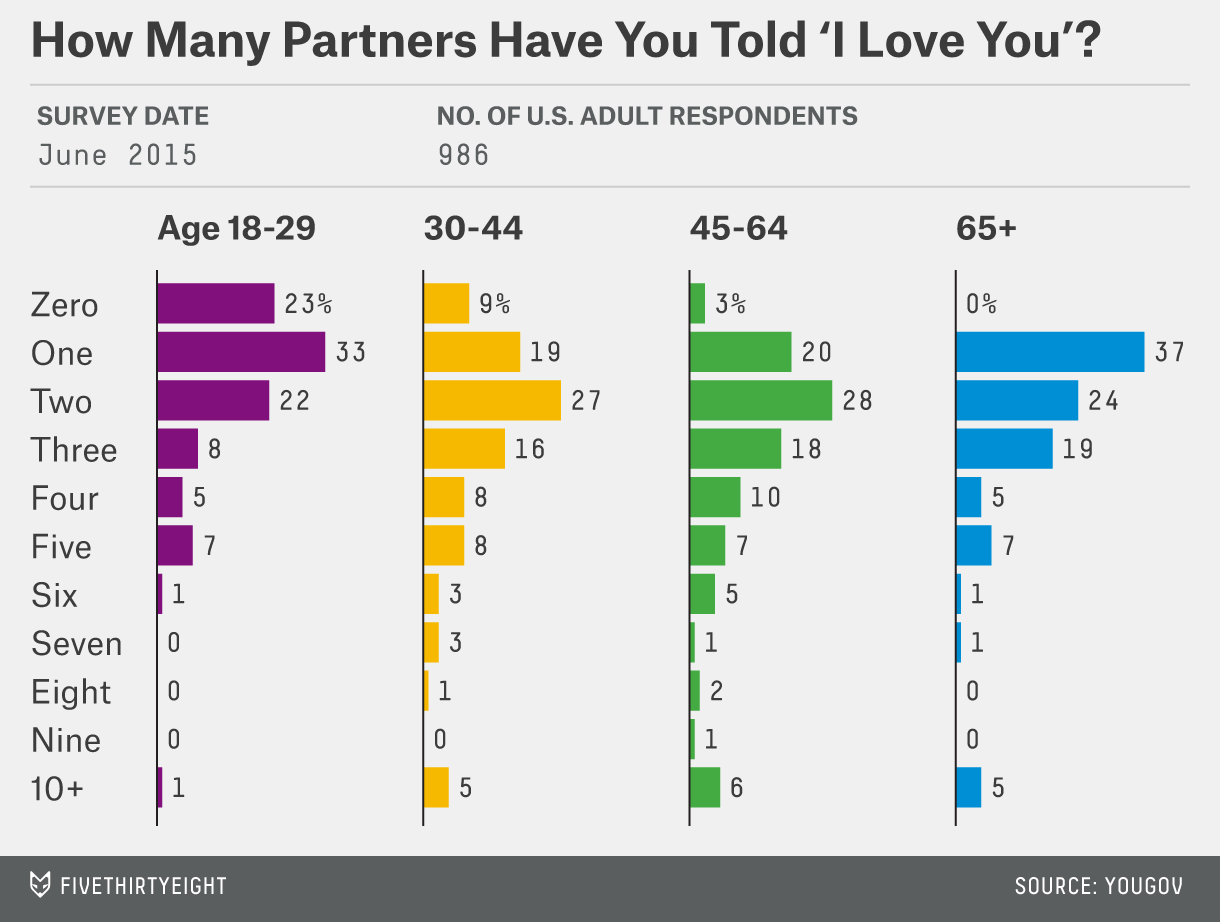 And there’s no data on whether people meant it.

I also looked at whether the number of long-term relationships and “I love you”s varied by gender, political party identification, race, income or where respondents lived. None of these really seemed to matter.

Of all the demographic factors that the survey examined, age seemed to be the only one that affected responses about relationships — which might explain why the curious readers who write to me about romance tend to be the younger ones.