A couple of years ago, my wife told me that she wanted a divorce. I recently read an article claiming that anywhere from 60 percent to 85 percent of divorces are initiated by the wife. How likely are men to initiate divorce compared with women?

I’m not sure where you got your numbers, but they’re not far off. A review of the literature on divorce that appeared in the journal American Law and Economics Review in 2000 (I can’t find anything as comprehensive published since then) found that 60 percent to 80 percent of divorces in the U.S. are filed by women.

You might be surprised to learn that the female majority in divorce filings isn’t a modern phenomenon. The researchers, Margaret F. Brinig and Douglas W. Allen, looked at 25 different U.S. data sets. The oldest examined the 9,937 divorces that took place nationwide in 1867 and found that 62 percent were filed by women.

The researchers looked at different variables to understand why divorces tend to be filed by women. They suggest three main explanations:

I have only one side of the story here, Nathan — which is a problem because there’s data showing that couples sometimes disagree about who initiated a divorce.

In 2005, sociologists presented their findings on divorce initiation at the annual meeting of the Population Association of America using data from the National Survey of Families and Households from the University of Wisconsin’s Center for Demography. They found that when men said their wives’ desire to end the relationship was stronger than their own, 6 percent of those ex-wives disagreed, saying it was their husbands who wanted the divorce instead. Conversely, when men said they were the ones with the greater desire to end the relationship, 16 percent of their ex-wives disagreed, saying they themselves wanted the divorce more.

It’s not just marriages. I also have data on breakups of long-term relationships, and the overall takeaway is the same: Women are more likely to dump a partner (to use the brutal common expression) than to get dumped by one.

A YouGov survey of nearly 1,000 U.S. adults last month found that 1 in 5 women said she had only ever been the one to end a long-term romantic relationship, compared with 1 in 14 men. (YouGov didn’t ask about sexual orientation, so some of the responses probably refer to same-sex relationships.) Overall, though, a third of all men and a third of all women surveyed said they had experienced being both the dumper and the dumpee. 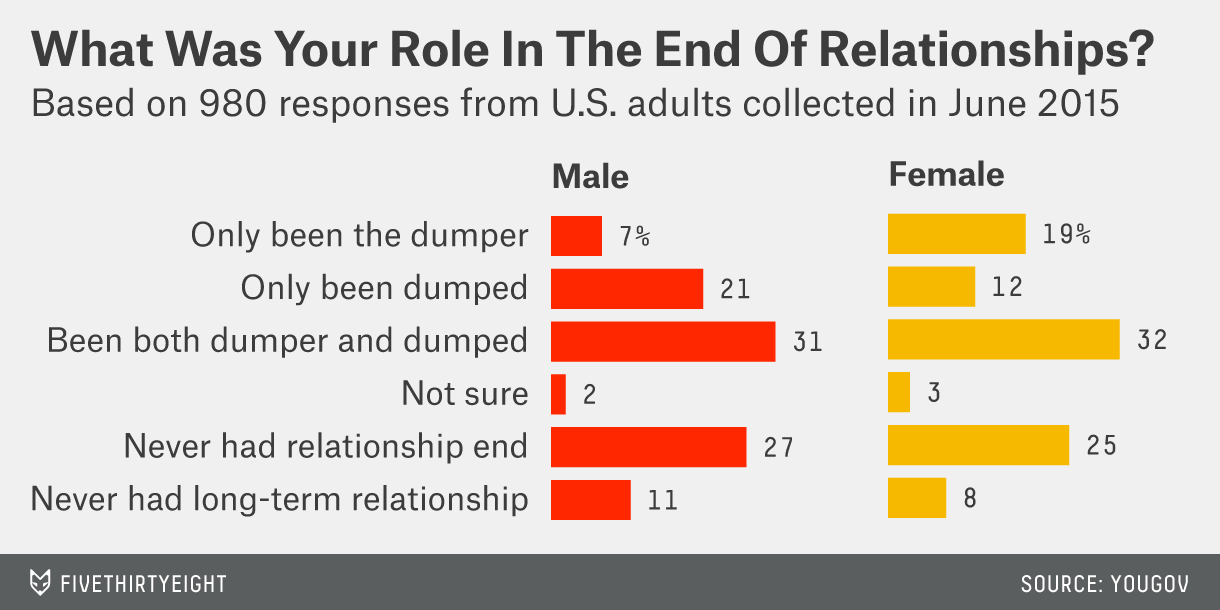 The YouGov survey also found that women were less likely than men to talk to their exes — only 36 percent of women said they were still in touch with at least one of their former partners, compared with 52 percent of men. That’s somewhat surprising given that women are no more likely than men to say they think it’s a good idea to cut former partners out of their lives.

One last, slightly depressing thing: Almost half of all respondents, regardless of gender, said they “truly regret” at least one of their past relationships.

I hope you’re not one of them, Nathan. If you are, try to take comfort from the knowledge that you’re not alone. Overall, the numbers suggest that women are more likely to say they’re the ones making the decision to get out. The fact that the divorce statistics say the same thing suggests that the survey data isn’t just pride talking.