FiveThirtyEight has been publishing forecasts of the men’s NCAA basketball tournament since 2011, when we were at The New York Times. Every year, readers asked us why we weren’t forecasting the women’s tournament, too. Wait till next year, we always said. But we got a little tired of that. So this year, we have March Madness predictions for the women’s tournament for the first time.

The basic structure of the women’s forecasts is the same one we use for the guys:

However, there are several challenges unique to the women’s tournament. One is the comparative lack of data — a persistent problem when it comes to women’s sports:

These differences are pretty minor, though. If we applied the women’s formula to the men’s data, it would change the favorite in only a couple of games.

The other issue is the one I alluded to before: There are far bigger talent disparities in the women’s game. In the men’s tournament, the biggest favorite we have in any one game is Kentucky, which has a 99.6 percent chance to win its opening game against either Manhattan or Hampton. That’s high relative to past men’s tournaments — often we don’t have anyone break 99 percent. But it’s paltry when compared with the UConn women’s 99.986 percent chance of winning their first game, against St. Francis College. Manhattan/Hampton have about a 1 in 250 chance of upsetting Kentucky — about 30 times more likely than St. Francis’s chance of offing UConn, which is just 1 in 7,000.

These extremely unlikely events, sometimes called “Black Swans,” can be hard to model accurately. When we originally applied the men’s model to the women’s data, which estimates these probabilities based on a normal distribution, it gave St. Francis only a 1 in 2.5 million chance of beating UConn! That seemed dubious to us: There have been only about 2,000 games in the history of the women’s tournament,2 not enough data to distinguish thousands-to-one improbabilities from millions-to-one “Black Swans.” So we took a cue from the Massey Ratings, which apply fat-tailed distributions instead of normal distributions to estimate the probability of one women’s team beating another. St. Francis is still the longest of long shots, but it would be a great bet at 3-million-to-1 odds.

The dominance of women’s teams like UConn and Notre Dame also creates another statistical problem. In the men’s game, the power ratings for the 351 Division I teams are approximately normally distributed. Based on a normal distribution, for instance, you’d expect eight teams to have a Sagarin rating of 90 or above, which corresponds to being two standard deviations above average. In fact, 10 of them do this year. Not perfect, but pretty close.3

This assumption doesn’t work so well for women’s data, however. Since 2005, there have been 20 women’s teams with a Massey rating at least three standard deviations above average, when there only “should” have been five such teams based on a normal distribution. 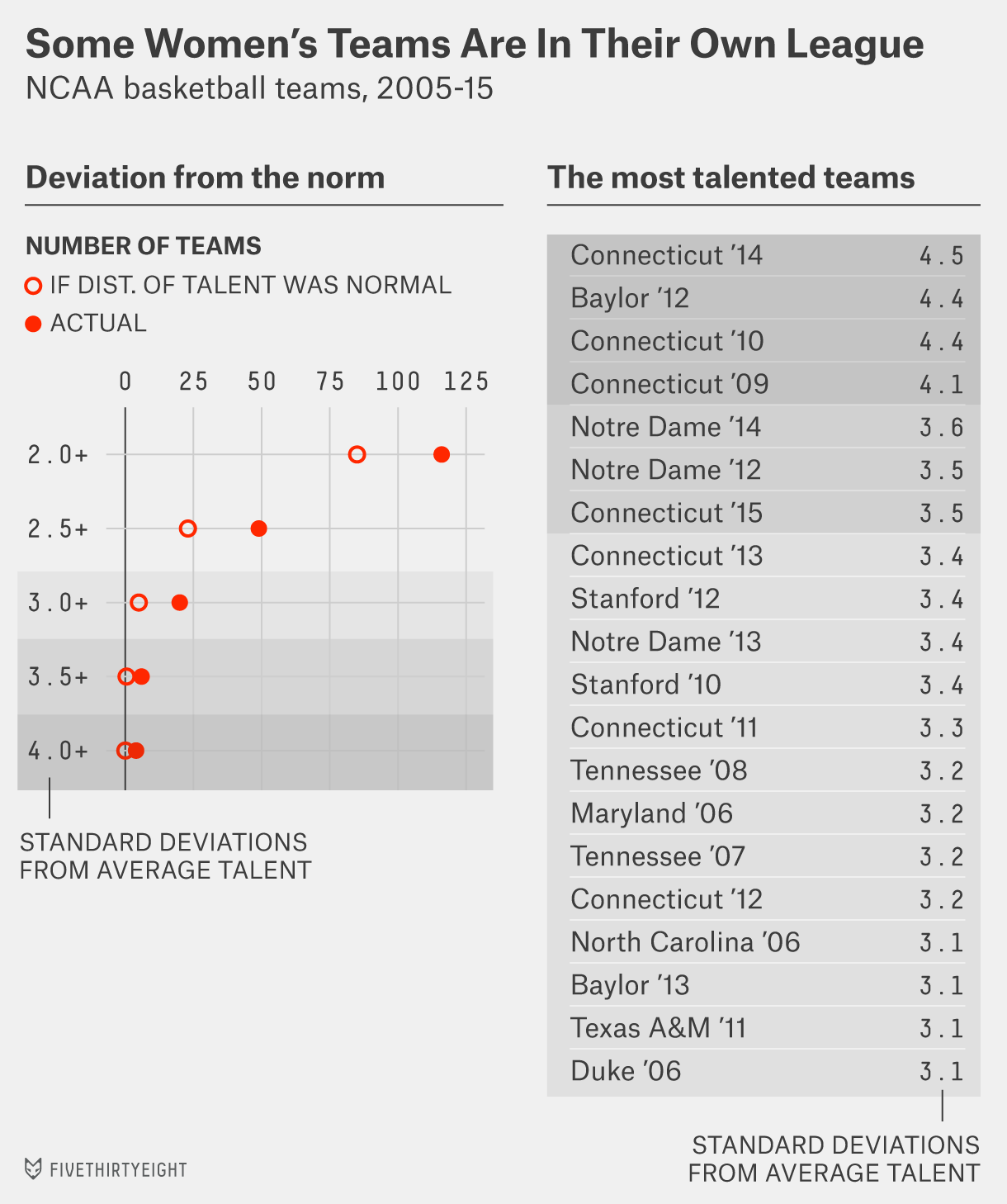 Put another way, it’s almost as though the top women’s teams (and particularly UConn) are playing in a whole different league. They’re huge positive outliers relative to the rest of the field. This is something we see more often in European contexts (like the Scottish Premiership, where either Celtic or Rangers have won the past 29 championships) than in American sports.

And even though those dominant teams don’t need any help, the NCAA gives them some. The first two rounds of the women’s tournament are played at campus sites; under the NCAA’s current rules, the top four seeds in each region get to host. So Connecticut is playing its first two games in Storrs, Connecticut, and Notre Dame its first two games in South Bend, Indiana, and so forth. The only exception is Louisville, the No. 3 seed in the Albany region, whose arena (the unfortunately named KFC Yum! Center) is occupied by the men’s tournament; No. 6 South Florida gets to host the first two rounds instead. Our model accounts for home-court advantage as part of its geographic adjustment. On average, it’s worth about 3.5 points — about the same as in the regular season4 — but it depends on how far the road team has to travel.

Add it all up, and UConn is a 74 percent favorite to win the women’s championship — a huge favorite even compared with Kentucky in the men’s tournament. And we hope you’ll keep checking out the interactive once the women tip off Friday — just as for the men’s bracket, we’ll be updating the probabilities throughout the tournament.