In contrast to the parity of the recent past, this year’s NCAA men’s basketball tournament has a clear front-runner: the undefeated Kentucky Wildcats. FiveThirtyEight’s March Madness Predictions give the Wildcats a 41 percent chance to win it all and finish 40-0. Kentucky’s chances are well ahead of a group of teams — Villanova, Arizona and Wisconsin — that have about a 10 percent chance each.

I’ll have a longer take on the Wildcats and this year’s top-heavy bracket on Monday morning. But for now, we wanted to be sure you saw our numbers as soon as they were ready. You can find our interactive here, including the probability of each of the 68 teams invited to this year’s dance advancing to each round of the tournament.

The methodology behind our forecasts is largely the same as in past years. Our forecasts have done reasonably well — “calling” the winner of the tournament correctly in two of the past three years. And they’ve been well-calibrated historically, meaning the teams we’ve listed as (for instance) 70 percent favorites have in fact won about 70 percent of the time. We don’t see a lot of reason to mess with our system.

At the core of the forecasts is a power rating for each team estimated from a composite of five computer-generated power rankings and two human rankings. By nature, our rankings are pretty conservative since they blend information from several different systems together.1 These are the five computer systems we use:

The two human rankings are:

The seven systems are weighted equally and adjusted to be on a common scale.3 Here are how the various systems rated the North Carolina Tar Heels as of Sunday evening,4 for example: 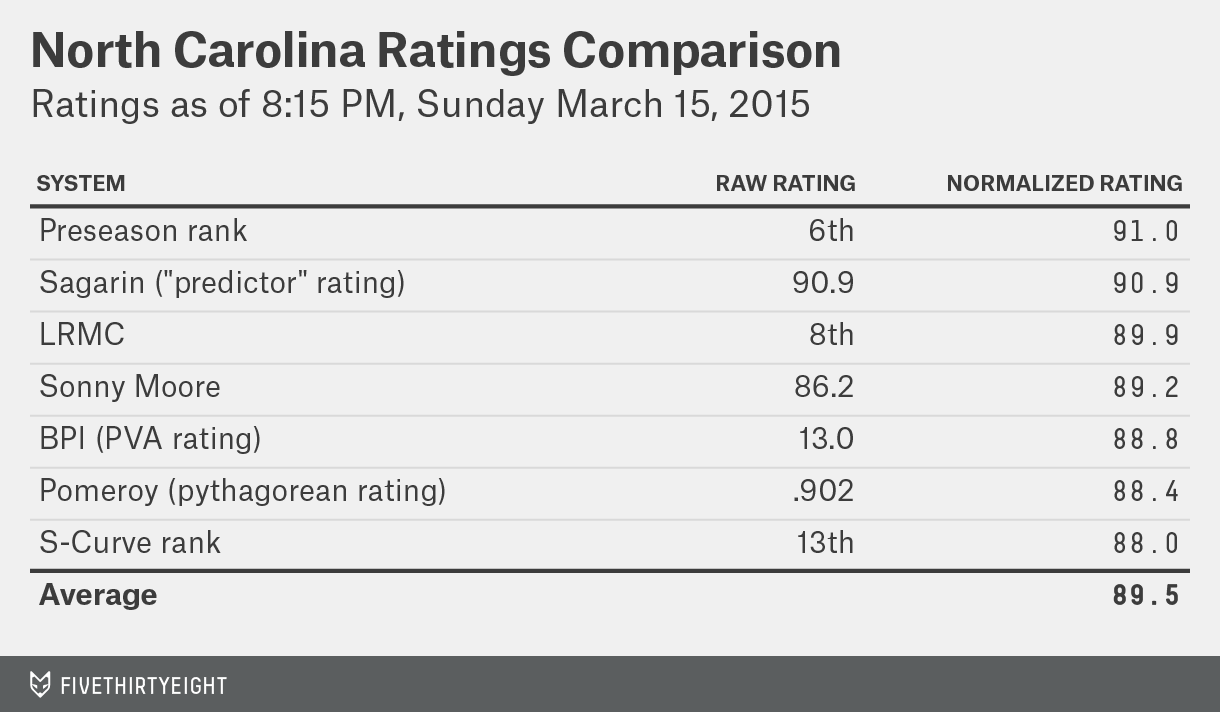 While all of the Tar Heels’ ratings are pretty close, their worst one is from where the committee placed them on the S-curve, 13th, suggesting that they were slightly underseeded. Their best rating comes from their preseason ranking, by contrast. We know it might seem unusual to blend preseason rankings with six other systems that rank a team’s current form, but there’s a long history of teams reverting to preseason expectations in the postseason. That included last season, when UConn and Kentucky, who were rated highly before the season, overcame a middling regular season to meet each other in the national championship as No. 7 and No. 8 seeds. Maybe North Carolina can do something similar this year.

The ratings are then adjusted for two factors:

We’ll be updating the bracket at the conclusion of every batch of games. You may also see some minor changes before the First Four tipoff in Dayton, Ohio, on Tuesday night, based on the availability of new injury information and power ratings.

Teams’ power ratings also change at the end of each game. If a No. 13 seed upsets a No. 4 seed, that’s a sign the team was underestimated originally, and our program will boost its rating for the rest of the tournament. If a No. 2 seed needs overtime to get by a No. 15 seed despite being a 30-point favorite, its rating will go down.

However — this is a new feature this year — you’ll be able to “rewind” the bracket to see what our forecast said about each team at the conclusion of each day of play.

Anything else new this year? The big news is that we’re going to be forecasting the women’s tournament for the first time. Those numbers will go up Tuesday morning.

On the men’s side, there are a couple of methodological changes, but they’re very minor:

Much more to come Monday and over the next three weeks. Happy bracketing!