We haven’t had that much to say about Mitt Romney’s choice of a vice-presidential nominee — mostly because it just isn’t something that lends itself to rigorous analysis.

But let’s focus on the part of the problem where our tools — particularly, the simulation program that runs the FiveThirtyEight presidential forecast — come in handy. Whatever else they do or do not accomplish for Mr. Romney, his potential running mates could improve his standing in their home states, potentially changing the outcome there.

Mr. Romney should not expect any miracles from his choice of a running mate. Historically, they have gained their ticket a net of two percentage points, give or take, in their home states.

How much of a difference could two points make in a state like Florida? And how much would this affect the overall electoral calculus? The simulation program can measure these effects.

Perhaps, however, we have gotten ahead of ourselves. The effect of the vice-presidential nominee varies a bit from election to election and from candidate to candidate. So as a prerequisite, we should ask: which of Mr. Romney’s potential running mates are actually popular back at home?

I looked up approval and favorability ratings for 14 of Mr. Romney’s more plausible choices. This list includes most of the more commonly discussed names — plus a few other candidates who hail from swing states and whom I was curious about. For each candidate, I calculated an average positive and negative rating based on the home-state polls, with approving or favorable ratings from voters counting as positive marks, and disapproving or unfavorable ratings as negative ones.

(Four candidates — Gov. Bob McDonnell of Virginia, Gov. Chris Christie of New Jersey, Senator Marco Rubio of Florida, and former Senator Rick Santorum of Pennsylvania — have been polled frequently enough that I used their numbers from this year alone. For the rest, the data was sparser, so I included all polls since the conclusion of the 2010 midterm election in the average. If a given polling firm tested a candidate’s ratings multiple times during this period, I averaged the numbers across each of their surveys before placing them into the average with the rest of the polling firms, so as not to give any one pollster’s method too large an impact.)

Here’s some good news for Mr. Romney: in an era when many politicians are unpopular, a number of his potential choices are pretty well liked back at home.

Five candidates stood out as having especially strong positive ratings with their home-state voters. These were Mr. McDonnell of Virginia, along with Govs. Susana Martinez of New Mexico, Bobby Jindal of Louisiana and Brian Sandoval of Nevada, and Senator John Thune of South Dakota. The ratings for Mr. Christie and Mr. Rubio were also fairly strong.

Another of Mr. Romney’s potential choices, Representative Paul Ryan of Wisconsin, drew more mixed reactions. Although Mr. Ryan should win his home district, pollsters who tested his numbers throughout Wisconsin found more tenuous results, with 38 percent of voters giving him a positive rating and 33 percent a negative one.

Some candidates are relatively anonymous, even in their home states. Senator Rob Portman of Ohio did all right with voters who expressed an opinion about him, with 33 percent giving him a positive rating and 25 percent a negative one. But a plurality of voters in Ohio, 42 percent, either did not know Mr. Portman’s name or felt so indifferently about him that they did not express an opinion.

Finally, there were two potential running mates who actually had net-negative ratings in their home states. These were Mr. Santorum, along with former Gov. Tim Pawlenty of Minnesota, who ended his second term in 2010 being somewhat unpopular in his home state. Whatever other virtues these candidates have, helping Mr. Romney to carry their home states is unlikely to be one of them.

We can translate these positive and negative ratings into an estimate of the candidate’s impact on the popular vote in his home state.

The average personal rating among the candidates was plus 13. We’ll assume that a candidate with a plus 13 positive rating would improve Mr. Romney standing by two points in his state, the historical average impact of a vice-presidential candidate. If a candidate had a better or worse rating than that, we’ll assume that her impact was proportionately larger or smaller.

For instance, Ms. Martinez had a net-positive rating of plus 27, about twice the average for all the candidates. So we’ll assume that her home state impact is also twice as large — four points for Mr. Romney rather than two. The translations for the remaining candidates are shown in the table below. Mr. Rubio, for example, is estimated to improve Mr. Romney’s standing in Florida by a net of 2.3 percentage points by this method.

Let’s begin with the first part of the question. On Wednesday morning, I ran 50,000 simulations from our forecasting program. I included the latest Quinnipiac University/New York Times/CBS News polls from Virginia, Colorado and Wisconsin in the simulation (they had not been available as of our previous forecast update), but otherwise this is the same program that we run every day to generate our Electoral College forecasts.

In the case of Mr. Rubio and Florida, adding a net of 2.3 percentage points to Mr. Romney’s standing there won him the state 7,469 times (out of 50,000 simulations) when he otherwise would have lost it, or about 15 percent of the time. This was the third-highest figure, behind Mr. Sandoval of Nevada and Mr. McDonnell of Virginia. 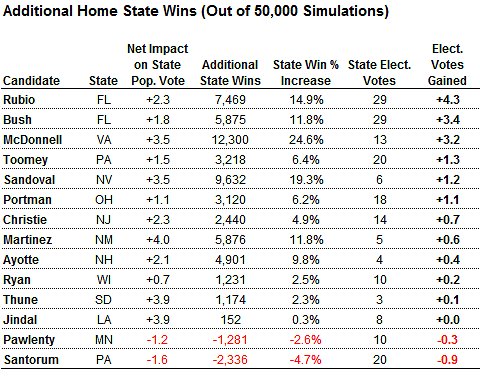 Other candidates, despite being popular back home, were less likely to actually swing their states. Mr. Thune and Mr. Jindal, for instance, rarely won Mr. Romney South Dakota or Louisiana in the simulations — because Mr. Romney was already winning those states to begin with.

Mr. Christie, of New Jersey, did swing his state to Mr. Romney in about 5 percent of the simulations. But most of the time, Mr. Romney was just too far behind there to catch up, despite Mr. Christie’s popularity.

What we’re really interested in, however, is those cases in which the candidate not only won Mr. Romney the home state, but in
so doing, also handed him the presidency.

So I scouted for simulations in which the vice-presidential candidate swung his state to Mr. Romney when Mr. Romney otherwise would have lost it — and, moreover, in which the extra electoral votes that Mr. Romney gained from this state were enough to win him the Electoral College when he did not win it originally.

In Mr. Rubio’s case, for instance, this would mean simulations in which:

(a) Barack Obama originally won Florida, but by no more than 2.3 percentage points — the impact that we calculate that Mr. Rubio would have in aiding Mr. Romney there, and, 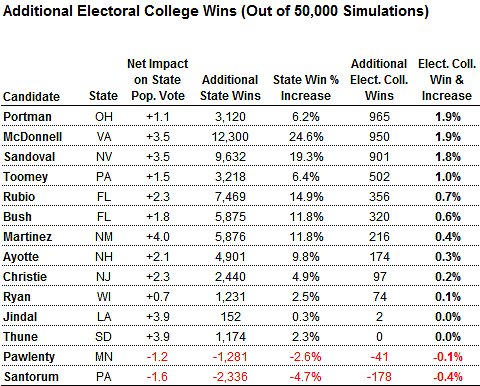 For Mr. Rubio and Mr. Romney, these simulations came up 356 times out of 50,000 instances, or about 0.7 percent of the time. The interpretation of this is simply that, other things being equal, the choice of Mr. Rubio as his vice-presidential nominee would increase Mr. Romney’s chances of winning the Electoral College by 0.7 percent, based on Mr. Rubio’s home-state impact.

Other candidates swayed the outcome a bit more often. The top-ranking one was Mr. Portman of Ohio.

Even though Mr. Portman is not all that well-known and not all that popular with voters back at home — we assume that he’d improve Mr. Romney’s position in Ohio by about 1 percentage point — that single point could matter since Ohio is such a disproportionately important state. That extra point in Ohio changed the outcome of the Electoral College in 965 of the 50,000 simulations, or just less than 2 percent of the time.

Mr. McDonnell and Mr. Sandoval had a similar impact. They also improved Mr. Romney’s chances of winning the Electoral College by about 2 percent in the program.

The reason is that the vice-presidential effect is slightly asymmetrical. Since the running mate should have a positive impact on Mr. Romney’s standing in the nominee’s home state, what Mr. Romney would ideally want is a candidate from a state that was otherwise just a wee bit Democratic-leaning. In that case, the running made would have the fullest effect, potentially flipping a blue state to a red one.

This describes Nevada to a T. It’s become a bit Democratic leaning, based on the polls there so far this year and its recent voting, but not by much. Mr. Sandoval could turn the state from slightly Democratic-leaning to slightly Republican-leaning, which is the optimal case for Mr. Romney.

There would not be quite that sort of impact in Florida. Mr. Romney actually trails there — very slightly — according to the current polls. Nevertheless, Florida is normally a bit Republican-leaning relative to the country as a whole, and Mr. Romney trails by larger margins in a number of other important states. If Mr. Romney can’t win Florida on his own — without Mr. Rubio’s help — things are probably fairly hopeless for him no matter what.

Then again, even the top-ranking candidates only changed the Electoral College outcome 2 percent of the time, other things being equal. Is that really worth it to Mr. Romney?

Probably not if the candidate comes with other disadvantages, since vice-presidential nominees can fall flat when they venture beyond their home turf. Sarah Palin was extremely popular in Alaska when John McCain named her as his running mate in 2008, for instance, but something was lost in translation when she hit the national stage. Thus, the home-state effect is more a good tiebreaker between two otherwise-equal candidates than something that should govern Mr. Romney’s decision.

Still, the election is close enough that these marginal effects could matter — and an extra point for Mr. Romney in Ohio or Virginia would be awfully nice for him right now.