Looking ahead to November, the presidential race could decide more than just who the next president is. It could also determine which party controls the Senate or House or even a state’s legislature. And that’s because of something political science calls the “coattail effect,” which is when the popularity of a candidate at the top of the ticket — we’re most interested in presidential coattails — boosts the fortunes of candidates from the same party lower down on the ballot.

Political science has long tried to measure just how big of an effect this is, and most research does suggest that down-ballot candidates gain at least a few votes thanks to the performance of the candidate at the top of the ticket, but estimates vary as to the actual size of the coattail effect. For instance, in House races, where we have the most data, some studies have found anywhere from a 0.2-point to 0.5-point bump for a House candidate for every 1-point increase the presidential candidate experiences in the vote share. That may not sound like much, but if a candidate in a competitive House seat has attracted 48 percent of the vote by herself, a strong performance by the same party’s presidential candidate could boost her vote share just enough that she clears the 50 percent mark and wins.

And as the chart below shows, the margins in presidential and House races do tend to move together. This alone doesn’t prove the existence of a coattail effect, but it does show how closely these votes are connected. For instance, in 2004, President George W. Bush won reelection by 2.5 points while the GOP won the national House vote by 2.6 points. Of course, it’s not always so symmetrical — in 1996, President Bill Clinton won reelection by 8.5 points, but Democrats won the House vote by only 0.3 points. Overall, though, from 1992 to 2016, we found a strong correlation (0.655) between the national margins for presidential and House races.1 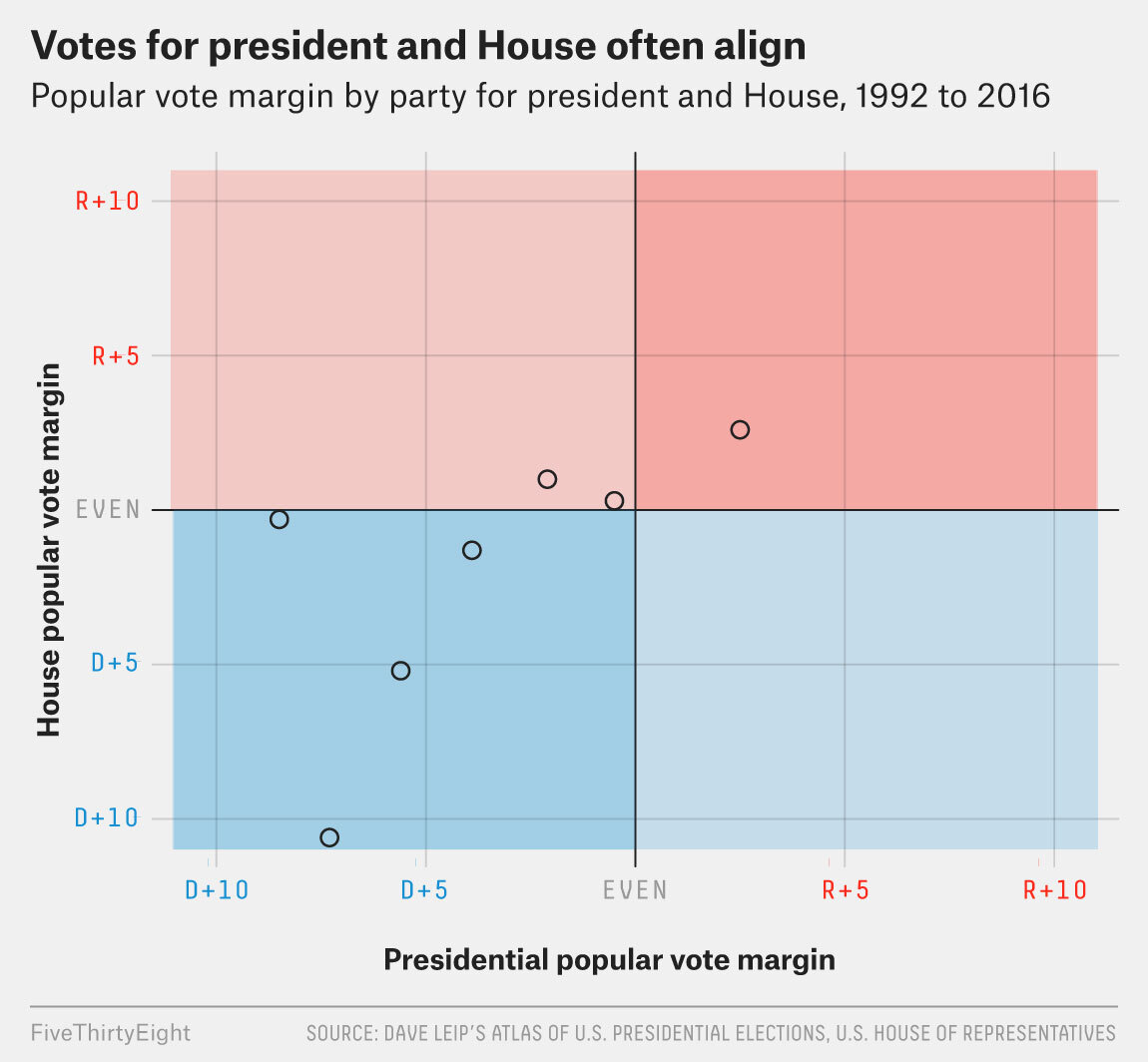 James Campbell, a political scientist at SUNY Buffalo who has studied the presidential coattail effect in congressional races, found that in a typical presidential election year from 1868 to 1988, a party picked up an average of two to three House seats because of the coattail effect. And from election to election, the effect might be even stronger. Political scientists Franco Mattei and Joshua Glasgow looked at House contests from 1976 to 2000 and found that a strong presidential candidate could swing almost 10 percent of contested House races.

There’s been less work on the coattail effect in the Senate because, unlike the House, it doesn’t have truly national elections. Still, a 1991 study by Campbell and Joe Sumners found that Senate contenders got an average boost of 0.2 points per 1 percent increase in the vote of the same party’s presidential candidate between 1972 and 1988, which they concluded affected the outcomes in two to three races per cycle. Again, that might not sound like much, but that’s enough to flip the chamber if it’s closely divided — as it is right now. Additionally, a non-presidential study of the coattail effect by Marc Meredith, a political scientist at the University of Pennsylvania, found that gubernatorial candidates improved the votes of lower-office contenders from their party by 0.1 to 0.2 points.

Estimating the coattail effect in a given cycle is difficult, though, as there’s no real consensus about its size. The studies cited here all have different estimates, and one study of House contests from 1916 to 2006 by political scientist Ray Fair found that House candidates’ vote shares were boosted anywhere from 0.8 points to -0.7 points, which calls into question how much we can really generalize about the positive effect of coattails.

The experts I spoke with were unsure of coattails’ precise effect because of other factors that can affect voting, like incumbency or the state of the economy. For instance, some studies have found the coattail effect is notably stronger in open-seat contests where no incumbent is running for reelection. And according to Campbell, something like the economy has more electoral consequences than the coattail effect by itself, but the effect is often a by-product of those big-picture electoral conditions. “If the economy brings some more Republicans out to vote for Trump, that’s going to help Republicans as they’re going to be there to vote in congressional races,” said Campbell.

Experts argue that where we really see the coattail effect is in turnout among a party’s base. “The way [the top of the ticket is] going to benefit the down-ticket candidates the most is by getting members of that party to show up to vote,” said Meredith. This is especially true in our polarized era that has high rates of straight-ticket voting. “For every 10 partisans to get out to vote for a presidential candidate, you’re probably getting eight or nine of them voting for the [same party’s] House candidate,” added Campbell.

But one reason why the coattail effect isn’t more pronounced is a countervailing force at work known as “balancing,” which is when someone votes against the party they think will win the presidency in down-ballot races. Looking at elections from 1948 to 2012, political scientist Robert Erikson of Columbia University found that if a presidential candidate was heavily favored to win, highly engaged, moderate voters often cast House votes for the other party — an “ideological hedge” of sorts. It’s true that only a relatively small number of voters do this, and split-ticket voting for president and Congress has generally declined in recent years, but enough voters still do this that it can make a difference in House races.2 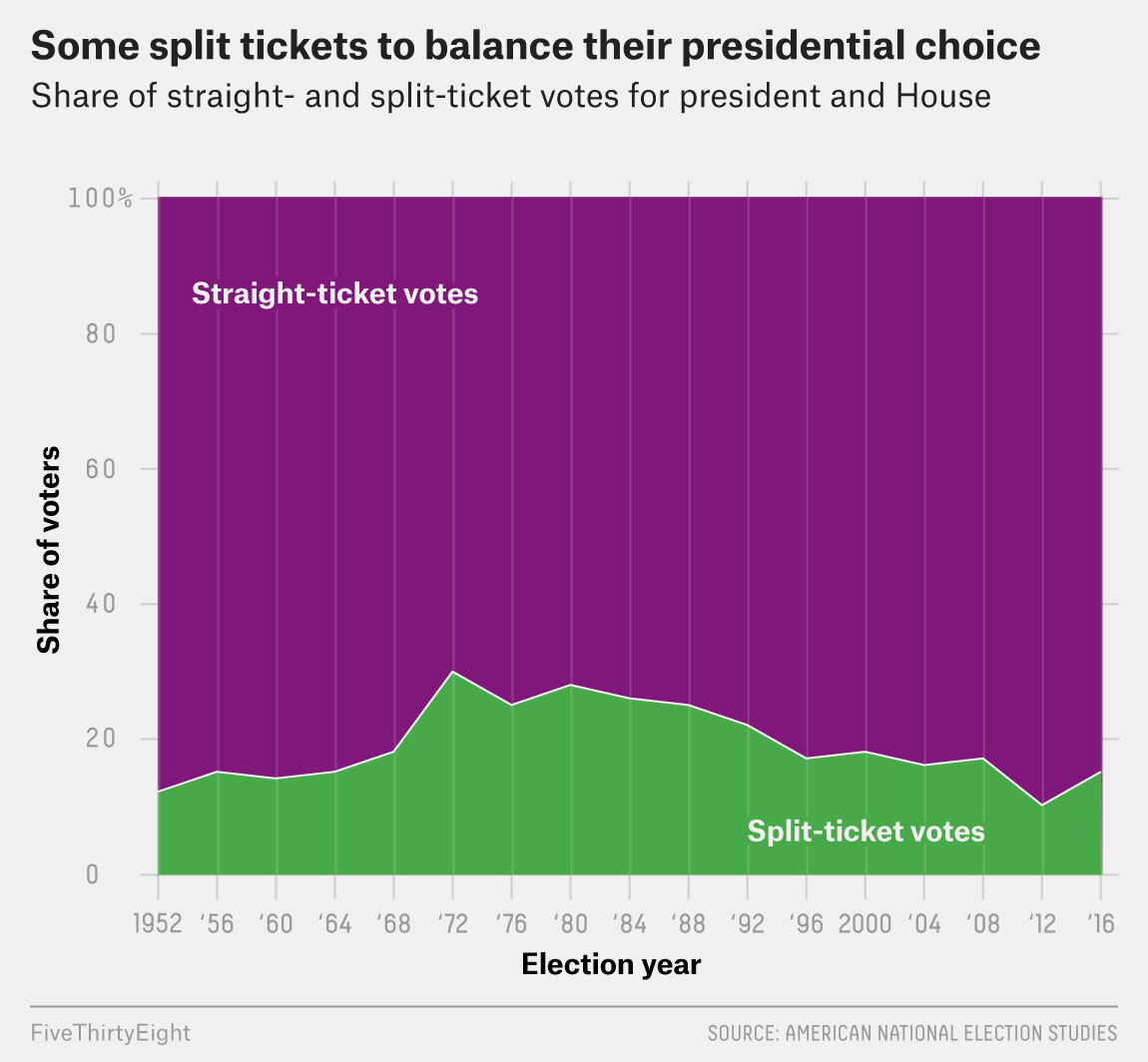 Consider the 2016 election. Some high-information voters split their tickets in Senate and House races because most signs — whether it was betting markets or election forecasts — pointed to Hillary Clinton winning the presidency. And that probably helped the GOP hold on to some districts that Clinton carried, particularly highly educated seats in the suburbs of major metropolitan areas, such as Virginia’s 10th District outside of Washington, D.C. and Minnesota’s 3rd District outside Minneapolis.

That said, there aren’t many of these “crossover” seats, or seats where the party that wins it in the House doesn’t carry it at the presidential level. The 2016 election had 35 such House seats, which was up only very slightly from 2012, when there were just 26 split results. And in the Senate, every seat went for the same party that won the state at the presidential level.

Part of the reason there aren’t more crossover seats is that the coattail effect generally plays a larger role than balancing. Erikson even told me that he didn’t think balancing was enough by itself to hinder a party with a clear lead in the presidential polls. So considering the potential upside of the coattail effect in 2020, don’t be surprised to hear Trump and former Vice President Joe Biden emphasize their ability to help their party ticket as the election campaign heats up. For instance, Biden has already begun to campaign on the idea that he can help Democrats put more Senate seats in play and protect the party’s House majority. And for their part, Republicans are already showing signs of concern that Trump’s handling of the coronavirus pandemic and the state of the economy could harm Republicans in down-ballot races and jeopardize the party’s Senate majority.

It’s unlikely that Trump or Biden’s candidacy will make up all the difference in these key races, but for some down-ballot candidates, it might not hurt to grab hold of their presidential candidate’s coattails.