That means more divided government is probably imminent, and the electoral pattern we’ve become all too familiar with — a pendulum swinging back and forth between unified control of government and divided government — is doomed to repeat, with increasingly dangerous consequences for our democracy.

It’s part of our long era of “partisan stalemate.” The question, of course, is how much longer can this last? And is there any resolution in sight?

History holds, at best, a half lesson here. This current period of partisan stalemate stands out in a few respects when we consider America’s long history with partisan conflict. For starters, the period we find ourselves in now is unique in that the national partisan balance of power is extremely close (with control of national government up for grabs in almost every cycle), even as most states and most voters are either solidly Democratic or Republican. What’s more, the national outcome often hinges on just a few swing states and districts. This period is also unique in the extent to which America is divided. Hatred toward the other party drives our politics. This produces a deeply polarizing and highly destructive form of partisan trench warfare that threatens to erode the very legitimacy of American democracy.

Nine presidential elections in a row without either party experiencing a landslide (defined as a national popular vote margin of at least 10 points), eclipsing the previous record of seven in a row (1876-1900). 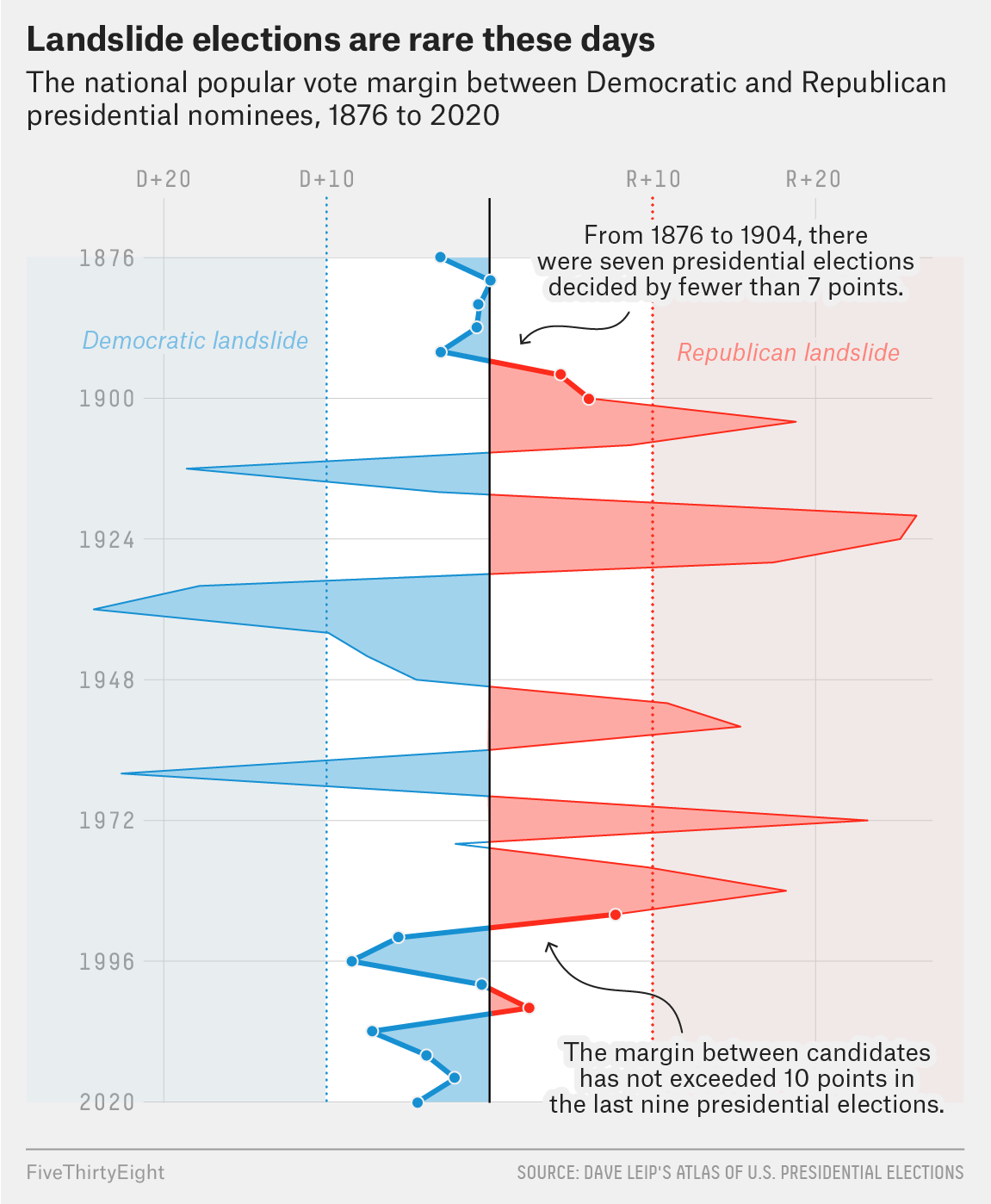 Seven presidential elections in a row where fewer than a quarter of states changed parties, well eclipsing the previous record of three in a row. 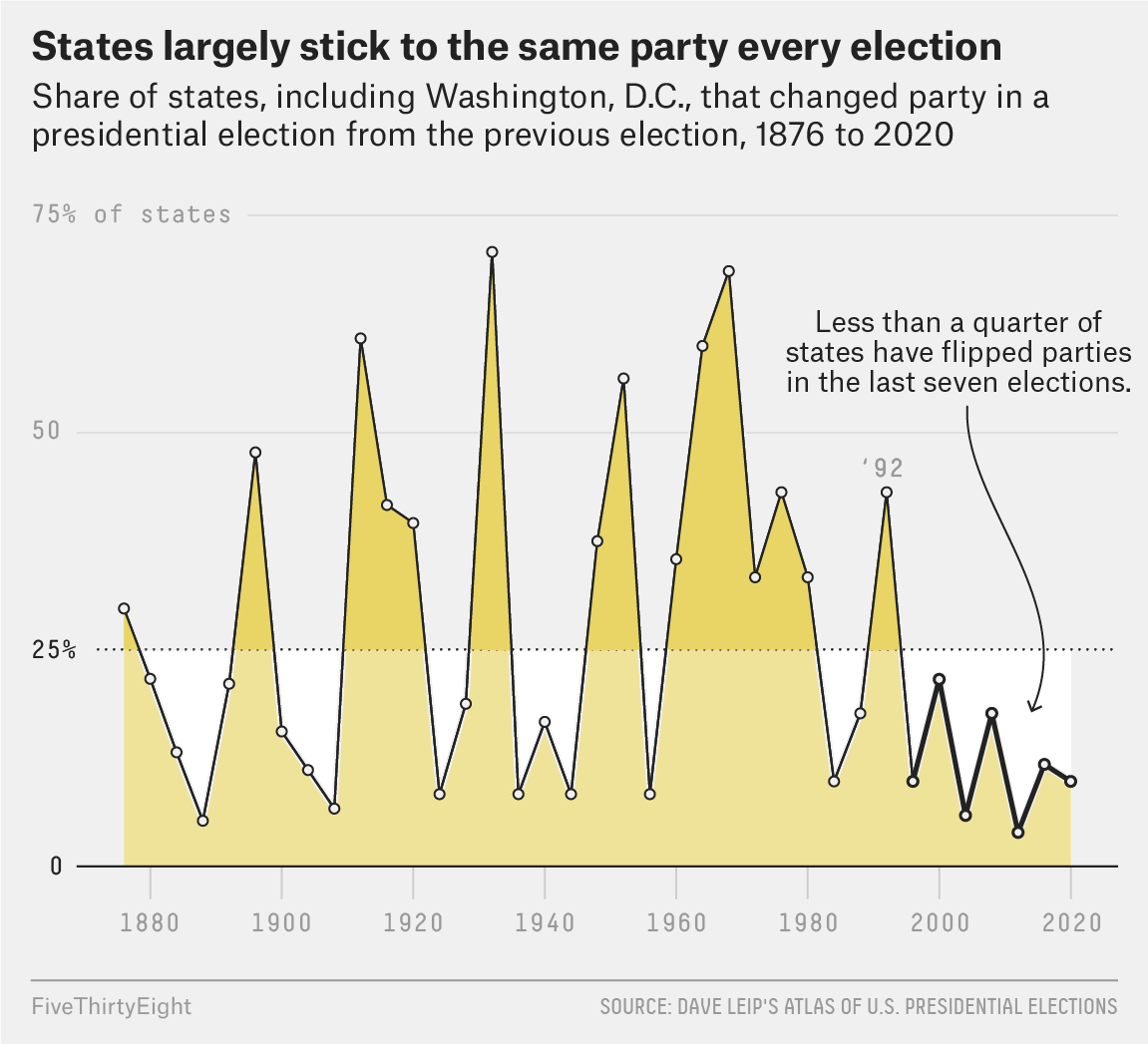 And in 11 of the last 15 elections (presidential and midterm), at least one institution in Washington (the House, the Senate or the presidency) has changed party hands. This kind of turnover is dangerous because it suggests that the parties are unwilling to work together to find compromise. And again, the last time we saw so much institutional volatility was from 1876 to 1896, when at least one institution changed partisan hands in eight out of 10 elections. 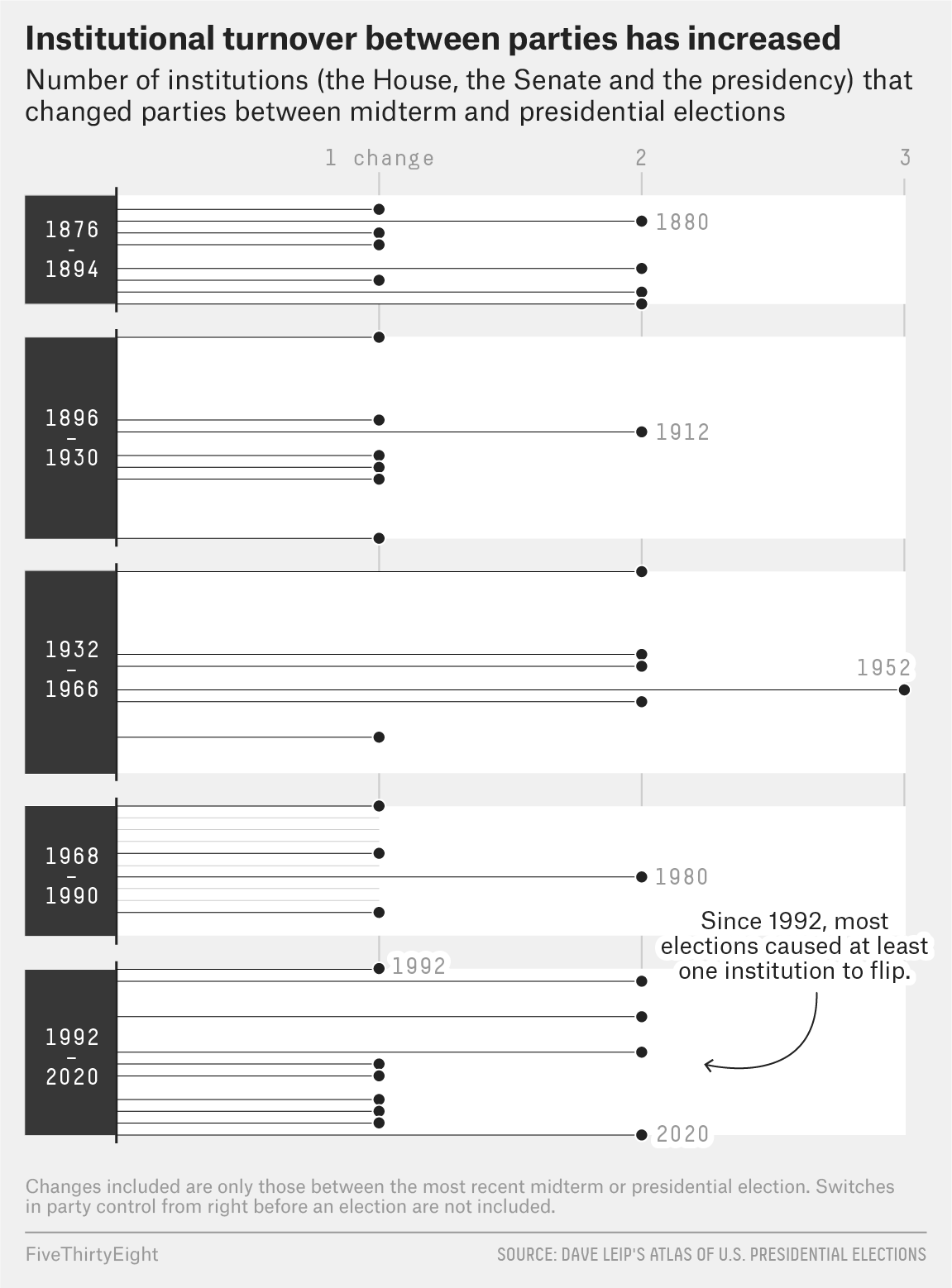 Of course, this isn’t the only time America has found itself with high levels of polarization. One other period of partisan conflict holds strong parallels to our current moment: The 20-year period between 1876 and 1896, also known as the period between the end of Reconstruction and the end of the Gilded Age. Like now, every presidential election during those years was narrow, and control frequently shifted back and forth between the two parties. Partisan loyalties were also high, both in the electorate and in Congress.

That said, there are key ways in which that period is different than today. First, the partisan loyalties on display were largely holdovers from the Civil War, i.e., the South voted solidly Democratic once the Reconstruction period ended, and the North (excluding New York, New Jersey and Connecticut) voted solidly Republican.

Additionally, the two parties didn’t actually stand for all that much — a stark contrast from today’s politics, where the major parties have distinct policies on a host of national issues. Rather, the substance of national partisan conflict largely had to do with competing tariff policy visions and how best to exploit political spoils and patronage. But this began to change as economic power concentrated in the Northeastern U.S., and hard economic times hit farmers in the Western U.S. And a new third party, the populist People’s Party, cropped up as a result. It won several Western states in the presidential election of 1892, too, which was significant as many of the newly added states in that region challenged the overall delicate balance of power.

[What Did CPAC Tell Us About The Future Of The GOP?]

But partisan allegiances during this period were getting weaker, not stronger, so the election of 1896 offered a kind of reset, as the parties’ old Civil War divides no longer mapped neatly onto the new economic ones. Democrats, split between their East Coast establishment wing and their populist Southern and Western wings, went with populist factions, nominating Williams Jennings Bryan, but they ended up losing much of their East Coast constituency as a result. The Republicans and their nominee, William McKinley, were, in turn, victorious, and with his presidency began a new period in American history.

Thus, the stalemate of that period ended, and for almost a century the patterns of partisanship in America worked very differently than they do today. For instance, after McKinley won the White House, Republicans mostly controlled the presidency until 1932. (The only Democrat to hold the White House during this period was Woodrow Wilson, whose victory was aided by former President Theodore Roosevelt running as a third party candidate after he lost the GOP nomination to incumbent William Howard Taft.)1

Yes, this period still had tense moments of partisan infighting, but partisanship was still fluid enough that the political system was flexible and responsive to shifting allegiances that cropped up. For instance, when the Great Depression hit in 1929, a large number of longtime Republicans voters were willing to vote for Democrats and kept doing so for a generation.

Periodization schemes have their limits (in reality, political change is more gradual than such clean demarcations can convey), but putting post-Reconstruction American political history into five relatively distinct periods helps illustrate just how similar our current period is to the Gilded Age — and how far removed we are from the more stable period of politics from 1896 to 1967. 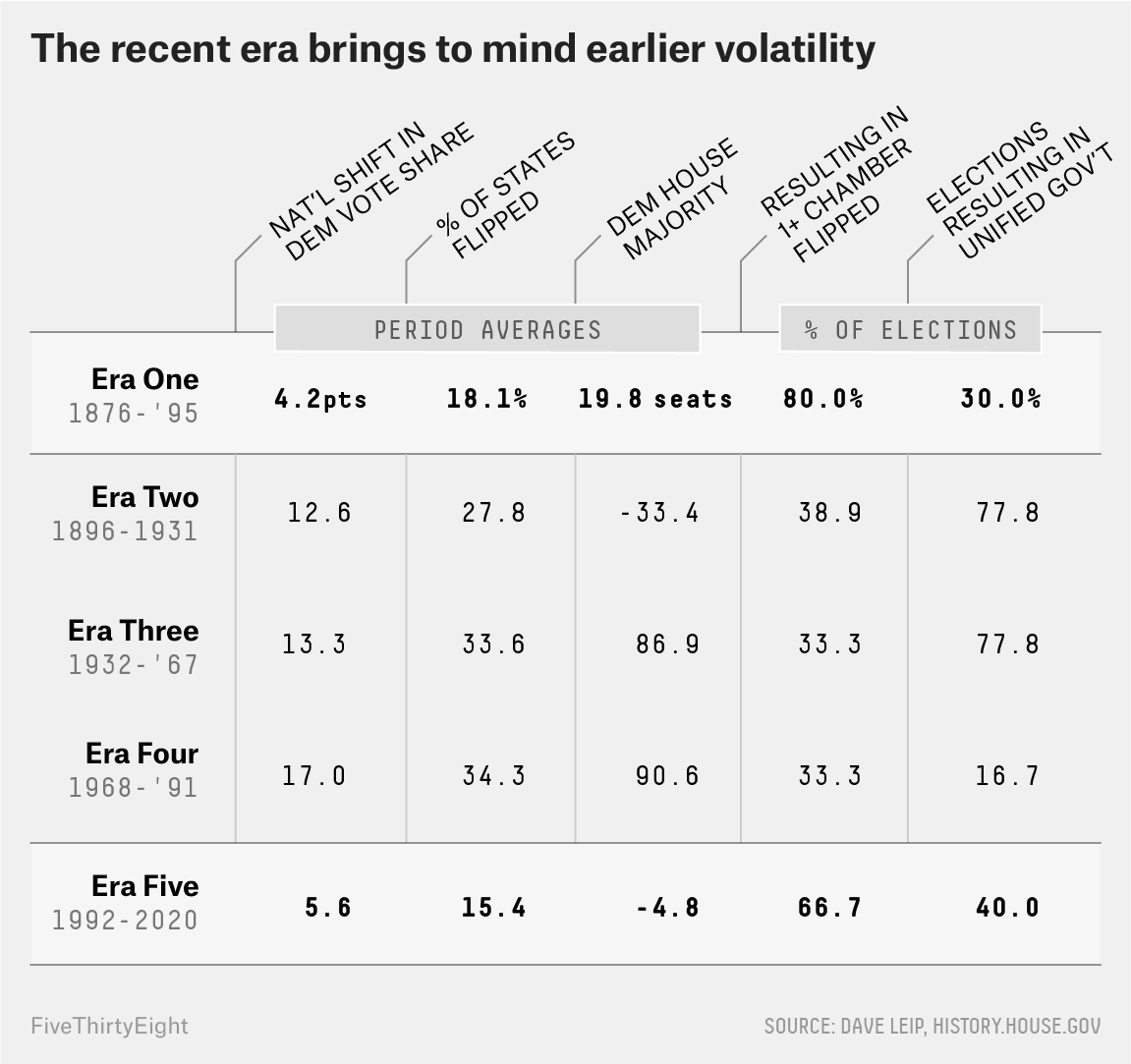 Southern conservatives had been instrumental to Democrats building a supermajority New Deal coalition in the 1930s, but they found themselves increasingly at odds with Northern liberals in the 1960s as civil rights became a national issue. And so the Democratic Party eventually broke apart, leading to a long, slow realignment that scrambled long-standing party coalitions, leaving American politics in an extended period of divided government and split-ticket voting. From 1968 to 1992, Democrats largely controlled Congress, while Republicans largely held the White House. But as party politics nationalized and became more clearly split between conservative Republicans and liberal Democrats in the 1990s, this division worsened, bringing us to our current period of unstable trench warfare.

And now the question is, how do we get out of this current stalemate? Once again, we can turn to the hyper-partisanship of the Gilded Age for clues.

The classic story of the election of 1896 was that it was a “realigning” election, so if we take this story at face value, it does suggest one path forward for American politics: another major political realignment. We just need some new issue to split one or both parties (like the famous 1896 split of the Democrats over whether currency should be pegged to silver or gold). In theory, this would shake loose old partisan allegiances and make space for a new governing coalition of interests and identities. It’s not without precedent. Up until this point, the major party realignments in American politics have all emerged when new issues cause rifts within parties and shift long-standing voter allegiances (slavery in the 1850s, the Great Depression in the 1930s, the Civil Rights movement in the 1960s and 1970s). By any indication, then, America is “due” for a major realignment.

Certainly, one can cast about for issues that could conceivably split one or both of the two major parties and cause a massive political realignment. Economics is arguably once again such an issue, given that the Republican Party’s voters are internally split over economic issues, with many of the more populist voters in the party rejecting the party’s established pro-business, pro-free trade agenda in favor of something more redistributionist. But the sticking point here seems to be that whatever latent class solidarity might exist among voters across parties, issues of race and racial identity have become so core to partisan affiliation that any potential cross-party coalition along lines of class seems unlikely.

It’s not even clear that the country’s s changing demographics will eventually pull Democrats into the clear majority. Demographics have never simply never been destiny in American politics, and Republican gains among Hispanic voters in 2020 cast doubt once again on the emerging Democratic-majority thesis, not to mention state-level efforts by the GOP to gerrymander and disenfranchise Democratic constituencies.

It’s possible that voters today are fed up with the two parties, with rising support for a third party and a growing number identifying as independent. But the problem is that independents do not represent a coherent voting bloc capable of forming a third party. There also just isn’t a lot of third-party activity, which has typically foreshadowed a new alignment in American politics — notable third party challenges in 1892, 1924, 1968 and 1992 all revealed fault lines in the existing parties, and their success signaled that large numbers of voters were truly indifferent as to which party controlled power in Washington. But today, even if voters are dissatisfied with the two parties, the vast majority see real differences in them, meaning that a large number of voters are motivated primarily by negative partisanship — or keeping the opposing party out of power. Negative partisanship is a powerful force and can keep together parties that might otherwise fracture, if the stakes of each and every election didn’t always seem so high.

So I’m not convinced a realignment is in the cards anytime soon. The comparison of our current era to the Gilded Age falls short in a number of key ways. For starters, partisanship in that period was fundamentally different. This was not a period in which the parties had many substantive national policy disagreements, as I discussed earlier. At the time, many jobs were patronage government jobs, and partisan machines operated at multiple levels of government. This sustained partisan loyalty, but as I mentioned earlier, partisan loyalties from the Civil War were also weakening — by 1896, the Civil War was a generation in the past. Finally, though partisan voting was consistent from election to election from 1876 to 1896, fewer states voted strictly Democratic or Republican, thus creating more possibilities for Democrats or Republicans to achieve at least some level of national dominance with modest state-level shifts, which lifted Republicans to national dominance following the election of 1896.

Rather, the simple lesson from history might be this: Our current extended period of closely contested national elections atop stable and persistently uncontested state and local elections is truly unprecedented.

The last time we encountered anything similar, American party politics were substantively different and the precursors of impending realignment far clearer. But today, the factors locking in continued closely-balanced hyper-partisan politics are much stronger. And absent a major change to the rules of our elections, no realignment lies in sight. Instead, deepening partisan trench warfare will only worsen fights over the basic rules of voting, undermining the shared legitimacy of elections on which democracy depends.

Women of color have always been in politics. Now they are changing Congress

Lee Drutman is a senior fellow in the Political Reform program at New America. He’s the author of the book, “Breaking the Two-Party Doom Loop: The Case for Multiparty Democracy in America.” @leedrutman