The headlines Wednesday said Prime Minister Benjamin Netanyahu swept to a surprising and convincing victory in the Israeli election Tuesday after his Likud party won at least five more seats in parliament than its chief rival. But the victory wasn’t really that overwhelming because of the subtle nature of the surprise.

The reality is that Likud won only a quarter of the Knesset’s 120 seats and along with its closest allies won about as many seats as most pre-election polls indicated. That’s because even while Likud gained seats relative to the last pre-election polls, other right-wing parties most closely aligned with his own won fewer than polls predicted — perhaps because their voters switched to Likud.

This shift among the right-wing parties seemed like such a big surprise because the last pre-election polls, by law, were based on responses five days before the election. Those showed Likud trailing Zionist Union, its chief rival, in the race for a plurality. The jolt was compounded Tuesday evening in Israel when exit polls appeared to show the parties neck and neck. It turned out that the exit polls hadn’t picked up all the changes: Likud appears to have won 30 seats, to Zionist Union’s 24. Zionist Union won about as many seats as expected; Likud won a whole lot more.

The news wasn’t all good for the right-wing bloc, however, in part because of a quirk in Israel’s electoral rules that magnifies small differences in vote counts. A year ago, the Knesset raised the threshold for parties to get seats to 3.25 percent of the vote, up from 2 percent. Otzma-Yahad, a religious, right-wing party whose leader was likely to join forces with Netanyahu, won only about 3 percent of the vote. So instead of winning three or four seats, as it would have under the previous threshold, it won none. Meretz, a left-wing party that opposes Netanyahu, cleared the threshold by about six-tenths of a percentage point, picking up four seats.

If just a minuscule percentage of voters had decided differently, Netanyahu could have commanded more seats. If Yahad, for example, had gained about 12,000 more votes out of about 4 million cast and Meretz 25,000 fewer than it did, Yahad would be in the Knesset and Meretz would be shut out. Instead, Netanyahu’s coalition is about where pre-election forecasts expected it to be: around 37 or 38 solid seats, with an additional 18 seats won by religious parties likely to back him, and needing help elsewhere to form a government — probably from the center-right Kulanu party, formed just four months ago as a spinoff from Likud.

In fact, Likud’s head-to-head win over Zionist Union will matter mainly if it turns out to have convinced Kulanu to join its coalition. Netanyahu appears to think it will, based on his confident statement hours after polls closed that he would work “quickly and responsibly to form a new government.”

“Likud gained votes by convincing right-wing voters they need to make a strategic vote for Likud at the expense of voting against their ideology,” Jeremy Saltan, chairman of Bayit Yehudi’s English-speaking wing and an election forecaster, said in an email interview Wednesday. “The strategic vote argument actually worked better than anything the prime minister actually said or did.”

He cited on his blog unspecified, unpublished internal campaign polling that was conducted after the blackout on public polls and that showed Likud gaining at the expense of Bayit Yehudi. In the email interview, he said there were multiple internal polls, most of them conducted Sunday, two days before the election. He declined to say which campaign or campaigns they came from.

Take second-hand accounts of unpublished polls, add speculation, and you’re about as close as we can come now to knowing why Israelis voted as they did. That’s because exit polls don’t tell us. Unlike in the U.S., where pollsters ask voters a wide range of questions about who they are and why they voted as they did just after they leave the polls, Israeli voters simply say which party they backed, according to Saltan. We’ll have to wait a few days for post-election polls to ask deeper questions.

Even judged by how well they accomplished that limited goal, the exit polls fared badly. Those from Channels 1, 2 and 10 each showed Zionist Union with between two and three seats more than it won and Likud with between two and three seats fewer than it won. Like all polls, exit polls have a statistical margin of error, but their systematic miss in the same direction suggests a deeper problem.

Pollsters told Israeli radio stations that they blamed their misses on Likud voters disproportionately opting not to participate in the exit polls, according to Reuters. (This phenomenon also has been observed in pre-election polling among conservative voters in the U.K. Meanwhile, U.S. exit polls have a lousy track record of predicting election results.) Without respondents’ demographic and party-affiliation information, pollsters can’t easily weight the numbers to adjust for this effect.

Exit pollsters also closed up shop two hours before voting ended, meaning they missed about one in 12 voters. If those late voters were particularly likely to back Netanyahu — including some perhaps spurred by a video he released earlier Tuesday calling on supporters to counter a big Israeli Arab voter turnout — then the exit polls would underestimate Likud support.

Israeli pollsters may need to rethink how they do exit polls. It’s harder to blame them for their pre-election work having missed Likud’s surge. Saltan pointed out that despite the disadvantage of having to stop polling early, the pre-election polls came close to nailing the results for parties outside the core right-wing bloc. We published Monday a local regression of polls in 2015, and it came within one seat of the correct count for each party outside the three core right-wing ones. 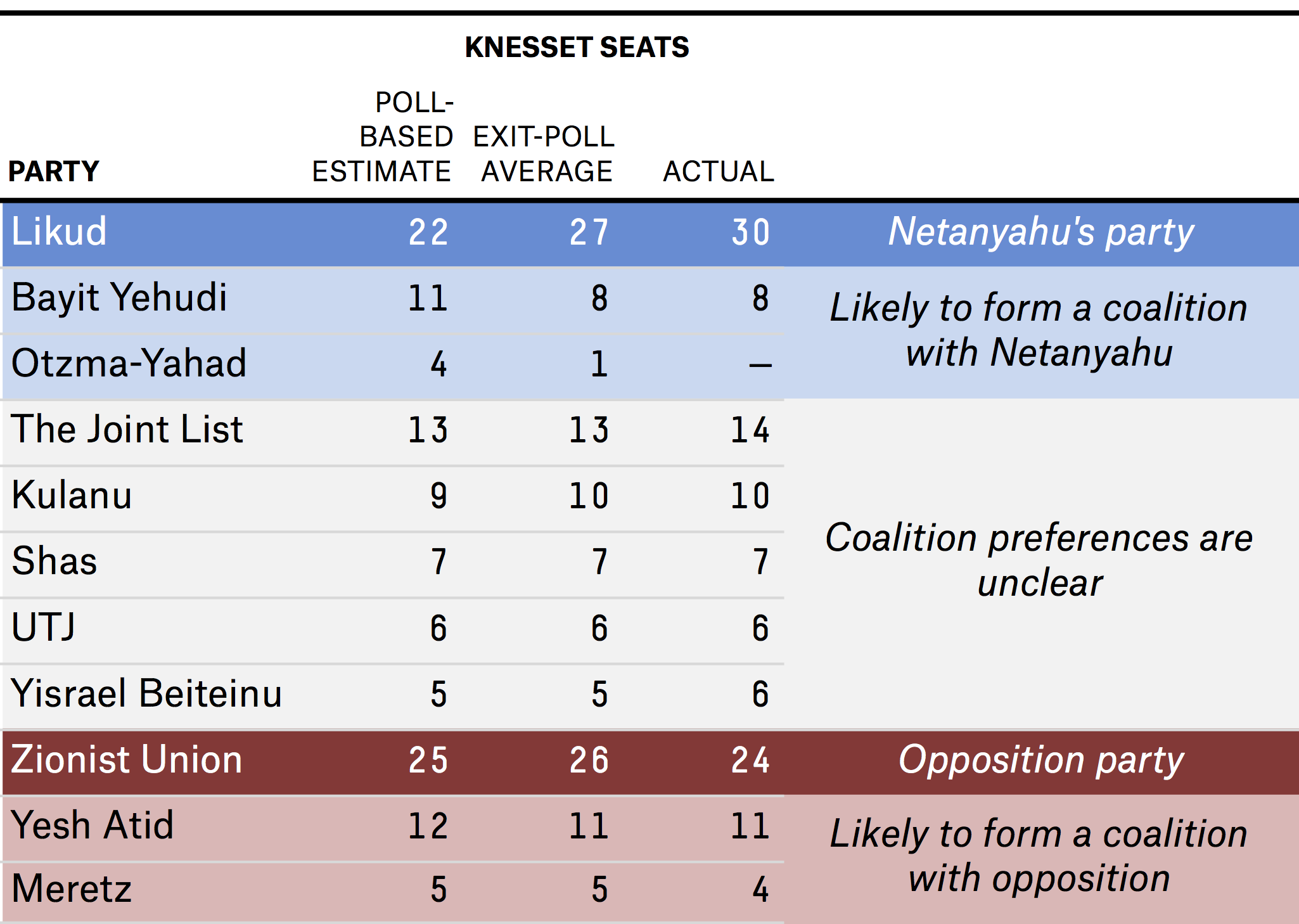 “Polls were highly accurate on everything but the segments of the right bloc,” election forecaster Nehemia Gershuni-Aylho said in an email interview. “It’s impossible to forecast a multiparty divided system. Once you publish the poll, the whole system turns.” In other words, the polls themselves, by showing Likud trailing in the bid to win a plurality, might have pushed right-wing voters toward Likud.

Saltan says this kind of poll-watching was the inspiration for the poll blackout in the first place. “The law is in place because Israelis are heavily influenced by the polls,” he said. “I don’t see them changing it anytime soon.”

Other forecasters were less forgiving of pollsters’ pre-election work. Before the results were in, Yitzhak Sapir, a software engineer and entrepreneur who projected the election at his website, wrote in a comment on our website that pollsters often don’t disclose important details of their methodology.

The anonymous theoretical physicist who is one of the two election forecasters at the site Batelbe60 was also critical of pollsters, pointing out in an email interview that the pre-election polls hadn’t picked up any trend toward Netanyahu before the blackout set in. “There was a fundamental problem in the polls,” the writer said.

“Israel is a difficult country to poll,” the physicist added, pointing out that the nation of 8 million had just a half-dozen major pollsters on this race and that they get to test themselves only in national campaigns every two to four years. “In general, I think the public will be much more cautious next time about election polls (they were always wrong, but never this much),” the physicist said. “Sometimes you have no choice but to lean back and wait.”