There are two phases to the Israeli election that starts Tuesday. The first: electing some politicians. That’s the relatively easy part to forecast. The second: Figuring out who’s going to govern with whom.

That is what’s really hard to predict.

In the first phase, no party is likely to win a majority of the 120 seats in the Knesset, the country’s parliament. But the two main parties are still jostling to hold the most seats. Likud, the party of Prime Minister Benjamin Netanyahu, is in a tight race for the most seats against the Zionist Union, the center-left leading opposition party.

Based on a local regression of polls since January, it looks like the Zionist Union will win the most seats: about 25, to Likud’s 22. In the following table, we’ve placed confidence intervals around the individual party estimates1 based on poll performance in the prior two elections. 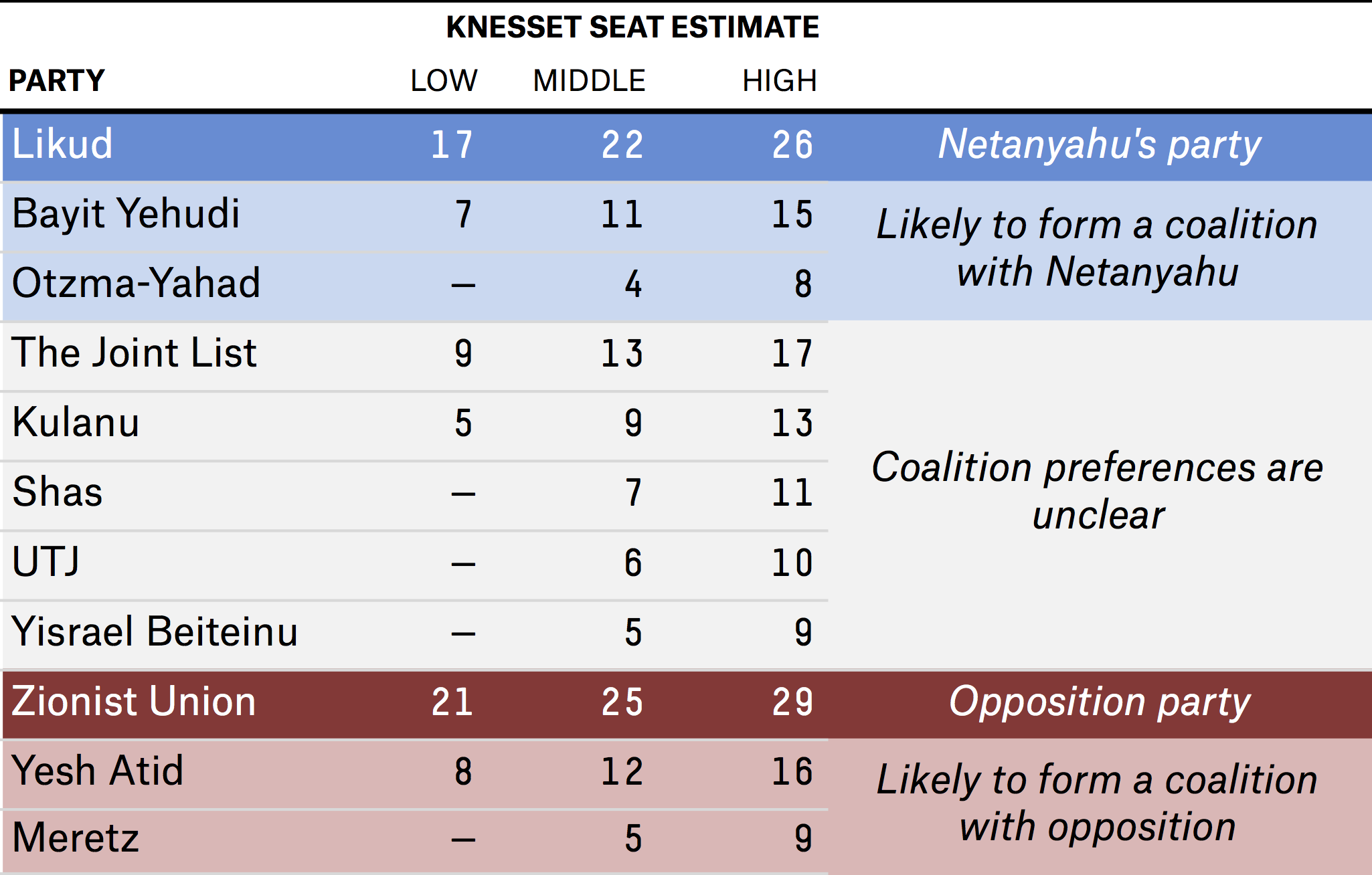 Predicting the voting may be the easier part, but it’s not easy. This year, Israeli law restricted polling as of the Thursday before the election, and no pollster could release results of new polls after Friday. That leaves any shifts in public opinion that occurs over the weekend in pollsters’ blind spot, especially because some parties and candidates save big ammunition for the final days before balloting. Just before the 2013 election, a video emerged in which a candidate for Bayit Yehudi, a right-wing religious party whose name means Jewish Home, speaks about the prospect of the mosque on Jerusalem’s Temple Mount being blown up. (Some people interpreted the remarks as support for the idea.) The resulting furor over what the candidate called a joke cost the party seats — including that candidate’s.

The major potentially vote-shifting news Monday was Netanyahu’s pledge to oppose establishment of a Palestinian state.

Israeli pollsters have had large misses in previous general elections. In 2013, for instance, the centrist, secular Yesh Atid party never polled above 13 seats but won 19. With 11 parties likely to win seats Tuesday, there’s a good chance that at least one will fall outside of our 95 percent confidence range. Likud might even win a plurality.

Since no party will come anywhere near a majority in the first phase, party leaders will choose whom to back for government leader. In the table above, we have color-coded the parties that most forecasters agree will back Netanyahu in blue and those that probably will back his opposition in red. The parties that are toughest to call are in white. The anti-Netanyahu bloc is closer to a 61-seat majority than Netanyahu is.

But Israelis might not know even by the next week or month who their prime minister is, said Jeremy Saltan, a 31-year-old political insider and commentator who has become a leading poll analyst and election forecaster. (He’s also a comedian and comedy-club owner.)

Even in 2013, when Netanyahu was the clear front-runner, nearly two months elapsed between the January vote and the formation of a coalition government. “It’s very complicated,” Saltan said in a telephone interview. Saltan and other election analysts in Israel who have been watching every poll for months generally are loath to predict exactly how coalition building will go.

Saltan’s projection of the anti-Netanyahu bloc — the Zionist Union, Yesh Atid, the Joint (Arab) List alliance of Arab-dominated parties, and left-wing Meretz, which together only total 55 seats by our estimate — consists of parties that aren’t all united behind Zionist Union candidate Isaac Herzog. “There are three other [parties] besides Herzog’s party, and each one brings problems where it’s hard to go ahead and create a situation that brings everyone in,” Saltan said.

In his final forecast, Saltan outlined scenarios in which either Netanyahu or Herzog build governing coalitions. The swing vote, in his analysis, could come from Kulanu, a party characterized by its progressive economic ideology.

Forecasts don’t all agree on how the parties will line up. While Saltan counts four parties that have ruled out sitting with Netanyahu, election forecaster Nehemia Gershuni-Aylho said in an email interview that he counts only two: Joint (Arab) List and Meretz.

Meanwhile, the pair of anonymous analysts behind the forecasting site Batelbe602 divide parties into three blocs — right, left and centrist-religious — and let users drag and drop parties into their own imagined coalitions. It’s a trade machine for the political set.

One of the Batelbe60 writers, a theoretical physicist, said in an email that if the model is right and Herzog’s party is gaining, “public opinion and the press will surely put a lot of pressure on the other party leaders and above all on the president to give [Herzog] the first chance to form a coalition.” In their post after the final polls, the Batelbe60 writers said: “Predicting elections more often leaves question marks than exclamation marks.”

Saltan is pulling for the right wing in his role as chairman of Bayit Yehudi’s English Forum, an initiative to appeal to English-speaking voters. The party is likely to throw its weight behind Netanyahu, and Saltan in his political career has always aligned with the right, he said. But Saltan, who was born in Chicago, added that he kept his political ideology separate from his poll analysis. “I think that I do a pretty good job of keeping it pretty neutral,” he said. “When you’re talking about math and science, it’s pretty hard to get politics into that.”

Gershuni-Aylho, like Saltan, said his personal politics are on the right side of the spectrum. Asked if his politics play into his forecasts, he replied: “Hell no.”

The physicist at Batelbe60 declined to disclose the political views held by the pair behind the site and said they do not let their political positions influence their work “in any shape or form.”

Phase two will get even more difficult to predict if it turns out that the polls missed phase one badly. The polls are stale enough to leave room for a major change before Tuesday, which could shift parties’ power heading into coalition negotiations.

The polls could be flawed in addition to outdated. Saltan said that private campaign polling in Israel tends to be better than the publicly released polling, which can vary widely by how people are polled — by landline, cellphone or Internet. Relying too much on any method risks missing parts of the electorate. Batelbe60 has identified what looks like “herding” in the Israeli polls, a phenomenon we’ve spotted in U.S. electoral polls. The polls nonetheless did pretty well in the last two elections. In 2013, Saltan’s model predicted seat counts within one seat of the correct number for most parties.

Saltan isn’t promising great things from his predictions. “It’s not going to be accurate — there are way too many variables,” he said, adding: “And, look, I’m no Nate Silver, right?”