You may have doubts, as some readers did, about whether Google searches are a reliable way to predict that an NHL expansion team would struggle in Las Vegas. But it’s actually a pretty good way to forecast this kind of thing, and there’s another way to prove it:

It turns out that there’s a strong relationship between Google searches and an NHL team’s bottom line. How often fans are Googling the term “NHL” in a metro area reliably predicts how much they’re spending on hockey tickets.

In the chart below, I’ve estimated how much fans spent on tickets at each NHL arena during the past regular season. The process is simple: I just took total home attendance and multiplied it by the average ticket price.1 Then I compared ticket spending against the estimated number of NHL fans in each market based on Google search traffic.2 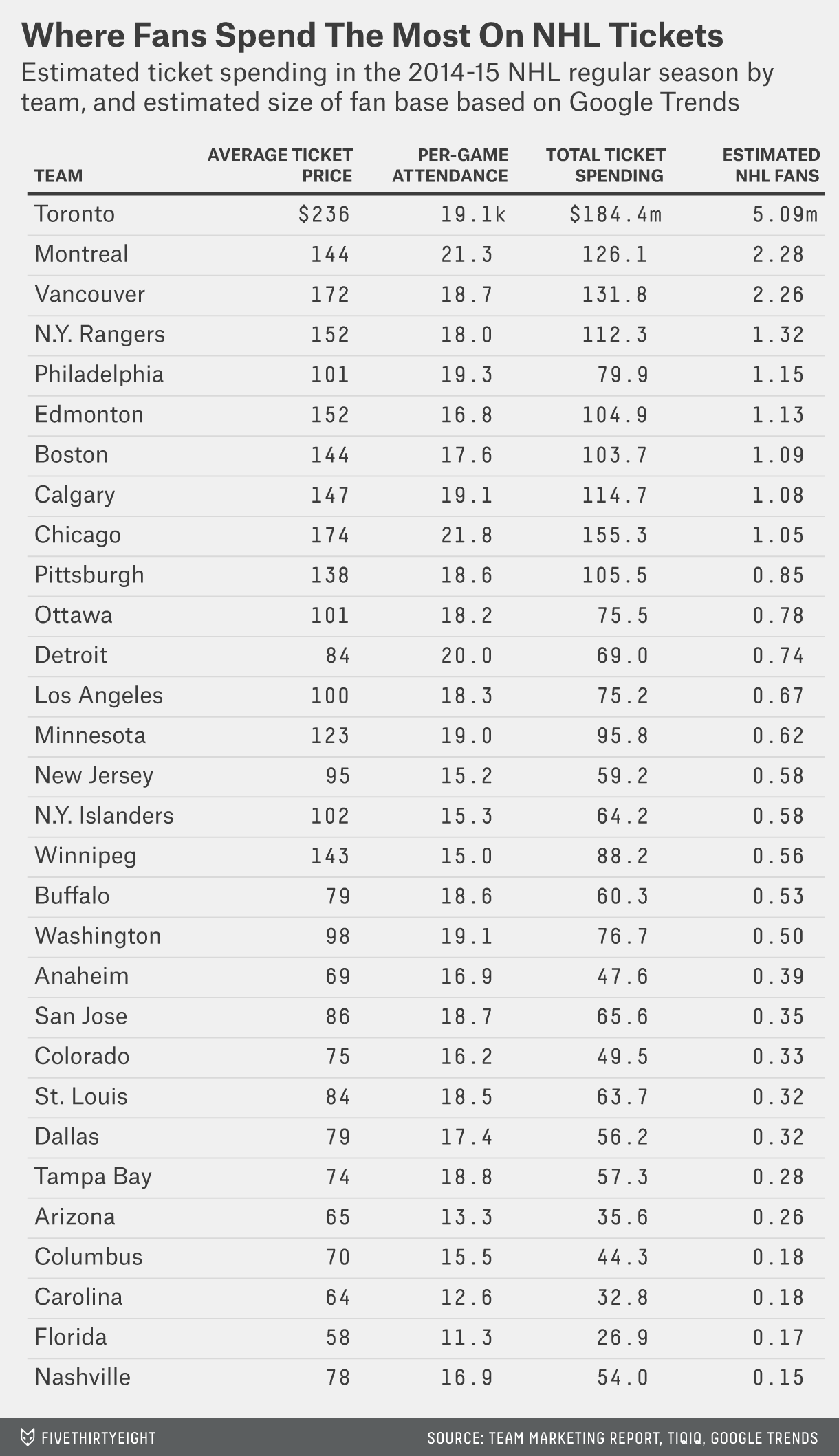 As you can see, there’s a strong correlation. Nine of the 10 most popular teams based on Google searches also ranked in the top 10 in ticket sales this season, the exception being the Philadelphia Flyers.

Further, there are huge differences in ticket sales between the top and bottom teams. Whereas fans spent only $27 million on Florida Panthers tickets this season, they shelled out more than $184 million (in U.S. dollars) to see the Toronto Maple Leafs play.

Most of the differences are based on discrepancies in ticket prices rather than attendance. The NHL is a terrific live-spectator experience — I say this as someone who spends way too much on Rangers tickets — and most NHL teams can sell out their arenas if they charge the right price. But the right price varies. Whereas the average ticket cost $236 in Toronto, it was $74 in Tampa.

The relationship is even clearer if we chart the data: 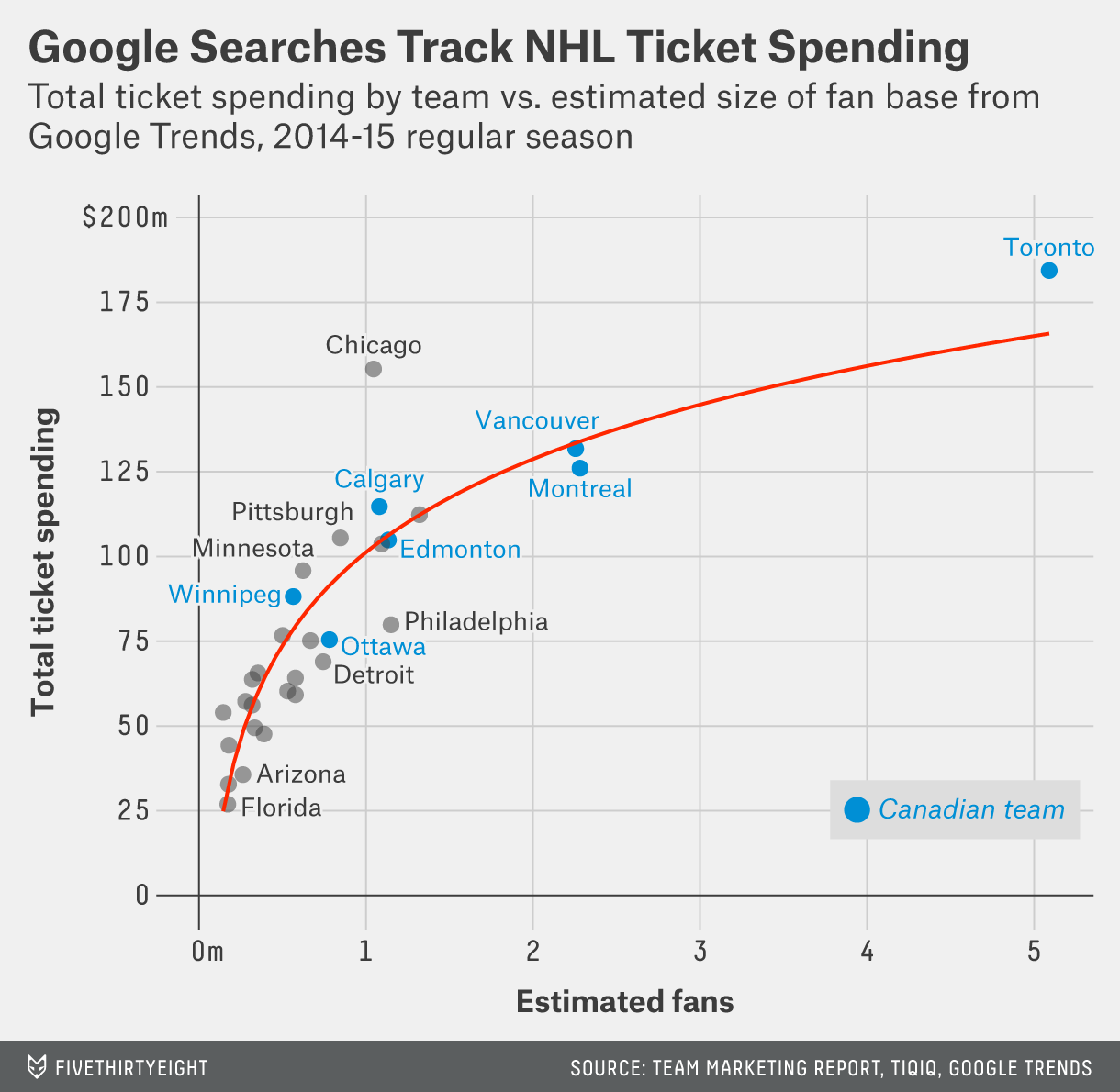 You’ll notice that there are some diminishing returns to having more fans in your area.3 Perhaps this is because there are only so many good seats available for each game or because larger markets like Toronto and New York have more non-hockey substitutes for the fan’s entertainment dollar.

Still, the correlation is clear, and very strong. The size of the fan base, based on Google searches, accounts for 81 percent of the differences in ticket sales.4

You could undoubtedly do a bit better still by accounting for other factors, like how well the team has played recently. The on-ice success of the Chicago Blackhawks may explain why they do so well at the box office, for instance.

But there aren’t a lot of exceptions, and there aren’t a lot of favorable precedents for a hockey team in Las Vegas. The Nashville Predators are a comparative success story — they’re a very good team that’s made some inroads in a highly non-traditional hockey market. And yet, while the Preds are usually selling out their rink, fans are paying comparatively little for tickets. So Nashville ranked just 24th in NHL ticket spending this year, and the Predators have barely been breaking even financially.

Several other teams in non-traditional hockey markets — the Arizona Coyotes and Florida Panthers, for instance — are losing money. And most of them play in metro areas with considerably larger populations than Las Vegas.

When should you be skeptical of Google Trends data? Sometimes ambiguities of language can cause problems. (Do you mean Kenny Rogers the singer or Kenny Rogers the pitcher?) And as the complexity of the analysis increases, so can the potential for error. It proved to be more difficult than Google expected to determine which searches predicted flu outbreaks, for example — although that was more an issue of flawed analysis than faulty data.

In this case, though, Google is just stating the obvious: Putting an NHL team in a small market in the middle of the desert isn’t a good gamble.