Plenty of us will start the year with good intentions. When a Marist Poll asked 1,140 U.S. adults in December whether they would be making a resolution for 2015, 44 percent said they were either very or somewhat likely to do so. But nearly half of them are likely to fail in sticking to their plans.

John Norcross, a professor of psychology at the University of Scranton, has conducted studies into “resolvers” (those of you who have made a statement about what you intend to do differently in the new year) and “nonresolvers” (those of you who haven’t). In a 2002 study, Norcross and his colleagues contacted resolvers every couple of weeks for six months to check in on how they were doing. By the end of June, only 46 percent were on course with their New Year’s resolutions.

It seems crazy to me to stick a simple percentage on objectives that are so affected by circumstances and ambition at the outset. Let’s say that I vowed on Jan. 1, 1995, to stop stealing my sister’s homework and grading it myself. My chances of success were far higher than if I were to promise myself that I would master Mandarin that year (not least because by February my sister might have learned to better hide her stuff).

Surprisingly, neither of those aspirations appear on the Marist survey about Americans’ New Year’s resolutions. But we can break down the idea of a “resolution” and look at specific goals people set for themselves — and their chances of success. 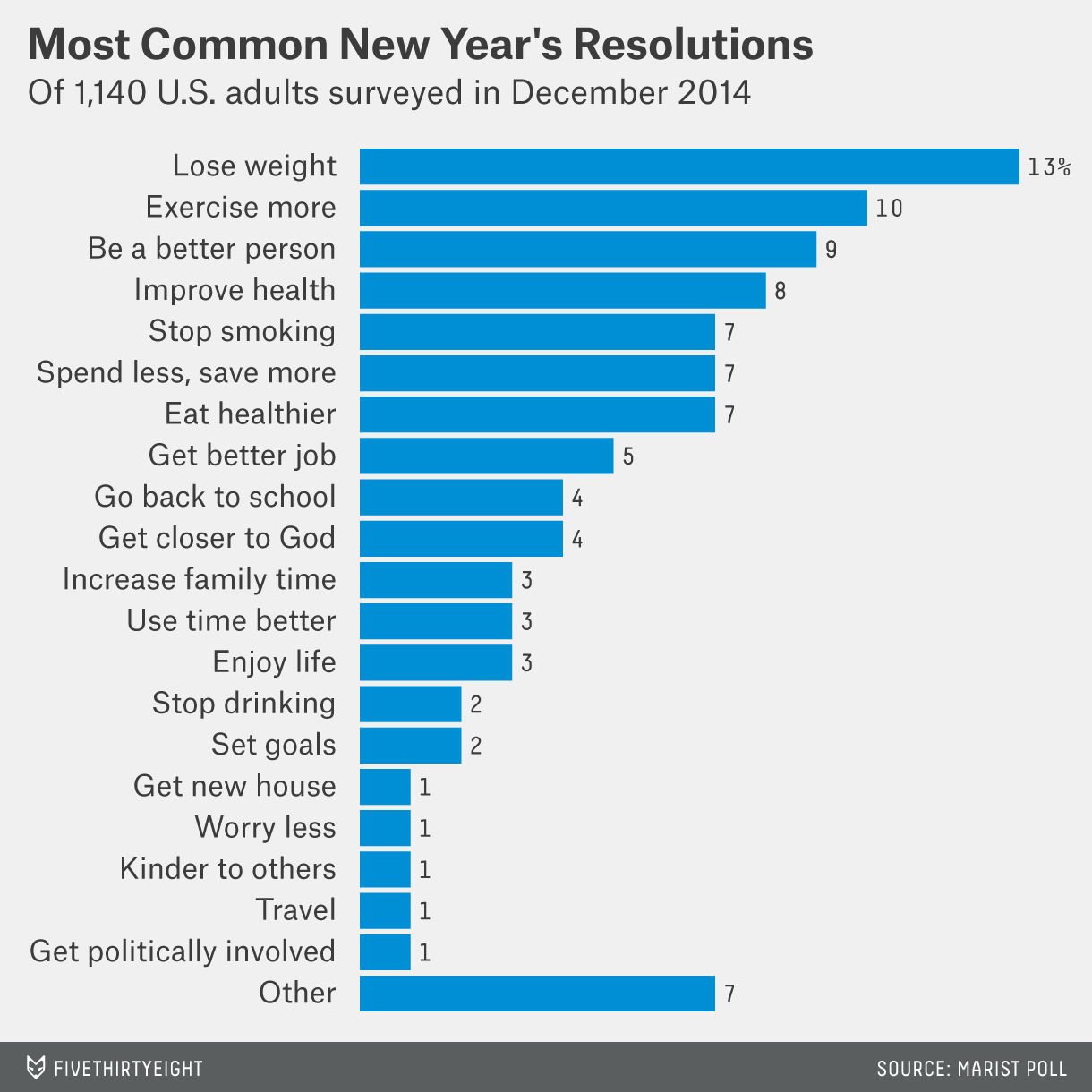 Here, too, ambitions matter — and they seem to be pretty high. A Gallup survey of 828 adults in November found that, on average, men said they would like to lose 11 pounds, while women said their ideal weight was 20 pounds lighter.

One way people “seriously try” is by going on a diet. As my colleague Emily Oster explained in October, the diet you choose can affect how much weight you successfully lose. A meta analysis by the Journal of the American Medical Association (JAMA) looked at the average weight of participants who took on a specific diet and compared them to those who didn’t. It found that after six months, the Atkins diet resulted in the highest average weight loss (22.3 pounds).

Even for those who do manage to lose weight, success can be short-lived. That same JAMA research found that after one year, those on the Atkins diet had regained eight of the pounds they had lost. A separate 2010 study of 1,869 overweight and obese individuals found that almost a third were able to lose 5 percent or more of their bodyweight. Among those individuals, 34 percent were able to maintain at least 75 percent of their weight loss over the next five years.

According to the International Health, Racquet & Sportsclub Association (IHRSA), a trade group, 12 percent of new gym members join in January. That would seem to suggest that some people are acting on those new year’s resolutions. But it doesn’t necessarily mean they’re sticking to them. A 2009 study in the International Journal of Sport and Exercise Psychology found that 50 percent of those who start an exercise program will drop out within the first six months. That might be explained by decision fatigue, a theory that posits that the mere act of deciding to join a gym leaves us too exhausted to actually go there.

‘Be a better person’

What does this even mean? Sorry guys, you’re on your own here — no stats in the world are going to measure this one.

Overall then, success rates aren’t looking so great. Despite that, reviewing our past resolutions doesn’t seem to deter us from making new ones. That Marist poll I mentioned has been conducted since 1995, and the percentage of adults saying they will probably make a resolution hasn’t changed much — nor has the percentage who say they weren’t able to keep the resolution they made the year before. 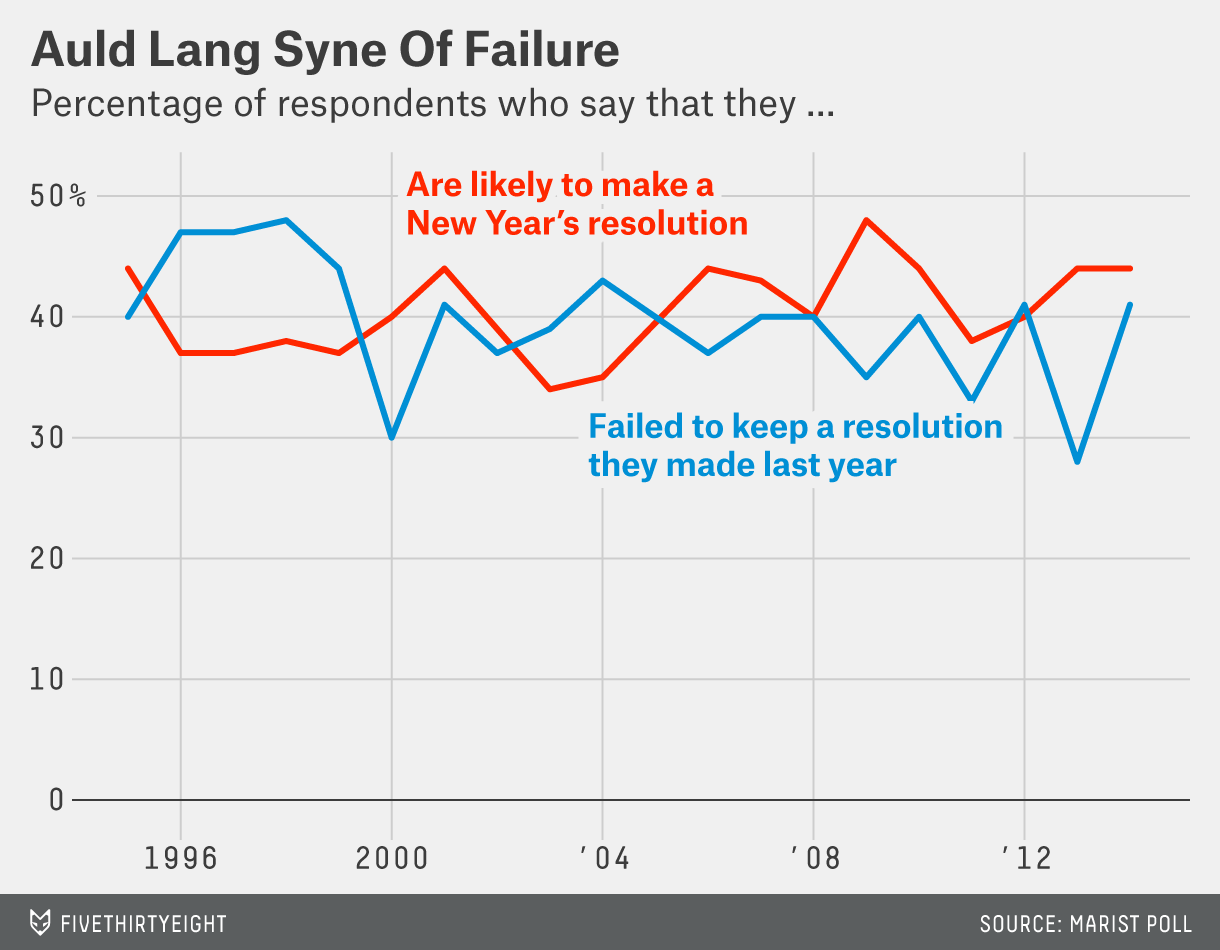 We can also see just how consistent that cycle is in Web search data. Like clockwork, each January well-intentioned people type the word “diet” or “gym” into Google. By December, the numbers doing so have fallen by a third. 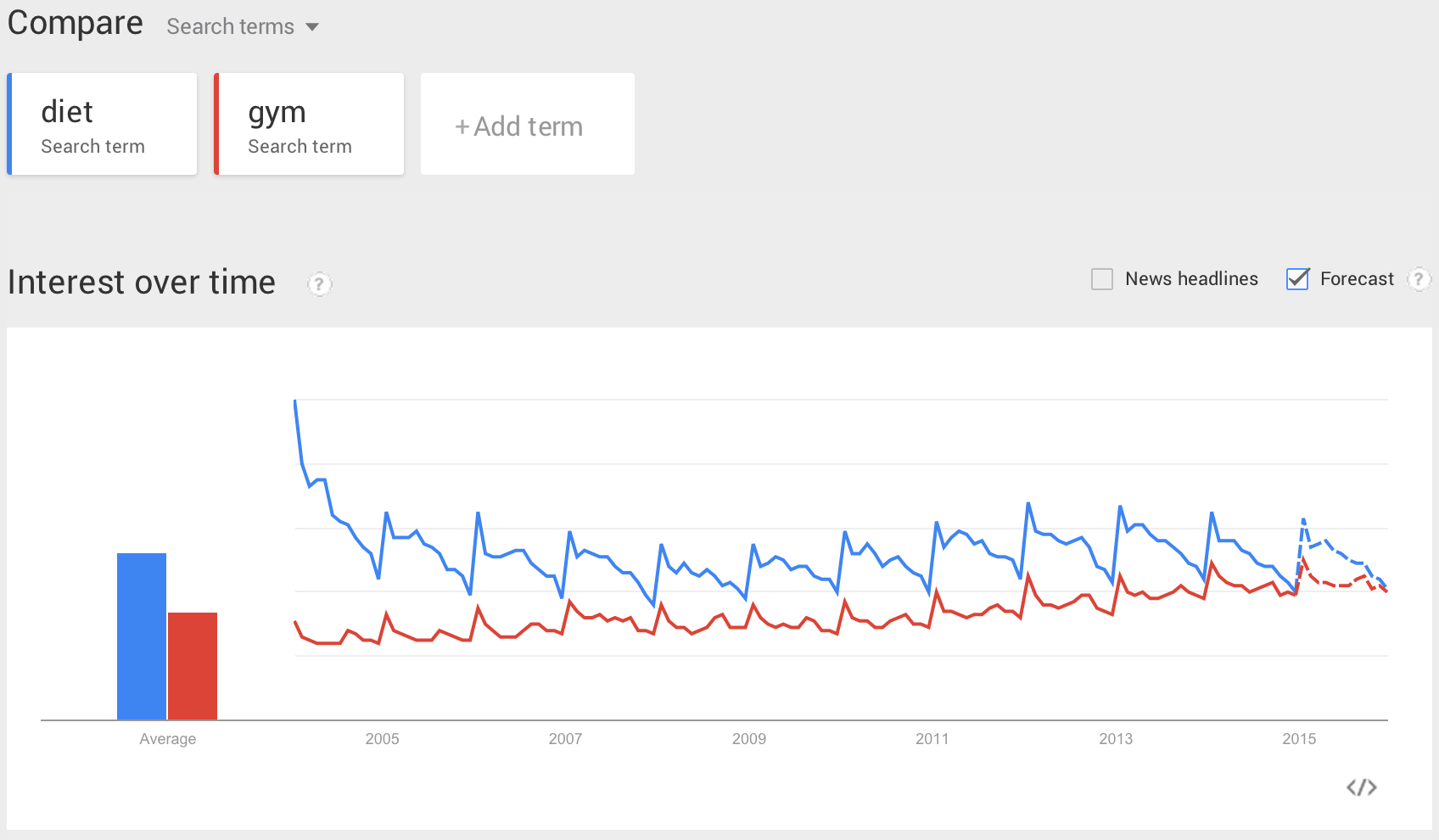 If at first you don’t succeed, try, try next January.