In fact, it can sometimes seem like there are as many ways to lose weight as there are people trying to lose it — whether with named diets (Atkins, South Beach, Zone, Weight Watchers), generic diets (low fat, low carb, paleo) or fad diets (grapefruits, cabbage soup). In a very broad sense, these all work the same way: They decrease caloric intake, which causes weight loss. More narrowly, some diets make claims about the physiological mechanisms that make one approach preferable to another.

In the end, this isn’t a question for theory, it’s a question for data. The simplest way to figure it out would be to do head-to-head comparisons of all possible diets in large randomized trials. That is, take a group of people who want to lose weight, randomly assign half of them to Atkins and half to South Beach, say, and compare the weight loss in the two groups. Do that again and again and again for all possible diet comparisons, and you’d have your results.

This is rarely done, however. Much more common are randomized trials that compare a single diet to no diet. The reason is pretty simple: Companies selling the diets are funding many of these studies, and thus a major goal of the research is to show that the diet works. A company will find larger weight-loss effects if it compares its diet to no diet than to another diet.

But all is not lost. A recent review paper in The Journal of the American Medical Association does exactly what we want: It reports head-to-head comparisons of different types of diets, and even individual named diets. The researchers use the available studies — which typically compare each diet to no diet — to draw conclusions about how diets compare to one another.

The studies in the JAMA analysis mostly have a similar structure: People enroll and are randomly assigned to either no diet or the particular diet being studied. The studies go on for varying periods of time — commonly six months to a year — with the diet group told to adhere to the diet over the period. Of course, it goes without saying that not everyone does. Researchers are not forcing people to diet, so not all of the participants do it comprehensively.

The authors start by comparing diet categories. They classify any named diets into groups: “low carb” (Atkins, South Beach), “low fat” (Ornish, Rosemary Conley) or “moderate macronutrients” (Jenny Craig, Weight Watchers). Low-carb diets limit carbohydrate intake and increase the share of a person’s diet that comes from proteins and fats. Low-fat diets limit fat intake and increase the share from carbohydrates and proteins. Diets the researchers call “moderate macronutrients” are in the middle; they typically keep the shares of each food group about the same while limiting overall calories. The researchers also include a category of lifestyle intervention, which involves encouraging exercise and better nutrition in a general way. They then compare the subjects’ weight loss after six months and after a year.

Interestingly, the “moderate macronutrient” diets do worse. The weight loss for this group at a year is only about 12 pounds.

It’s also interesting to compare the named diets, as in the charts below. 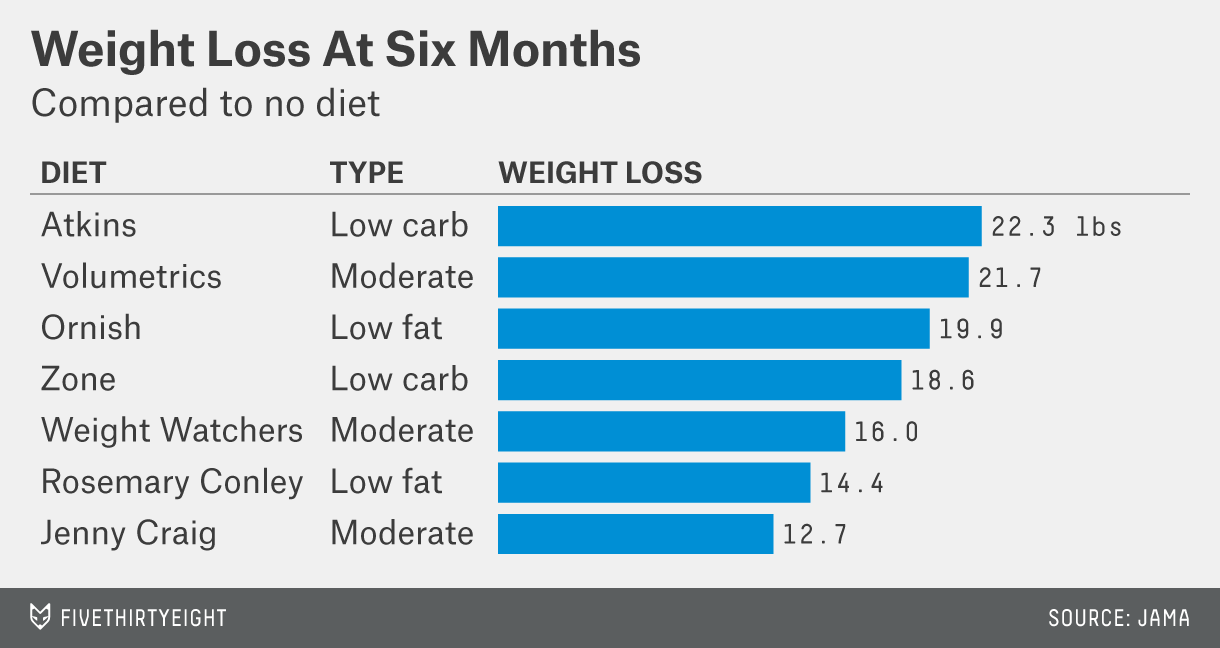 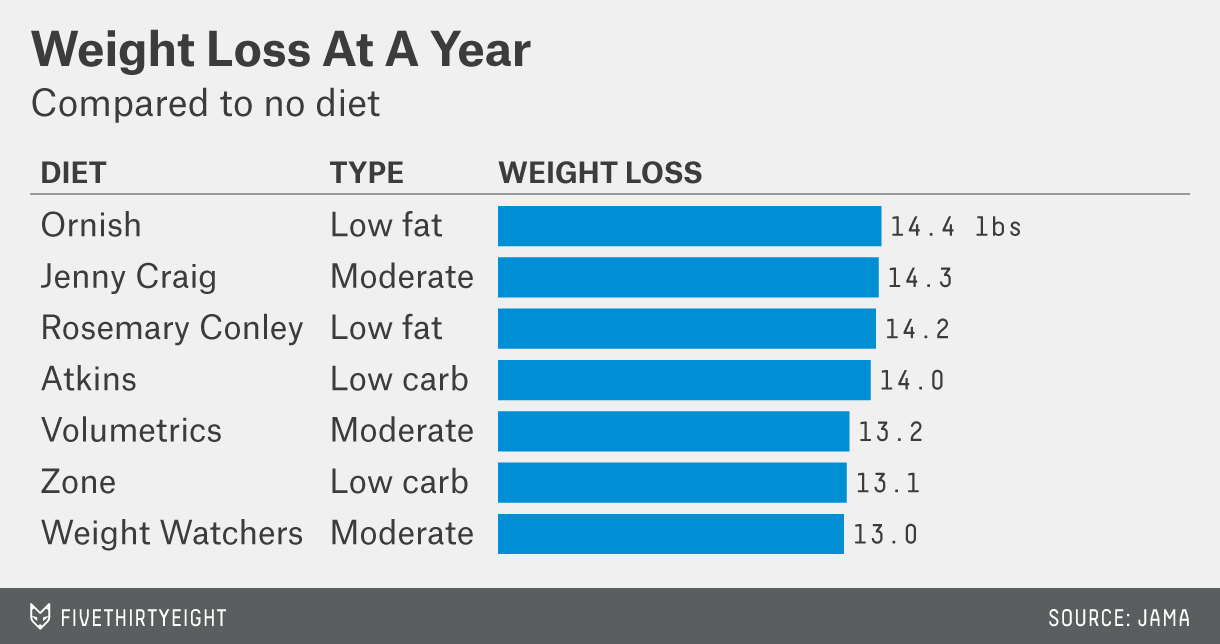 At six months, there seem to be some pretty big differences across diets. Atkins looks great, as does something called “volumetrics,” which is a “moderate macronutrient” diet that encourages eating vegetables and whole grains. Jenny Craig looks much worse. But by a year the differences are extremely minor, and the ranking across diets has changed. The best diet — although only by a tiny and certainly not statistically significant margin — is the Ornish diet, which is low fat.

So, if you had to pick a diet to maximize weight loss at one year, Ornish comes out on top by a hair.

But much more important is the observation that most people seem to find diets hard to maintain. For example, people on Atkins lose 22 pounds in the first six months, but gain about eight pounds back six months later. This means that the particular diet you choose is likely less important than choosing one you can actually stick to.

A final point: These studies focused only on weight loss, which is typically the primary focus of dieting, but may not be the only one. The JAMA analysis is silent on the question of whether different diets have varying benefits (or costs) other than weight loss.