What is the average height differential between men and women in heterosexual relationships?

As you know, I’ve already written back to ask why you were so curious about the height of romance — partly because I wanted to make sure I was using relevant data and partly because I’m just plain nosy. The information you provided is, I think, significant: You’re heterosexual, 5 feet 6 and came up with this question while you “and a fellow short friend were lamenting about heels.”

It turns out both of those are correct, but the number of inches we’re talking about is still pretty fascinating. What’s more, there are studies that show who’s choosing a partner based on height, why they’re doing it and how height differs in homosexual relationships.

Wanting to measure the height difference in existing couples (as opposed to people’s preferences for a partner — we’ll come to those later), researchers in the Netherlands used survey data from 12,502 couples who were the parents to babies born in the U.K. in 2000. Their peer-reviewed study, published online in 2013, found that in 92.5 percent of couples, the man was taller than the woman and that the average height difference was 14.1 centimeters, or 5.6 inches.

Men taller than women might be the norm, but you can see how many outliers there are and how far out they’re lying when you take a closer look at the data. Just 3.4 percent of couples were of the same height, and in 4.1 percent of couples, the woman was taller than the man. Even though men were on average almost half a foot taller than women, there was a big standard deviation of 9.3 centimeters (3.7 inches) either way. Here’s what those results look like when they’re charted out: 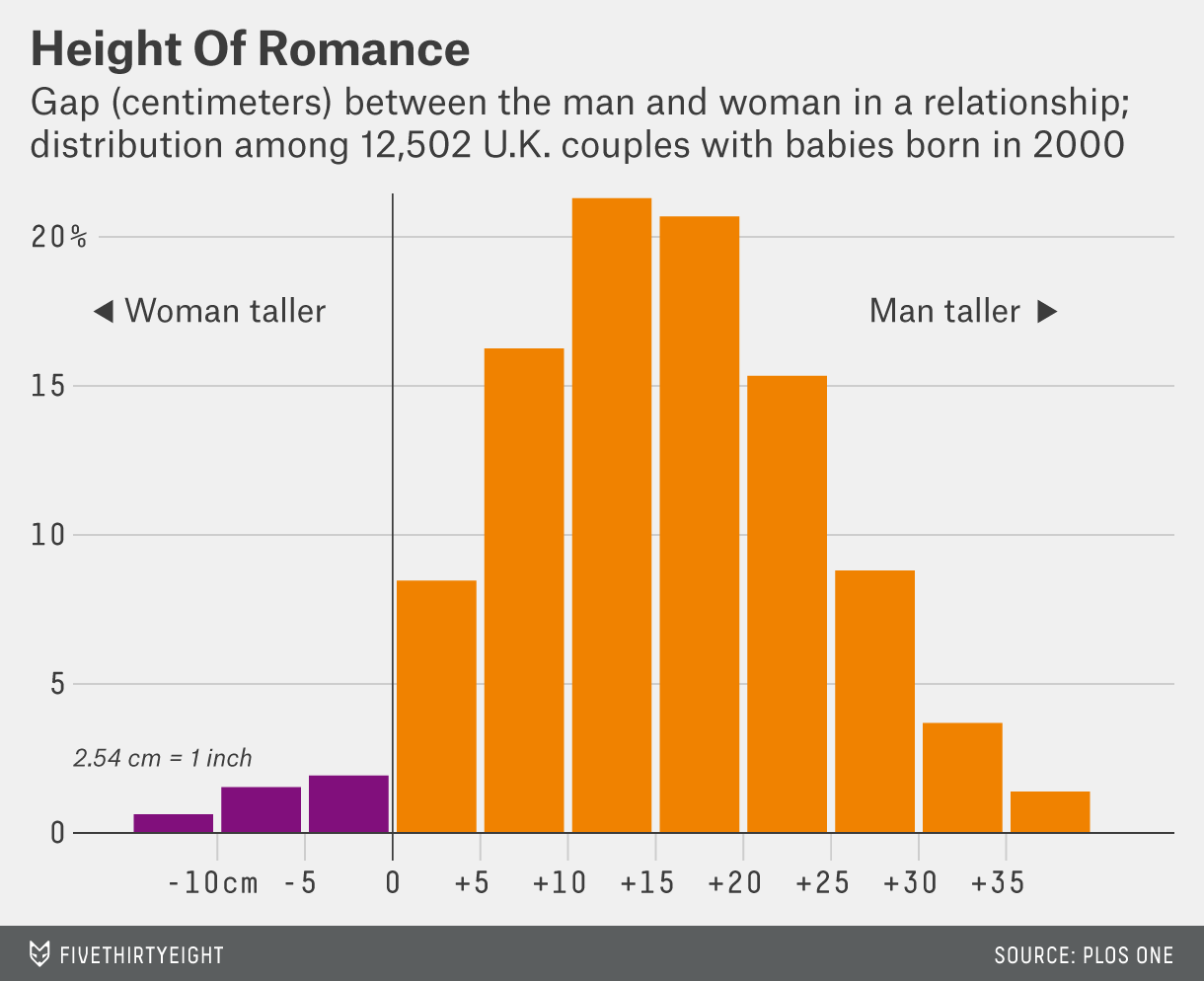 Things aren’t so different in the United States. In 2009, the Panel Study of Income Dynamics, a survey of more than 5,000 families by the University of Michigan, found that 92.2 percent of men were taller than their spouses (in 1986, that figure was 92.7 percent).

Despite that similarity, the findings from the study of U.K. couples might not be perfectly applicable to you. First, they’re only based on couples with children. Second, because height is related to ethnicity, the researchers only included white couples in their findings. Third, they couldn’t be sure of causality. Setting aside metaphysical questions about love, the researchers found that height is correlated with education, and there’s evidence that people choose partners based on their education level.

But there’s a bigger issue here — maybe you’ve already spotted it, John: Men tend to be taller than women anyway. Is it really so surprising that only 7.5 percent of heterosexual couples don’t include a man who is taller than a woman?

Yes, it is. The Dutch researchers checked this by seeing what would happen if they assigned couples together at random. If choice were out of their hands, 10.2 percent of heterosexual couples would have a man either the same height or shorter than the woman — the reality is 26 percent lower than that.

So, there seems to be some element of choice here. To find out who is doing the choosing, we need to look at a study published this year in the Journal of Family Issues. The authors looked at 925 personal ads of individuals in the U.S. seeking heterosexual relationships posted on Yahoo (they used data from the General Social Survey to weight those ads and make sure they were nationally representative in terms of age, geography, race, income, etc.).

Before you go critiquing women’s picky and primitive mating choices, I’d like to point you in the direction of abundant research that suggests that men choose female partners based on their waist-to-hip ratio. Unsurprisingly, physical attributes (either height or width) probably aren’t the smartest basis for choosing a partner. In fact, John, shorter men like you (the average height for a male adult in the U.S. is 5 feet 9) might be a real catch. A study published in the National Bureau of Economic Research in August found that shorter men tend to divorce at lower rates (though it also found that men who are shorter than their spouses do less housework than men who are taller than their spouses).

Your question might have been solely about heterosexual couples, but I wondered about the estimated 700,000 U.S. households headed by a same-sex couple. One of the first studies about the height preferences of homosexual couples was published in January. Researchers conducted an online survey of 541 gay men and found that about half preferred a partner to be taller than themselves, a quarter of respondents preferred to be of equal height and the rest liked partners shorter than themselves.

But the researchers found that those results were affected by how tall the respondent was in relation to the average — taller men preferred shorter partners while shorter men preferred taller partners. If dating is a game, then that sounds like a pretty sensible strategy doesn’t it?

It’s not only gay men who base their height preferences on their own height. A 2003 study published by the Royal Society found that height preferences were informed, at least in part, by pragmatism rather than some evolutionarily hard-wired instinct. When presented with a diagram of different height differentials (reproduced below), the 524 Polish students surveyed chose differently on the basis of their own height. Tall men and short women expressed a preference for a bigger difference in height than short men and tall women did. The author concluded that this preference strategy “allows them to increase the pool of potential partners and therefore their chances on the mate market.” 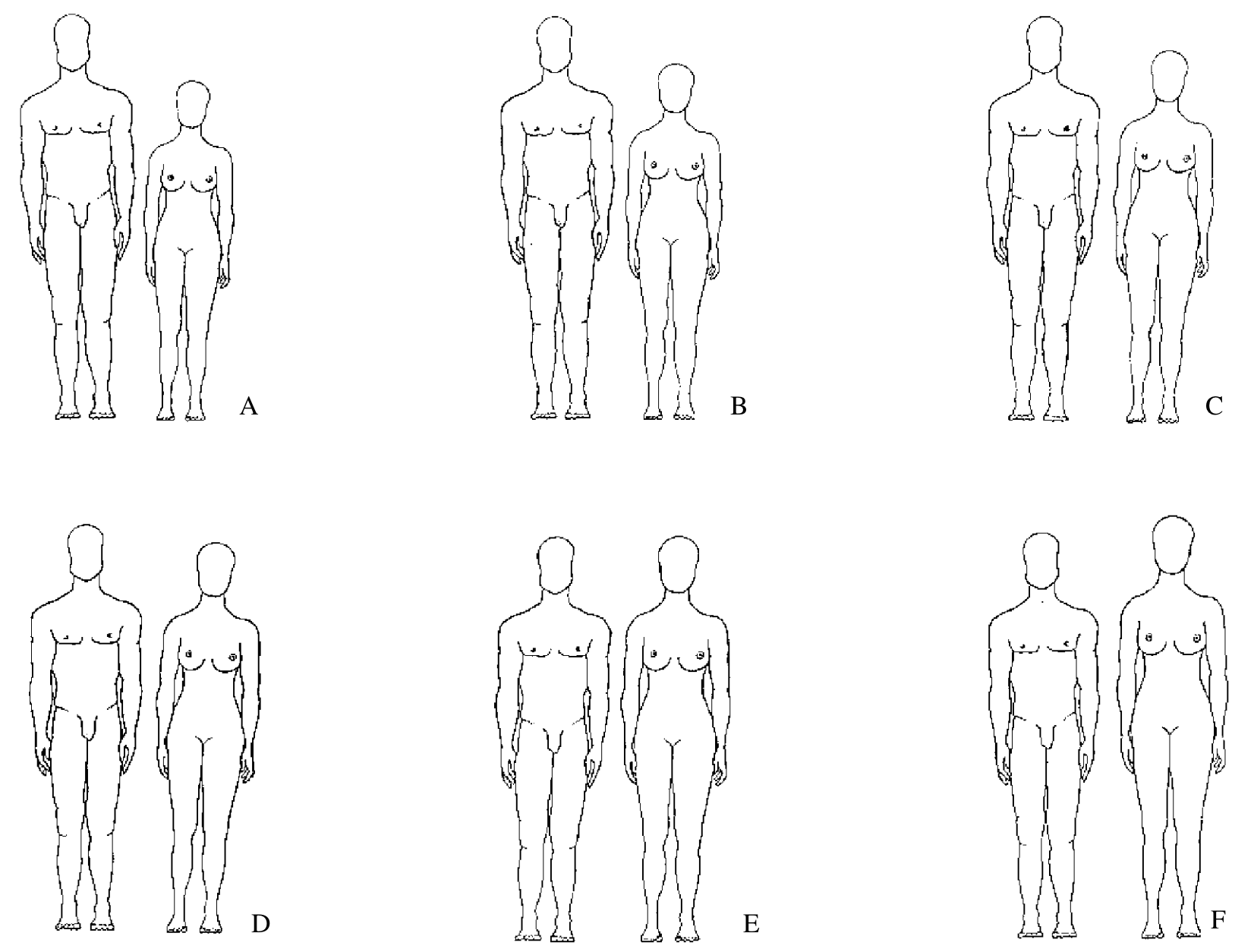 Finally, a warning for everyone who has a height preference and is looking for a partner online: People lie. Christian Rudder, one of the founders of OKCupid, used information from the dating site’s millions of users and concluded that men and women are probably 2 inches shorter than they claim to be. 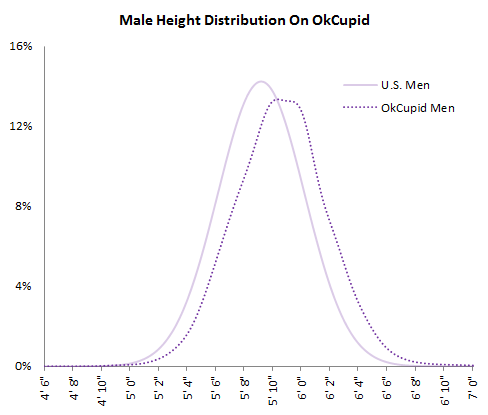 The long and short of it is that in heterosexual relationships, men tend to be taller than women and almost half of women prefer it that way. Don’t despair though, John, if you’re one of the 13.5 percent of men who are looking for a shorter female partner. You should know that the average height of a U.S. woman is 5 foot 4. That means there are plenty of possible matches out there for you (once they take off those lamentable heels).

CORRECTION (10:00 a.m., Dec. 5): A previous version of this article incorrectly said that if heterosexual couples were randomly assigned, the chance of the man being the same height or shorter than the woman would be 26 percent higher than it is in reality. That chance is 36 percent higher (10.2 percent vs. 7.5 percent) than it is in reality. However, the reality is also 26 percent lower than random chance, and an earlier version of this correction could have been read to say that the random chance of a man being shorter than his partner is 26 percent lower than the reality. You can see why we were confused.