I find research on wide hips interesting — not because it has any useful value in my life, but because it seems to be published on such a regular basis. The latest study, released this week, declared, “Women who predominantly engaged in one-night stand behavior had wider hips than those who did not.”

While reading the study though, a couple of other things emerge. First, the research, from the Institute of Psychological Sciences at the University of Leeds, was based on “148 female participants aged between 18 and 26 years … from around the University of Leeds and its environs.” It’s possible that 148 isn’t sufficient to make conclusions about “women.” And maybe women from Leeds have different sexual habits than women in London, or women in Los Angeles, for that matter.

Second, wider hips don’t exactly track with a higher share of one-night stands. Actually, the researchers found that women with a hip size of 33 to 34 centimeters were less likely to have had a one-night stand than those with hips measuring 31 to 32 centimeters. 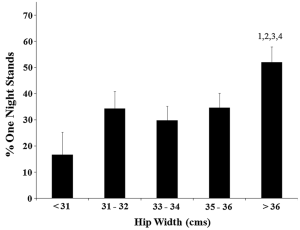 We’ve included the chart here. Sure, there is a big rise in the proportion of one-night stands for women with the widest hips (greater than 36 centimeters), but the paper doesn’t say how many of the 148 women fell into that category. The researchers also never told us the actual measurements of the women they analyzed, only that their hips varied from 28 to 46 centimeters (with an average hip width of 34.6 centimeters).

But what else has science told us lately about the importance of women’s hips? Plenty, although most of it has focused on men’s sexual preferences for women’s hips (which is odd, because research also shows that women tend to be the gatekeepers when it comes to sex). Here’s a roundup of a few recent hip studies; as you’ll see, the Leeds study wasn’t the only one with a small sample size:

Findings: Men were shown a photograph of a naked woman who had been digitally altered to change her breast size and waist-to-hip ratio. By tracking eye movements, the researchers found that the men “looked more often and for longer at the breasts,” but that ultimately an “hourglass shape and slim waist” were more important in determining their overall rating of the photograph’s attractiveness.
Participants in the study: “36 men of European descent, ranging in age from 22 to 42 years … from the post-graduate student body at Victoria University”
Year of publication: 2011
Source: Dixson, Grimshaw, Linklater and Dixson 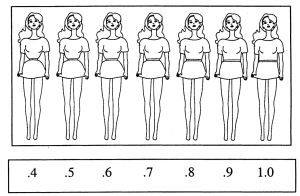 Findings: When researchers showed men “in a foraging society” drawings of women with different waist-to-hip ratios and asked them “to rank the drawings on attractiveness, health, and desirability as a wife,” they found that the men “preferred the heavy women to the normal women, and strongly disliked the two thin women, whom they labeled sickly.”
Participants in the study: “The Hadza are hunter-gatherers who live in a mixed-savanna woodland habitat in Tanzania.” Thirty-one men, ages 16 to 69, were included in the study, though the researchers mention that “as a control, we also asked U.S. college men.”
Year of publication: 2011
Source: Marlowe and Wetsman

Findings: When men were asked to rank the attractiveness of 10 photographs of rear-facing nude women, they found that men had a stronger preference for lower waist-to-hip ratios.
Participants in the study: “140 heterosexual male undergraduates”
Year of publication: 2010
Source: Perilloux, Webster and Gaulin 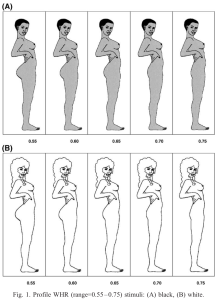 Findings: The scientists wanted to test the theory that evolutionary “selection has favored a universal male preference for a low female WHR” (waist-to-height ratio). To measure men’s preferences, they used (you guessed it) images, but they wanted to use profile views to understand male views on buttocks, as well as waists and hips. The study found that men’s preferences vary according to the shape of women where they live.
Participants in the study: The Hadza men again — this time, 110 of them, as well as 108 American men (Harvard undergraduates and men from the general population in and around Boston)
Year of publication: 2005
Source: Marlowe, Apicella and Reed