Late last week, New York Yankees designated hitter Alex Rodriguez added another milestone to what has been a renaissance of a 2015 season, joining the venerated 3,000-hit club with a home run against Detroit’s Justin Verlander. The accomplishment prompted much debate over whether A-Rod had tarnished the club with his history of using performance-enhancing drugs — and even whether such numbers can be meaningfully compared across different eras of baseball.

Call me naive, but when it comes to cross-era comparisons, I don’t think we have to give up the ball and head for the locker room. We can’t necessarily account for who used PEDs and who didn’t, but sabermetrics does have a long history of adjusting player stats for the environments in which they were produced. For instance, here’s a look at how easy it was to compare how many hits per plate appearance were made in the major leagues each season going back to 1901: 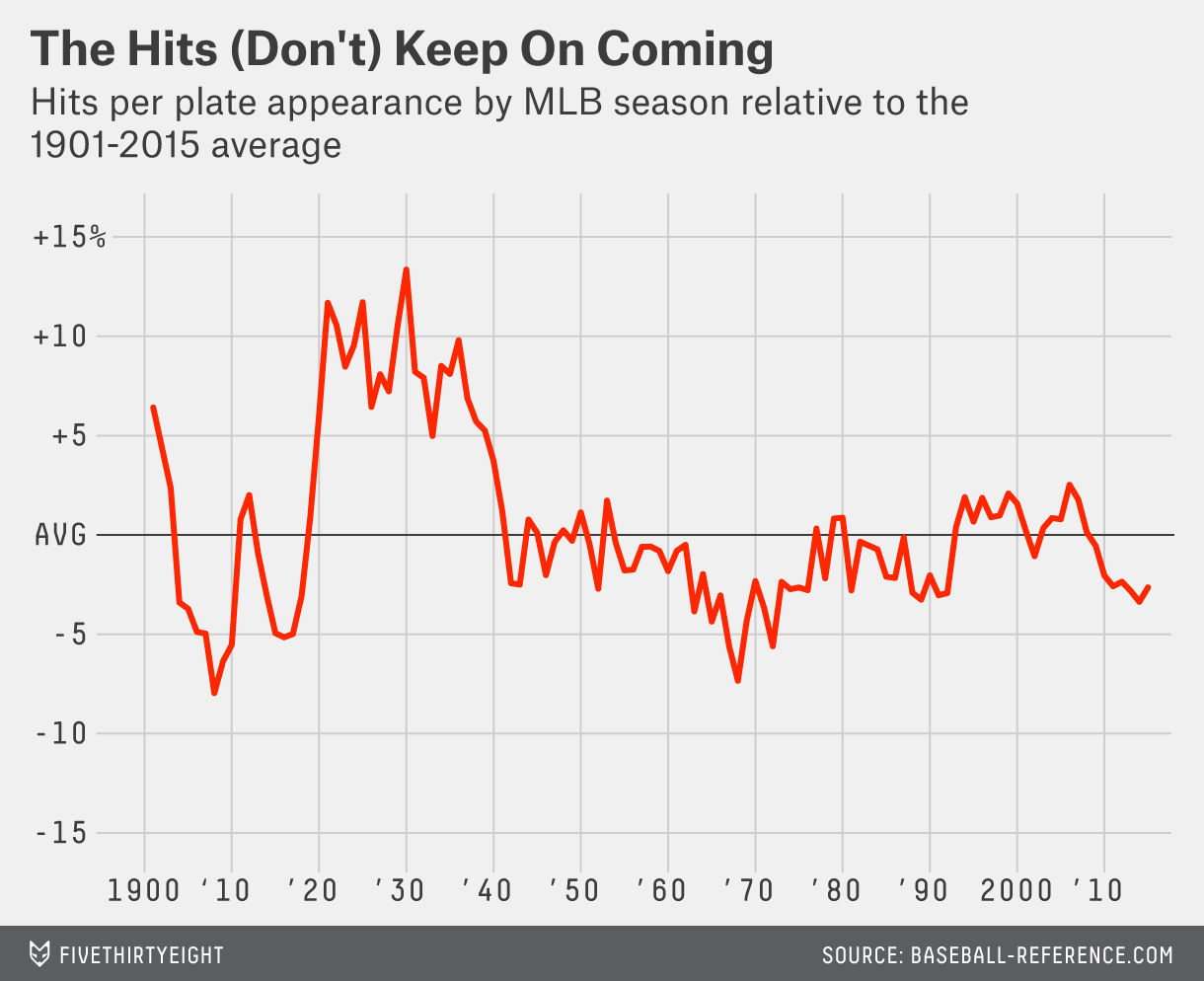 (The metric is indexed so that 100 represents the average hits-per-plate-appearance rate since 1901.)

By this accounting, Rodriguez’s hit total hasn’t been especially inflated by the era in which he played, relative to the entirety of MLB history. Early in his career, hits were easier to come by than the historical average, but a recent string of offensively suppressed seasons have brought A-Rod’s career hitting environment metric down to an almost perfectly average index of 100.3.

Of course, we can also adjust for schedule length — normalizing shorter seasons to 162 games — and park factors, both of which do cut into A-Rod’s raw hit count. Among members of the 3,000-hit club, only seven played in more favorable stadiums for hitters than Rodriguez has in his career, and only Derek Jeter and Lou Brock get less of a boost for playing fewer than 162 games per season than A-Rod does. (The schedule adjustment pro-rates Rodriguez’s hits upward by a mere 0.7 percent.)

After all of the adjustments are made for era, park and schedule, A-Rod loses 48 hits from his actual total. That’s not the most of any player — Coors Field lifer Todd Helton gets docked more than 356 hits — but it is enough to make A-Rod the only player currently in the 3,000-hit club who would not be a member under the adjusted hits metric. While he will probably hit his way into the adjusted club, too, before very long, the 48 hits he loses under the adjustments is the third most of any actual 3,000-hit club member, most of whom gained hits in the adjustment process.

So the critics are right, to a certain extent: Rodriguez has benefited from favorable conditions to join an elite statistical club. But the degree to which his numbers were inflated because of his era has been negligible — with the shortfall mainly owing to differences in park factors and schedule lengths — and he’s only 45 “adjusted hits” shy of 3,000 even after his numbers are tweaked.

There’s plenty of room to debate about how much to handicap Rodriguez’s numbers for his performance-enhancing drug use. But putting that aside, Rodriguez has outhit his peers practically as much as many other fellow 3,000-hit club member.