Home prices are rising at a slower rate than last year, and that’s at least partly because something new is driving the housing market, according to an updated report from Trulia, a real estate website. At the metro level, prices are being steered more by local jobs growth than a bounce back from price declines in the housing bust, Trulia said. The finding coincides with an update to Trulia’s Price Monitor, which tallies the asking price of homes, showing a 0.8 percent increase in July.

Last year, the factor most correlated with home prices was the peak-to-trough fall in those prices. In other words, prices cratered during the Great Recession, and much of their growth was simply reversion to the mean. That force has petered out, replaced by jobs. Jed Kolko, Trulia’s chief economist, demonstrated the tight correlation between jobs and home prices in the chart below. Although there are some notable outliers — including Detroit and Little Rock, Arkansas — the correlation is strong at 0.53. 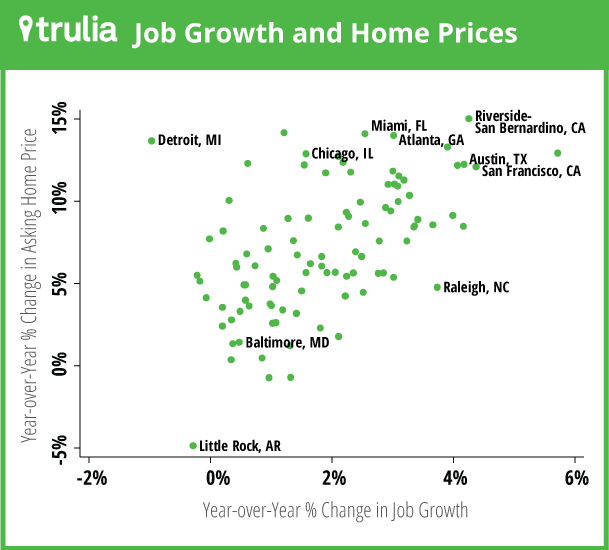 And it’s not just home prices, but rents, too, that are being boosted by jobs growth. Rents are up 6.1 percent nationwide, according to Trulia’s data; the areas with fastest-rising rents posted “solid to stellar” jobs growth. Kolko noted that, unlike home prices, rents “don’t necessarily” have a “rebound effect.”

This is to be expected, because “rebound effects” can’t last forever,and home prices have been on a tear for the past few years. Meanwhile, the national labor market is on a steady if not spectacular upward trajectory.

The consequence is a downshift into a more modest overall housing outlook, a complicating factor in monetary decisions by the Fed. A decelerating housing market is, now more than ever, just a function of good-but-not-great jobs growth.