For the first time since 1945, there will be no Wimbledon this year. And there’s no guarantee that the coronavirus pandemic won’t yet cancel the U.S. Open, scheduled to start in late August, and the French Open, which was postponed from May to September. If the rest of the 2020 tennis season is abandoned altogether, the title runs of two of the most dominant players in the history of the sport could be all but over.

Roger Federer and Serena Williams, both 38 years old, were already mired in small title slumps going into this season. Federer last won a Slam at the 2018 Australian Open, while Williams last won one in 2017, also in Melbourne. Williams, of course, was pregnant at the time; she then took a year off from the sport before returning to the majors at the 2018 French Open.

There had been signs, though, that both Williams and Federer might claim at least one more singles major. Williams made the finals at Wimbledon and the U.S. Open in both 2018 and 2019, and she looked dominant at times during those runs. Federer nearly won his ninth Wimbledon last July against Novak Djokovic: He needed one point at 40-15, on his serve, to take the title, but Djokovic came back to defeat him.

Wimbledon’s cancellation on its own was tough for the chances of both Federer and Williams to win again. Federer has won Wimbledon in 38 percent of his 21 appearances,1 while Williams has won seven of the 19 tourneys she’s played at the All England Club. Both were likely to have been among the Wimbledon favorites this year.

The two tennis legends were already fighting a race against time. Only seven majors in the Open era2 have been won by players at age 35 or older, including Federer’s three most recent and Williams’s one. If the last two majors of the season are also canceled but next season starts as normal, both players will go into the 2021 Australian Open as 39-year-olds — older than any player to have previously won a major. 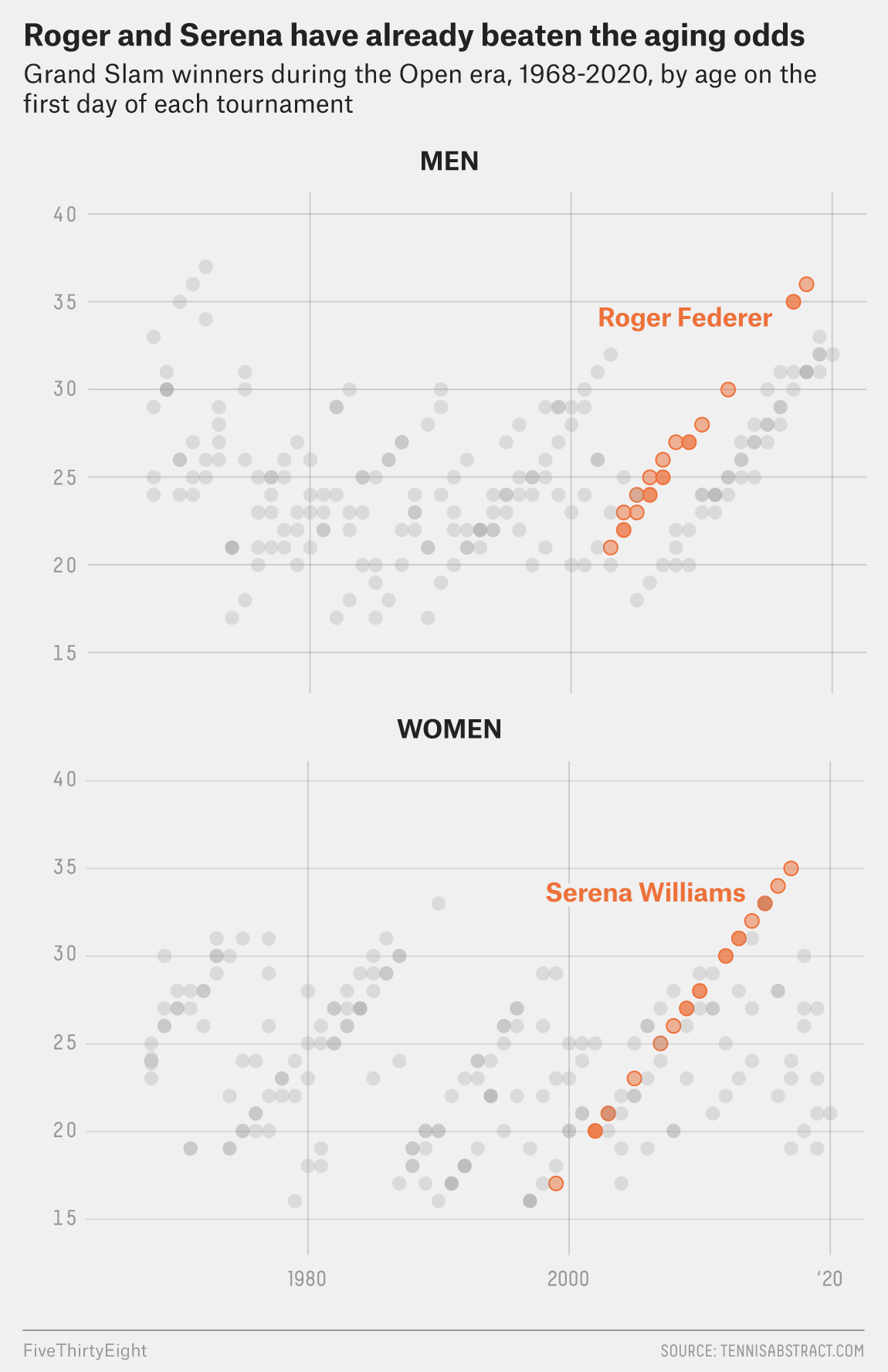 Williams has 23 Grand Slam singles titles, just one behind the 24 of all-time leader Margaret Court — though Court’s titles started before the Open era. Without this year’s tournaments, Williams may not get another good shot to tie Court. But unlike in men’s tennis, no current female player is within shouting distance of Williams’s total: The next closest active player in number of major titles is Serena’s sister, Venus Williams, who owns a mere seven — tied for 12th all-time and eighth in the Open era — and will turn 40 in June. No other active woman has more than the four of Kim Clijsters, who has just come out of retirement at age 36.

On the men’s side, however, Federer faces serious challengers to his record of 20 Slams. Rafael Nadal, with 19 titles, and Novak Djokovic, with 17, are hot on his heels — with time on their side. Djokovic won the Australian Open earlier this year at age 32 and has taken five of the past seven majors. And Nadal, still just 33, has won 12 of the 15 French Opens he has entered, including the past three, and he’s taken two of the past three U.S. Open titles. Given their form over the past two seasons, both appear likely to eclipse Federer’s record, but they would have a narrower window without this year’s tournaments. And even if the remaining two majors are played, the timing may be problematic, especially for Nadal: The French Open is set to start just a week after the final of the U.S. Open, so players who will have competed in New York will have very little time to prepare for the clay of Roland-Garros.

Cancellation of the season wouldn’t make things any easier for the men outside the Big Three, either. Andy Murray, who turns 33 in May, flirted with retirement last year after a hip injury before returning to the court, but a pelvic injury then kept him out of this year’s Australian Open. Would he wait until 2021 to try another return? Stan Wawrinka, 35, has won three Slam titles but has been in a dry spell since winning the U.S. Open in 2016. No man born after Marin Čilić has ever won a major, but the 31-year-old hasn’t made even a Slam semifinal since losing to Federer in the 2018 Australian Open final.

For the younger generation of players, these cancellations may simply present another obstacle to their efforts to break through. Of the men ranked in the ATP top 10 not named Federer, Nadal or Djokovic, Dominic Thiem has come the closest to winning a Slam: The 26-year-old made the last two French Open finals and the Australian Open finals this year. Daniil Medvedev, 24, is the only other top 10 player with a major final to his name.3 Someone other than the Big Three will win a major eventually, but he might not be among this group if too many opportunities are lost.

It’s still too early to tell whether the remaining majors this year will go on as planned. When tennis returns, Federer and Williams will continue to fight the tennis aging curve. The owners of two of the greatest collections of major title trophies in history will still be on the hunt for more — but with at least one fewer tournament at their disposal.