It took nearly three years, but Dominic Thiem is finally acting like a top 10 player. His reward has been his best tennis yet.

For years, Thiem played far more often than his peers. In 2016, when he first cracked the top 10, he played 82 matches, 17 percent more than the average of the end-of-season top 10 players. But now, a more mature and confident Thiem is designing his playing schedule more carefully, and his results on court have never been better.

The 26-year-old Austrian won a career-high five titles in 2019, including his first at the Masters 1000 level when he beat Roger Federer in March in Indian Wells. Thiem also made his second French Open final, and he beat Novak Djokovic at the season-ending ATP Finals in what he called “probably the best match I ever played.” He finished the season ranked a career-high No. 4, behind only Federer, Djokovic and Rafael Nadal.

“I think when I was younger, I needed [more matches]. It was tough for me to come to a big event without any matches before. I kind of was looking for getting confidence with some smaller events,” Thiem said in May. “But I’m also way more experienced now, so I can play the bigger events also without the smaller events before.”

As Thiem worked his way up to the top of the game, he had been the ATP Tour’s Ironman. In 2015, for instance, he rarely took a week off, playing in 30 tournaments, 48 percent more than the top 10 average of 20.3. That tied for eighth-most among players who finished the year ranked inside the top 100.

The play-often strategy can make sense. Sometimes players hop from tournament to tournament simply to play more matches and earn a better income. Lower-ranked players often lose earlier in tournaments, freeing up their schedules and allowing them to play more events.

But once Thiem reached No. 7 in June 2016, after his first Grand Slam semifinal at the French Open, he didn’t change his habits to reflect his ranking and conserve his body; he kept acting like a player still on the climb.

All the while, he defended the strategy.

“If I would have played less, I wouldn’t be here at the finals,” he said in November 2016 during his first appearance at the season-ending ATP Finals, where only the top eight players compete. “I think also the body and the mind and everything gets used to it.

“I think it’s really normal. I think that if I play the same amount of matches and tournaments next year, I will be used to it much better than this year.”

The aggressive schedule didn’t always hurt him. Most of the highest-ranked players spend the week before a Grand Slam practicing at the tournament site and getting used to the conditions. But in 2018, when Thiem made his first French Open final, he played a full week of matches the week before the tournament in Lyon, about 290 miles south of Paris, and won the ATP 250-level tournament.

“[It] was only four matches. And I feel physically completely fine, and the victory of the tournament helped for sure,” he said at the time. “I’m feeling great with a lot of confidence.”

But Thiem, who turned 26 in September, knows better now. He’s wary of adding any extra toll to his body, and he no longer needs more time on court to bolster his belief. 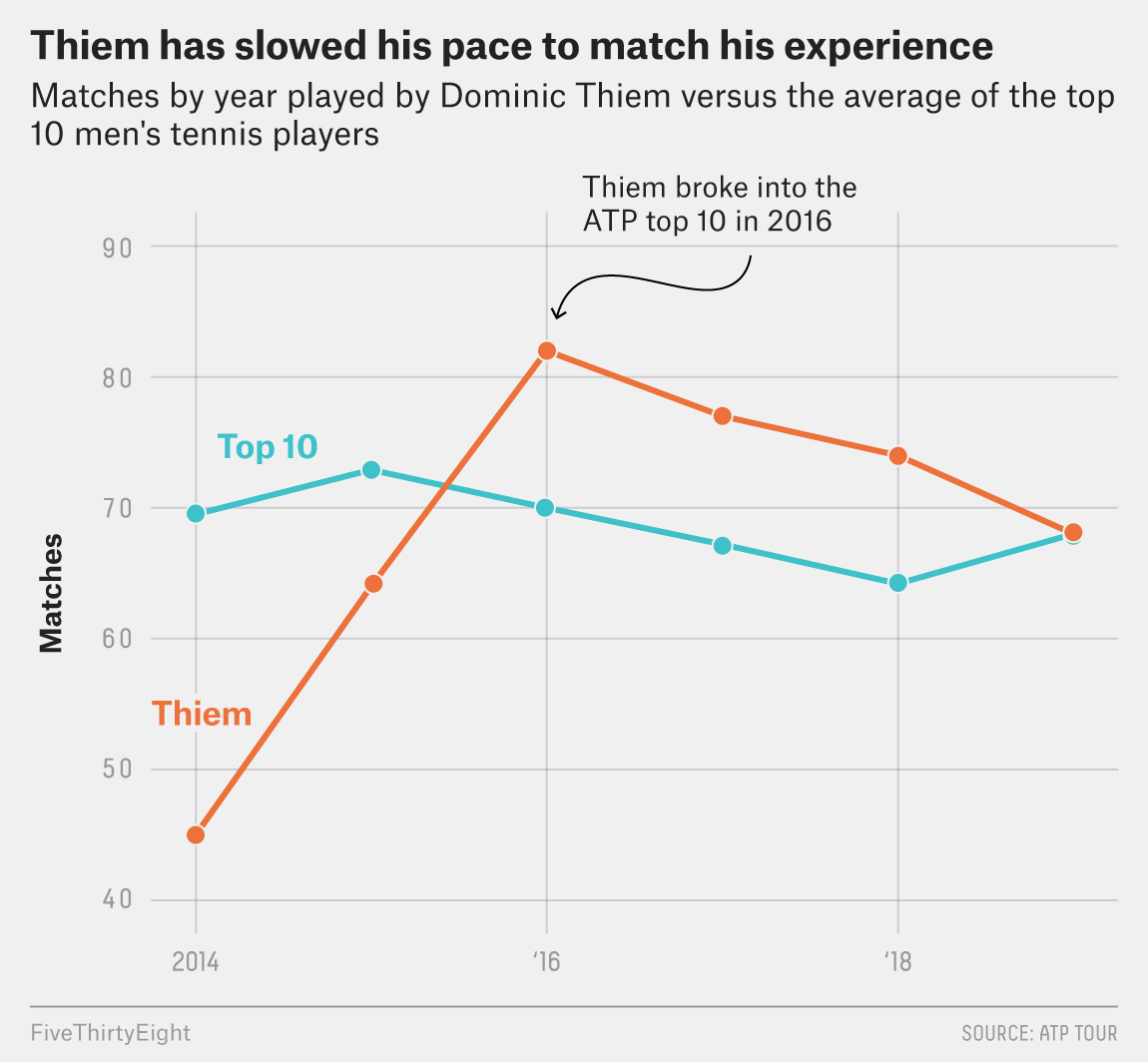 “I think with the age, I have to take little bit more care of myself,” Thiem said. “My goal is to play less tournaments, for sure, but to play well in every single tournament I play.”

Last year in Australia, even after time off between seasons, Thiem still felt worn down from his 2018 schedule. Suffering from an illness, he retired in the second round.

“I had a long season [in 2018]. It was very tough and long. Maybe I took off a little bit too short. I went almost straight to the offseason, which was again tough. That’s why I got ill in Australia,” he said in March.

Thiem is seeded fifth at the Australian Open, matching his 2018 seeding for his highest yet in Melbourne. He won his first-round match over Adrian Mannarino in straight sets. He is feeling fresh and confident at the start of the two-week tournament, which should help him thrive in the Australian summer — temperatures in past years have regularly climbed above 100 degrees Fahrenheit.

Thiem has never reached past the fourth round of the Australian Open. But the Austrian also has never been more physically prepared for the season’s first Grand Slam than he is right now.

Jonathon Braden is a freelance journalist based in Washington, D.C., who has covered tennis for the past 10 years. @jonathonbraden