At 5 p.m. on Tuesday, a gong will be struck at the Fox News headquarters in New York. At that moment, the five most recent national primary polls, “as recognized by FOX News,”1 will be averaged, and the top 10 Republican presidential candidates2 will get invites to the network’s prime-time debate Thursday, the first of the season. (Full disclosure: I don’t have any actual evidence that a gong will be used.)

So which candidates are likely to make the prime-time debate and which are destined for the “JV” event (if our assumptions about which pollsters Fox News will use for its average are correct)? To get a sense for just how random the results can be depending on where you draw the line, we looked at the current five-poll average — as if the debate were being held Aug. 1 — as well as the previous four times the average was updated as new polls came out. A new poll has been released every few days3 over the past few weeks. These averages reveal that some candidates are basically shoo-ins; others are very unlikely to make the cut. Then there are the “on the bubble” candidates, in one day and out the next. For them, who gets in to the prime-time debate will likely be as much about luck as about where they truly stand with Republican voters. 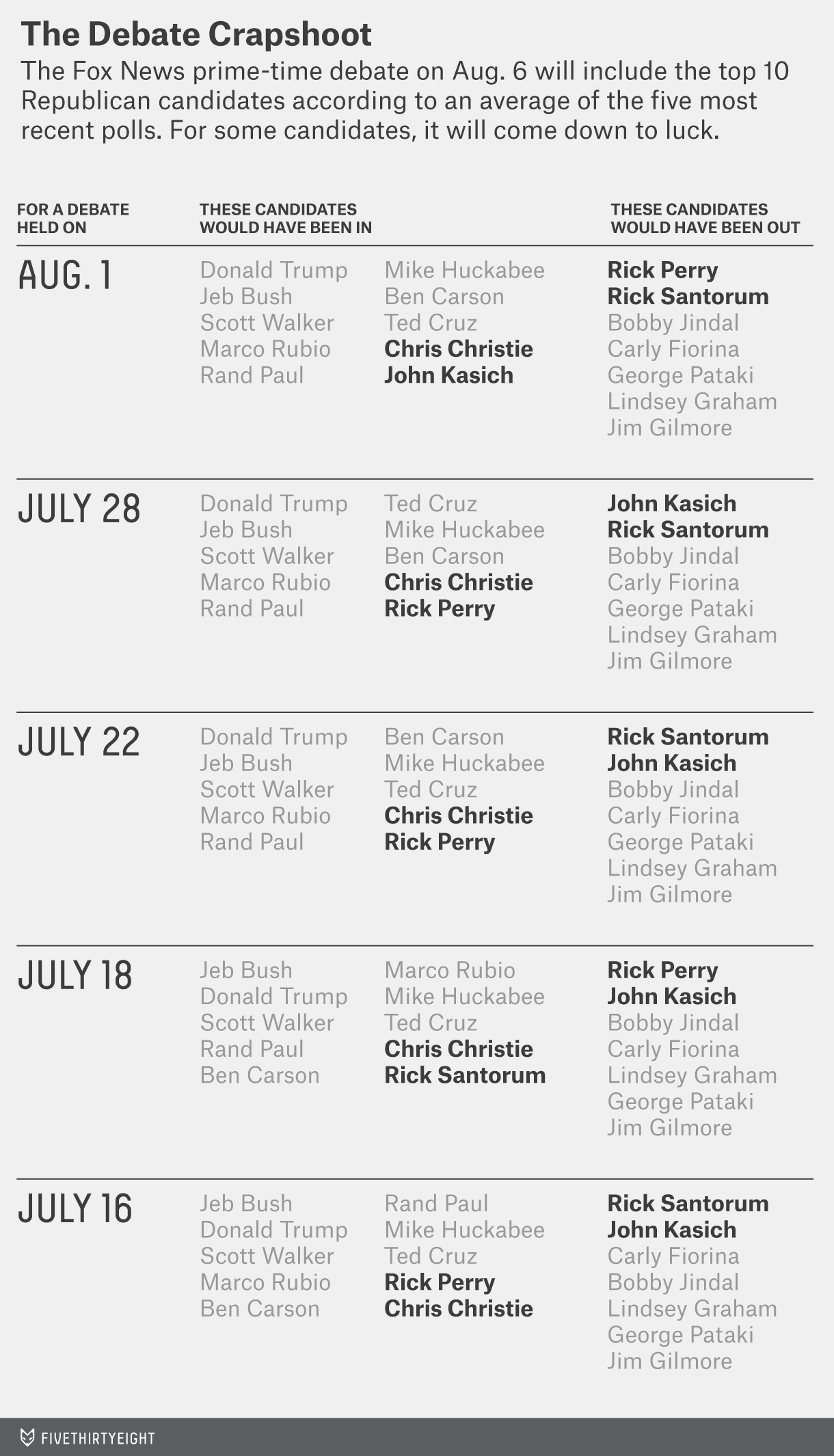 These candidates represent the top eight in the current polling average, and their numbers have been fairly consistent in the last five iterations of the five-poll average. That is, their percentage of the vote has clearly put them in the top 10 as new polls have been added and old ones taken out. All eight of these candidates have managed to stay at 5 percent or higher in the average.

Christie has been in ninth or 10th place in each of the last five polling averages, but he’s currently only 0.6 percentage points ahead of Perry, who wouldn’t make the cut. (3.0 percent vs. 2.4 percent).

Kasich has been climbing in the polls since he announced that he was running for president on July 21, although he could easily fall back. The range of his five poll averages (1.6 percent to 2.8 percent) is the widest for any candidate polling below 5 percent.4

Perry has occupied the 10th spot in three of the last five iterations of the polling average. Now he’s in 11th place. If Perry rises by a few tenths of a percentage point, or if Kasich falls back, Perry has a chance.

Santorum’s chances of making the debate look fleeting if Fox News doesn’t round the averages — for example, from 1.6 percent, where Santorum sits currently, to 2 percent. To make the debate, he would need to tie or better his high-water mark (2.4 percent) over the last five averages and would need Kasich or Christie to fall back.

Only Jindal is polling above 1 percent, and the other candidates in this group haven’t gotten above 1.6 percent in the past five polling averages. In fact, no one in this group has even gotten more than 2 percent in any of the last seven individual live-interview polls taken.