An article I wrote earlier this week argued that the increase in natural disaster property losses in recent years can be explained by the world’s increasing wealth, not by climate change. Measured as a proportion of gross domestic product, these costs haven’t changed much over the past quarter-century.

The article generated a lot of comments and questions, and I thought it would be good to address some of them. Human-caused climate change is both real and important, so being careful about what claims science can support and which it can’t is imperative.

Several readers wanted to know how the data looked restricted to only those disasters related to weather events. Others asked about the data going back to 1980. Answers to these questions can be seen in the graph below: 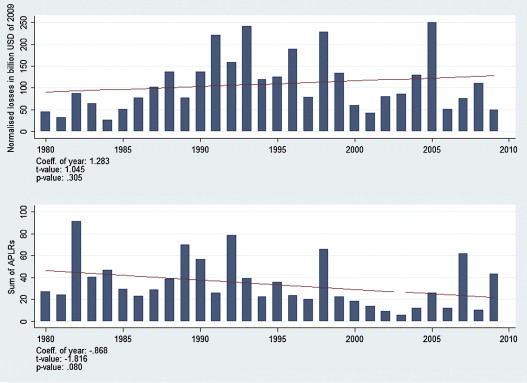 The data, from an analysis of the Munich Re disaster data set by two scholars at the London School of Economics, shows the trend in weather-related disaster losses as a proportion of global GDP since 1980. The study used two methods to adjust for global GDP, a simple approach like the one I presented in my article, and a far more sophisticated method which used much more localized and precise data on GDP. The authors conclude (emphasis added):

For the purpose of detecting a climate change signal, it makes no sense to include loss from all natural disasters since some disaster types will be practically unaffected by climate change. In [the figure], we therefore have taken out geophysical disasters (earthquakes, land slides, rock falls, subsidence, volcanic eruptions, and tsunamis) and only include the following disaster types: blizzards, hail storms, lightning, local windstorms, sandstorms, tropical cyclones, severe storms, tornados, winter storms, avalanches, flash floods, general floods, storm surges, cold and heat waves, droughts, winter damages, and wildfires. Both methods lead to the same result as for all disasters: no significant trend over time according to conventional method, a marginally significant downward trend according to the alternative method.

According to the conventional method, from 1980 the trend is slightly positive. Using the authors’ alternative method, the trend from 1980 is modestly negative. Under both methods the trend is negative from 1990.

I wouldn’t read much if anything into the trends up or down. None of them is statistically significant. The time period is short and the occurrences of extreme events — weather-related or otherwise — are highly variable.

Still, looked at this way, as the analysis concludes, there isn’t evidence here to support claims that increasing disaster costs are driven by more frequent or intense weather events. It’s climate data, not catastrophe loss data, that can best suggest changes in extreme weather events.

One final note: Other readers raised questions about the role of technological change — such as evolving building practices — and its effects on disaster losses over time. This subject is well addressed in the literature, and has been deemed important in damage trends with respect to Australian cyclone damage and U.S. earthquakes, for instance, but not for floods, U.S. hurricanes or tornadoes.